In this paper, we consider testing the homogeneity for proportions in independent binomial distributions especially when data are sparse for large number of groups. We provide broad aspects of our proposed tests such as theoretical studies, simulations and real data application. We present the asymptotic null distributions and asymptotic powers for our proposed tests and compare their performance with existing tests. Our simulation studies show that none of tests dominate the others, however our proposed test and a few tests are expected to control given sizes and obtain significant powers. We also present a real example regarding safety concerns associated with Avandiar (rosiglitazone) in Nissen and Wolsky (2007). 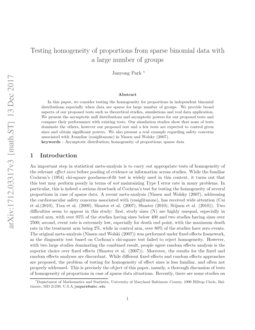 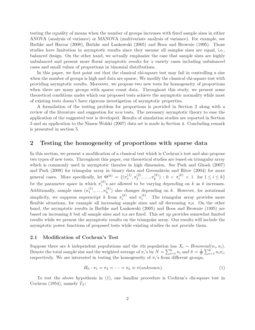 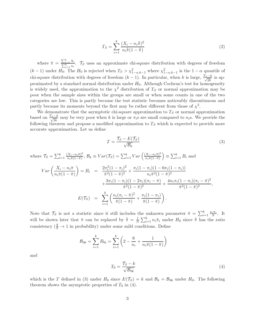 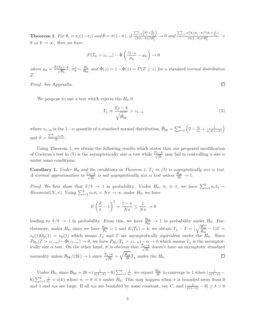 An important step in statistical meta-analysis is to carry out appropriate tests of homogeneity of the relevant effect sizes before pooling of evidence or information across studies. While the familiar Cochran’s (1954) chi-square goodness-of-fit test is widely used in this context, it turns out that this test may perform poorly in terms of not

maintaining Type I error rate in many problems. In particular, this is indeed a serious drawback of Cochran’s test for testing the homogeneity of several proportions in case of sparse data. A recent meta-analysis (Nissen and Wolsky (2007), addressing the cardiovascular safety concerns associated with (rosiglitazone), has received wide attention (Cai et al.(2010), Tian et al. (2009), Shuster et al. (2007), Shuster (2010), Stijnen et al. (2010)). Two difficulties seem to appear in this study: first, study sizes (N) are highly unequal, especially in control arm, with over

of the studies have zero events. The original meta-analysis (Nissen and Wolski (2007)) was performed under fixed effects framework, as the diagnostic test based on Cochran’s chi-square test failed to reject homogeneity. However, with two large studies dominating the combined result, people agree random effects analysis is the superior choice over fixed effects (Shuster et al. (2007)). Moreover, the results for the fixed and random effects analyses are discordant. While different fixed effects and random effects approaches are proposed, the problem of testing for homogeneity of effect sizes is less familiar, and often not properly addressed. This is precisely the object of this paper, namely, a thorough discussion of tests of homogeneity of proportions in case of sparse data situations. Recently, there are some studies on testing the equality of means when the number of groups increases with fixed sample sizes in either ANOVA (analysis of variance) or MANOVA (multivariate analysis of variance). For example, see Bathke and Harrar (2008), Bathke and Lankowski (2005) and Boos and Brownie (1995). Those studies have limitation in asymptotic results since they assume all samples sizes are equal, i.e., balanced design. On the other hand, we actually emphasize the case that sample sizes are highly unbalanced and present more fluent asymptotic results for a variety cases including unbalanced cases and small values of proportions in binomial distributions.

In this paper, we first point out that the classical chi-square test may fail in controlling a size when the number of groups is high and data are sparse. We modify the classical chi-square test with providing asymptotic results. Moreover, we propose two new tests for homogeneity of proportions when there are many groups with sparse count data. Throughout this study, we present some theoretical conditions under which our proposed tests achieve the asymptotic normality while most of existing tests doesn’t have rigorous investigation of asymptotic properties.

A formulation of the testing problem for proportions is provided in Section 2 along with a review of the literature and suggestion for new tests. The necessary asymptotic theory to ease the application of the suggested test is developed. Results of simulation studies are reported in Section 3 and an application to the Nissen-Wolski (2007) data set is made in Section 4. Concluding remark is presented in section 5.

2 Testing the homogeneity of proportions with sparse data

In this section, we present a modification of a classical test which is Cochran’s test and also propose two types of new tests. Throughout this paper, our theoretical studies are based on triangular array which is commonly used in asymptotic theories in high dimension. See Park and Ghosh (2007) and Park (2009) for triangular array in binary data and Greenshtein and Ritov (2004) for more general cases. More specifically, let Θ(k)={(π(1)1,π(2)2,…,π(k)k):0<π(k)i<1  for 1≤i≤k} be the parameter space in which π(k)is are allowed to be varying depending on k as k increases. Additionally, sample sizes (n(1)1,…,n(k)k) also changes depending on k. However, for notational simplicity, we suppress superscript k from π(k)i and n(k)i. The triangular array provides more flexible situations, for example all increasing sample sizes and all decreasing πis. On the other hand, the asymptotic results in Bathke and Lankowski (2005) and Boos and Brownie (1995) are based on increasing k but all sample sizes and πis are fixed. This set up provides somewhat limited results while we present the asymptotic results on the triangular array. Our results will include the asymptotic power functions of proposed tests while existing studies do not provide them.

Suppose there are k independent populations and the ith population has Xi∼Binomial(ni,πi). Denote the total sample size and the weighted average of πi’s by N=∑ki=1ni and ¯π=1N∑ki=1niπi, respectively. We are interested in testing the homogeneity of πi’s from different groups,

To test the above hypothesis in (1), one familiar procedure is Cochran’s chi-square test in Cochran (1954), namely TS:

uses an approximate chi-square distribution with degrees of freedom

is approximated by a standard normal distribution under

H0. Although Cochran’s test for homogeneity is widely used, the approximation to the χ2 distribution of TS

or normal approximation may be poor when the sample sizes within the groups are small or when some counts in one of the two categories are low. This is partly because the test statistic becomes noticeably discontinuous and partly because its moments beyond the first may be rather different from those of

in probability) under some mild conditions. Define

which is the T defined in (3) under H0 since E(TS)=k and Bk=B0k under H0. The following theorem shows the asymptotic properties of T0 in (4).

We propose to use a test which rejects the H0 if

Using Theorem 1, we obtain the following results which states that our proposed modification of Cochran’s test in (5) is the asymptotically size α test while TS−k√2k may fail in controlling a size α under some conditions.

In addition to the modified Cochran’s test Tχ, we also propose new tests designed for sparse data when k is large. Similar to the asymptotic normality of Tχ, it will be justified that our proposed tests have the asymptotic normality when k→∞ although nis are not required to increase. Towards this end, we proceed as follows. Let ||\boldmathπ−\boldmath¯π||2n=∑ki=1ni(πi−¯π)2 which is weighted l2 distance from \boldmathπ=(π1,π2,…,πk) to \boldmath¯π=(¯π,¯π,…,¯π) where n=(n1,…,nk). The proposed test is based on measuring the ||\boldmathπ−\boldmath¯π||2n

. Since this is unknown, one needs to estimate the

which is an unbiased estimator of

||\boldmathπ−\boldmath¯π||2n. This implies E(T)=||\boldmathπ−\boldmath¯π||2n≥0 and ”=” holds only when H0 is true. Therefore, it is natural to consider large values of T as an evidence supporting H1, and we thus propose a one-sided (upper) rejection region based on T for testing H0. Our proposed test statistics are based on T of which the asymptotic distribution is normal distribution under some conditions.

We derive the asymptotic normality of a standardized version of T under some regularity conditions. Let us decompose T into two components, say T1 and T2:

We now derive the asymptotic null distribution of T1√Var(T1) and propose an unbiased estimator of Var(T1) which has the ratio consistency property. We first compute Var(T1) and then propose an estimator ˆVar(T1).

V1 in (10) and V1∗ in (11) are equivalent under the H0, however the estimators may be different depending on whether θis are estimated individually from xi or the common value π is estimated in V1∗ by the pooled estimator ^π. We shall consider consider these two approaches for estimating V1 and V1∗.

For sequences of an(>0) and bn(>0), let us define an≍bn if 0<liminfanbn≤limsupanbn<∞. The following lemmas will be used in the asymptotic normality of the proposed test.

We provide another lemma which plays a crucial role in the proof of the main result. As mentioned, we have two types of variances such as V1 in (10) and V1∗ in (11) and their estimators ˆV1 and ˆV1∗. For T1 in (8

), we consider two types of standard deviations based on

where C and C′ are universal constants which do not depend on π and n.

The following lemma shows that ^V1 and ^V1∗ have the ratio consistency under some conditions.