We construct a procedure to test the stochastic order of two samples of interval-valued data. We propose a test statistic which belongs to U-statistic and derive its asymptotic distribution under the null hypothesis. We compare the performance of the newly proposed method with the existing one-sided bivariate Kolmogorov-Smirnov test using real data and simulated data. 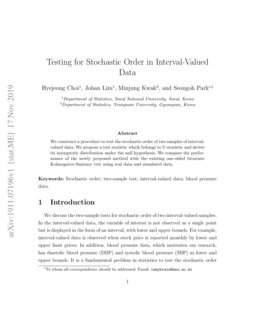 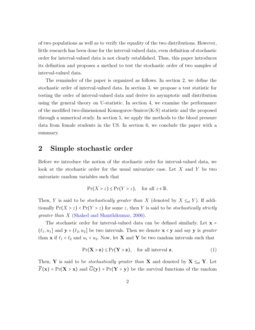 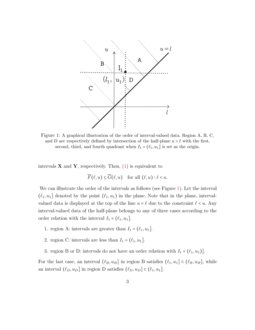 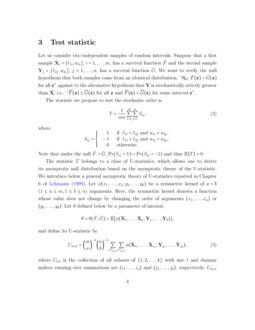 The remainder of the paper is organized as follows. In section 2, we define the stochastic order of interval-valued data. In section 3, we propose a test statistic for testing the order of interval-valued data and derive its asymptotic null distribution using the general theory on U-statistic. In section 4, we examine the performance of the modified two-dimensional Komogorov-Smirov(K-S) statistic and the proposed through a numerical study. In section 5, we apply the methods to the blood pressure data from female students in the US. In section 6, we conclude the paper with a summary.

be two univariate random variables such that

The stochastic order for interval-valued data can be defined similarly. Let x=(ℓ1,u1] and y=(ℓ2,u2] be two intervals. Then we denote x<y and say y is greater than x if ℓ1<ℓ2 and u1<u2. Now, let X and Y be two random intervals such that

Then, Y is said to be stochastically greater than X and denoted by X≤stY. Let ¯¯¯¯F(x)=Pr(X>x) and ¯¯¯¯G(y)=Pr(Y>y) be the survival functions of the random intervals X and Y, respectively. Then, (1) is equivalent to

The statistic we propose to test the stochastic order is

The statistic T belongs to a class of U-statistics, which allows one to derive its asymptotic null distribution based on the asymptotic theory of the U-statistic. We introduce below a general asymptotic theory of U-statistics reported in Chapter 6 of Lehmann (1999). Let ϕ(x1,…,xa;y1,…,yb) be a symmetric kernel of a+b (1≤a≤m,1≤b≤n) arguments. Here, the symmetric kernel denotes a function whose value does not change by changing the order of arguments (x1,…,xa) or (y1,…,yb). Let θ defined below be a parameter of interest;

and define its U-statistic by

is an unbiased estimator of

and its variance is

where σ2ij is given by

and X′i and Y′j are independent copies of Xi and Yj. The theorem below from Chapter 6 of Lehmann (1999) explains the asymptotic distribution of the U-statistic (3) above.

Applying the general theory above for U-statistics to our case, we can derive the asymptotic null distribution of our T statistic.

Parameters θ1,θ2,θ3 used to compute the asymptotic variance can be approximated by permuting observations within each sample. To understand it, we observe the followings.

where X,X′,X′′ are independent random intervals from the first population. Consequently, θ1 can be approximated by

Equation (4) has an implication that the above approximation would be a valid estimate of θ1 even under the alternative hypothesis.

Therefore, by applying Theorem 1, we have

Hence, the asymptotic variance of √NT(=√NUm,n) is

In the study, to generate interval-valued data (L,U], we consider a transformation to obtain C=(L+U)/2 and half-range R=(U−L)/2. We consider two underlying distributions for (C,logR); bivariate normal distribution and bivariate t

distribution with the degrees of freedom

For two populations, we consider Π1 and Π2 parameterized as follows;

Table 1 shows some interesting findings with regard to the proposed U-test. First, the power of our U-test is higher than the one-sided K-S test in all cases under consideration regardless of the magnitude of ρ

. Also, it is noted that when it comes to U-test, the powers based on a permutation method and asymptotic results are almost same in all cases, which proves the asymptotic result and its accuracy. Third, the greater the correlation between center and range, the higher power of each test we can get. This phenomenon can be explained using the Mahalanobis distance between two mean vectors from the null and the alternative. The distance is

In this section, we apply the stochastic order tests to a real dataset. The data we use is obtained from National Heart, Lung, and Blood Institute Growth and Health Study (NGHS), which is a 10-year cohort study to evaluate the temporal trends of cardiovascular risk factors, such as systolic and diastolic blood pressures (SBP, DBP) based on annual visits of 2,379 African-American and Caucasian girls. The blood pressure (BP) data, which is measured at two levels, can be an example of the MM-type interval-valued data. In this analysis, we only use BP measurements at the first visit and remove subjects with missing values. After all, the total number of subjects is N=2,256, where Caucasians and African-American girls are m=1,112 and n=1,144, respectively. The goal of this application is to test a hypothesis “BP of African-American is stochastically greater than that of Caucasian girls”.

Table 2 shows that SBP, DBP, and their center are significantly higher in African-American than in Caucasian. Meanwhile, it is confirmed that there is no difference in the range between two groups. These results are very similar to the setting of the numerical study, where centers of two groups are similar, but ranges are different.

In this paper, we introduce the notion of stochastic order between two samples of interval-valued data and propose a test statistic based on U-statistic. We compute the asymptotic null distribution of the proposed statistic. The numerical study shows that the asymptotic distribution approximates the null distribution with accuracy, even with small size of samples. Also, the proposed test has higher power than the one-sided bivariate KS test in all cases we consider. Therefore, it can be said that the procedure proposed in this paper is of great use for testing the order of interval-valued data.

Authors want to inform that this manuscript is an English version of the article written in Korean and accepted at The Korean Journal of Applied Statistics.

We would like to show our gratitude to two anonymous reviewers and the editor of The Korean Journal of Applied Statistics for their detailed and instructive comments.