In this paper, we consider the problem of testing for exponentiality against univariate positive ageing when the underlying sample consists of stationary associated random variables. In particular, we discuss the asymptotic behavior of the tests by Deshpande (1983), Hollander and Proschan (1972) and Ahmad (1992) for testing exponentiality against IFRA, NBU and DMRL, respectively under association. A simulation study illustrates the effect of dependence on the asymptotic normality of the test statistics and on the size and power of the tests. 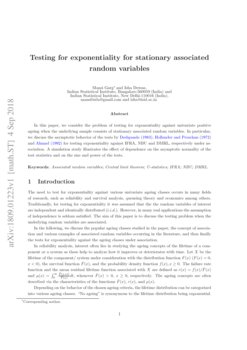 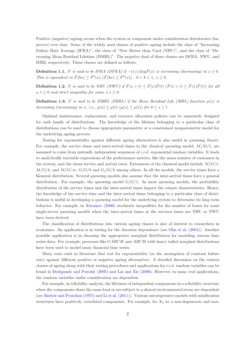 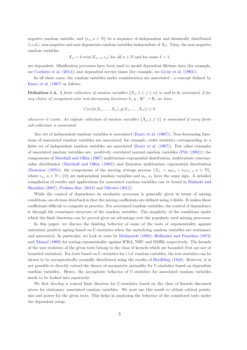 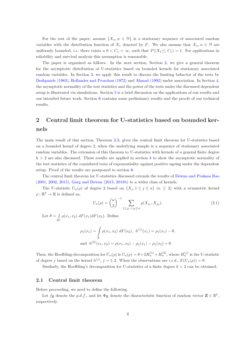 The need to test for exponentiality against various univariate ageing classes occurs in many fields of research, such as reliability and survival analysis, queueing theory and economics among others. Traditionally, for testing for exponentiality it was assumed that the the random variables of interest are independent and identically distributed (i.i.d.). However, in many real applications the assumption of independence is seldom satisfied. The aim of this paper is to discuss the testing problem when the underlying random variables are associated.

In the following, we discuss the popular ageing classes studied in the paper, the concept of association and various examples of associated random variables occurring in the literature, and then finally the tests for exponentiality against the ageing classes under association.

In reliability analysis, interest often lies in studying the ageing concepts of the lifetime of a component or a system as these help to analyze how it improves or deteriorates with time. Let X be the lifetime of the component/ system under consideration with the distribution function F(x) (F(x)=0, x<0), the survival function ¯F(x)

, and the probability density function

f(x),x≥0. The failure rate function and the mean residual lifetime function associated with X are defined as r(x)=f(x)/¯F(x) and μ(x)=∫∞0¯F(x+t)¯F(x)dt, whenever ¯F(x)>0, x≥0, respectively. The ageing concepts are often described via the characteristics of the functions ¯F(x), r(x), and μ(x).

Depending on the behavior of the chosen ageing criteria, the lifetime distribution can be categorized into various ageing classes. “No ageing” is synonymous to the lifetime distribution being exponential. Positive (negative) ageing occurs when the system or component under consideration deteriorates (improves) over time. Some of the widely used classes of positive ageing include the class of “Increasing Failure Rate Average (IFRA)”, the class of “New Better than Used (NBU)”, and the class of “Decreasing Mean Residual Lifetime (DMRL)”. The negative dual of these classes are DFRA, NWU, and IMRL respectively. These classes are defined as follows.

Optimal maintenance, replacement, and resource allocation policies can be separately designed for each family of distributions. The knowledge of the lifetime belonging to a particular class of distributions can be used to choose appropriate parametric or a constrained nonparametric model for the underlying ageing process.

Testing for exponentiality against different ageing alternatives is also useful in queueing theory. For example, the service times and inter-arrival times in the classical queueing model, M/M/1, are assumed to come from mutually independent sequences of i.i.d. exponential random variables. It leads to analytically tractable expressions of the performance metrics, like the mean number of customers in the system, and the mean service and arrival rates. Extensions of the classical model include M/G/1, M/G/k, and M/G/∞, G/G/k and Gt/G/k among others. In all the models, the service times have a General distribution. Several queueing models also assume that the inter-arrival times have a general distribution. For example, the queueing model G/G/1

. In most queueing models, the probability distribution of the service times and the inter-arrival times impact the output characteristics. Hence, the knowledge of the service time and the inter-arrival times belonging to a particular class of distributions is useful in developing a queueing model for the underlying system to determine its long term behavior. For example, in

Abramov (2006) stochastic inequalities for the number of losses for some single-server queueing models when the inter-arrival times or the services times are NBU or NWU have been derived.

The classification of distributions into various ageing classes is also of interest to researchers in economics. An application is in testing for the duration dependence (see Ohn et al. (2004)). Another possible application is in choosing the appropriate marginal distribution for modeling various time series data. For example, processes like GARCH and ARCH with heavy tailed marginal distributions have been used to model many financial time series.

Many tests exist in literature that test for exponentiality (or the assumption of constant failure rate) against different positive or negative ageing alternatives. A detailed discussion on the various classes of ageing along with their testing procedures and applications for i.i.d. random variables can be found in Deshpande and Purohit (2005) and Lai and Xie (2006). However, in many real applications, the random variables under consideration are dependent.

For example, in reliability analysis, the lifetimes of independent components in a reliability structure when the components share the same load or are subject to a shared environmental stress are dependent (see Barlow and Proschan (1975) and Li et al. (2011)

In all these cases, the random variables under consideration are associated - a concept defined by Esary et al. (1967) as follows.

A finite collection of random variables {Xj,1≤j≤n} is said to be associated, if for any choice of component-wise non-decreasing functions h, g : Rn→R, we have,

Marshall and Olkin (1983)) and Downton multivariate exponential distribution (Downton (1970)); the components of the moving average process {Xn=a0ϵn+a1ϵn−1,n∈N}, where ϵn, n∈N∪{0} are independent random variables and a0, a1 have the same sign. A detailed compilation of results and applications for associated random variables can be found in Bulinski and Shashkin (2007), Prakasa Rao (2012) and Oliveira (2012).

While the control of dependence in stochastic processes is generally given in terms of mixing conditions, an obvious drawback is that the mixing coefficients are defined using σ-fields. It makes these coefficients difficult to compute in practice. For associated random variables, the control of dependence is through the covariance structure of the random variables. The simplicity of the conditions under which the limit theorems can be proved gives an advantage over the popularly used mixing processes.

In this paper, we discuss the limiting behavior of some of the tests of exponentiality against univariate positive ageing based on U-statistics when the underlying random variables are stationary and associated. In particular, we look at tests by Deshpande (1983), Hollander and Proschan (1972) and Ahmad (1992) for testing exponentiality against IFRA, NBU and DMRL respectively. The kernels of the test statistics of the given tests belong to the class of kernels which are bounded (but are not of bounded variation). For tests based on U-statistics for i.i.d.

random variables, the test statistics can be shown to be asymptotically normally distributed using the results of

We first develop a central limit theorem for U-statistics based on the class of kernels discussed above for stationary associated random variables. We next use this result to obtain critical points, size and power for the given tests. This helps in analyzing the behavior of the considered tests under the dependent setup.

For the rest of the paper, assume {Xn,n∈N} is a stationary sequence of associated random variables with the distribution function of X1 denoted by F. We also assume that Xn,n∈N are uniformly bounded, i.e. there exists a 0<C1<∞, such that P(|X1|≤C1)=1. For applications in reliability and survival analysis this assumption is reasonable.

The paper is organized as follows. In the next section, Section 2, we give a general theorem for the asymptotic distribution of U-statistics based on bounded kernels for stationary associated random variables. In Section 3, we apply this result to discuss the limiting behavior of the tests by Deshpande (1983), Hollander and Proschan (1972) and Ahmad (1992) under association. In Section 4, the asymptotic normality of the test statistics and the power of the tests under the discussed dependent setup is illustrated via simulations. Section 5 is a brief discussion on the applications of our results and our intended future work. Section 6 contains some preliminary results and the proofs of our technical results.

2 Central limit theorem for U-statistics based on bounded kernels

The main result of this section, Theorem 2.3, gives the central limit theorem for U-statistics based on a bounded kernel of degree 2, when the underlying sample is a sequence of stationary associated random variables. The extension of this theorem to U-statistics with kernels of a general finite degree k > 2 are also discussed. These results are applied in section 3 to show the asymptotic normality of the test statistics of the considered tests of exponentiality against positive ageing under the dependent setup. Proof of the results are postponed to section 6.

Similarly, the Hoeffding’s decomposition for U-statistics of a finite degree k>2 can be obtained.

Before proceeding, we need to define the following.

The p.d.f fZ of the random vector Z is said to satisfy a Lipshitz condition of order 1, if for every x,u∈Rk and some finite constant C>0,

We next define the conditions (T1) and (T2) that will be needed to prove Theorem 2.3.

In the following, let {X′n,n∈N} be a sequence of i.i.d. random variables independent of the sequence {Xn,n∈N}, with the marginal distribution function of X′1 being F.

Let {X′n,n∈N} be a sequence of i.i.d. random variables independent of the sequence {Xn,n∈N}, with the marginal distribution function of X′1 being F.

Assume for all p=2,⋯,k the following are true.

The results can be extended to non-uniformly bounded random variables under stricter covariance restrictions, by using the standard truncation technique and putting appropriate assumptions on the moments of the underlying random variables.

Deshpande (1983), Hollander and Proschan (1972) and Ahmad (1992) had proposed tests for testing exponentiality against IFRA, NBU and DMRL respectively, for a sample of i.i.d. observations. In this section, we prove the asymptotic normalty of the test statistics of these tests when the underlying sample consists of stationary associated random variables.

Our aim is to test

We now obtain a limiting distribution for J(n,b) when the observations are associated.

Let {Xn,n≥1} be a sequence of stationary associated random variables, such that P(|Xn|≤C1)=1, for some 0<C1<∞, for all n≥1. Assume that conditions of Theorem 2.3 are satisfied. Then, the limiting distribution of J(n,b) under H0 is

The underlying kernel ρ is not continuous and not of local bounded variation. However, it is bounded. Also, ρ1 is a Lipschitz function (i.e ρ1(x) ≪ Cx, for all x∈[−C1,C1] and for some C>0). From Theorem 2.3,

Rejection criteria: Since σD is unknown, we use the following test statistic

is a consistent estimator for

Our aim is to test

When {Xj,1≤j≤n} are i.i.d., the asymptotic distribution of Nn can be obtained by the central limit theorem for U-statistics as discussed in Hoeffding (1948). In particular, under H0, we get

The kernel is of degree 3.

Rejection criteria: Since σHP is unknown, we use the following test statistic

where ^σHP is a consistent estimator for σHP. Reject H0 at a significance level α if ^HPn ≤ zα, zα=−z(1−α).

When {Xj,1≤j≤n} are i.i.d., the asymptotic distribution of δFn can be obtained by the central limit theorem for U-statistics as discussed in Hoeffding (1948). In particular, under H0, we get,

The kernel is of degree 2.

The statistic δFn can be made scale invariant by considering δFn/¯Xn (¯Xn=∑nj=1Xjn). The limiting distribution of δFn/¯Xn under H0 follows using (???) and the Slutsky’s theorem, i.e

Rejection criteria: Since σA is not known, we use the following test statistic

where ^σA is a consistent estimator for σA. Reject H0 at a significance level α if ^An ≥ z1−α.

The test statistics ^D(n,b), ^HPn, and ^An (under appropriate rejection criteria) can also be used for testing exponentiality against DFRA, NWU and IMRL respectively.

We assessed the performance of IFRA, NBU and DMRL tests based on ^D(n,b), ^HPn, and ^An when the underlying observations are stationary and associated via simulations. We generated associated random variables using the property that non-decreasing functions of independent random variables are associated. We used the statistical software R (R Core Team (2016)) for our simulations.