We consider the problem whether termination of affine integer loops is decidable. Since Tiwari conjectured decidability in 2004, only special cases have been solved. We complement this work by proving decidability for the case that the update matrix is triangular. 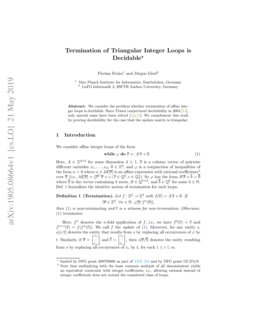 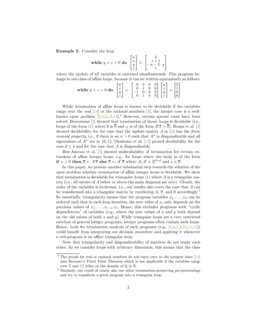 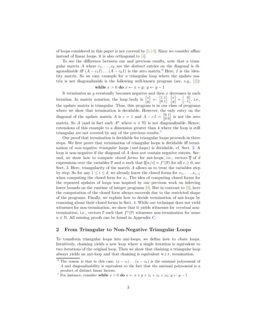 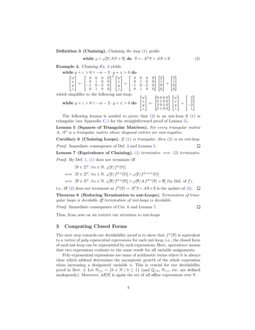 We consider affine integer loops of the form

is a column vector of pairwise different variables

x1,…,xd, ¯¯¯a∈Zd, and φ is a conjunction of inequalities of the form α>0 where α∈Af[¯¯¯x] is an affine expression with rational coefficients111Note that multiplying with the least common multiple of all denominators yields an equivalent constraint with integer coefficients, i.e., allowing rational instead of integer coefficients does not extend the considered class of loops. over ¯¯¯x (i.e., Af[¯¯¯x]={¯¯cT¯¯¯x+c∣¯¯c∈Qd,c∈Q}). So φ has the form B¯¯¯x+¯¯b>¯¯¯0 where ¯¯¯0 is the vector containing k zeros, B∈Qk×d, and ¯¯b∈Qk for some k∈N. Def. 1 formalizes the intuitive notion of termination for such loops.

where the update of all variables is executed simultaneously. This program belongs to our class of affine loops, because it can be written equivalently as follows.

While termination of affine loops is known to be decidable if the variables range over the real [15] or the rational numbers [5], the integer case is a well-known open problem [3, 4, 5, 14, 15].222The proofs for real or rational numbers do not carry over to the integers since [15] uses Brouwer’s Fixed Point Theorem which is not applicable if the variables range over Z and [5] relies on the density of Q in R. However, certain special cases have been solved: Braverman [5] showed that termination of linear loops is decidable (i.e., loops of the form (1) where ¯¯¯a is ¯¯¯0 and φ is of the form B¯¯¯x>¯¯¯0). Bozga et al. [4] showed decidability for the case that the update matrix A in (1) has the finite monoid property, i.e., if there is an n>0 such that An

is diagonalizable and all eigenvalues of

An are in {0,1}. Ouaknine et al. [14] proved decidability for the case d≤4 and for the case that A is diagonalizable.

In this paper, we present another substantial step towards the solution of the open problem whether termination of affine integer loops is decidable. We show that termination is decidable for triangular loops (1) where A is a triangular matrix (i.e., all entries of A below or above the main diagonal are zero). Clearly, the order of the variables is irrelevant, i.e., our results also cover the case that A can be transformed into a triangular matrix by reordering A, ¯¯¯x, and ¯¯¯a accordingly.333Similarly, one could of course also use other termination-preserving pre-processings and try to transform a given program into a triangular loop. So essentially, triangularity means that the program variables x1,…,xd can be ordered such that in each loop iteration, the new value of xi only depends on the previous values of x1,…,xi−1,xi. Hence, this excludes programs with “cyclic dependencies” of variables (e.g., where the new values of x and y both depend on the old values of both x and y). While triangular loops are a very restricted subclass of general integer programs, integer programs often contain such loops. Hence, tools for termination analysis of such programs (e.g., [6, 7, 8, 9, 11, 12, 13]) could benefit from integrating our decision procedure and applying it whenever a sub-program is an affine triangular loop.

Note that triangularity and diagonalizability of matrices do not imply each other. As we consider loops with arbitrary dimension, this means that the class of loops considered in this paper is not covered by [4, 14]. Since we consider affine instead of linear loops, it is also orthogonal to [5].

To see the difference between our and previous results, note that a triangular matrix A where c1,…,ck are the distinct entries on the diagonal is diagonalizable iff (A−c1I)…(A−ckI)

is the zero matrix.

is the identity matrix. So an easy example for a triangular loop where the update matrix is not diagonalizable is the following well-known program (see, e.g.,

It terminates as y eventually becomes negative and then x decreases in each iteration. In matrix notation, the loop body is [xy]←[[r]1101][xy]+[[r]0−1], i.e., the update matrix is triangular. Thus, this program is in our class of programs where we show that termination is decidable. However, the only entry on the diagonal of the update matrix A is c=1 and A−cI=[[r]0100] is not the zero matrix. So A (and in fact each An where n∈N) is not diagonalizable. Hence, extensions of this example to a dimension greater than 4 where the loop is still triangular are not covered by any of the previous results.555For instance, consider while x>0 do x←x+y+z1+z2+z3;y←y−1

Our proof that termination is decidable for triangular loops proceeds in three steps. We first prove that termination of triangular loops is decidable iff termination of non-negative triangular loops (nnt-loops) is decidable, cf. Sect. 2. A loop is non-negative if the diagonal of A does not contain negative entries. Second, we show how to compute closed forms for nnt-loops, i.e., vectors ¯¯¯q of d expressions over the variables ¯¯¯x and n such that ¯¯¯q[n/c]=fc(¯¯¯x) for all c≥0, see Sect. 3. Here, triangularity of the matrix A allows us to treat the variables step by step. So for any 1≤i≤d, we already know the closed forms for x1,…,xi−1 when computing the closed form for xi. The idea of computing closed forms for the repeated updates of loops was inspired by our previous work on inferring lower bounds on the runtime of integer programs [10]. But in contrast to [10], here the computation of the closed form always succeeds due to the restricted shape of the programs. Finally, we explain how to decide termination of nnt-loops by reasoning about their closed forms in Sect. 4. While our technique does not yield witnesses for non-termination, we show that it yields witnesses for eventual non-termination, i.e., vectors ¯¯c such that fn(¯¯c) witnesses non-termination for some n∈N. All missing proofs can be found in LABEL:app:proofs.

which simplifies to the following nnt-loop:

The following lemma is needed to prove that (2) is an nnt-loop if (1) is triangular (see LABEL:lem:quadratic_proof for the straightforward proof of Lemma 1).

Thus, from now on we restrict our attention to nnt-loops.

The next step towards our decidability proof is to show that fn(¯¯¯x) is equivalent to a vector of poly-exponential expressions for each nnt-loop, i.e., the closed form of each nnt-loop can be represented by such expressions. Here, equivalence means that two expressions evaluate to the same result for all variable assignments.

Poly-exponential expressions are sums of arithmetic terms where it is always clear which addend determines the asymptotic growth of the whole expression when increasing a designated variable n. This is crucial for our decidability proof in Sect. 4. Let N≥1={b∈N∣b≥1} (and Q>0, N>1, etc. are defined analogously). Moreover, Af[¯¯¯x] is again the set of all affine expressions over ¯¯¯x.

Let C be the set of all finite conjunctions over the literals n=c,n≠c where n is a designated variable and c∈N. Moreover for each formula ψ over n, let

be the characteristic function of

ψ, i.e., if ψ[n/c] is valid and , otherwise. The set of all poly-exponential expressions over ¯¯¯x is

As n ranges over N, we use as syntactic sugar for . So an example for a poly-exponential expression is

Moreover, note that if ψ contains a positive literal (i.e., a literal of the form “n=c” for some number c∈N), then is equivalent to either 0 or .

which is a polynomial whose degree is at most d−1. If c≠1, then we have

So Lemma 3 expresses a polynomial q via the difference of another polynomial r at the positions n and n−1, where the additional factor c can be chosen freely. A detailed proof of Lemma 3 can be found in LABEL:lem:pol_proof. It is by induction on the degree of q and its structure resembles the structure of the following algorithm to compute r. Using the Binomial Theorem, one can verify that q−s+c⋅s[n/n−1] has a smaller degree than q, which is crucial for the proof of Lemma 3 and termination of Procedure 1.

Lemma 4 (Closure of PE under Sums of Products and Exponentials).

As PE[¯¯¯x] is closed under addition, it suffices to show that we can compute an equivalent poly-exponential expression for any expression of the form

We first regard the case m=0. Here, the expression (4) can be simplified to

Clearly, there is a ψ′∈C such that is equivalent to . Moreover, α⋅bn−1=αb⋅bn where αb∈Af[¯¯¯x]. Hence, due to the Binomial Theorem

From now on, let m≥1. If ψ contains a positive literal n=c, then we get

Again, the step marked with (†) holds since we have for all i∈{1,…,n}. The last step holds as i≥c+2 implies . Similar to the case where ψ contains a positive literal, we can compute a poly-exponential expression which is equivalent to the first addend. We have

The proof of Lemma 4 gives rise to a corresponding algorithm.

We compute an equivalent poly-exponential expression for

The next step is to rearrange the first sum as in (9). In our example, it directly simplifies to 0 and hence we obtain

Finally, by applying the steps from (10) we get:

Recall that our goal is to compute closed forms for loops. As a first step, instead of the n-fold update function h(n,¯¯¯x)=fn(¯¯¯x) of (1) where f is the update of (1), we consider a recursive update function for a single variable x∈¯¯¯x:

Here, m∈N and p∈PE[¯¯¯x]. Using Lemma 4, it is easy to show that g can be represented by a poly-exponential expression.

It suffices to find a q∈PE[¯¯¯x] that satisfies

So both addends are equivalent to poly-exponential expressions. ∎

The restriction to triangular matrices now allows us to generalize Lemma 5 to vectors of variables. The reason is that due to triangularity, the update of each program variable xi only depends on the previous values of x1,…,xi. So when regarding xi, we can assume that we already know the closed forms for x1,…,xi−1. This allows us to find closed forms for one variable after the other by applying Lemma 5 repeatedly. In other words, it allows us to find a vector ¯¯¯q of poly-exponential expressions that satisfies