Tensor2Tensor is a library for deep learning models that is well-suited for neural machine translation and includes the reference implementation of the state-of-the-art Transformer model. 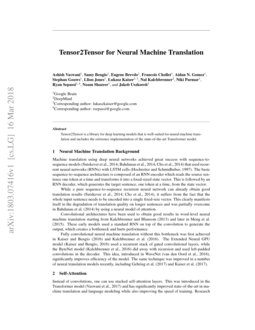 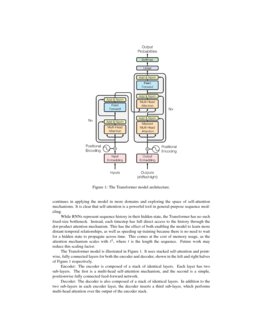 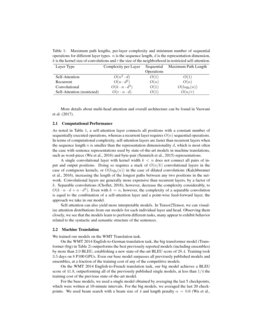 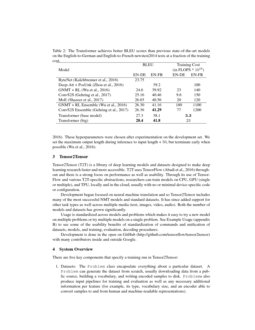 In this paper, we improve the attention or alignment accuracy of neural ...
Haitao Mi, et al. ∙

An In-depth Walkthrough on Evolution of Neural Machine Translation

This paper describes the submissions to the efficiency track for GPUs by...
Hieu Hoang, et al. ∙

In this paper we explore deep learning models with memory component or a...
Yang Yu, et al. ∙

A library for generalized sequence to sequence models

. The basic sequence-to-sequence architecture is composed of an RNN encoder which reads the source sentence one token at a time and transforms it into a fixed-sized state vector. This is followed by an RNN decoder, which generates the target sentence, one token at a time, from the state vector. While a pure sequence-to-sequence recurrent neural network can already obtain good translation results

(Sutskever et al., 2014; Cho et al., 2014), it suffers from the fact that the whole input sentence needs to be encoded into a single fixed-size vector. This clearly manifests itself in the degradation of translation quality on longer sentences and was partially overcome in Bahdanau et al. (2014) by using a neural model of attention. Convolutional architectures have been used to obtain good results in word-level neural machine translation starting from Kalchbrenner and Blunsom (2013) and later in Meng et al. (2015). These early models used a standard RNN on top of the convolution to generate the output, which creates a bottleneck and hurts performance. Fully convolutional neural machine translation without this bottleneck was first achieved in Kaiser and Bengio (2016) and Kalchbrenner et al. (2016). The Extended Neural GPU model (Kaiser and Bengio, 2016) used a recurrent stack of gated convolutional layers, while the ByteNet model (Kalchbrenner et al., 2016)

did away with recursion and used left-padded convolutions in the decoder. This idea, introduced in WaveNet

Instead of convolutions, one can use stacked self-attention layers. This was introduced in the Transformer model (Vaswani et al., 2017) and has significantly improved state-of-the-art in machine translation and language modeling while also improving the speed of training. Research continues in applying the model in more domains and exploring the space of self-attention mechanisms. It is clear that self-attention is a powerful tool in general-purpose sequence modeling. While RNNs represent sequence history in their hidden state, the Transformer has no such fixed-size bottleneck. Instead, each timestep has full direct access to the history through the dot-product attention mechanism. This has the effect of both enabling the model to learn more distant temporal relationships, as well as speeding up training because there is no need to wait for a hidden state to propagate across time. This comes at the cost of memory usage, as the attention mechanism scales with t2, where t is the length the sequence. Future work may reduce this scaling factor.

The Transformer model is illustrated in Figure 1. It uses stacked self-attention and point-wise, fully connected layers for both the encoder and decoder, shown in the left and right halves of Figure 1 respectively. Encoder: The encoder is composed of a stack of identical layers. Each layer has two sub-layers. The first is a multi-head self-attention mechanism, and the second is a simple, positionwise fully connected feed-forward network. Decoder: The decoder is also composed of a stack of identical layers. In addition to the two sub-layers in each encoder layer, the decoder inserts a third sub-layer, which performs multi-head attention over the output of the encoder stack. More details about multi-head attention and overall architecture can be found in Vaswani et al. (2017).

As noted in Table 1, a self-attention layer connects all positions with a constant number of sequentially executed operations, whereas a recurrent layer requires O(n) sequential operations. In terms of computational complexity, self-attention layers are faster than recurrent layers when the sequence length n is smaller than the representation dimensionality d, which is most often the case with sentence representations used by state-of-the-art models in machine translations, such as word-piece (Wu et al., 2016) and byte-pair (Sennrich et al., 2015) representations. A single convolutional layer with kernel width k<n does not connect all pairs of input and output positions. Doing so requires a stack of O(n/k) convolutional layers in the case of contiguous kernels, or O(logk(n)) in the case of dilated convolutions (Kalchbrenner et al., 2016), increasing the length of the longest paths between any two positions in the network. Convolutional layers are generally more expensive than recurrent layers, by a factor of k. Separable convolutions (Chollet, 2016), however, decrease the complexity considerably, to O(k⋅n⋅d+n⋅d2). Even with k=n, however, the complexity of a separable convolution is equal to the combination of a self-attention layer and a point-wise feed-forward layer, the approach we take in our model. Self-attention can also yield more interpretable models. In Tensor2Tensor, we can visualize attention distributions from our models for each individual layer and head. Observing them closely, we see that the models learn to perform different tasks, many appear to exhibit behavior related to the syntactic and semantic structure of the sentences.

We trained our models on the WMT Translation task. On the WMT 2014 English-to-German translation task, the big transformer model (Transformer (big) in Table 2) outperforms the best previously reported models (including ensembles) by more than 2.0 BLEU, establishing a new state-of-the-art BLEU score of 28.4. Training took 3.5 days on 8 P100 GPUs. Even our base model surpasses all previously published models and ensembles, at a fraction of the training cost of any of the competitive models. On the WMT 2014 English-to-French translation task, our big model achieves a BLEU score of 41.8, outperforming all of the previously published single models, at less than 1/4 the training cost of the previous state-of-the-art model. For the base models, we used a single model obtained by averaging the last 5 checkpoints, which were written at 10-minute intervals. For the big models, we averaged the last 20 checkpoints. We used beam search with a beam size of 4 and length penalty α=0.6 (Wu et al., 2016)

. These hyperparameters were chosen after experimentation on the development set. We set the maximum output length during inference to input length +

(Abadi et al., 2016) throughout and there is a strong focus on performance as well as usability. Through its use of TensorFlow and various T2T-specific abstractions, researchers can train models on CPU, GPU (single or multiple), and TPU, locally and in the cloud, usually with no or minimal device-specific code or configuration. Development began focused on neural machine translation and so Tensor2Tensor includes many of the most successful NMT models and standard datasets. It has since added support for other task types as well across multiple media (text, images, video, audio). Both the number of models and datasets has grown significantly. Usage is standardized across models and problems which makes it easy to try a new model on multiple problems or try multiple models on a single problem. See Example Usage (appendix B) to see some of the usability benefits of standardization of commands and unification of datasets, models, and training, evaluation, decoding procedures. Development is done in the open on GitHub (http://github.com/tensorflow/tensor2tensor) with many contributors inside and outside Google.

There are five key components that specify a training run in Tensor2Tensor:

These abstractions enable users to focus their attention only on the component they’re interested in experimenting with. Users that wish to try models on a new problem usually only have to define a new problem. Users that wish to create or modify models only have to create a model or edit hyperparameters. The other components remain untouched, out of the way, and available for use, all of which reduces mental load and allows users to more quickly iterate on their ideas at scale. Appendix A contains an outline of the code and appendix B contains example usage.

Tensor2Tensor provides a vehicle for research ideas to be quickly tried out and shared. Components that prove to be very useful can be committed to more widely-used libraries like TensorFlow, which contains many standard layers, optimizers, and other higher-level components. Tensor2Tensor supports library usage as well as script usage so that users can reuse specific components in their own model or system. For example, multiple researchers are continuing work on extensions and variations of the attention-based Transformer model and the availability of the attention building blocks enables that work. Some examples:

Continuing development on a machine learning codebase while maintaining the quality of models is a difficult task because of the expense and randomness of model training. Freezing a codebase to maintain a certain configuration, or moving to an append-only process has enormous usability and development costs. We attempt to mitigate the impact of ongoing development on historical reproducibility through 3 mechanisms:

If necessary, because the code is under version control on GitHub (http://github.com/tensorflow/tensor2tensor), we can always recover the exact code that produced certain experiment results.

Tensor2Tensor usage is standardized across problems and models. Below you’ll find a set of commands that generates a dataset, trains and evaluates a model, and produces decodes from that trained model. Experiments can typically be reproduced with the (problem, model, hyperparameter set) triple. The following train the attention-based Transformer model on WMT data translating from English to German: