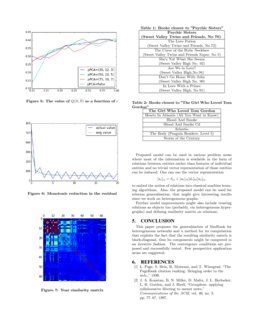 Most data in the modern world can be treated as an information network, thus network node similarity measuring has wide range of applications: search [1], recommendation systems [2], research publication networks analysis [3], biology [4], transportation and logistics [5] and others.

Consider a semantic network: set of types T, each type t∈T is a set of entities; set of relations R, each relation is 2-order predicate defined on two types from T:

both types in relation can be equal (rtt:t×t→{0,1}), few relations can share the same pair of types (∃r(1)tp≠r(2)tp∈{0,1}t×p). That structure may be considered as a graph with colored vertices and colored edges: vertex color is its entity type, edge color correponds to a relation.

The question that we address is how to define similarity functions

that would reflect the closeness of objects based on "similarity of relations" they enter, and at the same time not mixing different relations as soon as "objects of different types and links carry different semantic meanings, and it does not make sense to mix them to measure the similarity without distinguishing their semantics" [6].

The basic graph structure similarity measure is the classical SimRank [7] over a homogeneous graph G=(V,E) which is defined as follows:

The main drawback of this approach is that we cannot induce multiple relations or object types, so the only option is mixing them up into blobs "relation exists" and "all objects" that is completely not applicable in the case we have multiple relations with different semantics, for example the OpenCyc ontology node of the concept "Game" (see Figure  1) cannot be easily expressed via a single type of relations and objects.

that it same as PageRank, except random jumps are made into some pre-chosen node b, rather then into random node.

That approach can handle several relations and object types and is very useful when we know the structure of relations we want our similarity measure to be based on. In case we want just to "put our relations into a black box" that would find similarity that would capture all network relations as a whole, we might want to use something different. Recently, an approach [9] for building an optimal linear combination of meta-paths has been proposed.

There are several works on measuring similarity between objects from different classes, see, for example, [10].

Let us consider a function st(a,b) that assigns similarity score for two objects from the same class t as follows: objects a,b∈t∈T are similar (value st(a,b) is high) if they relate to objects which are similar too. That interdependence can be expressed via the following definition:

This can be rewritten as a Tensor SimRank equation:

where s is a block-diagonal matrix (one block per each entity type), w are the relation weights, rαβγ are the stochastic relation tensors 111We have to use tensors instead of matrices to have multiple relations on the same pair of classes (which have non-zero blocks where relations exist).

Similarity scores between elements of different classes are equal to zero by the definition. Relation between objects of unrelated classes is equal to zero by definition too. Equation (1) is basically the classical SimRank equation with the adjacency tensor instead of the adjacency matrix: each non-zero layer of tensor encodes some relation on the same pair of types. If one has more than a single relation between types p,t∈T, then r would have multiple non-zero layers on the intersection of indices associated with the classes t,p — one adjacency matrix per layer. In (1) the index γ stands for (weighted) summation over all layers of the tensor. That can be equivalently rewritten explicitly:

where the diagonal matrix D has to be chosen in a such way that diag(S)=I.

Simple iterations for (1) are computationally demanding due to large-scale matrix-by-matrix products, thus we propose a a method that exploits the fact that s is block diagonal and r is a three-dimensional block tensor with size of the last dimension (number of layers) much less then the overall amount of objects. On each iteration k for each r∈R we recompute si updates independently (assuming all other sj fixed), see Algorithm 1.

So we just update the similarity score for each class assuming all other classes similarities are fixed in a way that the objects from the target class (t) that are related to objects from some other class (c,d)∈p that are close (sp(c,d) is high) become closer too (st(a,b)↑).

is the order; column-stochastic matrix of pairwise types impacts (weights)

w∈RN×N; operator W:r(j)tp→R∥t∥×∥p∥ that maps relation into corresponding column-stochastic adjacency matrix. If rtp is not defined for some (t,p)∈T2, then wtp=0.

[12] to perform fast approximate projections on low-rank matrix manifold at each step of the iterative process (Algorithm 3).

The only difference with Algorithm 2 is that on each step we perform probabilistic SVD decomposition of the matrix S−I, so that S≈I+UDUT, and project it onto the manifold of matrices of rank at.

Recall that the classical SimRank can be computed as a solution of the equation:

Fixed-point iteration converges if W is a column-stochastic matrix. In the vector form (vec(⋅) operator maps an n×n matrix into a n2 vector by taking column by column) that can be written as222vec(ABC)=(CT⊗A)vec(B):

Tensor SimRank (2) computation can be equivalently written in the form:

or in the vectorized for

Moreover, SimRank is also commonly approximated by the solution of the discrete Lyapunov equation:

which can be generalized to the tensor case as

and a fixed-point iteration converges [13] if:

We conjecture that fixed-point iterations for (3) converge if:

In the simplest form (we have no preferences among relations and classes) it reduces to (relations weight):

To test convergence conditions we conducted series of tests on randomly generated sparse networks with different number of classes: K∈{3,5,7,10} and with randomly chosen number of objects in each Nreal∈U[N/2;N], N∈{10…100}, full network of relation types (all possible types relations exists) with 2min(Nireal,Njreal) randomly chosen edges in each and default w matrix (no priority). All generated networks successfully converged that illustrates that convergent sufficient conditions listed in previous section were adequate, see Figures 2,3.

To determine if model is capable of similarity reconstruction we generated a tree graph from randomly distributed points on a plane and tested if model can reconstruct points spatial similarity basing only on their relations.

that actually shows how many "a is closer to c then to b" relations were preserved.

From Figure 5 one can see that at level r≈0.3 model gets saturated, but at the level r≈0.15 models that use low-rank version of Tensor SimRank perform way better than the "pure" algorithm. The numbers in the brackets denote the dimensionality of the matrix space into which the similarity matrices were projected on each step (rank of approximation).

The model was run on subsample from the Book-Crossing Dataset [14]. We have extracted only those authors who had highest (top100) number of books in the collection. The final network had the following structure:

Model convergence is shown on Figure 6, where successfull convergence to the best possible low-rank approximation can be seen. The similarity structure is clearly visible on Year similarity matrix heatmap (Figure (6)). We expect diagonal dominance as soon as temporarily close years should be more or less similar in terms of authors and publishers characteristic of that period. Tables 1 and 2 are examples of "closest book" requests, we want to notice that no NLP-preprocessing was conducted, nevertheless model treated books from same storybook as similar basing on author/publisher/year similarities.

to embed the notion of relations into classical machine learning algorithms. Also, the proposed model can be used for relation generalisation, that might give interesting results since we work on heterogeneous graphs.

Further model improvements might also include treating relations as objects too (probably, via heterogeneous hypergraphs) and defining similarity matrix on relations.

This paper proposes the generalization of SimRank for heterogeneous networks and a method for its computation that exploits the fact that the resulting similarity matrix is block-diagonal, thus its components might be computed in an iterative fashion. The convergence conditions are proposed and successfully tested. Few perspective application areas are suggested.