In the present paper, we are interested in developing iterative Krylov subspace methods in tensor structure to solve a class of multilinear systems via Einstein product. In particular, we develop global variants of the GMRES and Gloub–Kahan bidiagonalization processes in tensor framework. We further consider the case that mentioned equation may be possibly corresponds to a discrete ill-posed problem. Applications arising from color image and video restoration are included. 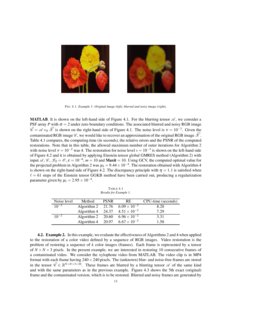 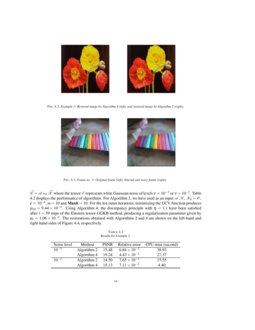 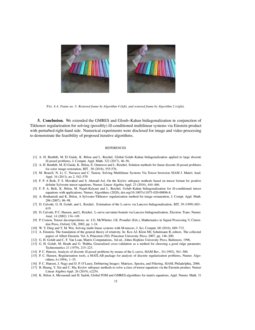 In this paper, we are interested in approximating the solution of following tensor equation

[31, 32] and as a result have been extensively studied in the literature [9, 29, 22]. The most recent tensor approaches used for numerically solving PDEs have been investigated in [10]. For those applications, we have to take advantage of this multidimensional structure to build rapid and robust methods for solving the related problems. For an extensive literature on tensors one can see for example the good papers in [20, 21]. Over the years many specialized methods for solving tensor problems of type (1) have been developed, see e.g. [17] for tensor forms of the Arnoldi and Lanczos processes for well-posed problems. Huang et al. [17] pointed out that tensor equations of the form (1) appear in continuum physics, engineering, isotropic and anisotropic elastic models. Multilinear systems of the form (1) may also arise from discretization of the high-dimensional Poisson problem using finite difference approximations [3, 17].

The remainder of paper is organized as follows: We shall first in Section 2 by presenting some symbols and notations used throughout paper. Section 3 includes reviewing the adaptation of Tikhonov regularization for tensor equation (1). Then we propose GMRES and Global Golub–Kahan methods via Einstein in conjunction with Tikhonov regularization. On the basis of Point Spread Function (PSF), in Section 4, we propose a tensor formulation in the form of (1) that describes the blurring of color image and video processing. Numerical examples are reported on restoring blurred and noisy color images and videos. Concluding remarks can be found in Section 5.

In this section, we briefly review some concepts and notions that are used throughout the paper. A tensor

is a multidimensional array of data and a natural extension of scalars, vectors and matrices to a higher order, a scalar is a

denotes a tensor in RI1×I2×I3…×IN−1 which is obtained by fixing the last index and is called frontal slice; see [20, 21] for more details. Throughout this work, vectors and matrices are respectively denoted by lowercase and capital letters, and tensors of higher order are represented by calligraphic letters.

We first recall the definition of n-mode tensor product with a matrix; see [21] .

Next, we recall the definition and some properties of the tensor Einstein product which is an extension of the matrix product; for more details see [3]

The inner product of two same size tensors X,Y∈RI1×I2×⋯×IN is defined by

Basically, the product X⊠NY is the contracted product of N-mode tensors X and Y along the first N−1 modes. It is immediate to see that for X,Y∈RI1×I2×⋯×IN, we have

In this section, we recall the tensor global Arnoldi and propose iterative methods based on Global Arnoldi and Global Golub–Kahan bidiagonlization (GGKB) combined with Tikhonov regularization that are applicable to the restoration of a color images and videos from an available blur- and noise-contaminated versions.

Many applications require the solution of several ill-conditioning systems of equations of the form (1) with a right hand side contaminated by an additive error,

is the matrix of error terms that may stem from measurement and discretization errors. An ill-posed tensor equation may appear in color image restoration, video restoration, and when solving some partial differential equations in several space dimensions. In order to diminish the effect of the noise in the data, we replace the original problem by a stabilized one. One of the most popular regularization methods is due to Tikhonov

[30]. Tikhonov regularization problem to solve (4) is given by

The choice of μ affects how sensitive Xμ is to the error E in the contaminated right-hand side. Many techniques for choosing a suitable value of μ have been analyzed and illustrated in the literature; see, e.g., [33] and references therein. In this paper we use the discrepancy principle and the Generalized Cross Validation (GCV) techniques.

Let ˜Hm be the upper (m+1×m) Hessenberg matrix whose entries are the hij from Algorithm 1 and let Hm be the matrix obtained from ˜Hm by deleting the last row. Then, it is not difficult to verify that the Vi’s obtained from Algorithm 1 form an orthonormal basis of the tensor Krylov subspace Km(A,V). Analogous to [4, 18], we can prove the following proposition.

-th column of the identity matrix

Using Algorithm 1, we can propose the global GMRES method to solve the problem (8). As for the global GMRES, we seek for an approximate solution Xm, starting from X0 such that Xm∈X0+Km(A,V) and by solving the minimization problem

Let m steps of Algorithm 1 has been performed. Given an initial guess X0, we set

which results Rm=R0−Wm¯×(M+N+1)ym. Using the relations (3.2), from Proposition 2 it immediate to observe that

Therefore, ym is determined as follows:

The relations (10) and (11) define the tensor global GMRES (TG-GMRES). Setting X0=0 and using the relations (9), (10) and (11) it follows that instead of solving the problem (5) we can consider the following low dimensional Tikhonov regularization problem

The solution of the problem (12) is given by

The minimizer ym,μ of the problem (13) is computed as the solution of the linear system of equations

Notice that the Tikhonov problem (12) is a matrix one with small dimension as m is generally small. Hence it can be solved by some techniques such as the GCV method [13] or the L-curve criterion [14, 15, 7, 8].

where σi is the i

th singular value of the matrix

In the practical implementation, it’s more convenient to use a restarted version of the global GMRES. As the number of outer iterations increases, it is possible to compute the m-th residual without forming the solution. This is described in the following theorem. At step m, the residual Rm=C−A∗NXm produced by the tensor global GMRES method for solving (1) has the following expression

˜Hm and γm+1 is the last component of the vector βQTmem+1 in which β=∥R0∥F and eℓ∈Rℓ is the last column of identity matrix. Furthermore,

by considering the QR decomposition ˜Hm=Qm˜Um of the (m+1)×m matrix ˜Hm, we get

where zm denotes vector obtained by deleting the last component of QTmβem+11. Since ym solves problem (11), it follows that ym is the solution of ˜Umym=zm, i.e.,

Note that Rm can be written in the following form

Now the result follows immediately from the above computations.

The tensor form of global GMRES algorithm for solving (1) is summarized as follows:

Instead of finding orthonormal basis for the Krylov subspace and using GMRES method, one can apply oblique projection schemes based on biorthogonal bases for Km(A,V) and Km(AT,W); see [19] for instance.

Here, we exploit the tensor Golub–Kahan algorithm via the Einstein product. It should be commented here that the Golub–Kahan algorithm has been already examined for solving ill-posed Sylvester and Lyapunov tensor equations with applications to color image restoration [5]. Let tensors A∈RI1×…×IN×I1×…×IN, V∈RI1×…×IN×J1×…×JM and U∈RJ1×…×JM×I1×…×IM be given. Then, the global Golub–Kahan bidiagonalization (GGKB) algorithm is summarized in Algorithm 3.

Assume that ℓ steps of the GGKB process have been performed, we form the lower bidiagonal matrix Cℓ∈Rℓ×ℓ

Assume that ℓ have performed and all non-trivial entries of the matrix ˜Cℓ are positive. Let Vτ and Uτ be (M+N+1)-mode tensors whose frontal slices are given by Vj and Uj for j=1,2,…,τ, respectively. Furthermore, suppose that Wτ and W∗τ are (M+N+1)-mode tensors having frontal slices A∗NVj and AT∗NUj for j=1,2,…,τ, respectively. The following relations hold:

which conclude (18) from definition of n-mode product. Similarly, Eq. (19) follows from Lines 4 and 6 of Algorithm 3.

Here, we apply the following Tikhonov regularization approach and solve the new problem

We comment on the use of μ−1 in (20) instead of μ below. As for the iterative tensor Global GMRES method discussed in the previous subsection, the computation of an accurate approximation Xμ requires that a suitable value of the regularization parameter be used. In this subsection, we use the discrepancy principle to determine a suitable regularization parameter assuming that an approximation of the norm of additive error is available, i.e., we have a bound ε for ∥E∥F. This priori information suggests that μ has to be determined such that,

where η>1 is the safety factor for the discrepancy principle. A zero-finding method can be used to solve (21) in order to find a suitable regularization parameter which also implies that ∥C−A∗NXμ∥F has to be evaluated for several μ-values. When the tensor A is of moderate size, the quantity ∥C−A∗NXμ∥F can be easily evaluated. This computation becomes expensive when A is a large tensor, which means that its evaluation by a zero-finding method can be very difficult and computationally expensive. In what follows, it is shown that this difficulty can be remedied by using a connection between the Golub–Kahan bidiagonalization (GGKB) and Gauss-type quadrature rules. This connection provides approximations of moderate sizes to the quantity ∥C−A∗NXμ∥F and therefore gives a solution method to inexpensively solve (21) by evaluating these small quantities; see [1, 2] for discussion on this method. Let us consider the following functions of μ,

Glf and Rℓ+1fμ are pairs of Gauss and Gauss-Radau quadrature rules, respectively, and they approximate ϕ(μ) as follows

by using Newton’s method. The use the parameter μ in (20) instead of 1/μ, implies that the left-hand side of (21) is a decreasing convex function of μ. Therefore, there is a unique solution, denoted by με, of

for almost all values of ε>0 of practical interest and therefore also of (26) for ℓ sufficiently large; see [1, 2] for analyses. We accept μℓ that solve (21) as an approximation of μ, whenever we have

If (27) does not hold for μl, we carry out one more GGKB steps, replacing ℓ by ℓ+1 and solve the nonlinear equation

see [1, 2] for more details. Assume now that (27) holds for some μℓ. The corresponding regularized solution is then computed by

It is also computed by solving the least-squares problem

The following result shows an important property of the approximate solution (29). We include a proof for completeness.