We investigate the computational complexity of separating two distinct vertices s and z by vertex deletion in a temporal graph. In a temporal graph, the vertex set is fixed but the edges have (discrete) time labels. Since the corresponding Temporal (s, z)-Separation problem is NP-hard, it is natural to investigate whether relevant special cases exist that are computationally tractable. To this end, we study restrictions of the underlying (static) graph---there we observe polynomial-time solvability in the case of bounded treewidth---as well as restrictions concerning the "temporal evolution" along the time steps. Systematically studying partially novel concepts in this direction, we identify sharp borders between tractable and intractable cases. 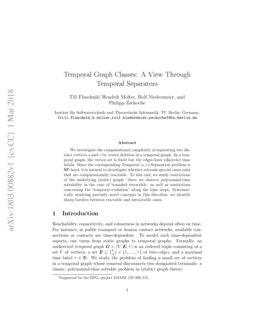 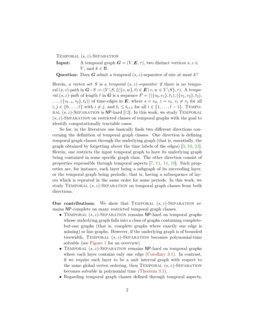 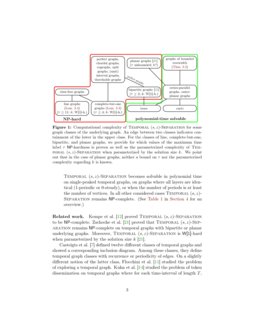 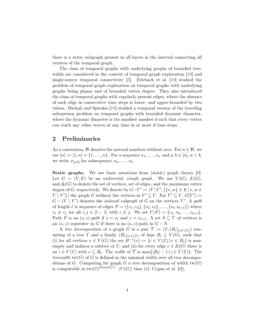 The Complexity of Finding Temporal Separators under Waiting Time Constraints

In this work, we investigate the computational complexity of Restless Te...
Hendrik Molter, et al. ∙

Reachability questions are one of the most fundamental algorithmic primi...
Philipp Zschoche, et al. ∙

The Computational Complexity of Finding Separators in Temporal Graphs

On Finding Separators in Temporal Split and Permutation Graphs

Removing all connections between two vertices s and z in a graph by remo...
Nicolas Maack, et al. ∙

We study how we can accelerate the spreading of information in temporal ...
Argyrios Deligkas, et al. ∙

Reachability, connectivity, and robustness in networks depend often on time. For instance, in public transport or human contact networks, available connections or contacts are time-dependent. To model such time-dependent aspects, one turns from static graphs to temporal graphs. Formally, an undirected temporal graph G=(V,E,τ) is an ordered triple consisting of a set V of vertices, a set E⊆(V2)×{1,…,τ} of time-edges, and a maximal time label τ∈N. We study the problem of finding a small set of vertices in a temporal graph whose removal disconnects two designated terminals: a classic, polynomial-time solvable problem in (static) graph theory.

So far, in the literature one basically finds two different directions concerning the definition of temporal graph classes. One direction is defining temporal graph classes through the underlying graph (that is, essentially, the graph obtained by forgetting about the time labels of the edges) [erlebach2015temporal, AxiotisF16, zschoche2017computational]. Herein, one restricts the input temporal graph to have its underlying graph being contained in some specific graph class. The other direction consist of properties expressible through temporal aspects [casteigts2012time, FlocchiniMS13, KuhnLO10, michail2016traveling]. Such properties are, for instance, each layer being a subgraph of its succeeding layer, or the temporal graph being periodic, that is, having a subsequence of layers which is repeated in the same order for some periods. In this work, we study Temporal (s,z)-Separation on temporal graph classes from both directions.

We show that Temporal (s,z)-Separation remains NP-complete on many restricted temporal graph classes.