While single image shadow detection has been improving rapidly in recent years, video shadow detection remains a challenging task due to data scarcity and the difficulty in modelling temporal consistency. The current video shadow detection method achieves this goal via co-attention, which mostly exploits information that is temporally coherent but is not robust in detecting moving shadows and small shadow regions. In this paper, we propose a simple but powerful method to better aggregate information temporally. We use an optical flow based warping module to align and then combine features between frames. We apply this warping module across multiple deep-network layers to retrieve information from neighboring frames including both local details and high-level semantic information. We train and test our framework on the ViSha dataset. Experimental results show that our model outperforms the state-of-the-art video shadow detection method by 28 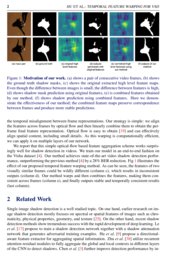 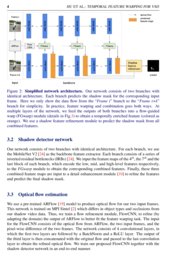 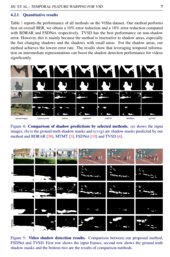 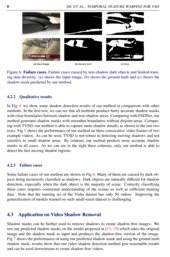 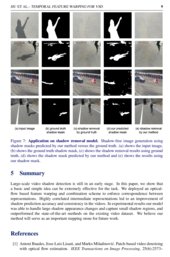 . Therefore, shadow detection has drawn a lot of interest in recent years especially with the rapid development of deep-learning-based methods

A shadow video typically consists of hundreds of frames that contain shadows varying in shapes and intensities. The detection problem is compounded by video-specific issues such as motion blur. Thus, simply applying image shadow detection methods frame-by-frame on video often yields inconsistent predictions (see Fig 1.d). Instead, a common strategy to deal with video data is to leverage temporal information across video frames [Zhu et al.(2017)Zhu, Xiong, Dai, Yuan, and Wei, Yan et al.(2019)Yan, Li, Xie, Li, Wang, Chen, and Lin]. Here the difficulty lies in how to incorporate information across video where there is spatial misalignment between frames due to the movements of objects and cameras.

In this paper, we propose a straightforward but powerful deep-learning based method to obtain a rich feature representation for video shadow detection. We focus on dealing with the temporal misalignment between frame representations. Our strategy is simple: we align the features across frames by optical flow and then linearly combine them to obtain the per-frame final feature representation. Optical flow is easy to obtain [Liu et al.(2020)Liu, Zhang, He, Liu, Wang, Tai, Luo, Wang, Li, and Huang] and can effectively align spatial content, including small details. As this warping is computationally efficient, we can apply it on multiple layers of our network.

We report that this simple optical-flow based feature aggregation scheme works surprisingly well for shadow detection in videos. We train our model in an end-to-end fashion on the Visha dataset [Chen et al.(2021)Chen, Wan, Zhu, Shen, Fu, Liu, and Qin]. Our method achieves state-of-the-art video shadow detection performance, outperforming the previous method [Chen et al.(2021)Chen, Wan, Zhu, Shen, Fu, Liu, and Qin] by a 28% BER reduction. Fig 1 illustrates the effect of our proposed temporal feature warping method. As can be seen, the features of two visually similar frames could be wildly different (column c), which results in inconsistent outputs (column d). Our method warps and then combines the features, making them consistent across frames (column e), and finally outputs stable and temporally consistent results (last column).

Video shadow detection is a classic problem on its own. Earlier work [Jacques et al.(2005)Jacques, Jung, and Musse, Shi and Liu(2019)] focuses on the spectral and spatial features, which depend heavily on the quality of data. Without temporal constraints, these methods often output inconsistent predictions across frames. The first large-scale video shadow detection dataset was proposed by Chen et al[Chen et al.(2021)Chen, Wan, Zhu, Shen, Fu, Liu, and Qin]. The dataset contains 120 fully-annotated videos with a total of 11,685 frames. They also proposed the first deep-learning-based method for video shadow detection in which a dual gated co-attention module is used to focus on common high-level features between frames. This co-attention module allows their network to filter out temporally inconsistent information from each frame representation to obtain more stable and consistent results. However, this mechanism causes the method to be less sensitive to shadow areas that substantially change across frames due to temporal misalignment. By contrast, our method performs temporal alignment before combining features. Besides, our temporal alignment module can be used for all layers of the network, allowing us to pick up even small shadow areas. Co-attention can only be applied on high-level feature maps due to its computational cost.

The overall structure of our framework is illustrated in Fig 2. Our model consists of two branches with identical architectures. The input of our model is a RGB video frame pair. The two images are input to the two branches of the model to extract two sets of feature maps across the three different layers of the network. Throughout the network, these features are progressively enriched by the information from the features of the other image via temporal warping and linear combination.

In particular, we first obtain two dense optical flow fields from the two images using ARFlow [Liu et al.(2020)Liu, Zhang, He, Liu, Wang, Tai, Luo, Wang, Li, and Huang]. Following [Gadde et al.(2017)Gadde, Jampani, and Gehler, Li et al.(2021)Li, Zhao, He, Zhu, and Liu], we train a small module to refine these optical flow fields to better suit the feature warping task, depicted as FlowCNN in Fig 2. At multiple layers of the network, we combine the features of each branch with the aligned features from the other. A flow-guided warp (FGwarp) module is used to first warp the frame feature representation to spatially align it with the content of the other frame and then linearly combine the original features with the warped features from the other frame. This simple feature aggregation scheme ensures consistency between the two frame representations. The combined features of different levels are input through a shadow refinement module to generate the final shadow mask prediction.

Our network consists of two branches with identical architecture. For each branch, we use the MobileNet V2 [Sandler et al.(2018)Sandler, Howard, Zhu, Zhmoginov, and Chen] as the backbone feature extractor. Each branch consists of a series of inverted residual bottlenecks (IRBs) [Sandler et al.(2018)Sandler, Howard, Zhu, Zhmoginov, and Chen]. We input the feature maps of the 4th, the 7th and the last block of each branch, which encode the low, mid, and high-level features respectively, to the FGwarp module to obtain the corresponding combined features. Finally, these three combined feature maps are input to a detail enhancement module [Hu et al.(2021)Hu, Wang, Fu, Jiang, Wang, and Heng] to refine the features and predict the final shadow mask.

which differs in object types and occlusions from our shadow video data. Thus, we train a flow refinement module, FlowCNN, to refine (by adapting the domain) the output of ARFlow to better fit the feature warping task. The input for the FlowCNN consists of the optical flow from ARFlow, the two input frames, and the pixel-wise difference of the two frames. The network consists of 4 convolutional layers, in which the first two layers are followed by a BatchNorm and a ReLU layer. The output of the third layer is then concatenated with the original flow and passed to the last convolution layer to obtain the refined optical flow. We train our proposed FlowCNN together with the shadow detector network in an end-to-end manner.

We enforce consistency between frame feature representations by mutually exchanging their intermediate features. Since motion in video causes the spatial misalignment between the content of consecutive frames, we first need to apply an optical flow based feature warping to align the features. A flow-guided warp (FGwarp) module is defined for the task. Fig 3 illustrates this scheme for transferring features from frame t to frame t+k.

Given a pair of feature maps, f1 and f2, and the refined optical flow U1→2. The feature f2 can be warped to spatially align with the contents of f1. We perform this feature warping for each channel of the feature map separately. The value at a pixel p, channel c of the warped feature ^fc1 can be computed as follows:

where q enumerates all spatial locations in the feature map and B(⋅,⋅)

Given the refined optical flow Ut→t+k and the feature map ft, we can propagate the features from the tth frame to get the aligned ^ft+k:

The warp(⋅,⋅) function is implemented by applying Eq.1 on different feature map levels. Then, the combined feature map ~ft+k can be computed as follows:

where w1 and w2 represent the per-channel coefficients of the linear combination that combines the two features, ⊙ represents channel-wise scalar multiplication. The resulting ~ft+k is then passed to the following layers in the feature extractor backbone.

We implement our framework using PyTorch. The feature extractor backbone is initialized via pre-trained MobileNet V2 on ImageNet

while other components are trained from scratch. We use stochastic gradient descent (SGD) with momentum of

0.9 and weight decay of 0.0005 to optimize the whole network. The training is in an end-to-end fashion where the objective function is to minimize the mean squared error (MSE) between the ground-truth and predicted shadow masks. The initial learning rate is set to 0.005, updated by poly strategy [Liu et al.(2015)Liu, Rabinovich, and Berg] with the power of 0.9. We train the model for 20k iterations. All input frames are resized to 512×512

For inference, we resize the inputs to 512×512. We predict shadow masks for each pair of adjacent frames. Thus, each frame, except the first and last one, will be used in two different inference passes. The final shadow mask of each frame is the average of the frame’s two output shadow masks.

4.2 Comparison with the state-of-the-art

Table 1 reports the performance of all methods on the ViSha dataset. Our method performs best on overall BER, we obtain a 10% error reduction and a 18% error reduction compared with BDRAR and FSDNet, respectively. TVSD has the best performance on non-shadow error. However, this is mainly because the method is insensitive to shadow areas, especially the fast changing shadows and the shadows with small areas. For the shadow areas, our method achieves the lowest error rate. The results show that leveraging temporal information on intermediate representations can boost the shadow detection performance for videos significantly.

In Fig 4, we show some shadow detection results of our method in comparison with other methods. In the first row, we can see that all methods produce fairly accurate shadow masks with clear boundaries between shadow and non-shadow areas. Comparing with FSDNet, our method generates shadow masks with smoother boundaries without disjoint areas. Comparing with TVSD, our method is able to capture more shadow details, as shown in the last two rows. Fig 5 shows the performance of our method on three consecutive video frames of two example videos. As can be seen, TVSD is not robust in detecting moving shadows and not sensitive to small shadow areas. By contrast, our method predicts more accurate shadow masks in all cases. As we can see in the right three columns, only our method is able to detect the fast moving shadow regions.

Some failure cases of our method are shown in Fig 6

. Many of them are caused by dark objects being incorrectly classified as shadows. Dark objects are naturally difficult for shadow detection, especially when the dark object is the majority of scene. Correctly classifying these cases requires contextual understanding of the scenes as well as sufficient training data. Note that the training set of the Visha dataset has only 50 videos. Improving the generalization of models trained on such small-sized dataset is challenging.

Large-scale video shadow detection is still in an early stage. In this paper, we show that a basic and simple idea can be extremely effective for the task. We deployed an optical-flow based feature warping and combination scheme to enforce correspondence between representations. Highly correlated intermediate representations led to an improvement of shadow prediction accuracy and consistency in the videos. In experimental results our model was able to handle large shadow appearance changes and capture small shadow regions, and outperformed the state-of-the-art methods on the existing video dataset. We believe our method will serve as an important stepping stone for future work.