Temporal action detection aims at not only recognizing action category but also detecting start time and end time for each action instance in an untrimmed video. The key challenge of this task is to accurately classify the action and determine the temporal boundaries of each action instance. In temporal action detection benchmark: THUMOS 2014, large variations exist in the same action category while many similarities exist in different action categories, which always limit the performance of temporal action detection. To address this problem, we propose to use joint Identification-Verification network to reduce the intra-action variations and enlarge inter-action differences. The joint Identification-Verification network is a siamese network based on 3D ConvNets, which can simultaneously predict the action categories and the similarity scores for the input pairs of video proposal segments. Extensive experimental results on the challenging THUMOS 2014 dataset demonstrate the effectiveness of our proposed method compared to the existing state-of-art methods for temporal action detection in untrimmed videos. 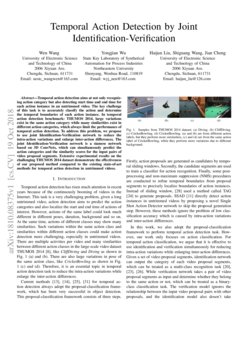 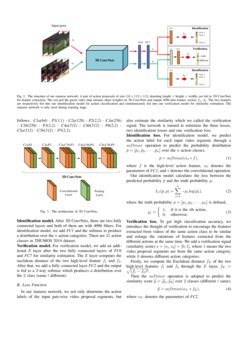 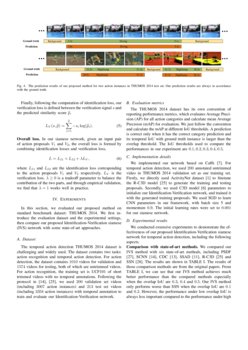 Temporal action detection has risen much attention in recent years because of the continuously booming of videos in the Internet. This task is a very challenging problem, given a long untrimmed video, action detection aims to predict the action categories and also localize the start and end time of actions of interest. However, actions of the same label could look much different in different poses, duration, background and so on. At the same time, actions of different classes may show many similarities. Such variations within the same action class and similarities within different action classes could make action detection more challenging, especially in untrimmed videos. There are multiple activities per video and many similarities between different action classes in the large-scale video dataset THUMOS 2014 [8], like CliffDiving and Diving as shown in Fig. 1 (a) and (b). There are also large variations in pose of the same action class, like CricketBowling as shown in Fig. 1 (c) and (d). Therefore, it is an essential topic in temporal action detection task to reduce the intra-action variations while enlarge the inter-action differences.

Current methods [14, 31, 25, 13] for temporal action detection always adopt the proposal-classification framework, which has been very successful in object detection. This proposal-classification framework consists of three steps. Firstly, action proposals are generated as candidates by temporal sliding windows. Secondly, the candidate segments are used to train a classifier for action recognition. Finally, some post-processing and non-maximum suppression (NMS) procedures are conducted to refine temporal boundaries from proposal segments to precisely localize boundaries of action instances. Instead of sliding window, [28] used a method called TAG [24] to generate proposals. SSAD [11] directly detect action instances in untrimmed videos by proposing a novel Single Shot Action Detector network to skip the proposal generation step. However, these methods ignore the problem of low classification accuracy which is caused by intra-action variations and inter-action differences.

In this work, we also adopt the proposal-classification framework to perform temporal action detection task. However, our work only focuses on action classification. For temporal action classification, we argue that it is effective to use identification and verification simultaneously for reducing intra-action variations while enlarging inter-action differences. Given a set of video proposal segments, identification network can output the category of each video proposal segments, which can be treated as a multi-class recognition task [26, 23, 20]

Our contributions are two-fold:

The paper is organized as follows. We first review some related works in Section II. In Section III, we describe our framework of Identification-Verification. Section IV provides the experimental results on the large-scale action detection dataset. At last, we conclude our works in Section V.

In this section, we will briefly review some related works, including action recognition, object detection, temporal action detection and person Re-identification.

Action recognition has been made great progress in the past few years with the wide adoption of convolutional neural networks (CNNs). Action recognition aims to determine the category of an action instance, so the models of action recognition can be used in temporal action detection to extract features. The previous works

[15, 22, 21] try to capture both appearance and motion information, both of which are essential to action recognition. However, most of these methods are based on the short trimmed videos, in which the only action is performed during the whole video time. Hense, there is no need to consider the temporal boundaries of each action instance. Typical datasets used in action recognition such as UCF101 [16], HMDB51 [10] and Sports-1M [9] include amount of trimmed videos.

Earlier methods of object detection are mostly based on hand-crafted low-level features. In recent years, inspired by the success of deep learning, object detection has achieved state-of-art performance. Most approaches are based on the pipeline of proposal-classification. R-CNN

. It is usually regarded as an image retrieval problem and aimed at determining whether the person has been appeared in another camera. Many works

(temporal kernel size, temporal stride) for the 3D Pooling Layer. The layout of these two types of layer in our architecture are shown in Fig.

Identification model. After 3D ConvNets, there are two fully connected layers and both of them are with 4096 filters. For identification model, we add FC1 and the softmax to produce a distribution over the n action categories. There are 21 action classes in THUMOS 2014 dataset.

Verification model. For verification model, we add an additional E layer after the two fully connected layers of FC6 and FC7 for similarity estimation. The E layer computes the euclidean distance of the two high-level feature f1 and f2. After that, we add a fully connected layer FC2 and the output is fed to a 2-way softmax which produces a distribution over the 2 class (same / different).

In our siamese network, we not only determine the action labels of the input pair-wise video proposal segments, but also estimate the similarity which we called the verification signal. The network is trained to minimize the three losses, two identification losses and one verification loss.

Identification loss. For identification model, we predict the action label for each input video segment, through a softmax

operation to predict the probability distribution

where f is the high-level action feature, αI denotes the parameters of FC1, and ∗ denotes the convolutional operation.

Our identification model calculates the loss between the predicted probability ^p and the truth probability p,

where the truth probability p=[p1,p2,⋯,pn] is defined,

Verification loss. To get high classification accuracy, we introduce the thought of verification to encourage the features extracted from videos of the same action class to be similar and enlarge the variations of features extracted from the different actions at the same time. We add a verification signal (similarity score) s=[s1,s2]=[0,1], where 1 means the two video proposal segments are from the same action category, while 0 denotes different action categories.

Firstly, we compute the Euclidean distance fE of the two high-level features f1 and f2 through the E layer, fE=√(f1−f2)2.

Then the softmax operation is adopted to predict the similarity score ˜p=[˜p1,˜p2] over 2 classes (different / same),

where αV denotes the parameters of FC2.

Overall loss. In our siamese network, given an input pair of action proposals V1 and V2, the overall loss is formed by combining identification losses and verification loss,

where LI1 and LI2 are the identification loss corresponding to the action proposals V1 and V2 respectively. LV is the verification loss. λ≥0 is a tradeoff parameter to balance the contribution of the two parts, and through empirical validation, we find that λ=1 works well in practice.

In this section, we evaluated our proposed method on standard benchmark dataset: THUMOS 2014. We first introduce the evaluation dataset and the experimental settings, then compare our proposed Identification-Verification siamese (IVS) network with some state-of-art approaches.

The temporal action detection THUMOS 2014 dataset is challenging and widely used. The dataset contains two tasks: action recognition and temporal action detection. For action detection, the dataset contains 1010 videos for validation and 1574 videos for testing, both of which are untrimmed videos. For action recognition, the training set is UCF101 of short trimmed videos with no temporal annotations. Following the protocol in [14, 25], we used 200 validation set videos (including 3007 action instances) and 213 test set videos (including 3358 action instances) with temporal annotation to train and evaluate our Identification-Verification network.

The THUMOS 2014 dataset has its own convention of reporting performance metrics, which evaluates Average Precision (AP) for all action categories and calculate mean Average Precision (mAP) for evaluation. We just follow the convention and calculate the mAP at different IoU thresholds. A prediction is correct only when it has the correct category prediction and its temporal IoU with ground truth instance is larger than the overlap threshold. The IoU thresholds used to compare the performances in our experiment are 0.1,0.2,0.3,0.4,0.5.

We implemented our network based on Caffe

[7]. For temporal action detection, we used 200 annotated untrimmed video in THUMOS 2014 validation set as our training set. Firstly, we directly used ActivityNet dataset [1] to finetune the R-C3D model [25] to generate the training and testing proposals. Secondly, we used C3D model [6] parameters to initialize our Identification-Verification network, and trained it with the generated training proposals. We used SGD to learn CNN parameters in our framework, with batch size 5 and momentum 0.9. The initial learning rates were set to 0.001 for our siamese network.

We conducted extensive experiments to demonstrate the effectiveness of our proposed Identification-Verification siamese network for temporal action detection, including the following aspects.

The effect of proposals. For Identification-Verification siamese network, we adopted the SCNN [14] and R-C3D [25] as our proposals generation. For SCNN, we directly put the results of SCNN as proposals to our IVS network, which is termed as SCNN + IVS. For R-C3D, we used ActivityNet [1] dataset to finetune the model which is different from the original paper that was finetuned with UCF101 [16] dataset. We term the method of finetuned with ActivityNet dataset as R-C3D∗. Then the results of R-C3D∗, as proposals, were directly fed to ours IVS network, which is termed as R-C3D∗ + IVS. As shown in TABLE II, we can draw the following conclusions. (1) Compared R-C3D∗ to R-C3D, the results show that finetuned with ActivityNet can obtain better performance than finetuned with UCF101. (2) Our proposed IVS network can be used to improve the performance of previous works, demonstrated by the comparison of R-C3D∗ + IVS to R-C3D∗ and SCNN + IVS to SCNN. (3) Better proposal generations always achieve better detection results. R-C3D∗ performs better than SCNN denoting that R-C3D∗ is a better proposal generations compared to SCNN. This leads to the better performance of R-C3D∗ + IVS compared to SCNN + IVS. The corresponding detection AP results for each category of SCNN, R-C3D∗ and our method with overlap IoU threshold 0.5 are shown in Fig. 5.

In this paper, we propose a Identification-Verification siamese network to get high classification accuracy by reducing intra-action differences and enlarging inter-action variances. The proposed model simultaneously considers identification for action classification and verification for similarity estimation. Experimental results on THUMOS 2014 dataset demonstrate the effectiveness of our proposed siamese network for temporal action detection. Our joint Identification-Verification model also can be easily applied on different proposal generation networks, and achieve significantly improvements compared to other methods in the temporal action detection task.