In this work, we describe our method for tackling the valence-arousal estimation challenge from ABAW2 ICCV-2021 Competition. The competition organizers provide an in-the-wild Aff-Wild2 dataset for participants to analyze affective behavior in real-life settings. We use a two stream model to learn emotion features from appearance and action respectively. To solve data imbalanced problem, we apply label distribution smoothing (LDS) to re-weight labels. Our proposed method achieves Concordance Correlation Coefficient (CCC) of 0.591 and 0.617 for valence and arousal on the validation set of Aff-wild2 dataset. 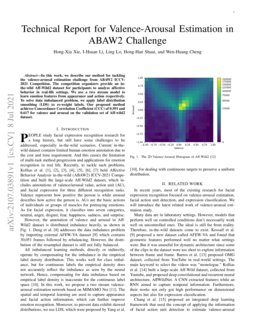 People study facial expression recognition research for a long history, but still have some challenges to be addressed, especially in-the-wild scenarios. Current in-the-wild dataset contains limited human emotion annotation due to the cost and time requirement. And this causes the limitation of multi-task method progression and applications for emotion recognition in real life. Recently, to tackle such problems, Kollias et al. [6], [12], [9], [19], [13], [10], [7]

held Affective Behavior Analysis in-the-wild (ABAW2) ICCV-2021 Competition and built the large-scale Aff-Wild2 dataset, which includes annotations of valence/arousal value, action unit (AU), and facial expression for three different recognition tasks. Valence represents how positive the person is while arousal describes how active the person is. AUs are the basic actions of individuals or groups of muscles for portraying emotions. As for facial expression, it classifies into seven categories, neutral, anger, disgust, fear, happiness, sadness, and surprise.

However, the annotation of valence and arousal in Aff-Wild2 dataset is distributed imbalance heavily, as shown in Fig. 1. Deng et al. [3] addresses the data imbalance problem by importing external AFEW-VA dataset [14] which contains 30,051 frames followed by rebalancing. However, the distribution of the resampled dataset is still not fully balanced.

[18]. In this work, we propose a two stream valence-arousal estimation network based on MIMAMO Net [4]

. The spatial and temporal learning are used to capture appearance and facial action information, which can further improve emotion recognition. Moreover, to prevent data exhibit skewed distributions, we use LDS, which were proposed by Yang et al.

, for dealing with continuous targets to preserve a uniform distribution.

Many data are in laboratory settings. However, models that perform well on controlled conditions don’t necessarily work well on uncontrolled ones. The ideal is still far from reality. Therefore, in-the-wild datasets come to exist. Kossaif et al. [14] proposed a new dataset called AFEW-VA and found that geometric features performed well no matter what settings were. But it was unuseful for dynamic architecture since some of the clips in the dataset were too short to explore information between frame and frame. Barros et al. [1] proposed OMG dataset, collected from YouTube in real-world settings. The main keyword to select the videos was ”monologue.” Kollias et al. [11] built a large-scale Aff-Wild dataset, collected from Youtube, and proposed deep convolutional and recurrent neural architecture, AﬀWildNet. A CNN extracted features while an RNN aimed to capture temporal information. Furthermore, their works not only got high performance on dimensional aspects but also for expression classification.

proposed an integrated deep learning framework that used the concept of applying the information of facial action unit detection to estimate valence-arousal intensity. They had shown that exploring the relationship between AUs and V-A was helpful for V-A research. Pan et al.

tackled regression problems with adversarial learning, which enabled the model to better understand complex emotion and achieved person-independent facial expression recognition. Also, they proposed a contrastive loss function and improved the performance effectively. This study proved the potential of adversarial learning instead of conventional methods on emotion recognition.

Inspired by [4], we build a two-stream network for valence and arousal estimation, as shown in Fig.2

. Specifically, for input images, we first compute their corresponding phase difference images. The spatial stream uses the pre-trained ResNet50 model to extract features of the pool5 layer, then the feature vector are fed into a MLP module to get the final feature vector. While in the temporal stream, it utilizes phase difference images to obtain the relationship among frames. Different from

The Aff-Wild2 is the largest in-the-wild database annotated for valence and arousal. It contains 558 videos with frame-level annotations for valence-arousal estimation, along with facial action unit detection, and expression classification tasks. In this work, we only focus on estimating valence and arousal values, which take values in -1 to 1 and -5 represent no annotated values. In the VA set, there are 422 subjects with 1,932,935 images in the training and validation and 139 subjects with 714,986 images in the test. These cropped and aligned images were all provided by ABAW2 ICCV-2021 Competition organizers.

AffectNet [15] contains more than 1M images collected by Google, Bing, and Yahoo, and it has valence and arousal, facial action unit, and expression annotations for 450,000 images. Notably, this dataset does not have temporal information, so we only apply it to the model without temporal stream.

To measure the agreement between the outputs of the model and the ground truth, the Concordance Correlation Coefficient (CCC) metric is used as follow:

where x and y are the predictions and annotations, μx and μy are the mean values, σ2x and σ2y

are their variances, and

ρ is the correlation coefficient.

The mean value of CCC for valence and arousal estimation will be adopted as the main evaluation criterion of the ABAW2 challenge.

We implemented our network in PyTorch. The network is trained on NVIDIA GTX 2080Ti with 11GB memory.

We merge the training set and validation set and use the cross-validation method to acquire a more accurate estimate of model prediction performance. To apply the Aff-Wild2 dataset, we remove unannotated frames from the beginning and let the remaining ones match its annotation values.

Notably, the test set may encounter missing frames. We address those missing frames by using two different methods to deal with two situations. If the disregarding frames are at the beginning of the video, we label -5 as the prediction. And if the removed frames are not the case of above, we take the predicted value of the previous frame as its estimation.

Our valence CCC and arousal CCC are 0.415 and 0.511 on the validation set. We find that the performance on arousal is better than the performance on valence. Since arousal describes how active the person is, it should be more related to facial motion than valence.

In this subsection, we provide the comparison of different methods on the validation set of Affwild2 (see Table I). Our spatial stream model achieves 0.591 and 0.617 on valence and arousal respectively.

We have conducted valence-arousal estimation in the Aff-Wild2 dataset by introducing a two stream learning network. Moreover, we apply label distribution smoothing (LDS) to tackle data imbalanced problem. Our proposed method achieves Concordance Correlation Coefficient (CCC) of 0.591 and 0.617 for valence and arousal on the validation set of Aff-wild2 dataset. In the future, we will improve the label distribution re-weight mechanism to achieve better performance.