While neural end-to-end text-to-speech (TTS) is superior to conventional statistical methods in many ways, the exposure bias problem in the autoregressive models remains an issue to be resolved. The exposure bias problem arises from the mismatch between the training and inference process, that results in unpredictable performance for out-of-domain test data at run-time. To overcome this, we propose a teacher-student training scheme for Tacotron-based TTS by introducing a distillation loss function in addition to the feature loss function. We first train a Tacotron2-based TTS model by always providing natural speech frames to the decoder, that serves as a teacher model. We then train another Tacotron2-based model as a student model, of which the decoder takes the predicted speech frames as input, similar to how the decoder works during run-time inference. With the distillation loss, the student model learns the output probabilities from the teacher model, that is called knowledge distillation. Experiments show that our proposed training scheme consistently improves the voice quality for out-of-domain test data both in Chinese and English systems. 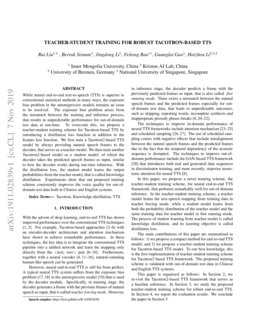 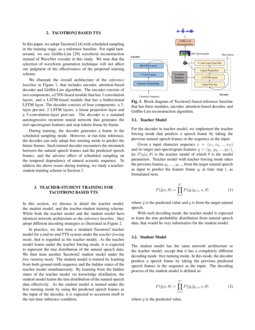 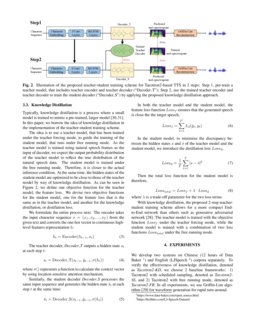 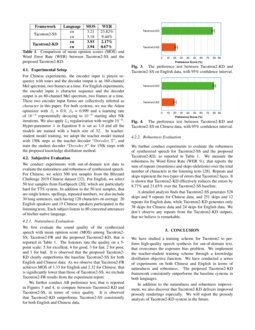 With the advent of deep learning, end-to-end TTS has shown improved performance over the conventional TTS techniques

[27, 30]. For example, Tacotron-based approaches [28, 21, 25, 11] with an encoder-decoder architecture and attention mechanism have shown to achieve remarkable performance. In these techniques, the key idea is to integrate the conventional TTS pipeline into a unified network and learn the mapping only directly from the <text, wav> pair [11, 3, 7, 13, 31]. Furthermore, together with a neural vocoder [15, 6, 21, 14, 22, 23, 24], natural-sounding human-like speech can be generated.

However, neural end-to-end TTS is still far from perfect. A typical neural TTS system suffers from the exposure bias problem [18, 20] in the autoregressive model [10] that is used by the decoder module. Specifically, in training stage, the decoder generates a frame with the previous frames of natural speech as input, that is called teacher forcing mode. However, in inference stage, the decoder predicts a frame with the previously predicted frames as input, that is also called free running mode. There exists a mismatch between the natural speech frames and the predicted frames especially for out-of-domain test data, that leads to unpredictable outcomes, such as skipping, repeating words, incomplete synthesis and inappropriate prosody phrase breaks [7, 19, 32, 12].

The techniques to improve in-domain performance of neural TTS frameworks include attention mechanism [16, 2, 26] and scheduled sampling [1, 9]. The use of scheduled sampling comes with negative effects that include misalignment between the natural speech frames and the predicted frames due to the fact that the temporal dependency of the acoustic sequence is disrupted. The techniques to improve out-of-domain performance include the GAN-based TTS framework [5] that introduces both real and generated data sequences in discriminator training, and more recently, stepwise monotonic attention for neural TTS [7].

This paper is organized as follows: In Section 2, we re-visit the Tacotron2-based TTS framework that serves as a baseline reference. In Section 3, we study the proposed teacher-student training scheme for robust end-to-end TTS. In Section 4, we report the evaluation results. We conclude the paper in Section 5.

In this paper, we adopt Tacotron2 [21] with scheduled sampling in the training stage, as a reference baseline. For rapid turn-around, we use Griffin-Lim [4] waveform reconstruction instead of WaveNet vocoder in this study. We note that the selection of waveform generation technique will not affect our judgment of the effectiveness of the proposed training scheme.

, that includes encoder, attention-based decoder and Griffin-Lim algorithm. The encoder consists of two components, a CNN-based module that has 3 convolution layers, and a LSTM-based module that has a bidirectional LSTM layer. The decoder consists of four components: a 2-layer pre-net, 2 LSTM layers, a linear projection layer and a 5-convolution-layer post-net. The decoder is a standard autoregressive recurrent neural network that generates the mel-spectrogram features and stop tokens frame by frame.

During training, the decoder generates a frame in the scheduled sampling mode. However, at run-time inference, the decoder can only adopt free running mode to predict the future frames. Such trained decoder encounters the mismatch between the natural speech frames and the predicted speech frames, and the adverse effect of scheduled sampling on the temporal dependency of natural acoustic sequence. To address the above issues during training, we study a teacher-student training scheme in Section 3.

3 Teacher-student training for Tacotron2 based TTS

For the decoder in teacher model, we implement the teacher forcing mode that predicts a speech frame by taking the previous natural speech frames in the sequence as the input.

Given a input character sequence x=(x1,x2,...,xT) and its target mel-spectrogram features y=(y1,y2,...,yT′), let P(y|x,θ) is the teacher model of which θ is the model parameters. Teacher model with teacher forcing mode takes the previous frames y1,...,yt−1 from the target natural speech as input to predict the feature frame yt at time step t, as formulated next,

where ^y is the predicted value and y is from the target natural speech.

With such decoding mode, the teacher model is expected to learn the true probability distribution from natural speech data, that would be very informative for the student model.

The student model has the same network architecture as the teacher model, except that it has a completely different decoding mode: free running mode. In this mode, the decoder predicts a speech frame by taking the previous predicted speech frames in the sequence as the input. The decoding process of the student model is defined as:

where ^y is the predicted value.

We formulate the entire process next. The encoder takes the input character sequence x=(x1,x2,...,xT)

The teacher decoder, Decoder_T outputs a hidden state st at each step t:

where σ() represents a function to calculate the context vector by using location-sensitive attention mechanism.

Similarly, the student decoder Decoder_S processes the same input sequence and generates the hidden state ^st at each step t at the same time:

In both the teacher model and the student model, the feature loss function Lossf ensures that the generated speech is close the the target speech,

Then the total loss function for the student model is therefore,

where λ is a trade-off parameter for the two loss terms.

With knowledge distillation, the proposed 2-step teacher-student training scheme allows for a more compact End-to-End network than others such as generative adversarial network[5]. The teacher model is trained with the objective function Lossf under the teacher forcing mode, while the student model is trained with a combination of two loss functions Losstotal under the free running mode.

We conduct experiments with out-of-domain test data to evaluate the naturalness and robustness of synthesized speech. For Chinese, we select 500 test samples from the Blizzard Challenge 2019 Chinese dataset [17]. For English, we select 50 test samples from FastSpeech [19], which are particularly hard for TTS system. In addition to the 50 test samples, that are single letters, spellings, repeated numbers, we also include 30 long sentences, each having 128 characters on average. 20 English speakers and 15 Chinese speakers participated in the listening tests. Each subject listens to 80 converted utterances of his/her native language.

We further conduct AB preference test, that is reported in Figures 3 and 4, to compare between Tacotron2-KD and Tacotron2-SS, in terms of voice quality. It is observed that Tacotron2-KD outperforms Tacotron2-SS consistently for both English and Chinese data.

We further conduct experiments to evaluate the robustness of synthesized speech for Tacotron2-SS and the proposed Tacotron2-KD, as reported in Table 1. We measure the robustness by Word Error Rate (WER %), that reports the sum of repeats (insertions) and skips (deletions) over the total number of characters in the listening tests [5]. Repeats and skips represent the two types of errors that Tacotron2 faces. It is shown that Tacotron2-KD effectively reduces the errors by 8.77% and 21.65% over the Tacotron2-SS baseline.

We have studied a training scheme for Tacotron2 to perform high-quality speech synthesis for out-of-domain text, that overcomes the exposure bias problem. We implement the teacher-student training scheme through a knowledge distillation objective function. We have conducted a series of experiments on both Chinese and English in terms of naturalness and robustness. The proposed Tacotron2-KD framework consistently outperforms the baseline systems in both languages.

In addition to the naturalness and robustness improvement, we also discover that Tacotron2-KD delivers improved prosody renderings especially. We will report the prosody analysis of Tacotron2-KD system in the future.