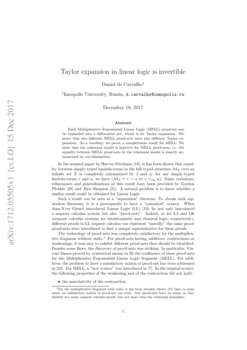 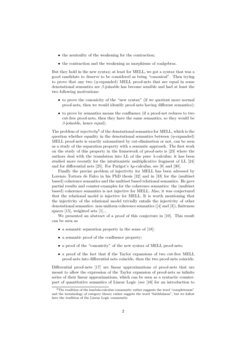 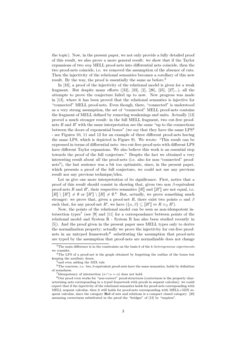 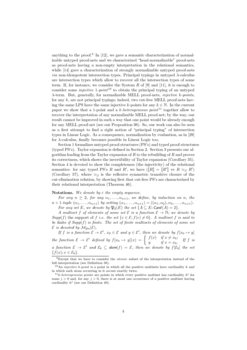 We associate to every proof structure in multiplicative linear logic an ...
Daniel Murfet, et al. ∙

In this paper, we show how to interpret a language featuring concurrency...
Yann Hamdaoui, et al. ∙

We introduce the notion of coherent graphs, and show how those can be us...
Lê Thành Dũng Nguyên, et al. ∙

We introduce the syntactical objects we are interested in. As recalled in the introduction, correctness does not play any role, that is why we do not restrict our nets to be correct and we rather consider proof-structures (PS’s). Since it is convenient to represent formally our proof using differential nets possibly with boxes (differential PS’s), we define PS’s as differential PS’s satisfying some conditions (Definition 1.1). More generally, differential in-PS’s are defined by induction on the depth, which is the maximum level of box nesting: Definition 1.1, Definition 1.1 and Definition 1.1 concern what happens at depth 0, i.e. whenever there is no box; in particular, typed ground-structures allow to represent proofs of the multiplicative fragment (MLL).

Notice that, although we depict cuts as wires131313like wires between principal ports in the formalism of interaction nets [24] (but, in contrast with interaction nets, Definition 1.1 allows axiom-cuts) (see the content of the box o3 of the PS R - the third leftmost box at depth 0 of Figure 11, p. 11 - for an example of a cut), cuts are not elements of the set W. A wire p∈W goes from a port that has the same name p to its target t(p); instead of using arrows in our figures to indicate the direction, we will use the following convention: Unless l(p)=ax (but in this case there is no ambiguity since such a port p can never be the target of any wire), whenever a wire goes from p to some port q, it will be depicted by an edge reaching underneath the vertice corresponding to p.

Given a pre-net G, we denote by ≤G the reflexive transitive closure of the binary relation PG on P(G) defined by (PG(q,p)⇔tG(p)=q).

Types will be used only in Subsection 4.2. We introduce them right now in order to help the reader to see how ground-structures can represent MLL proofs.

and, for any p∈P(G), the following properties hold:

Notice that the ports labelled by “\oc” are completely symmetric to the ports labelled by “\wn”: They can have any number of premises and the typing rule systematically introduces the connector \oc (see Figure 2, while in [17], there were three different kinds of cells: co-weakenings (of arity 0) and co-derelictions (of arity 1) that introduce the connector \oc, and co-contractions (of arity 2) that do not modify the type (see Figure 2).

As we wrote in the introduction, the motivation for proof-nets was to have a canonical object to represent different sequent calculus proofs that should be identified. For instance, Figure 4, Figure 4 and Figure 5 are three different sequent calculus proofs of the same sequent,151515We underline some occurrences of propositional variables in order to distinguish between different occurrences of the same propositional variable instead of using explicitly the exchange rule. but the two first proofs are two different sequentializations of the same typed proof-net (R′,T′) depicted in Figure 7, while the third proof is a sequentialization of the typed proof-net (R′′,T′′) depicted in Figure 7. Let G′ (resp. G′′) be the ground-structure that corresponds to the proof-net R′ (resp. R′′).

We can now define our notion of PS: We recall that this notion formalizes Danos & Regnier’s new syntax, and not Girard’s original syntax. Figure 10, Figure 10 and Figure 10 illustrate some differences between the two syntaxes: Figure 10 and Figure 10 are two different objects in the original syntax, both of them are represented in the new syntax by the PS that is depicted in Figure 10. In particular, in the new syntax, auxiliary doors of boxes are always premises of contractions. Since between auxiliary doors and contractions several box boundaries might be crossed, we need the auxiliary notion of (differential) in-PS. Concerning differential PS’s, it is worth noticing that the content of each of their boxes is an in-PS, in particular every \oc-port inside is always the main door of a box.

In the absence of axioms and cuts, our definition of PS through in-PS’s is equivalent to our definition of PS in Definition 4 of [10] through ∘-PS’s. We removed ∘-ports because we simplified the proof of Proposition 3.2 and after this simplification they would not play any role any more (actually we introduced a syntactic construction232323See Definition 1.3 that, roughly speaking, can be seen as a partial recovery of these ∘-ports).

For any simple differential nets G and G′, an isomorphism φ from G to G′ is a bijection P(G)≃P(G′) such that:

We write φ:G≃G′ to denote that φ is an isomorphism from G to G′; we write G≃G′ if there exists φ such that φ:G≃G′.

We write φ:S≃S′ to denote that φ is an isomorphism from S to S′; we write S≃S′ if there exists φ such that φ:S≃S′.

Now, if T and T′ are two sets of differential in-PS’s, we write T≡T′ if there exists a bijection φ:T≃T′ such that, for any T∈T, we have T≡φ(T).

Another variant of the notion of isomorphism will be defined in the next subsection (Definition 1.3). A special case of isomorphism consists in renaming only ports at depth 0:

Let S and S′ be two differential in-PS’s. Let φ be a bijection P≃P′, where P′∩(P0(S)∖P)=∅. We say that S′ is obtained from S by renaming the ports via φ and we write S′=S[φ] if the following properties hold: