This work addresses two important questions pertinent to Relation Extraction (RE). First, what are all possible relations that could exist between any two given entity types? Second, how do we define an unambiguous taxonomical (is-a) hierarchy among the identified relations? To address the first question, we use three resources Wikipedia Infobox, Wikidata, and DBpedia. This study focuses on relations between person, organization and location entity types. We exploit Wikidata and DBpedia in a data-driven manner, and Wikipedia Infobox templates manually to generate lists of relations. Further, to address the second question, we canonicalize, filter, and combine the identified relations from the three resources to construct a taxonomical hierarchy. This hierarchy contains 623 canonical relations with highest contribution from Wikipedia Infobox followed by DBpedia and Wikidata. The generated relation list subsumes an average of 85 restricted. 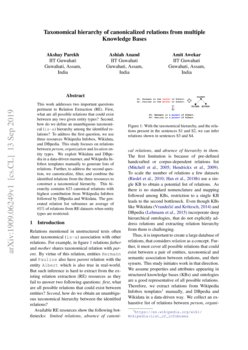 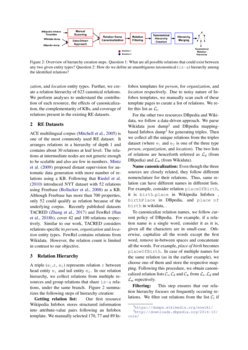 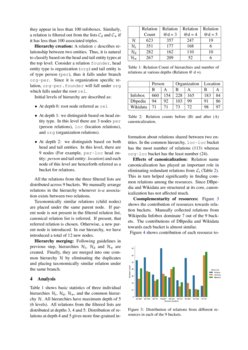 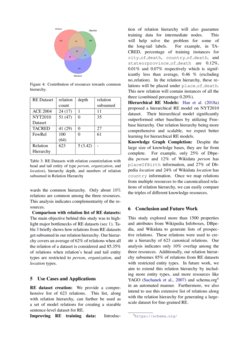 A Hierarchical Framework for Relation Extraction with Reinforcement Learning

Most existing methods determine relation types only after all the entiti...
Ryuichi Takanobu, et al. ∙

Generating Categories for Sets of Entities

Relations mentioned in unstructured texts often share taxonomical (is-a) association with other relations. For example, in figure 1 relations father and mother shares taxonomical relation with parent. By virtue of this relation, entities Hermann and Pauline also have parent relation with the entity Albert which is also true in real-world. But such inference is hard to extract from the existing relation extraction (RE) resources as they fail to answer two following questions: first, what are all possible relations that could exist between entities? Second, how do we obtain an unambiguous taxonomical hierarchy between the identified relations?

Available RE resources show the following bottlenecks: limited relations, absence of canonical relations, and absence of hierarchy in them. The first limitation is because of pre-defined handcrafted or corpus-dependent relations list Mitchell et al. (2005); Hendrickx et al. (2009). To scale the number of relations a few datasets Riedel et al. (2010); Han et al. (2018b) use a single KB to obtain a potential list of relations. As there is no standard nomenclature and mapping followed among KBs, restriction to a single KB leads to the second bottleneck. Even though KBs like Wikidata Vrandečić and Krötzsch (2014) and DBpedia Lehmann et al. (2015) incorporate deep hierarchical ontologies, that do not explicitly address relations and extracting relation hierarchy from them is challenging.

Thus, it is important to create a large database of relations, that considers relation as a concept. Further, it must cover all possible relations that could exist between a pair of entities, taxonomical and semantic association between relations, and their synsets. This study initiates work in that direction. We assume properties and attributes appearing in structured knowledge bases (KBs) and ontologies are a good representative of all possible relations. Therefore, we extract relations from Wikipedia Infobox templates111https://en.wikipedia.org/wiki/Wikipedia:List_of_infoboxes manually, and DBpedia and Wikidata in a data-driven way. We collect an exhaustive list of relations between person, organization, and location entity types. Further, we create a relation hierarchy of 623 canonical relations. We perform analyses to understand the contribution of each resource, the effects of canonicalization, the complementarity of KBs, and coverage of relations present in the existing RE datasets.

ACE multilingual corpus Mitchell et al. (2005) is one of the most commonly used RE dataset. It arranges relations in a hierarchy of depth 1 and contains about 30 relations at leaf level. The relations at intermediate nodes are not generic enough to be scalable and also are few in numbers. Mintz et al. (2009) proposed distant supervision for automatic data generation with more number of relations using a KB. Following that Riedel et al. (2010) introduced NYT dataset with 52 relations using Freebase Bollacker et al. (2008) as a KB. Although Freebase has more than 700 properties, only 52 could qualify as relation because of the underlying corpus. Recently published datasets TACRED Zhang et al. (2017) and FewRel Han et al. (2018b), cover 42 and 100 relations respectively. Similar to our work, TACRED considers relations specific to person, organization and location entity types. FewRel contains relations from Wikidata. However, the relation count is limited in contrast to our objective.

Getting relation list: Our first resource Wikipedia Infobox stores structured information into attribute-value pairs following an Infobox template. We manually selected 170, 77 and 89 Infobox templates for person, for organization, and location respectively. Due to noisy nature of Infobox templates, we manually scan each of these template pages to curate a list of relations. We refer this list as L\textsubscripti.

For the other two resources DBpedia and Wikidata, we follow a data-driven approach. We parse Wikidata json dump222https://dumps.wikimedia.org/enwiki/ and DBpedia mapping-based Infobox dump333http://downloads.dbpedia.org/2016-10/core/ for generating triples. Then we collect all the unique relations from the triples dataset (where e1 and e2 is one of the three type person, organization, and location). The two lists of relations are henceforth referred as L\textsubscriptd (from DBpedia) and L\textsubscriptw (from Wikidata).

Name canonicalization: Even though the three sources are closely related, they follow different nomenclature for their relations. Thus, same relation can have different names in different lists. For example, consider relation placeOfBirth, it is birth_place in Wikipedia Infobox , birthPlace in DBpedia, and place of birth in wikidata, .

describes relationship between two entities. Thus, it is natural to classify based on the head and tail entity types at the top level. Consider a relation

Initial levels of hierarchy are described as:

All the relations from the three filtered lists are distributed across 9 buckets. We manually arrange relations in the hierarchy whenever is-a association exists between two relations.

Hierarchy merging: Following guidelines in previous step, hierarchies H\textsubscripti, H\textsubscriptd and H\textsubscriptw are created. Finally, they are merged into one common hierarchy H by eliminating the duplicates and placing taxonomically similar relation under the same branch.

Coomplementarity of resources: Figure 3 shows the contribution of resources towards relation buckets. Manually collected relations from Wikipedia Infobox dominate 7 out of the 9 buckets. The contributions of DBpedia and Wikidata towards each bucket is almost similar.

Figure 4 shows contribution of each resource towards the common hierarchy. Only about 10% relations are common among the three resources. This analysis indicates complementarity of the resources.

5 Use Cases and Applications

RE dataset creation: We provide a comprehensive list of 623 relations. This list, along with relation hierarchy, can further be used as a set of model relations for creating a sizeable sentence-level dataset for RE. Improving RE training data: Introduction of relation hierarchy will also guarantee training data for intermediate nodes. This will help solve the problem for some of the long-tail labels. For example, in TACRED, percentage of training instances for city_of_death, country_of_death, and stateorprovince_of_death are 0.12%, 0.01% and 0.07% respectively which is significantly less than average, 0.46 % (excluding no_relation). In the relation hierarchy, these relations will be placed under place_of_death. This new relation will contain instances of all the three (combined percentage 0.20%). Hierarchical RE Models: Han et al. (2018a) proposed a hierarchical RE model on NYT2010 dataset. Their hierarchical model significantly outperformed other baselines by utilizing Freebase hierarchy. Our relation hierarchy being more comprehensive and scalable, we expect better learning for hierarchical RE models. Knowledge Graph Completion: Despite the large size of knowledge bases, they are far from complete. For example, only 25% of Dbpedia person and 12% of Wikidata person has placeOfBirth information, and 27% of Dbpedia location and 24% of Wikidata location has country information. Once we map relations from multiple resources to the canonicalized relations of relation hierarchy, we can easily compare the triples of different knowledge resources.

This study explored more than 1500 properties and attributes from Wikipedia Infoboxes, DBpedia, and Wikidata to generate lists of prospective relations. These relations were used to create a hierarchy of 623 canonical relations. Our analysis indicates only 10% overlap among the three resources. Additionally, our relation hierarchy subsumes 85% of relations from RE datasets with restricted entity types. In future work, we aim to extend this relation hierarchy by including more entity types, and more resources like YAGO Suchanek et al. (2007) and schema.org444https://schema.org/ in an automated manner. Furthermore, we also intend to use this extensive list of relations along with the relation hierarchy for generating a large-scale dataset for fine-grained RE.