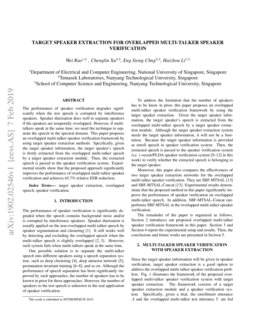 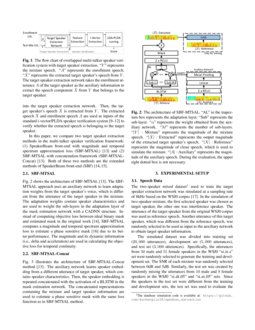 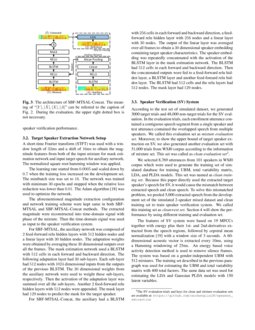 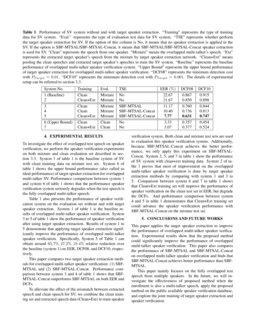 A Real-time Speaker Diarization System Based on Spatial Spectrum

In multi-speaker applications is common to have pre-computed models from...
Carlos Rodrigo Castillo-Sanchez, et al. ∙

To extract the voice of a target speaker when mixed with a variety of ot...
Shell Xu Hu, et al. ∙

The performance of speaker verification is significantly degraded when the speech contains background noise and/or is corrupted by interference speakers. Speaker diarization is usually applied on the non-overlapped multi-talker speech by speaker segmentation and clustering [1]. It still works well by detecting and excluding the overlapped speech when the multi-talker speech is slightly overlapped [2, 3]. However, such system fails when multi-talkers speak at the same time.

One possible solution is to separate the multi-talker speech into different speakers using a speech separation system, such as deep clustering [4], deep attractor network [5], permutation invariant training [6, 7, 8], and so on. Although the performance of speech separation has been significantly improved by such approaches, the number of speakers has to be known in prior for these approaches. However, the number of speakers in the test speech is unknown in the real application of speaker verification.

The remainder of the paper is organized as follows. Section 2 introduces our proposed overlapped multi-talker speaker verification framework in this paper. Section 3 and Section 4 report the experimental setup and results. Then, the conclusions and future works are presented in Section 5.

In this paper, we compare two target speaker extraction methods in the multi-talker speaker verification framework: (1) SpeakerBeam front-end with magnitude and temporal spectrum approximation loss (SBF-MTSAL) [13] and (2) SBF-MTSAL with concatenation framework (SBF-MTSAL-Concat) [13]. Both of these two methods are the extended methods of SpeakerBeam front-end (SBF) [14, 15].

Fig. 2 shows the architecture of SBF-MTSAL [13]

. The SBF-MTSAL approach uses an auxiliary network to learn adaptation weights from the target speaker’s voice, which is different from the utterance of the target speaker in the mixture. The adaptation weights contain speaker characteristics and are used to weight the sub-layers in the adaptation layer of the mask estimation network with a CADNN structure. Instead of computing objective loss between ideal binary mask and estimated mask in the original work

[14], SBF-MTSAL computes a magnitude and temporal spectrum approximation loss to estimate a phase sensitive mask [16] due to its better performance. The magnitude and its dynamic information (i.e., delta and acceleration) are used in calculating the objective loss for temporal continuity.

. The auxiliary network learns speaker embedding from a different utterance of target speaker, which contains speaker characteristics. Then, the speaker embedding is repeated concatenated with the activation of a BLSTM in the mask estimation network. The concatenated representations containing the mixture and target speaker information are used to estimate a phase sensitive mask with the same loss function as in SBF-MTSAL method.

32ms and a shift of 16ms to obtain the magnitude features from both of the input mixture for mask estimation network and input target speech for auxiliary network. The normalized square root hamming window was applied.

The learning rate started from 0.0005 and scaled down by 0.7 when the training loss increased on the development set. The minibatch size was set to 16. The network was trained with minimum 30epochs and stopped when the relative loss reduction was lower than 0.01. The Adam algorithm [18] was used to optimize the network.

For SBF-MTSAL, the auxiliary network was composed of 2

512 hidden nodes and a linear layer with 30 hidden nodes. The adaptation weights were obtained by averaging these 30 dimensional outputs over all the frames. The mask estimation network used a BLSTM with 512 cells in each forward and backward direction. The following adaptation layer had 30 sub-layers. Each sub-layer had 512 nodes with 1024 dimensional inputs from the outputs of the previous BLSTM. The 30 dimensional weights from the auxiliary network were used to weight these sub-layers, respectively. Then the activation of the adaptation layer was summed over all the sub-layers. Another 2 feed-forward relu hidden layers with 512 nodes were appended. The mask layer had 129 nodes to predict the mask for the target speaker.

For SBF-MTSAL-Concat, the auxiliary had a BLSTM with 256 cells in each forward and backward direction, a feed-forward relu hidden layer with 256 nodes and a linear layer with 30 nodes. The output of the linear layer was averaged over all frames to obtain a 30 dimensional speaker embedding containing target speaker characteristics. The speaker embedding was repeatedly concatenated with the activation of the BLSTM layer in the mask estimation network. The BLSTM had 512 cells in each forward and backward direction. Then the concatenated outputs were fed to a feed-forward relu hidden layer, a BLSTM layer and another feed-foreard relu hidden layer. The BLSTM had 512 cells and the relu layers had 512 nodes. The mask layer had 129 nodes.

We selected 8,769 utterances from 101 speakers in WSJ0 corpus which were used to generate the training set of simulated database for training UBM, total variability matrix, LDA, and PLDA models. This set was named as clean training set. Because this paper directly used the extracted target speaker’s speech for SV, it would cause the mismatch between extracted speech and clean speech. To solve this mismatched problem, we pooled 5,000 extracted speech from the development set of the simulated 2-speaker mixed dataset and clean training set to train speaker verification system. We called this training set as clean+ext set. Section 4 will show the performance by using different training and evaluation set.

The features of SV system were based on 19 MFCCs together with energy plus their 1st- and 2nd-derivatives extracted from the speech regions, followed by cepstral mean normalization [19] with a window size of 3 seconds. A 60-dimensional acoustic vector is extracted every 10ms, using a Hamming windowing of 25ms. An energy based voice activity detection method is used to remove silence frames. The system was based on a gender-independent UBM with 512 mixtures. The training set described in the previous paragraph was used for estimating the UBM and total variability matrix with 400 total factors. The same data set was used for estimating the LDA and Gaussian PLDA models with 150 latent variables.

This paper compares two target speaker extraction methods for overlapped multi-talker speaker verification: (1) SBF-MTSAL and (2) SBF-MTSAL-Concat. Performance comparison between system 3 and 4 of table 1 shows that SBF-MTSAL-Concat outperforms SBF-MTSAL on both EER and DCFs.

This paper mainly focuses on the fully overlapped test speech from multiple speakers. In the future, we will investigate the effectiveness of proposed method when the enrollment is also a multi-talker speech, apply the proposed method on the public available speaker verification database, and explore the joint training of target speaker extraction and speaker verification.