We discuss the use of projects in first-year graduate complexity theory courses. 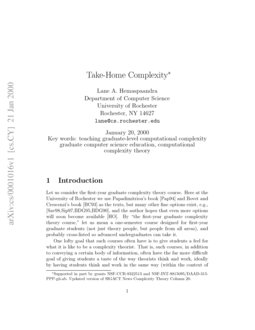 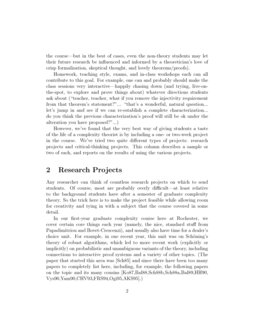 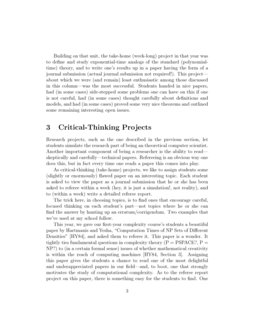 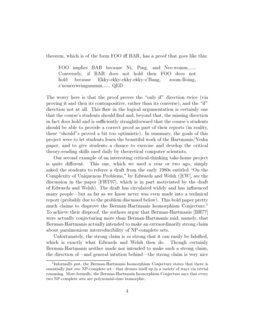 Our team Hibikino-Musashi@Home was founded in 2010. It is based in Kitak...
Sansei Hori, et al. ∙

Privacy at Home: an Inquiry into Sensors and Robots for the Stay at Home Elderly

The elderly in the future will use smart house technology, sensors, and ...
Trenton Schulz, et al. ∙

Interaction and Autonomy in RoboCup@Home and Building-Wide Intelligence

The Impact of Working From Home on the Success of Scrum Projects: A Multi-Method Study

2020 State of the Octoverse: Finding Balance Between Work and Play

Over the past year, many developers and other technology professionals h...
Nicole Forsgren, et al. ∙

Let us consider the first-year graduate complexity theory course. Here at the University of Rochester we use Papadimitriou’s book [Pap94] and Bovet and Crescenzi’s book [BC93] as the texts, but many other fine options exist, e.g., [Sav98, Sip97, BDG95, BDG90], and the author hopes that even more options will soon become available [HO]

. By “the first-year graduate complexity theory course,” let us mean a one-semester course designed for first-year graduate students (not just theory people, but people from all areas), and probably cross-listed so advanced undergraduates can take it.

One lofty goal that such courses often have is to give students a feel for what it is like to be a complexity theorist. That is, such courses, in addition to conveying a certain body of information, often have the far more difficult goal of giving students a taste of the way theorists think and work, ideally by having students think and work in the same way (within the context of the course—but in the best of cases, even the non-theory students may let their future research be influenced and informed by a theoretician’s love of crisp formalization, skeptical thought, and lovely theorems/proofs).

Homework, teaching style, exams, and in-class workshops each can all contribute to this goal. For example, one can and probably should make the class sessions very interactive—happily chasing down (and trying, live-on-the-spot, to explore and prove things about) whatever directions students ask about (“teacher, teacher, what if you remove the injectivity requirement from that theorem’s statement?”… “that’s a wonderful, natural question… let’s jump in and see if we can re-establish a complete characterization… do you think the previous characterization’s proof will still be ok under the alteration you have proposed?”…)

However, we’ve found that the very best way of giving students a taste of the life of a complexity theorist is by including a one- or two-week project in the course. We’ve tried two quite different types of projects: research projects and critical-thinking projects. This column describes a sample or two of each, and reports on the results of using the various projects.

Any researcher can think of countless research projects on which to send students. Of course, most are probably overly difficult—at least relative to the background students have after a semester of graduate complexity theory. So the trick here is to make the project feasible while allowing room for creativity and tying in with a subject that the course covered in some detail.

In our first-year graduate complexity course here at Rochester, we cover certain core things each year (namely, the nice, standard stuff from Papadimitriou and Bovet-Crescenzi), and usually also have time for a dealer’s choice unit. For example, in one recent year, this unit was on Schöning’s theory of robust algorithms, which led to more recent work (explicitly or implicitly) on probabilistic and unambiguous variants of the theory, including connections to interactive proof systems and a variety of other topics. (The paper that started this area was [Sch85] and since there have been too many papers to completely list here, including, for example, the following papers on the topic and its many cousins [Ko87, Bal88, Sch88b, Sch88a, Bal89, HH90, Vys90, Yam90, CHV93, FRS94, Ogi95, AKS95].)

Building on that unit, the take-home (week-long) project in that year was to define and study exponential-time analogs of the standard (polynomial-time) theory, and to write one’s results up in a paper having the form of a journal submission (actual journal submission not required!). This project—about which we were (and remain) least enthusiastic among those discussed in this column—was the most successful. Students handed in nice papers, had (in some cases) side-stepped some problems one can have on this if one is not careful, had (in some cases) thought carefully about definitions and models, and had (in some cases) proved some very nice theorems and outlined some remaining interesting open issues.

Research projects, such as the one described in the previous section, let students simulate the research part of being an theoretical computer scientist. Another important component of being a researcher is the ability to read—skeptically and carefully—technical papers. Refereeing is an obvious way one does this, but in fact every time one reads a paper this comes into play.

As critical-thinking (take-home) projects, we like to assign students some (slightly or enormously) flawed paper on an interesting topic. Each student is asked to view the paper as a journal submission that he or she has been asked to referee within a week (hey, it is just a simulation!, not reality), and to (within a week) write a detailed referee report.

The trick here, in choosing topics, is to find ones that encourage careful, focused thinking on each student’s part—not topics where he or she can find the answer by hunting up an erratum/corrigendum. Two examples that we’ve used at my school follow.

This year, we gave our first-year complexity course’s students a beautiful paper by Hartmanis and Yesha, “Computation Times of NP Sets of Different Densities” [HY84], and asked them to referee it. This paper is a wonder. It tightly ties fundamental questions in complexity theory (P=PSPACE?, P=NP?) to (in a certain formal sense) issues of whether mathematical creativity is within the reach of computing machines [HY84, Section 3]. Assigning this paper gives the students a chance to read one of the most delightful and underappreciated papers in our field—and, to boot, one that strongly motivates the study of computational complexity. As to the referee report project on this paper, there is something easy for the students to find. One theorem, which is of the form FOO iff BAR, has a proof that goes like this:

The worry here is that the proof proves the “only if” direction twice (via proving it and then its contrapositive, rather than its converse), and the “if” direction not at all. This flaw in the logical argumentation is certainly one that the course’s students should find and, beyond that, the missing direction in fact does hold and is sufficiently straightforward that the course’s students should be able to provide a correct proof as part of their reports (in reality, these “should”s proved a bit too optimistic). In summary, the goals of this project were to let students learn the beautiful work of the Hartmanis/Yesha paper, and to give students a chance to exercise and develop the critical theory-reading skills used daily by theoretical computer scientists.

Unfortunately, the strong claim is so strong that it can easily be falsified, which is exactly what Edwards and Welsh then do. Though certainly Berman-Hartmanis neither made nor intended to make such a strong claim, the direction of—and general intution behind—the strong claim is very nice and interesting. In fact, it is at least plausible to conjecture that NP-complete sets may have even more in common than mere isomorphism (and, indeed, many natural sets do have more in common), and many papers have wondered just what that “more” may be. One could say that this general type of intuition has led people to such notions as structure-preserving reductions [LL78, ADP80], witness-isomorphic reductions [FHT97], universal relations [AB92, Bis95, BKT98], and much more.

The students’ results on this one were mixed. Almost all picked up that something was very strange, but their referee reports varied as to the clarity with which they pinpointed the problem. In some sense, this is a more demanding assignment than the Hartmanis-Yesha one, as the problem is not one of a pure error in logical flow, but rather is that here one must argue against the authors’ opinion about what was in the minds of Berman and Hartmanis—and what is actually the most natural expansive version of Berman and Hartmanis’s insightful conjecture (which, to this very day, remains open, though dozens of papers have been written on the topic; a nice survey by Kurtz, Mahaney, and Royer covers the progress up to about nine years ago [KMR90], and the study of isomorphism results has also been quite active in the years since that survey, see, for example, [FFKL93, Rog97, AAR98]).

I am very grateful to Eric Allender, Someth Biswas, and Lance Fortnow for pointers to the literature and other help. None of them has read the article, so none of them are to blame for any errors here and, though we consult each other carefully about various aspects of our course designs, my UR theory colleagues (the plural pronoun prose style notwithstanding) are in no way to blame for the opinions/projects described here.