Transformer neural networks (TNN) demonstrated state-of-art performance on many natural language processing (NLP) tasks, replacing recurrent neural networks (RNNs), such as LSTMs or GRUs. However, TNNs did not perform well in speech enhancement, whose contextual nature is different than NLP tasks, like machine translation. Self-attention is a core building block of the Transformer, which not only enables parallelization of sequence computation, but also provides the constant path length between symbols that is essential to learning long-range dependencies. In this paper, we propose a Transformer with Gaussian-weighted self-attention (T-GSA), whose attention weights are attenuated according to the distance between target and context symbols. The experimental results show that the proposed T-GSA has significantly improved speech-enhancement performance, compared to the Transformer and RNNs. 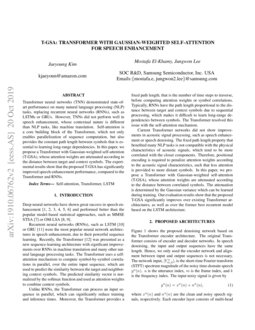 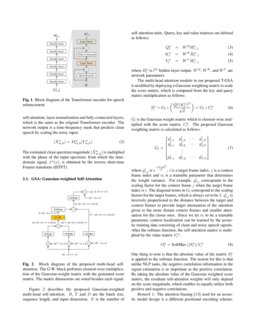 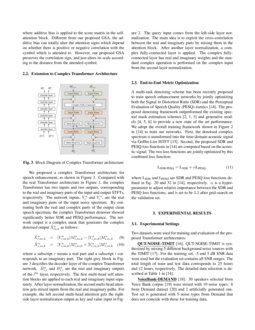 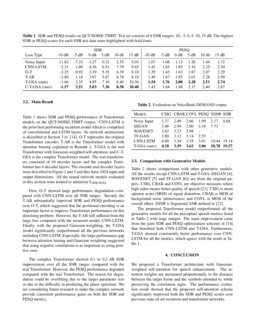 On the Locality of Attention in Direct Speech Translation

A Cognitive Study on Semantic Similarity Analysis of Large Corpora: A Transformer-based Approach

Why Self-Attention? A Targeted Evaluation of Neural Machine Translation Architectures

Recurrent neural networks (RNNs), such as LSTM [9] or GRU [1] were the most popular neural network architectures in speech enhancement, due to their powerful sequence learning. Recently, the Transformer [20]

was presented as a new sequence-learning architecture with significant improvements over RNNs in machine translation and many other natural language processing tasks. The Transformer uses a self-attention mechanism to compute symbol-by-symbol correlations in parallel, over the entire input sequence, which are used to predict the similarity between the target and neighboring context symbols. The predicted similarity vector is normalized by the softmax function and used as attention weights to combine context symbols.

Unlike RNNs, the Transformer can process an input sequence in parallel, which can significantly reduce training and inference times. Moreover, the Transformer provides a fixed path length, that is the number of time steps to traverse, before computing attention weights or symbol correlations. Typically, RNNs have the path length proportional to the distance between target and context symbols due to sequential processing, which makes it difficult to learn long-range dependencies between symbols. The Transformer resolved this issue with the self-attention mechanism.

Current Transformer networks did not show improvements in acoustic signal processing, such as speech enhancement or speech denoising. The fixed path length property that benefited many NLP tasks is not compatible with the physical characteristics of acoustic signals, which tend to be more correlated with the closer components. Therefore, positional encoding is required to penalize attention weights according to the acoustic signal characteristics, such that less attention is provided to more distant symbols. In this paper, we propose a Transformer with Gaussian-weighted self-attention (T-GSA), whose attention weights are attenuated according to the distance between correlated symbols. The attenuation is determined by the Gaussian variance which can be learned during training. Our evaluation results show that the proposed T-GSA significantly improves over existing Transformer architectures, as well as over the former best recurrent model based on the LSTM architecture.

, is the short-time Fourier transform (STFT) spectrum magnitude of the noisy time-domain speech

yu(n). u is the utterance index, m is the frame index, and k is the frequency index. The input noisy signal is given by

where xu(n) and nu(n) are the clean and noisy speech signals, respectively. Each encoder layer consists of multi-head self-attention, layer normalization and fully-connected layers, which is the same as the original Transformer encoder. The network output is a time-frequency mask that predicts clean speech by scaling the noisy input:

|^Xum,k| is multiplied with the phase of the input spectrum, from which the time-domain signal, ^xu(n), is obtained by the inverse short-time Fourier transform (ISTFT).

Figure 2 describes the proposed Gaussian-weighted multi-head self-attention. B, T and D are the batch size, sequence length, and input dimension. E is the number of self-attention units. Query, key and value matrices are defined as follows:

The multi-head attention module in our proposed T-GSA is modified by deploying a Gaussian weighting matrix to scale the score matrix, which is computed from the key and query matrix multiplication as follows:

Gl is the Gaussian weight matrix which is element-wise multiplied with the score matrix, Cul. The proposed Gaussian weighting matrix is calculated as follows:

where gli,j is e−|i−j|2σ2l, i is a target frame index, j is a context frame index and σl is a trainable parameter that determines the weight variance. For example, gli,j corresponds to the scaling factor for the context frame j when the target frame index is i. The diagonal terms in Gl correspond to the scaling factors for the target frames, which is always set to be 1. gli,j is inversely proportional to the distance between the target and context frames to provide larger attenuation of the attention given to the more distant context frames and smaller attenuation for the closer ones. Since we let σl to be a trainable parameter, context localization can be learned by the acoustic training data consisting of clean and noisy speech signals. After the softmax function, the self-attention matrix is multiplied by the value matrix Vul:

Remark 1: The attention biasing [17] used for an acoustic model design is a different positional encoding scheme, where additive bias is applied to the score matrix in the self-attention block. Different from our proposed GSA, the additive bias can totally alter the attention signs which depend on whether there is positive or negative correlation with the symbol which is attended to. However, our proposed GSA preserves the correlation sign, and just alters its scale according to the distance from the attended symbol.

A multi-task denoising scheme has been recently proposed to train speech enhancement networks by jointly optimizing both the Signal to Distortion Ratio (SDR) and the Perceptual Evaluation of Speech Quality (PESQ) metrics [11]. The proposed denoising framework outperformed the existing spectral mask estimation schemes [6, 12, 22] and generative models [13, 15, 16] to provide a new state of the art performance. We adopt the overall training framework shown in Figure 2 in [11] to train our networks. First, the denoised complex spectrum is transformed into the time-domain acoustic signal via Griffin-Lim ISTFT [8]

. Second, the proposed SDR and PESQ loss functions in

[11] are computed based on the acoustic signal. The two loss functions are jointly optimized by this combined loss function:

Two datasets were used for training and evaluation of the proposed Transformer architectures:

QUT-NOISE-TIMIT [3]: QUT-NOISE-TIMIT is synthesized by mixing 5 different background noise sources with the TIMIT [7]. For the training set, -5 and 5 dB SNR data were used but the evaluation set contains all SNR ranges. The total length of train and test data corresponds to 25 hours and 12 hours, respectively. The detailed data selection is described at Table 1 in [11].

VoiceBank-DEMAND [19]: 30 speakers selected from Voice Bank corpus [21] were mixed with 10 noise types: 8 from Demand dataset [18] and 2 artificially generated one. Test set is generated with 5 noise types from Demand that does not coincide with those for training data.

Table 1 shows SDR and PESQ performance of Transformer models on the QUT-NOISE-TIMIT corpus. CNN-LSTM is the prior best performing recurrent model which is comprised of convolutional and LSTM layers. Its network architecture is described at Section 3 in  [11]. O-T represents the original Transformer encoder, T-AB is the Transformer model with attention biasing explained in Remark 1, T-GSA is the real Transformer with Gaussian-weighted self-attention, and C-T-GSA is the complex Transformer model. The real transformers consisted of 10 encoder layers and the complex Transformer has 6 decoder layers. The encoder and decoder layers were described in Figure 1 and 3 and they have 1024 input and output dimensions. All the neural network models evaluated in this section were trained to minimize LSDR-PESQ.

First, O-T showed large performance degradation compared with CNN-LSTM over all SNR ranges. Second, the T-AB substantially improved SDR and PESQ performance over O-T, which suggested that the positional encoding is an important factor to improve Transformer performance on this denoising problem. However, the T-AB still suffered from the large loss compared with the recurrent model, CNN-LSTM. Finally, with the proposed Gaussian-weighting, the T-GSA model significantly outperformed all the previous networks including CNN-LSTM. Especially, the large performance gap between attention biasing and Gaussian weighting suggested that using negative correlations is as important as using positive ones.

The complex Transformer showed 0.1 to 0.2 dB SDR improvement over all the SNR ranges compared with the real Transformer. However, the PESQ performance degraded compared with the real Transformer. The reason for degradation could be overfitting due to the larger parameter size or due to the difficulty in predicting the phase spectrum. We are considering future research to make the complex network provide consistent performance gains on both the SDR and PESQ metrics.

Table 2 shows comparisons with other generative models. All the results except CNN-LSTM and T-GSA (SEGAN [13], WAVENET [15] and TF-GAN [16]) are from the original papers. CSIG, CBAK and COVL are objective measures where high value means better quality of speech [10]. CSIG is mean opinion score (MOS) of signal distortion, CBAK is MOS of background noise intrusiveness and COVL is MOS of the overall effect. SSNR is Segmental SNR defined in [14].

The proposed Transformer model outperformed all the generative models for all the perceptual speech metrics listed in Table 2 with large margin. The main improvement came from the joint SDR and PESQ optimization schemes in [11] that benefited both CNN-LSTM and T-GSA. Furthermore, T-GSA showed consistently better performance over CNN-LSTM for all the metrics, which agrees with the result at Table 1.

We proposed a Transformer architecture with Gaussian-weighted self-attention for speech enhancement. The attention weights are attenuated proportionally to the distance between the target frame and the symbols attended to, while preserving the correlation signs. The performance evaluation result showed that the proposed self-attention scheme significantly improved both the SDR and PESQ scores over previous state-of-art recurrent and transformer networks.