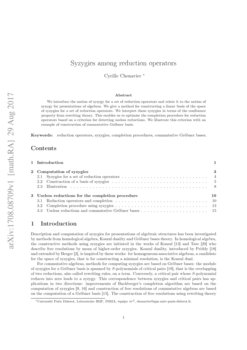 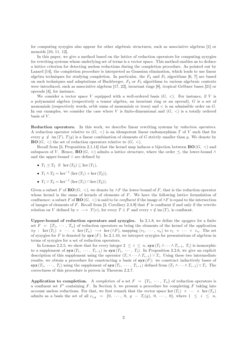 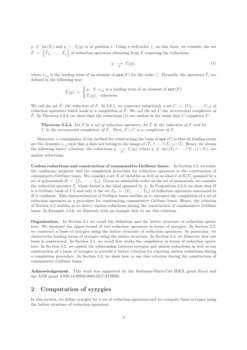 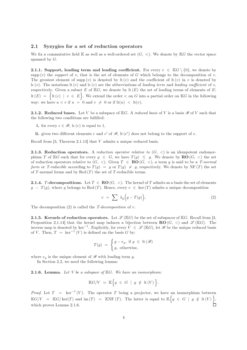 Description and computation of syzygies for presentations of algebraic structures has been investigated by methods from homological algebra, Koszul duality and Gröbner bases theory. In homological algebra, the constructive methods using syzygies are initiated in the works of Koszul [18] and Tate [25] who describe free resolutions by mean of higher-order syzygies. Koszul duality, introduced by Priddy [23] and extended by Berger [5], is inspired by these works: for homogeneous associative algebras, a candidate for the space of syzygies, that is for constructing a minimal resolution, is the Koszul dual.

For commutative algebras, methods for computing syzygies are based on Gröbner bases: the module of syzygies for a Gröbner basis is spanned by S-polynomials of critical pairs [24], that is the overlapping of two reductions, also called rewriting rules, on a term. Conversely, a critical pair whose S-polynomial reduces into zero leads to a syzygy. This correspondence between syzygies and critical pairs has applications in two directions: improvements of Buchberger’s completion algorithm are based on the computation of syzygies [14, 21] and construction of free resolutions of commutative algebras are based on the computation of a Gröbner basis [20]. The construction of free resolutions using rewriting theory for computing syzygies also appear for other algebraic structures, such as associative algebras [1, 8] or monoids [15, 16, 17].

[6] for noncommutative Gröbner bases and exploited by Berger for studying homological properties of quadratic algebras [2, 3, 4]. Using reduction operators enables us to deduce a lattice criterion for detecting useless reductions during the completion procedure. As pointed out by Lazard [19], the completion procedure is interpreted as Gaussian elimination, which leads to use linear algebra techniques for studying completion. In particular, the F4 and F5 algorithms [11, 12] are based on such techniques and adaptations of Buchberger, F4 or F5 algorithms to various algebraic contexts were introduced, such as associative algebras [22, 27], invariant rings [13], tropical Gröbner bases [26] or operads [9], for instance.

We consider a vector space V equipped with a well-ordered basis (G, <). For instance, if V

is a polynomial algebra (respectively a tensor algebra, an invariant ring or an operad),

G is a set of monomials (respectively words, orbit sums of monomials or trees) and < is an admissible order on G. In our examples, we consider the case where V is finite-dimensional and (G, <) is a totally ordered basis of V.

Recall from [7, Proposition 2.1.14] that the kernel map induces a bijection between RO(G, <) and subspaces of V. Hence, RO(G, <) admits a lattice structure, where the order ⪯, the lower-bound ∧ and the upper-bound ∨ are defined by

Given a subset F of RO(G, <), we denote by ∧F the lower-bound of F, that is the reduction operator whose kernel is the sums of kernels of elements of F. We have the following lattice formulation of confluence: a subset F of RO(G, <) is said to be confluent if the image of ∧F is equal to the intersection of images of elements of F. Recall from [7, Corollary 2.3.9] that F is confluent if and only if the rewrite relation on V defined by v ⟶ T(v), for every T∈F and every v∉im(T), is confluent.

Upper-bound of reduction operators and syzygies.

A completion of a set F = {T1, ⋯, Tn} of reduction operators is a confluent set F′ containing F. In Section 3, we present a procedure for completing F taking into account useless reductions, that is the reductions which do not change the final result of a completion procedure. This notion is formally defined in Definition 3.1.1.

where ei,g is the leading term of an element of syz(F) for the order ⊏. Formally, the operators ~Ti are defined in the following way:

Moreover, a consequence of our method for constructing the basis of syz(F) is that its leading terms are the elements ei,g such that g does not belong to the image of (T1∧⋯∧Ti−1)∨Ti. Hence, we obtain the following lattice criterion: the reductions g ⟶F Ti(g), where g ∉ im((T1∧⋯∧Ti−1)∨Ti), are useless reductions.

2.1 Syzygies for a set of reduction operators

We fix a commutative field K as well as a well-ordered set (G, <). We denote by KG the vector space spanned by G.

For every v ∈ KG∖{0}, we denote by supp(v) the support of v, that is the set of elements of G which belongs to the decomposition of v. The greatest element of supp(v) is denoted by lt(v) and the coefficient of lt(v) in v is denoted by lc(v). The notations lt(v) and lc(v) are the abbreviations of leading term and leading coefficient of v, respectively. Given a subset E of KG, we denote by lt(E) the set of leading terms of elements of E: lt(E) = {lt(v) ∣ v ∈ E}. We extend the order < on G into a partial order on KG in the following way: we have u<v if u = 0 and v ≠ 0 or if lt(u) < lt(v).

Let V be a subspace of KG. A reduced basis of V is a basis B of V such that the following two conditions are fulfilled:

where eg is the unique element of B with leading term g.

In Section 2.2, we need the following lemma:

Let V be a subspace of KG. We have an isomorphism:

We deduce from the bijection induced by the kernel map that RO(G, <) admits a lattice structure, where the order ⪯, the lower-bound ∧ and the upper-bound ∨ are defined by

In Section 2.2, we construct a basis of syz(F). This construction requires to relate syzygies to the upper-bound of reduction operators. This link is given by the following proposition:

Let P = {T1, T2} be a pair of reduction operators. We have an isomorphism:

2.2 Construction of a basis of syzygies

Throughout the section, we fix a set F = {T1, ⋯, Tn} of reduction operators.

By definition of syzygies, we have an isomorphism of vector spaces ker(F)/syz(F) ≃ ker(∧F). From Lemma 2.1.2, ker(∧F) admits as a basis the set

where lt(syz(F)) is the set of leading terms of elements of syz(F) for the order ⊏. Hence, every v ∈ ker(∧F) admits a unique decomposition

where, for every index (i,g) in the sum, g belongs to Red(Ti). The decomposition (6) in called the canonical decomposition of v with respect to F.

Procedure for constructing a basis of syz(F).

For every integer i such that 2 ≤ i ≤ n, we consider the reduction operator

be these two decompositions. We let:

With the previous notations, Bn is a basis of syz(F).

The proof of Theorem 2.2.2 is done at the end of the section. This is a consequence of Proposition 2.2.4, which we prove using intermediate results of Lemma 2.2.3. For that, we need to fix some notations.

Moreover, we abuse notations in the following ways:

be the canonical decomposition of vi,g0 with respect to {T1, ⋯, Ti}. Every index j of the sum (11) is strictly smaller than i, so that we have

Let i be an integer such that 2≤ i ≤ n. We have the following direct sum decomposition:

We deduce the following lattice description of the set of leading terms of syzygies:

In this section we illustrate the construction of Bn with an example. For that, we use the implementation of the lattice structure of reduction operators available online222https://pastebin.com/Ds5haArH.

The vector space ker(F) is spanned by the following eight vectors: