Syntactic structure of a sentence text is correlated with the prosodic structure of the speech that is crucial for improving the prosody and naturalness of a text-to-speech (TTS) system. Nowadays TTS systems usually try to incorporate syntactic structure information with manually designed features based on expert knowledge. In this paper, we propose a syntactic representation learning method based on syntactic parse tree traversal to automatically utilize the syntactic structure information. Two constituent label sequences are linearized through left-first and right-first traversals from constituent parse tree. Syntactic representations are then extracted at word level from each constituent label sequence by a corresponding uni-directional gated recurrent unit (GRU) network. Meanwhile, nuclear-norm maximization loss is introduced to enhance the discriminability and diversity of the embeddings of constituent labels. Upsampled syntactic representations and phoneme embeddings are concatenated to serve as the encoder input of Tacotron2. Experimental results demonstrate the effectiveness of our proposed approach, with mean opinion score (MOS) increasing from 3.70 to 3.82 and ABX preference exceeding by 17 syntactic parse trees, prosodic differences can be clearly perceived from the synthesized speeches. 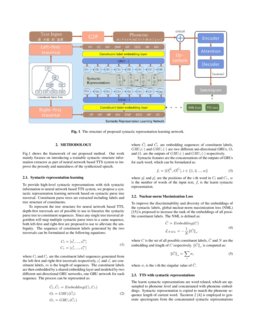 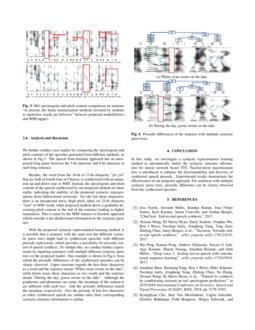 Recently neural network based text-to-speech (TTS) systems have achieved certain success in prosody and naturalness of synthesized speech over conventional methods [1, 2, 3, 4]. By applying encoder-decoder framework with attention [5], these systems can directly predict speech parameters from graphemes or phonemes by learning acoustic and prosodic patterns via a flexible mapping from linguistic to acoustic space. However, the learnt prosodic patterns only contain part of prosodic structural information [4], resulting in poor prosody and naturalness performance even improper prosody.

. A set of rule-based syntactic features such as part-of-speech (POS) and positions of the current word in parent phrases are proposed and used in hidden Markov model (HMM) based acoustic model

To maker better use of the syntactic information, motivated by the syntactic parse tree traversal approach in neural machine translation

Experimental results show that our proposed model outperforms the baseline in terms of prosody and naturalness. Mean opinion score (MOS) increases from 3.70 to 3.82

Fig.1 shows the framework of our proposed method. Our work mainly focuses on introducing a trainable syntactic structure information extractor as part of neural network based TTS system to improve the prosody and naturalness of the synthesized speech.

To represent the tree structure for neural network based TTS, depth-first traversals are of possible to use to linearize the syntactic parse tree to constituent sequences. Since any single tree traversal algorithm will map multiple syntactic parse trees to a same sequence, both left-first and right-first are proposed to use to alleviate the ambiguity. The sequence of constituent labels generated by the two traversals can be formulated as the following equations:

Syntactic features are the concatenations of the outputs of GRUs for each word, which can be formulated as:

where pil and pir are the positions of the i-th word in Cl and Cr, w is the number of words of the input text, fi is the learnt syntactic representation.

where C is the set of all possible constituent labels, ^C and N are the embedding and length of C respectively. ∥^C∥∗ is computed as:

where σi is the i

-th the singular value of

is further utilized to reconstruct the waveform. The whole model is trained with a loss function which can be formulated as:

We train models on public Chinese female corpus [16], which includes 10-hour professional speech and 10000 sentences. 500 sentences are used for validation and other sentences are used for training. We down-sample the speech to 16k Hz sampling frequency, The tacotron 2 part in our model is trained with vanilla setups except setting frequency to match our speech. The learning rate is fixed to 10−3 and the loss weight of NML is 0.05.

We train the WRF based TTS [12] as baseline approach. The parser used in WRF [17] is replaced by state-of-the-art syntactic parsing model Benepar [18].

We randomly select 30 sentences from Internet as test set, 5 of which are sentences with multiple different syntactic parse trees. Synthesized speeches are shifted in random order and rated by 20 native speakers on a scale from 1 to 5, from which a subjective mean opinion score (MOS) is calculated.

, with a comparable variance. T-test reveals that our proposed approach significantly outperforms the baseline with a

We also conduct a ABX preference test between pairs of systems on the synthesized speech. The listeners are presented with the speeches synthesized by the baseline and proposed approaches in random order, and decide which one has the better prosody and naturalness. As show in Table.2, the proposed approach receives 45.8% preference rate exceeding the baseline approach by 17%.

We visualize the learnt embeddings of constituent labels with and without NML by principal components analysis (PCA). As show in Fig.

2, embeddings with NML are more scattered than the embeddings without NML, which demostrates the effectiveness of NML in improving discriminability and diversity.

We further conduct case studies by comparing the spectrogram and pitch contours of the speeches generated from different methods, as shown in Fig.3. The speech from baseline approach has an unexpected long pause between the 5-th character and 6-th character in such long sentence.

Besides, the word from the 16-th to 17-th character, “ji4 yi4” that are both of fourth tone in Chinese, is synthesized with an unnatural up-and-down tone in WRF. Instead, the spectrogram and pitch contour of the speech synthesized by our proposed method are more stable, indicating the stability of the proposed syntactic representations from bidirectional traversals. For the last three characters, there is an unexpected stress (high pitch value) on 23-th character “xia4” in WRF result, while proposed method shows a gradually decreasing pitch contour at the end of the sentence leading to higher naturalness. This is cause by the WRF features in baseline approach which consider a uni diridectional information in the syntactic parse tree.

With the proposed syntactic representation learning method, it is possible that a sentence with the same text but different syntactic parse trees might lead to synthesized speeches with different prosody expressions, which provides a possibility for prosody control of speech synthesis. To validate this, we conduct further experiments by inputting sentences with multiple different syntactic parse trees to the proposed model. One example is shown in Fig.4, from which the prosodic differences of the synthesized speeches can be clearly observed. Upper structure regards the first three characters as a word and the sentence means “White swan swims on the lake”, while below treats these characters as two words and the sentence means “During the day, goose swims on the lake”. Although the graphemes and phonemes are same, the meanings of the sentences are different with each tree. And the prosodic differences match the meanings respectively. Also the prosody of last five characters in either synthesized speech are similar since their corresponding syntactic structure information is similar.

In this study, we investigate a syntactic representation learning method to automatically utilize the syntactic structure information for neural network based TTS. Nuclear-norm maximization loss is introduced to enhance the discriminability and diversity of synthsized speech prosody. Experimental results demonstrate the effectiveness of our proposed approach. For sentences with multiple syntactic parse trees, prosodic difference can be clearly observed from the synthesized speeches.