This article explores some geometric and algebraic properties of the dynamical system which is represented by matrix differential equations arising from inertial navigation problems, such as the symplecticity and the orthogonality. Furthermore, it extends the applicable fields of symplectic geometric algorithms from the even dimensional Hamiltonian system to the odd dimensional dynamical system. Finally, some numerical experiments are presented and illustrate the theoretical results of this paper. 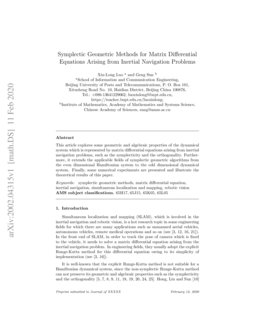 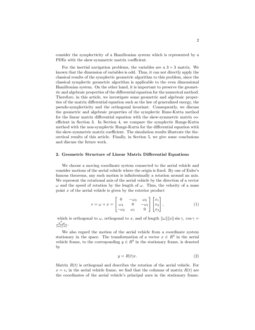 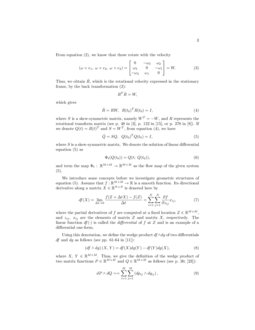 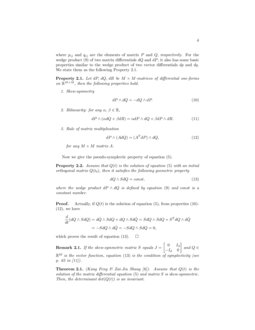 In this paper we consider the spatial semi-discretization of conservativ...
Michele Benzi, et al. ∙

This paper is concerned with the derivation and properties of differenti...
Douglas N. Arnold, et al. ∙

Local and global canonical forms for differential-algebraic equations with symmetries

Simultaneous localization and mapping (SLAM), which is involved in the inertial navigation and robotic vision, is a hot research topic in some engineering fields for which there are many applications such as unmanned aerial vehicles, autonomous vehicles, remote medical operations and so on (see Corke2016 ; LM2013 ; QLS2018 ; SMP2017 ). In the front end of SLAM, in order to track the pose of camera which is fixed to the vehicle, it needs to solve a matrix differential equation arising from the inertial navigation problem. In engineering fields, they usually adopt the explicit Runge-Kutta method for this differential equation owing to its simplicity of implementation (see Corke2016 ; QLS2018 ).

consider the symplecticity of a Hamiltonian system which is represented by a PDEs with the skew-symmetric matrix coefficient.

For the inertial navigation problems, the variables are a 3×3 matrix. We known that the dimension of variables is odd. Thus, it can not directly apply the classical results of the symplectic geometric algorithm to this problem, since the classical symplectic geometric algorithm is applicable to the even dimensional Hamiltonian system. On the other hand, it is important to preserve the geometric and algebraic properties of the differential equation for the numerical method. Therefore, in this article, we investigate some geometric and algebraic properties of the matrix differential equation such as the law of generalized energy, the pseudo-symplecticity and the orthogonal invariant. Consequently, we discuss the geometric and algebraic properties of the symplectic Rune-Kutta method for the linear matrix differential equation with the skew-symmetric matrix coefficient in Section 3. In Section 4, we compare the symplectic Runge-Kutta method with the non-symplectic Runge-Kutta for the differential equation with the skew-symmetric matrix coefficient. The simulation results illustrate the theoretical results of this article. Finally, in Section 5, we give some conclusions and discuss the future work.

ω and the speed of rotation by the length of ω. Thus, the velocity of a mass point x of the aerial vehicle is given by the exterior product

Thus, we obtain ˙R, which is the rotational velocity expressed in the stationary frame, by the back transformation (2):

where S is a skew-symmetric matrix. We denote the solution of linear differential equation (5) as

and term the map Φt:RM×M→RM×M as the flow map of the given system (5).

We introduce some concepts before we investigate geometric structures of equation (5). Assume that f:RM×M→R is a smooth function. Its directional derivative along a matrix X∈RN×N is denoted here by

where the partial derivatives of f are computed at a fixed location Z∈RM×M, and zij,xij are the elements of matrix Z and matrix X, respectively. The linear function df(⋅) is called the differential of f at Z and is an example of a differential one-form.

Using this denotation, we define the wedge product df∧dg of two differentials df and dg as follows (see pp. 61-64 in LR2004 ):

Now we give the pseudo-symplectic property of equation (5).

Assume that Q(t) is the solution of equation (5

) with an initial orthogonal matrix

Q(t0), then it satisfies the following geometric property

where the wedge product dP∧dQ is defined by equation (9) and const is a constant number.

which proves the result of equation (13). □

(Kang Feng & Zai-Jiu Shang FS1995 ). Assume that Q(t) is the solution of the matrix differential equation (5) and matrix S is skew-symmetric. Then, the determinant det(Q(t)) is an invariant.

Proof.  We denote g(t)=det(Q(t)), then it only needs to prove ddtg(t)=0 along the solution curve of the matrix differential equation (5). Actually, from equation (5), we have

represents the eigenvalue of matrix

S. Here, we use the property

Since matrix S is skew-symmetric, we have trace(S)=0. Replacing this result into equation (14), we have

which gives the proof of the result. □

The generalized energy of the dynamical system (5) conserves constant.

Proof.  From the definition of the generalized energy (15), we have

Since Q(t) satisfies the dynamical equation (5), replacing ˙Q(t) with SQ(t) in equation (16), we obtain

Noticing the trace property trace(A)=trace(AT) and from equation (17), we have

where we use the assumption ST=−S in the above third equality of equation (18). Thus, we prove that the generalized energy of the dynamical system (5) conserves constant. □

Another interesting property is about the inverse proposition of property 2.3. We state this property as the following Property 2.4.

Assume that the generalized energy trace(Q(t)TQ(t)) of the dynamical system (5) conserves constant, then matrix S is skew-symmetric.

Proof.  Since the generalized energy trace(Q(t)TQ(t)) along the solution of equation (5) conserves constant, from equations (16)-(17) and equation (5), we have

which gives the proof of the result. □

where Δt is a time-stepping length and bi,aij(i,j=1,2,…,s) are constants. For a Runge-Kutta method, we can write a condensed representation , which is so-called Butcher-array as Table 1 (see Butcher2003 ).

Assume that Qk+1 is the solution of equations (20)-(21), when the coefficients of a Runge-Kutta method satisfy the symplectic condition (22), then we have

Thus, from equation (27), we know that the result of equation (23) is true if the coefficients of a Runge-Kutta method satisfy equation (22). □

which also gives the conservation of the discrete generalized energy trace(QTkQk).

According to equation (20), we obtain

which gives the proof of the result of equation (28) and also gives trace(QTk+1Qk+1)=trace(QTkQk). □

If we apply the implicit midpoint method to the linear matrix differential equation (5), we have

Therefore, from equation (32), we obtain

Namely the numerical solutions of the implicit midpoint method preserve the orthogonal invariant.

and the implicit Euler transform

That is to say

According to the definition of the symmetric operator, it is not difficult to see that the Cayley transform (33) is symmetric.

When we apply the explicit second order Runge-Kutta method to the linear matrix differential equation (5), we obtain the following iteration formula

The test problem is given as

The numerical results of the test problem are presented by Figure 1. The horizontal axis is on time and the vertical axis represents the error of the discrete energy. From Figure 1, we find that the generalized energy of the symplectic implicit midpoint method (32) fluctuates tiny, and the generalized energy of the non-symplectic explicit Runge-Kutta method grows with time. It means that the numerical results conform to the theoretical results of the previous sections.

We mainly extend the applicable fields of symplectic geometric algorithms from the even dimensional Hamiltonian system to the odd dimensional dynamical system, and discuss the geometric and algebraic properties of symplectic Runge-Kutta methods for the linear matrix differential equation, such as the symplecticity and the orthogonality. It is worth noting that the implicit midpoint rule preserves the Lie group structure of orthogonal matrices (see for example p. 118 in HLW2006 ) and this is the interested research topic. Another interesting issue is how to preserve the invariant of QTkQk when we use the approximate technique in LW2011 if the initial matrix Q0 is not orthogonal. We would like to consider those issues in our future work.