In this paper, we present new results on the Riemannian geometry of symmetric positive semi-definite (SPSD) matrices. First, based on an existing approximation of the geodesic path, we introduce approximations of the logarithmic and exponential maps. Second, we present a closed-form expression for Parallel Transport (PT). Third, we derive a canonical representation for a set of SPSD matrices. Based on these results, we propose an algorithm for Domain Adaptation (DA) and demonstrate its performance in two applications: fusion of hyper-spectral images and motion identification. 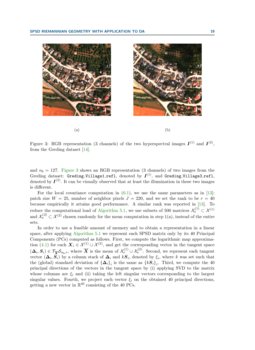 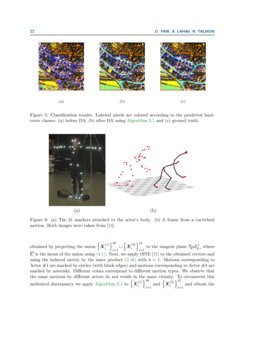 Recent technological advances give rise to the collection and storage of massive complex datasets. These datasets are often high dimensional and multimodal, calling for the development of informative representations. Since such complex data typically do not live in a Euclidean space, standard linear analysis techniques applied directly to the data are inappropriate. Consequently, analysis techniques based on Riemannian geometry have attracted significant research attention. While the basic mathematical operations used for data analysis, e.g., addition, subtraction, and comparison, are straight-forward in the Euclidean space, they are often non-trivial or intractable in particular Riemannian spaces.

A considerable amount of literature has been published on the Riemannian geometry of Symmetric Positive Definite (SPD) matrices, where it was shown to be useful for various applications, e.g., in computer vision, medical data analysis, and machine learning

[moakher2005differential] of SPD matrices for brain computer interface (BCI). The PT on the SPD manifold, which has a closed-form expression, was used in [yair2019parallel] for DA. Similar geometric operations in other Riemannian spaces have been developed as well, e.g., on the Grassmann manifold [absil2004riemannian] and on the Stiefel manifold [edelman1998geometry], and were shown to be beneficial for a wide variety of data analysis tasks, e.g. [shrivastava2014unsupervised].

In this paper, we consider the Riemannian geometry of symmetric positive semi-definite (SPSD) matrices. Formally, let S+d,r denote the set of d×d SPSD matrices with a fixed rank r<d

. Based on the eigenvalue decomposition, it can be shown that any SPSD matrix

C∈S+d,r can be represented by:

is an SPD matrix. This geometry extends the Riemannian geometry of SPD matrices. In addition, it facilitates the analysis of a larger pool of data features. For example, the SPD geometry supports the analysis of only full-rank covariance matrices. However, it is well known that in many real-world problems, this is not the case. Often, high-dimensional data such as gene expression data

[kapur2016gene] and hyper-spectral imaging data [HyperspectralLowRank, niu2016hyperspectral] have an intrinsic low-rank structure, and therefore, the associated covariance matrices are not full-rank. In addition to supporting low-rank covariance matrices, in contrast to the SPD geometry, the SPSD geometry applies to a wide variety of kernels, graph Laplacians, and similarity matrices, which are common data features in contemporary data analysis.

Despite the high relevance to many data analysis techniques, the usage of the Riemannian geometry of SPSD matrices has thus far been limited, since it lacks several pivotal components. First, there is no available explicit expression for the geodesic path in S+d,r connecting two SPSD matrices. As a consequence, there is no definitive expression for the Riemannian distance between two SPSD matrices, which is typically defined as the arc length of the geodesic path. In addition, basic operations such as the logarithmic and the exponential maps, which are derived from the geodesic path, are undefined. Second, the representation of C∈S+d,r by a pair (G,P) is not unique, posing challenges when jointly analyzing multiple SPSD matrices. These missing components led to an avenue of research, where full-rank structure is imposed by adding a scalar matrix to each of the given low-rank matrices [wang2012covariance, fang2018new]. Essentially, this approach “artificially” transforms the SPSD geometry into the SPD geometry by introducing a component that does not stem from the data.

Based on the developed mathematical infrastructure for the analysis of SPSD matrices with a fixed rank, we address the problem of DA. Often, due to the inherent heterogeneity of many types of datasets, useful representations usually cannot be achieved simply by considering the union of multiple datasets. We present an algorithm for DA, which is based on the PT on S+d,r

and facilitates an informative representation of multiple heterogeneous datasets. We showcase the performance of our algorithm in two applications. First, we demonstrate fusion of hyper-spectral images collected by airborne sensors, which allows high-quality categorization of land-covers in one image by training a classifier on another image. Second, we show accurate motion identification based on recordings of motions, which is actor-independent, i.e., independent of the actor executing these motions.

The remainder of the paper is organized as follows. In Section 2 we present preliminaries on the Riemannian manifolds which are relevant to our work: the manifold of SPD matrices Pd, the Grassman manifold Gd,r and the manifold of SPSD matrices with a fixed rank S+d,r. In Section 3, we describe a particular transportation map on Pd and Gd,r that is derived from PT. Section 4 presents our approximations for the logarithmic and exponential maps on S+d,r, the PT-driven transportation map on S+d,r, and a canonical representation for a set of SPSD matrices. Next, we propose a new DA algorithm in Section 5. Section 6 consists of two applications of the proposed DA algorithm to real data. Finally, Section 7 concludes the paper.

In this section, we briefly describe several known properties of the manifold of SPD matrices Pd, the Grassman manifold Gd,r, and the manifold of SPSD matrices S+d,r, which will be extensively used throughout the paper. First, we formally denote the following sets:

In addition, given a manifold M with its Riemannian geodesic distance dR, we denote the Fréchet (Karcher) mean ¯¯¯x of the set {xi∈M}i by:

2.1 The manifold of SPD matrices Pd

The matrix P∈Rd×d is an SPD matrix if it is symmetric and all of its eigenvalues are strictly positive. Denote the set of all d×d SPD matrices by:

The set Pd can be embedded in a 12d(d+1) dimensional space, that is:

The tangent space TPPd at any point P∈Pd is the set of all symmetric matrices:

The affine invariant metric (inner product) in the tangent space TPPd is given by:

The set Pd equipped with the affine invariant metric Eq. 1 gives rise to a Riemannian manifold. Below, we outline the main properties of this manifold. For more details, we refer the readers to [bhatia2009positive].

For convenience, when considering only the r leftmost columns of Q∈Od we sometimes use G∈Vd,r (and similarly [G]) instead of Q (and [Q]), and we will state the dimensions explicitly when necessary. This “thin representation”, using G instead of Q, gives rise to economic implementations of most of the operations detailed below.

Let Gd,r={[Q]} be the set of all r-dimensional subspaces of Rd, where [Q] represents any unique r-dimensional span as in Eq. 5. It can also be viewed as the quotient space

Following [edelman1998geometry], for computational purposes, we usually consider a single matrix, either G∈Vd,r or Q∈Od, to represent the entire equivalence class [Q]. Throughout the paper, when considering multiple points (subspaces) on the Grassman manifold, we assume that the principal angels between those subspaces are strictly smaller than π2.

The set Gd,r can be embedded in a r(d−r) dimensional space, that is:

, represented by the orthogonal matrix

where Bskew=[0−BTB0] for any B∈R(d−r)×r. For simplicity, the tangent space TQGd,r can be equivalently written as

where , G∈Vd,r, and G⊥∈Vd,d−r is the orthogonal complement of G. The inner product in TQGd,r is given by:

The set Gd,r and the inner product Eq. 7 form the Grassman manifold. Below, we outline its main properties. For more details, we refer the readers to [edelman1998geometry].

Given a set of matrices {Qi∈Od}i, where each represents a point [Qi]∈Gd,r, Algorithm 2 can be used to obtain the Riemannian mean on the Grassman manifold ¯¯¯¯¯Q=M({Qi}).

Let Q1∈Od and Q2∈Od represent two points on Gd,r, and let G1∈Vd,r and G2∈Vd,r be their r leftmost columns, respectively. When considering the Stiefel manifold Vd,r=Od/Od−r, the closest point ˜Q2 in [Q2] to Q1 is given by:

where GT1G2=O1ΣOT2 is an SVD decomposition. This result will be heavily used in remainder of the paper.

Since any C∈S+d,r can be represented by:

We note that this representation is not unique since

for any O∈Or. In other words, the set S+d,r can be written as the quotient manifold

Using the structure space, the set S+d,r can be embedded in rd−12r(r−1) dimensional space, that is:

The tangent space T(G,P)S+d,r in the structure space is given by:

The inner product in the tangent space T(G,P)S+d,r is given by:

There is no definitive expression for the geodesic path between two points on the manifold. Bonnabel and Sepulchre [bonnabel2010riemannian] proposed the following approximation in the structure space. Let C1≅(G1,P1) and C2≅(G2,P2) be two points on S+d,r such that G2\coloneqqΠG1(G2). Then, the approximate geodesic path between C1 and C2 is given by:

We note that this is not a distance on S+d,r, since it does not satisfy the triangle inequality. For more details on the SPSD manifold, we refer the readers to [bonnabel2010riemannian].

, an algorithm to compute a point which admits the desirable property of the geometric mean was proposed in

[bonnabel2013rank]. The algorithm is summarized in Algorithm 3.

3 Transportation on a Riemannian manifold

In this section, we study a transport map of a set of points with respect to two reference points on a Riemannian manifold. This transportation gives the foundation to the proposed DA, as we will show in the sequel. We begin with a general definition.

We call a transport map φ¯¯¯x→¯y:M→M an isometric transport of X from ¯¯¯x to ¯¯¯y, if it satisfies the following two properties.

By the above definition, given such a transport map φ¯¯¯x→¯y, any composition of “rotation” about ¯¯¯y (in the Riemannian sense) applied to φ¯¯¯x→¯y(X) also satisfied Definition 1.

In order to resolve this degree of freedom, we focus on transport maps defined as follows. Let

The extra degree of freedom associated with Definition 1 is resolved by considering the map Γ+¯¯¯x→¯y, because the parallel transports Γ¯¯¯x→¯y we consider on the specific manifolds of interest are with respect to the Levi-Civita connection. The Levi-Civita connection is the unique torsion-free metric connection. As a result, such parallel transports along a curve are torsion-free, i.e., they preserve the inner products on the various tangent spaces, circumventing the “screw around the curve”.

In the following, we will show that the specifications of Γ+¯¯¯x→¯y to the manifolds Pd and Gd,r satisfy Definition 1. In addition, we will provide compact and closed-form expressions for these transports.

where the latter transition is because dPd is affine invariant. Second, the mean of the transported set coincides with the target mean, that is

where in (∗) we use the congruence invariance property of geometric mean (see [bhatia2009positive]), and in (∗∗) we plug Eq. 20.

Suppose that ¯¯¯¯¯R is the Riemannian mean of another set Y={Ri∈Pd}Nxi=1. In addition to satisfying Definition 1, the transported set {Γ+¯¯¯¯P→¯¯¯¯R(Pi)|Pi∈X}Nxi=1 coincides with Y under the conditions specified in the following statement.

Let {Pi}i be a set of points on Pd with the Riemannian mean ¯¯¯¯¯P. Consider the map t:Pd→Pd defined by

where T∈GLd. Let ¯¯¯¯¯R be the Riemannian mean of the resulting set {Ri}i. The following holds

See the proof in the Supplementary Material (SM).