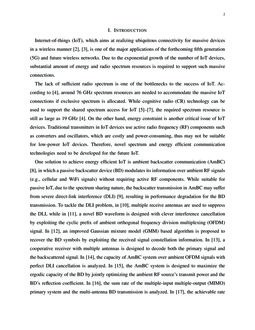 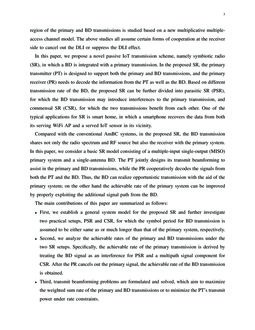 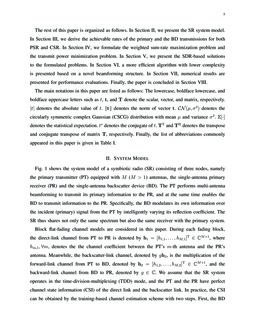 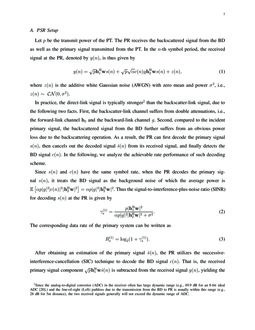 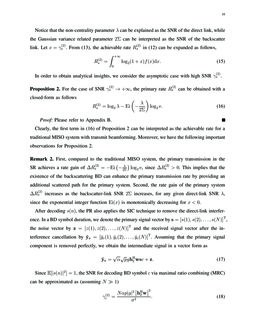 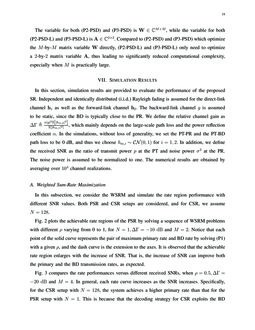 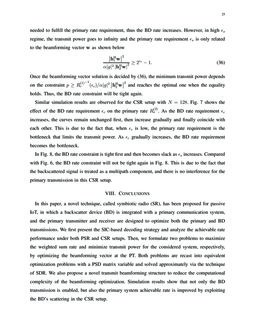 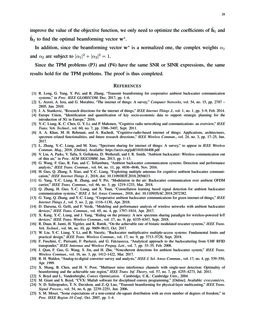 Internet-of-things (IoT), which aims at realizing ubiquitous connectivity for massive devices in a wireless manner [Atzori2010Internet, stankovic2014research], is one of the major applications of the forthcoming fifth generation (5G) and future wireless networks. Due to the exponential growth of the number of IoT devices, substantial amount of energy and radio spectrum resources is required to support such massive connections.

The lack of sufficient radio spectrum is one of the bottlenecks to the success of IoT. According to [UniEurope2016Identification], around 76 GHz spectrum resources are needed to accommodate the massive IoT connections if exclusive spectrum is allocated. While cognitive radio (CR) technology can be used to support the shared spectrum access for IoT [Liang2011Cognitive, Khan2017Cognitive, Zhang2018Spectrum], the required spectrum resource is still as large as 19 GHz [UniEurope2016Identification]. On the other hand, energy constraint is another critical issue of IoT devices. Traditional transmitters in IoT devices use active radio frequency (RF) components such as converters and oscillators, which are costly and power-consuming, thus may not be suitable for low-power IoT devices. Therefore, novel spectrum and energy efficient communication technologies need to be developed for the future IoT.

One solution to achieve energy efficient IoT is ambient backscatter communication (AmBC) [Liu2013], in which a passive backscatter device (BD) modulates its information over ambient RF signals (e.g., cellular and WiFi signals) without requiring active RF components. While suitable for passive IoT, due to the spectrum sharing nature, the backscatter transmission in AmBC may suffer from severe direct-link interference (DLI) [Wang2016Ambient], resulting in performance degradation for the BD transmission. To tackle the DLI problem, in [Guo2018Exploiting], multiple receive antennas are used to suppress the DLI, while in [Yang2017-p-], a novel BD waveform is designed with clever interference cancellation by exploiting the cyclic prefix of ambient orthogonal frequency division multiplexing (OFDM) signal. In [Zhang2018Constellation]

, an improved Gaussian mixture model (GMM) based algorithm is proposed to recover the BD symbols by exploiting the received signal constellation information. In

[Yang-2017-p1-6], a cooperative receiver with multiple antennas is designed to decode both the primary signal and the backscattered signal. In [Darsena-2017-p1-1], the capacity of AmBC system over ambient OFDM signals with perfect DLI cancellation is analyzed. In [Kang-2017-p1-6], the AmBC system is designed to maximize the ergodic capacity of the BD by jointly optimizing the ambient RF source’s transmit power and the BD’s reflection coefficient. In [Duan2017Achievable], the sum rate of the multiple-input multiple-output (MIMO) primary system and the multi-antenna BD transmission is analyzed. In [Liu2018Backscatter], the achievable rate region of the primary and BD transmissions is studied based on a new multiplicative multiple-access channel model. The above studies all assume certain forms of cooperation at the receiver side to cancel out the DLI or suppress the DLI effect.

The main contributions of this paper are summarized as follows:

The main notations in this paper are listed as follows: The lowercase, boldface lowercase, and boldface uppercase letters such as t, t, and T denote the scalar, vector, and matrix, respectively. |t| denotes the absolute value of t. ∥t∥ denotes the norm of vector t. CN(μ,σ2) denotes the circularly symmetric complex Gaussian (CSCG) distribution with mean μ

σ2. E[⋅] denotes the statistical expectation. t∗ denotes the conjugate of t. TT and TH denotes the transpose and conjugate transpose of matrix T, respectively. Finally, the list of abbreviations commonly appeared in this paper is given in Table I.

Fig. 1 shows the system model of a symbiotic radio (SR) consisting of three nodes, namely the primary transmitter (PT) equipped with M (M>1) antennas, the single-antenna primary receiver (PR) and the single-antenna backscatter device (BD). The PT performs multi-antenna beamforming to transmit its primary information to the PR, and at the same time enables the BD to transmit information to the PR. Specifically, the BD modulates its own information over the incident (primary) signal from the PT by intelligently varying its reflection coefficient. The SR thus shares not only the same spectrum but also the same receiver with the primary system.

. We assume that the SR system operates in the time-division-multiplexing (TDD) mode, and the PT and the PR have perfect channel state information (CSI) of the direct link and the backscatter link. In practice, the CSI can be obtained by the training-based channel estimation scheme with two steps. First, the BD switches its impedance into the matched state, and the PT estimates the direct-link channel

In this section, we analyze the achievable rate performance of the proposed SR. Let s(n) be the signal transmitted by the PT with symbol period Ts, and s(n) is assumed to follow the standard CSCG distribution, i.e., s(n)∼CN(0,1). Denote the beamforming vector of the PT by w∈CM×1. Let c(n) be the BD signal to be transmitted, with symbol period Tc. The c(n) varies with different reflection coefficients and is assumed to be distributed111We assume that the Gaussian codewords herein to derive the maximum achievable rate of the SR. as CN(0,1). The backscattered signal from the BD is thus √αc(n), where the power reflection coefficient α∈[0,1] controls the power of the backscattered signal by the BD. It is noticed that there is no additive noise in the BD, since its integrated circuit only includes passive components [Fuschini-2008-p33-35, Qian2017Noncoherent].

In the following, we consider two setups based on different relationships between Ts and Tc. One is PSR for which Ts=Tc, and the other is CSR, for which Tc=NTs, where N is an integer and N≫1.

Let p be the transmit power of the PT. The PR receives the backscattered signal from the BD as well as the primary signal transmitted from the PT. In the n-th symbol period, the received signal at the PR, denoted by y(n), is thus given by

In practice, the direct-link signal is typically stronger222Since the analog-to-digital convertor (ADC) in the receiver often has large dynamic range (e.g., 49.9 dB for an 8-bit ideal ADC[Walden-1999-p539-550].) and the line-of-sight (LoS) pathloss due to the transmission from the BD to PR is usually within this range (e.g., 28 dB for 5m distance), the two received signals generally will not exceed the dynamic range of ADC. than the backscatter-link signal, due to the following two facts. First, the backscatter-link channel suffers from double attenuations, i.e., the forward-link channel h2 and the backward-link channel g. Second, compared to the incident primary signal, the backscattered signal from the BD further suffers from an obvious power loss due to the backscattering operation. As a result, the PR can first decode the primary signal s(n), then cancels out the decoded signal ^s(n) from its received signal, and finally detects the BD signal c(n). In the following, we analyze the achievable rate performance of such decoding scheme.

Since s(n) and c(n) have the same symbol rate, when the PR decodes the primary signal s(n), it treats the BD signal as the background noise of which the average power is E[αp|g|2|c(n)|2|hH2w|2]=αp|g|2|hH2w|2. Thus the signal-to-interference-plus-noise ratio (SINR) for decoding s(n) at the PR is given by

After obtaining an estimation of the primary signal ^s(n), the PR utilizes the successive-interference-cancellation (SIC) technique to decode the BD signal c(n). That is, the received primary signal component √phH1w^s(n) is subtracted from the received signal y(n), yielding the following intermediate signal

Assuming that the primary signal is removed perfectly, we have

Given the primary signal s(n), the signal-to-noise ratio (SNR) for decoding the BD signal is written as

follows an exponential distribution, and its probability density function (PDF) is

where β=αp|g|2∣∣hH2w∣∣2σ2 is the average received SNR of the backscatter link, and Ei(x)≜∫x−∞1ueudu is defined for the exponential integral.

The −e1xEi(−1x) is a monotonically increasing and concave function of x, for x≥0. This can be easily verified by its first and second derivatives.

In this subsection, we thus consider the CSR setup in which Tc=NTs, where N is an integer, and N≫1. Compared with the PSR setup, the BD transmission in CSR has much low rate than the primary transmission, thus it can provide an additional signal component by its scattering.

The second signal term in (9) can be viewed as the output of the primary signal s(n) passing through a slowly varying channel √αcgh2. Thus the PR first decodes the primary signal s(n) by treating the BD signal as a multipath component. The equivalent channel for decoding s(n) is denoted by heq=h1+√αcgh2. Since the PR has no prior knowledge about the BD signal c, a training symbol from the PT is required to estimate the equivalent channel heq. Given c, the SNR for decoding s(n) is written as

With a given c, the achievable rate of the direct link is thus given by

where we have ignored the training overhead in each BD symbol period due to large N.

Thus, for sufficiently large N, the average primary rate is

where the expectation is taken over the random variable