Inspired by dynamic programming, we propose Stochastic Virtual Gradient Descent (SVGD) algorithm where the Virtual Gradient is defined by computational graph and automatic differentiation. The method is computationally efficient and has little memory requirements. We also analyze the theoretical convergence properties and implementation of the algorithm. Experimental results on multiple datasets and network models show that SVGD has advantages over other stochastic optimization methods. 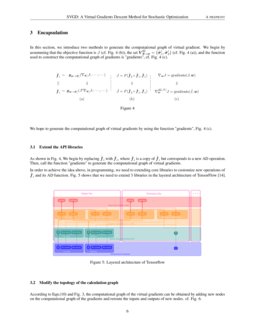 Stochastic gradient-based optimization is most widely used in many fields of science and engineering. In recent years, many scholars have compared SGD[1] with some adaptive learning rate optimization methods[2, 3]. [4] shows that adaptive methods often display faster initial progress on the training set, but their performance quickly plateaus on the development/test set. Therefore, many excellent models [5, 6, 7] still use SGD for training. However, SGD is greedy for the objective function with many multi-scale local convex regions (cf. Figure 1 of [8] or Fig. 1, left) because the negative of the gradient may not point to the minimum point on coarse-scale. Thus, the learning rate of SGD is difficult to set and significantly affects model performance[9].

Unlike greedy methods, dynamic programming (DP) [10] converges faster by solving simple sub-problems that decomposed from the original problem. Inspired by this, we propose the virtual gradient to construct a stochastic optimization method that combines the advantages of SGD and adaptive learning rate methods.

Consider a general objective function with the following composite form:

where θ∈Ωθ=Rn,Ωσ=f(Ωθ)⊆Rm, functions F and each component function of f is first-order differentiable.

In addition, when we minimize F(σ) and F(f(θ)) with the same iterative method, the former should converge faster because the structure of F is simpler than F∘f. Based on these facts, we construct sequences {σ(t)} and {θ(t)} that converge to σ∗ and θ∗, respectively, with equations:

Fig. 1 (right) shows the relationship between {σ(t)} and {θ(t)}. The sequence {σ(t)} can be obtained by using first-order iterative methods (see Sec.5 for details):

where α is the learning rate, T∗ is an operator of mappping Rm→Rm.

The difficulty in constructing operator T∗ is how to make the condition (3) holds true. Let M=(∂fi(θ)∂θj∣∣θ=θ(t))m×n, T is an operator of mapping Rm→Rm, we give the following iterations:

Since MTT∇σJ in Eqn.(6) is equivalent to the position of ∇θJ in gradient descent method, we define MTT∇σJ as the virtual gradient of function J for variable θ.

In this case, the condition (3) holds, approximately.

According to the analysis above, the sequence {F(f(θ(t)))} yields similar convergence as {F(σ(t))} in Eqn.(6) and Eqn.(5), but faster than minimizing the function F(f(θ)) with the same first-order method, directly.

) and this form is generally not unique, it is inconvenient for our algorithm design. We begin by introducing the computational graph. It is a directed graph, where each node indicates a variable that may be a scalar, vector, matrix, tensor, or even a variable of another type, and each edge unique corresponds to an operation which maps a node to another. We sometimes annotate the output node with the name of the operation applied. In particular, the computational graph corresponding to the objective function is a DAG(directed acyclic graphs)

[11]. For example, the computational graph of the objective function J shown in Fig. 2 (a), the corresponding composite form (1) is:

For a given general objective function, let G correspond to a computational graph that maps the set of leaf values VGθ={~θj|j=1,⋯,N} to the output value J, where the set of hidden values is VGσ={~σi|i=1,⋯,M}. Let VGθ→σ:={~σ′i|i=1,⋯,M′}={~σi∈VGσ|dist(~σi,VGθ)=1}. In this paper, the objective function J in Eqn.(1) will be expressed as the following composite form:

For example, Eqn.(8) can be expressed as:

In deeping learning, the gradient of the objective function is usually calculated by the Automatic Differentiation (AD) technique

[12, 9]. Our following example introduces how to calculate the gradient of J in Eqn.(8) using AD technique.

According to the definition of virtual gradient, for any ~θk∈VGθ:

Obviously, ∇~θkJ=∇(G,I)~θkJ where I is an identity operator. The bprop operation gw→~σ′i is uniquely determined by ~fi.

Then, the Eqn.(6) can be written as the following virtual gradient descent iteration:

We prove that the SVGD (Alg. 1

) has advantages over SGD, RMSProp and Adam in training speed and test accuracy by experiments on multiple network models and datasets.

In Sec.2 we describe the operator T and the SVGD algorithm of stochastic optimization. Sec.3 introduce two methods to encapsulate SVGD, and Sec.4 provides a theoretical analysis of convergence. Sec.6 compares our method with other methods by experiments.

In this section, we will use the accumulate squared gradient in the RMSProp to construct the operator T. According to Eqn.(7), Eqn.(3) holds when the mapping f is linear. Based on this fact, we designed the following SVGD algorithm. The functions and variables in the algorithm are given by Eqn.(9) and Eqn.(10).

9, 11, 12), it has a relatively faster convergence rate and better test accuracy than SGD, RMSProp, and Adam.

For the linear operation Conv2D [13] and matrix multiplication MatMul as follows:

there are Dim(rConv2D)=HoutWoutCout<HkWkCinCout and Dim(rMatMul)=Cout<CinCout. Thus, SVGD also has less memory requirements than RMSProp and Adam for deep neural networks.

For the same stochastic objective function, the learning rate at timestep t in SVGD has the following relationship with the stepsize in the SGD and RMSProp:

We hope to generate the computational graph of virtual gradients by using the function "gradients", Fig. 4 (c).

As shown in Fig. 4, We begin by replacing ~fi with ^fi, where ^fi is a copy of ~fi but corresponds to a new bprob operation. Then, call the function "gradients" to generate the computational graph of virtual gradients.

In order to achieve the idea above, in programming, we need to extending core libraries to customize new operations of ^fi and its bprop operation. Fig. 5

3.2 Modify the topology of the calculation graph

In this section, we will analyze the theoretical convergence of Eqn.(6) under some assumptions. Let M be a random (m×n)-matrix, M11,⋯,Mij,⋯,Mmn be an i.i.d. variable from U(−∞,+∞). Then

Let ei be the unit vector whose i-th component is 1, fλ is bilinear, Then

be second-order differentiable functions with random variables in their expression, we set:

Without loss of generality, we can assume θ∈Rn,σ=f(θ)∈Rm,m>n. Then, the Maclaurin series for F(f(θ))) around the point θ(t) is:

Although our convergence analysis in Thm.4

only applies to the assumption of uniform distribution, we empirically found that SVGD often outperforms other methods in general cases.

However, in SVGD method, p(t)=−∇(G,T)θJ cannot be written as a function of g(t). Thus, SVGD is not essentially a first-order method.

Global minimum. A central challenge of non-convex optimization is avoiding sub-optimal local minima. Although it has been shown that the variable can sometimes converges to a neighborhood of the global minimum by adding noise[16, 17, 18, 19, 20]

, the convergence rate is still a problem. Note that the DP method has some probability to escape “appropriately shallow” local minima because the moving direction of the variable is generated by solving several sub-problems instead of the original problem. We use computational graph and automatic differentiation to generate the sub-problems in DP, such as what we did in the SVGD method.

In this section, we evaluated our method on two benchmark datasets using several different neural network architectures. We train the neural networks using RMSProp, Adam, SGD, and SVGD to minimize the cross-entropy objective function with L1 weight decay on the parameters to prevent over-fitting. To be fair, for different methods, a given objective function will be minimized with different learning rates. All extension libs, algorithm, and experimental logs in this paper can be found at the URL: https://github.com/LizhengMathAi/svgd.

The following experiments show that SVGD has a relatively faster convergence rate and better test accuracy than SGD, RMSProp, and Adam.

In our first set of experiments, we train a 5-layer neural network (Fig. 8) on the MNIST [21] handwritten digit classification task.

The model is trained with a mini-batch size of 32 and weight decay of 1.0×10−4. In Table 1, we decay α at 1.6k and 3.6k iterations and summarize the optimal learning rates for RMSProp, Adam, SGD, and SVGD by hundreds of experiments.

In Table 1 and Fig. 9 we compare the error rates and their descent process process on the CIFAR-10 test set, respectively.

We train a VGG model (Fig. 10) on the CIFAR-10 [22] classification task and follow the simple data augmentation in [23, 24] for training and evaluate the original image for testing.

The model is trained with a mini-batch size of 128 and weight decay of 1.0×10−5. In Table 2, we decay α at 12k and 24k iterations and summarize the optimal learning rates for RMSProp, Adam, SGD, and SVGD by hundreds of experiments.

In Table 2 and Fig. 11 we compare the error rates and their descent process on the CIFAR-10 test set, respectively.

We use the same hyperparameters with

[24] to train ResNet-20 model(0.27M params) on the CIFAR-10 classification task. In Table 3, we decay α at 12k and 24k iterations and summarize the optimal learning rates for RMSProp, Adam, SGD, and SVGD by hundreds of experiments.

In Table 3 and Fig. 12 we compare the error rates and their descent process on the CIFAR-10 test set, respectively. The top-1 error fluctuations in experiments do not exceed 1%. See [25] for more information on the CIFAR-10 experimental record.