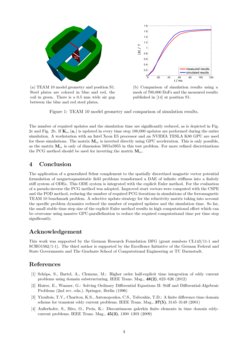 A Darwin Time Domain Scheme for the Simulation of Transient Quasistatic Electromagnetic Fields Including Resistive, Capacitive and Inductive Effects

Spatially discretizing the magnetic vector potential formulation of eddy current problems, e.g by the Finite Element Method (FEM), yields a differential-algebraic equation system (DAE) [1]. Commonly, only unconditionally stable implicit time integration methods as e.g. the implicit Euler method or the singly diagonal implicit Runge-Kutta schemes can be used for time integration of the infinitely stiff DAE system [2]. In every time step at least one large nonlinear algebraic equation system needs to be solved due to the nonlinear BH-characteristic in ferromagnetic materials. The Newton-Raphson method is frequently used for linearization and requires at least one iteration per time step. Here, the Jacobian and the resulting stiffness matrix are updated in each iteration and the resulting linear algebraic equation system needs to be solved efficiently.

Applying explicit time integration schemes avoids the necessity of linearization, because nonlinearities only appear in right-hand side expressions. A first approach to use an explicit time integration method for eddy current problems has been proposed in [3], where in the conducting regions of the problems the Finite Difference Time Domain (FDTD) method is used. In the nonconducting regions, i.e., in the air, the corresponding parts of the solution are computed using the boundary element method (BEM) [3]. In a second approach presented in [4], the Discontinuous Galerkin FEM and an explicit time integration method are used for computations in the conducting regions. Continuous FEM ansatz functions and an implicit time integration scheme are applied to the nonconducting regions of the problem [4]. Both approaches in [3] and [4] are based on a separate treatment of conducting and nonconducting regions. A different approach presented in [1] and [5] proposes a Schur complement reformulation of the eddy current problem. In[6] the use of a generalized Schur complement is proposed. Here, a pseudo-inverse of the singular curl-curl matrix in nonconducting regions is evaluated using the preconditioned conjugate gradient (PCG) method. This evaluation forms a multiple-right hand side problem and suitable start vectors for the PCG method are computed using the cascaded Subspace Projection Extrapolation (CSPE) method, which is a modification of the Subspace Projection Extrapolation (SPE) method [7, 6]. Alternatively, the Proper Orthogonal Decomposition (POD) method can be used for computing improved start vectors [8]. Computations can be accelerated further by using a selective update strategy for updating the reluctivity matrix in conducting regions [9]. This paper presents a survey on the methods presented in [6, 8, 9].

where M is the mass-matrix, a is the time dependent vector of the magnetic vector potential, K is the stiffness-matrix and js

is the vector of the transient source currents. The degrees of freedom (DoFs) are separated into two vectors

ac and an for conducting and nonconducting material, respectively and (2) is re-ordered into

where K+nn is the matrix representation of a pseudo-inverse of Knn, is applied to (3) and transforms the DAE into an ordinary differential equation (ODE) system

for the vector ac, i.e., the degrees of freedom only situated in conductive material [5, 1, 6]. The preconditioned conjugate gradient (PCG) method is used for evaluating a pseudo-inverse of Knn [6]. Alternatively, the singular matrix Knn can be regularized using a grad-div regularization by which Knn is transformed into the discrete Laplacian operator in free space [5]. Due to finite stiffness, (5) can be integrated in time using explicit time integration schemes as e.g. the explicit Euler method. Here, in the m-th time step the expressions

are evaluated for the degrees of freedom in the conductor domain and in the nonconductive domains consecutively, where Δt is the time step size.

Evaluating a pseudo-inverse of Knn and the inverse of Mcc in (7) and (8) repeatedly using the PCG method forms multiple right-hand side (mrhs) problems since the matrices involved remain constant. The subspace extrapolation (SPE) method can be used for computing improved start vectors for the PCG method [7, 6]. Solution vectors from n previous time steps are orthonormalized using the modified Gram-Schmidt method and form the linearly independent column vectors of the operator V. The projected system

where r represents the new right-hand side for the full system, is solved for z∈Rn using a direct method. The linear combination of the column vectors in V weighted with the coefficients in z yields the improved start vector x0,CSPE:

Only the last column vector in the operator V changes in every time step. Therefore, when computing KnnV in (9), all other matrix-column-vector products evaluated can be reused from previous time steps. This modification of the SPE start vector generation method is referred to as ”cascaded SPE” (CSPE).

Alternatively, the proper orthogonal decomposition (POD) method can be used for computing improved start vectors for the PCG method [8, 12]. A snapshot matrix X

is assembled using solutions from previous time steps as column vectors. This matrix is decomposed by the singular value decomposition (SVD)

become the column vectors of the reduced matrix Ur with a threshold value tolPOD. A threshold value commonly used in practical computations is tolPOD:=104. The improved start vector x0,POD for the PCG method is computed by

The explicit Euler method is only stable for time step sizes Δt smaller than a Courant-Friedrich-Levy-type time step size ΔtCFL given by [1]:

where the maximum eigenvalue

λmax is proportional to

assuming non-singularity of Mcc. Here, h is the smallest edge length in the mesh, κ is the electrical conductivity, and μ is the permeability. Numerical tests have shown that 1/(h2κμ)

unfortunately does not give a sharp estimate of

λmax, such that the largest eigenvalue has to be computed numerically.

Fine spatial discretization can result in small stable time step sizes, due to (15), that can be in the micro- to nano second range. Considering the dynamics of the usual excitation currents in magnetoquasistatic problems, this corresponds to a strong over-sampling. It is assumed that the excitation current does not change significantly between succeeding time steps. Therefore it is expected that the vector ac in (7), (8) also only changes marginally between succeeding time steps. The matrix Kcc(ac) is thus only updated if the change between the vector amc at the time step m and the vector alc from the time step l<m at which the matrix Kcc(alc) has last been updated is larger than a chosen tolerance tol, as described by [9]:

where ∥⋅∥ denotes the l2-norm. However, depending on the gauging used, a different norm might be more appropriate, e.g. using the magnetic energy norm.

The ferromagnetic TEAM 10 benchmark problem is spatially discretized using first order edge element FEM ansatz functions [14, 15]. The model geometry is shown in Fig. 0(a). The excitation current is described by a (1−exp(−t/τ)) function. A time interval of 120ms duration is calculated. The accuracy of the employed simulation code is proven using an implicit time integration method and a fine mesh discretization of about 700,000 DoFs. The resulting average magnetic flux density is compared with the measurement results published in [14] in Fig. 0(b). As this simulation takes a simulation time of 5.38 days on a workstation with an Intel Xeon E5 processor, a coarser mesh is applied for the simulations using the explicit Euler method for time integration. The applied coarse spatial discretization yields 29,532 DoFs and results in a maximum stable time step size ΔtCFL=1.2μs, such that 100,000 explicit Euler time steps are required for this problem.

Computing improved start vectors for the PCG method using either CSPE or POD reduces the average number of required PCG iterations compared to using the solution from the previous time step as start vector. An algebraic multigrid method is used as preconditioner. The results for the evaluation of the pseudo-inverse of Knn using a PCG tolerance of 10−6 are shown in Fig. 1(a). Using the selective update strategy for updating the matrix Kcc(ac) does not significantly decrease accuracy, as is shown in Fig. 1(d). The number of required updates and the simulation time are significantly reduced, as is depicted in Fig. 1(c) and Fig. 1(b). If Kcc(ac) is updated in every time step 100,000 updates are performed during the entire simulation. A workstation with an Intel Xeon E5 processor and an NVIDIA TESLA K80 GPU are used for these simulations. The matrix Mcc is inverted directly using GPU acceleration. This is only possible, as the matrix Mcc is only of dimension 5955x5955 in this test problem. For more refined discretizations the PCG method should be used for inverting the matrix Mcc.

The application of a generalized Schur complement to the spatially discretized magnetic vector potential formulation of magnetoquasistatic field problems transformed a DAE of infinite stiffness into a finitely stiff system of ODEs. This ODE system is integrated with the explicit Euler method. For the evaluation of a pseudo-inverse the PCG method was adopted. Improved start vectors were computed with the CSPE and the POD method, reducing the number of required PCG iterations in simulations of the ferromagnetic TEAM 10 benchmark problem. A selective update strategy for the reluctivity matrix taking into account the specific problem dynamics reduced the number of required updates and the simulation time. So far, the small stable time step size of the explicit Euler method results in high computational effort which can be overcome using massive GPU-parallelization to reduce the required computational time per time step significantly.

This work was supported by the German Research Foundation DFG (grant numbers CL143/11-1 and SCHO1562/1-1). The third author is supported by the Excellence Initiative of the German Federal and State Governments and The Graduate School of Computational Engineering at TU Darmstadt.