Immersive social interactions of mobile users are soon to be enabled within a virtual space, by means of virtual reality (VR) technologies and wireless cellular systems. In a VR mobile social network, the states of all interacting users should be updated synchronously and with low latency via two-way communications with edge computing servers. The resulting end-to-end latency depends on the relationship between the virtual and physical locations of the wireless VR users and of the edge servers. In this work, the problem of analyzing and optimizing the end-to-end latency is investigated for a simple network topology, yielding important insights into the interplay between physical and virtual geometries. 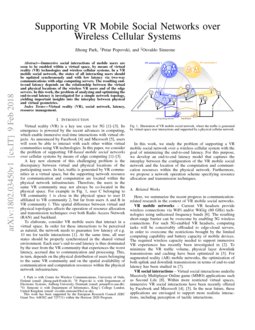 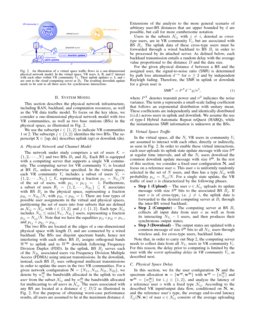 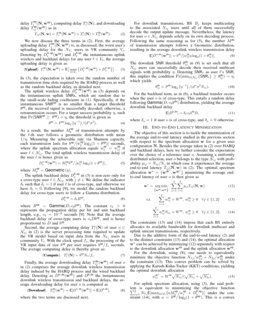 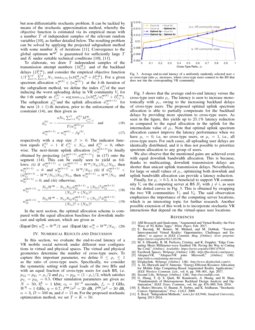 Virtual reality (VR) is a key use case for 5G [ABIQualcommVR:17, EjderVR:17, MohammedWCNC:18, NokiaVR:18]. Its emergence is powered by the recent advances in computing, which enable immersive real-time interactions with virtual objects. As announced by Facebook [FBspaces:17] and Microsoft [MicrosoftMR], users will soon be able to interact with each other within virtual communities using VR technologies. In this paper, we consider the problem of supporting VR-based mobile social networks over cellular systems by means of edge computing [ABIQualcommVR:17, EjderVR:17, MohammedWCNC:18, NokiaVR:18].

A key new element of this challenging problem is the discrepancy between virtual and physical locations of the participating users. In fact, traffic is generated by VR communities in a virtual space, but the supporting network resource for communication and computation are located within the physical network infrastructure. Therefore, the users in the same VR community may not always be co-located in the physical space. For example in Fig. 1, user C belonging to VR community 1 is close in the physical space to user D affiliated to VR community 2, but far from users A and B in VR community 1. This spatial difference between virtual and physical topologies affects the operation of resource allocation and transmission techniques over both Radio Access Network (RAN) and backhaul.

To elaborate, consider VR mobile users that interact in a virtual space. In order for these interactions to be perceived as natural, the network needs to guarantee low latency of e.g. 10 ms for tactile interactions [ABIQualcommVR:17]. At the same time, all user states should be properly synchronized in the shared virtual environment. Each user’s end-to-end latency is thus dominated by the user from the VR community that experiences the worst latency, accrued due to communication and processing. This, in turn, depends on the physical distribution of users belonging to the same VR community and on the spatial availability of communication and computation resources within the physical network infrastructure.

In this work, we study the problem of supporting a VR mobile social network over a multi-cell wireless cellular system with the goal of minimizing the end-to-end latency. Specifically, we focus on the problem of minimizing the end-to-end latency via the bandwidth allocation of the uplink and downlink channels used for communication between users and computing servers. To this end, we formulate a simple model based on a linear cellular topology that captures the interplay between the social interactions within the VR mobile social network and the location of the computation and communication resources within the physical network. The average end-to-end latency is evaluated by accounting for the contributions of uplink, downlink, and backhaul transmissions, as well as for processing times at the servers. The resulting latency is minimized through a stochastic optimization technique.

The required wireless capacity needed to support immersive VR experiences has recently been investigated in [EjderVR:17]. To minimize the VR traffic volume, a caching approach has been proposed in [MohammedWCNC:18]. In a VR theater scenario, a multicast design has been studied in [NokiaVR:18]. These works [EjderVR:17, MohammedWCNC:18, NokiaVR:18] focus only on optimizing the downlink operations. For augmented reality (AR) applications, the optimization of both uplink and downlink transmissions in terms of end-to-end latency has been studied in [OsvaldoAR:17] for a single-cell scenario. Due to the focus on AR, end-to-end latency model of reference [OsvaldoAR:17] does not take into account virtual social interactions. Finally, virtual social interactions underlie Massively Multiplayer Online game (MMO) applications such as Second Life [SecondLife]. Within more restricted virtual spaces, immersive VR social interactions have been recently provisioned by Facebook and Microsoft [FBspaces:17, MicrosoftMR].

We use the subscript i∈{1,2} to indicate VR communities 1 or 2. The subscript j∈{1,2} identifies the two BSs. The superscript X∈{up,dn} describes uplink (up) or downlink (dn) operations at a BS.

The network under study comprises a set of users K={1,2,⋯,N} and two BSs B1 and B2. Each BS is equipped with a computing server that supports a single VR community. The computing server for VR community Vi is located at BS Bi, unless otherwise specified. In the virtual space, each VR community Vi includes a subset of users Vi={1,2,⋯,NVi}⊆K, representing a fraction pVi=NVi/N of the set of users, with pV1+pV2= 1. Furthermore, a subset of users Bj={1,2,⋯,NBj}⊆K associates with BS Bj for both uplink and downlink transmissions in the physical space, representing a fraction pBj=NBj/N, with pB1+pB2=1. There are four types of possible user assignments in the virtual and physical spaces, partitioning the set of users into four subsets that are defined as Nij=Vi∩Bj with i∈{1,2} and j∈{1,2}. Each type Nij includes Nij≤min{NVi,NBj} users, representing a fraction pij=Nij/N. Note that we have the equalities pi1+pi2=pVi, and p1j+p2j=pBj.

The two BSs are located at the edges of a one-dimensional physical space with length D, and are connected by a wired backhaul. The BSs use disjoint spectrum bands, hence not interfering with each other. BS Bj assigns orthogonal bands Wup to uplink and to Wdn downlink following Frequency Division Duplex (FDD). In the uplink, BS Bj serves each of the NBj associated users via Frequency Division Multiple Access (FDMA) using unicast transmissions. In the downlink, instead, each BS Bj uses orthogonal multicast transmissions in order to update the users in the two VR communities. For a given user configuration N={N11,N12,N21,N22}, we denote by wupij the bandwidth allocated in the uplink to each user from the subset Nij and by wdnij the bandwidth allocated for multicasting to all users in Nij. The users associated with any BS are located at a distance d≤D/2 as illustrated in Fig. 2. For the purpose of obtaining worst-case performance results, all users are assumed to lie at the maximum distance d. Extensions of the analysis to the more general scenario of arbitrary user-BS distances that are upper bounded by d are possible, but call for more cumbersome notation.

Users in the subsets Nij with j≠i, denoted as cross-type users, are in VR community Vi, but are associated with BS Bj. The uplink data of these cross-type users must be forwarded through a wired backhaul to BS Bi in order to be processed by its attached server. As defined below, each backhaul transmission entails a random delay with the average value proportional to the distance D and the data size.

For the given physical distance d between a BS and the assigned user, the signal-to-noise ratio (SNR) is determined by path loss attenuation d−α for α≥2 and by independent Rayleigh fading. Therefore, the SNR in uplink or downlink for a given user is

indicates the noise variance. The term

represents a small-scale fading coefficient that follows an exponential distribution with unitary mean. These coefficients are independently and identically distributed (i.i.d.) across users in uplink and downlink. We assume the use of type-I Hybrid Automatic Repeat reQuest (HARQ), while the instantaneous

SNR information is unknown at the BSs.

In the virtual space, all the Ni VR users in community Vi are assumed to interact with each other, directly or indirectly, as seen in Fig. 2. In order to enable these virtual interactions, each user uploads its uplink state update message with size bup at regular time intervals, and all the Ni users download the common downlink update message with size bdn. We hereafter consider a fixed users’ allocation in physical and virtual spaces given by N={Nij}. With this given user configuration N, we focus on a reference user o. This user o is uniformly randomly selected in the set of N users, and thus has a type Nij

pij=Nij/N. For a single state update, the VR traffic of user o is characterized by the following phases.

Note that, in order to carry out Step 2, the computing server needs to collect data from all NVi users in VR community Vi. For this reason, the delay prior to computing is limited by the user with the worst uploading delay in VR community Vi, as described next.

In this section, we fix the user configuration N and the spectrum allocation w={wup,wdn} with wup={wupij} and wdn={wdnij} for i,j∈{1,2}, and analyze the latency of a reference user o with a fixed type Nij. According to the described VR input/output data flow, conditioned on N, w, and the reference user’s type, the average end-to-end latency Tij(N,w) of user o∈Nij consists of the average uploading delay Tupi(N,wup), computing delay Tci(N), and downloading delay Tdnij(wdn) as in

In (3), the expectation is taken over the random number of transmission time slots required by the HARQ process as well as the random backhaul delay, as detailed next.

The uplink wireless delay Dw.upℓ(wup) in (3) depends on the instantaneous uplink SNRs, which are random due to the small-scale fading coefficients in (1). Specifically, if the instantaneous SNRup is no smaller than a target threshold θup, the received signal is successfully decoded; otherwise, a retransmission occurs. For a target success probability η, such that Pr(SNRup≥ θup)=η, the threshold is given as

As a result, the number Mupℓ of transmission attempts by the ℓ

1/η. Measuring the achievable rate via Shannon capacity, each transmission lasts for bup/[wupℓlog2(1+θup)] seconds, where the uplink spectrum allocation equals wupℓ=wupij if user ℓ∈Nij. The total uplink wireless transmission delay of the user ℓ is hence given as