As many algorithms depend on a suitable representation of data, learning unique features is considered a crucial task. Although supervised techniques using deep neural networks have boosted the performance of representation learning, the need for a large set of labeled data limits the application of such methods. As an example, high-quality delineations of regions of interest in the field of pathology is a tedious and time-consuming task due to the large image dimensions. In this work, we explored the performance of a deep neural network and triplet loss in the area of representation learning. We investigated the notion of similarity and dissimilarity in pathology whole-slide images and compared different setups from unsupervised and semi-supervised to supervised learning in our experiments. Additionally, different approaches were tested, applying few-shot learning on two publicly available pathology image datasets. We achieved high accuracy and generalization when the learned representations were applied to two different pathology datasets. 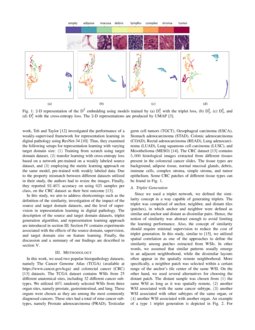 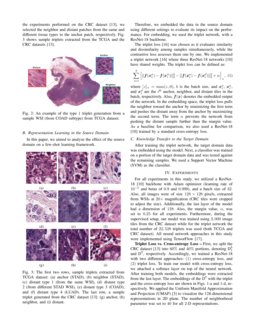 With the advent of digital whole-slide image (WSI) scanners and digital pathology, a vast range of computer-vision algorithms using machine learning have been developed to process histopathology images. These technologies offer opportunities for better quantitative modeling of disease appearance and hence possibly improved prediction of disease severity and aggressiveness, and patient outcome. More specifically, machine-learning applications in digital pathology ranges from computer-aided diagnosis based on classification, detection, segmentation, and content-based image retrieval. But domain-specific limitations such as large image dimensions and insufficient amount of annotated data restrict the applicability of such approaches

Current deep learning algorithms may reach or surpass human-level accuracy when a large amount of data is available. However, deep networks suffer from poor sample efficiency in stark contrast to human perception that can learn object categories after seeing just a few pictures, in some cases even one instance. Few-shot learning as the ability to learn from a few labeled samples aims to address this issue. More specifically, the knowledge is extracted from other similar problems since there is not enough data. As a result, many methods characterize few-shot learning as a meta-learning problem.

Koch et al. [9] suggested the Siamese network as a choice for representation learning based on sample-wise comparisons. The Siamese networks generally consist of two similar neural networks that accept two inputs from either the same or different classes. The pair is embedded by identical neural networks first. Then the component-wise difference of the representations is passed into a comparison neural network. By doing so, the Siamese network learns to identify discrepancies between classes. Later, Hoffer and Ailon [6] proposed triplet networks for representation learning that learned the configuration among anchor, positive, and negative cases (or triplets) simultaneously. In detail, the triplet network learned to put anchor and positive samples closer while pushing the negative samples farther in the latent space. These works fall within a greater field of study called distance metric learning [15]. Medela et al. [12] employed triplet networks on the colorectal cancer slides as a source domain, and utilized their model to extract features and represent data from the healthy and tumorous colon, breast, and lung slides as the target domain. For this purpose, they utilized a VGG16 model [14] as the backbone of their triplet network while they replaced the last fully connected layer with a more compact version. They used labels provided by pathologists in the source domain to create triplets. Furthermore, due to the mismatch between the properties of source and target domain, images were adjusted through rescaling.

Gildenblat and Klaiman [4] trained a Siamese network based on a ResNet-50 architecture [5] by acknowledging adjunct patches as similar and remote tiles as non-similar cases. They both trained and tested their model on the Camelyon16 dataset [2]. Eventually, they evaluated their model in a tumor image retrieval task using the Camelyon16 test set. They reported 34% as the ratio of correctly retrieved tumorous patches in comparison with only 26% accuracy using a ResNet-50 [5]

with ImageNet weights. In another work, Teh and Taylor

[16] investigated the performance of a weakly-supervised framework for representation learning in digital pathology using ResNet-34 [5]. Thus, they examined the following setups for representation learning with varying target domain size: (1) Training from scratch using target domain dataset, (2)transfer learning with cross-entropy loss based on a network pre-trained on a weakly labeled source dataset, and (3) employing the metric learning approach on the same model, pre-trained with weakly labeled data. Due to the property mismatch between different datasets utilized in their study, the authors had to resize the images. Finally, they reported 92.46% accuracy on using 625 samples per class, on the CRC dataset as their best outcome [8].

Since we used a triplet network, we defined the similarity concept in a way capable of generating triplets. The triplet was comprised of anchor, neighbor, and distant tiles (patches), in which anchor and neighbor were defined as similar and anchor and distant as dissimilar pairs. Hence, the notion of similarity was abstract enough to avoid limiting the learning performance. Also, the concept of similarity should require minimal supervision to reduce the cost of triplet generation. In this study, similar to [7], we utilized spatial correlation as one of the approaches to define the similarity among patches extracted from WSIs. In other words, we assumed that similar patterns usually emerge in an adjacent neighborhood, while the dissimilar layouts often appear in the spatially remote neighborhood. More specifically, a neighbor patch was selected within a certain range of the anchor’s tile center of the same WSI. On the other hand, we used several alternatives for choosing the distant patch. The distant sample was chosen from (1) the same WSI as long as it was spatially remote, (2) another WSI associated with the same cancer subtype, (3) another WSI associated with other subtypes of the same organ, or (4) another WSI associated with another organ. An example of a type 1 triplet generation is depicted in Fig. 2. For the experiments performed on the CRC dataset [8], we selected the neighbor and distant patches from the same and different tissue types to the anchor patch, respectively. Fig. 3 shows sample triplets extracted from the TCGA and the CRC datasets [8].

In this paper, we aimed to analyze the effect of the source domain on a few-shot learning framework.

Therefore, we embedded the data in the source domain using different settings to evaluate its impact on the performance. For embedding, we used the triplet network, with a ResNet-18 backbone.

The triplet loss [13] was chosen as it evaluates similarity and dissimilarity among samples simultaneously, while the contrastive loss assesses them one by one. We implemented a triplet network [13] where three ResNet-18 networks [5] have shared weights. The triplet loss can be defined as:

where [z]+=max(z,0), b is the batch size, and xai, xni, and xdi are the ith anchor, neighbor, and distant tiles in the batch, respectively. Also, f(x) denotes the embedded output of the network. In the embedding space, the triplet loss pulls the neighbor toward the anchor by minimizing the first term and pushes the distant away from the anchor by maximizing the second term. The term α prevents the network from pushing the distant sample further than the margin value. As a baseline for comparison, we also used a ResNet-18 [5] trained by a standard cross-entropy loss.

For all experiments in this study, we utilized a ResNet-18 [5] backbone with Adam optimizer (learning rate of 10−5 and betas of 0.9 and 0.999), and a batch size of 32. Also, all images were of size 128×128 pixels, extracted from WSIs at 20× magnification (CRC tiles were cropped to adjust the size). Additionally, the last layer of the model had a dimension of 128. Also, the margin value, α, was set to 0.25 for all experiments. Furthermore, during the supervised setup, our model was trained using 3,000 image tiles from the CRC dataset while for the triplet network the total number of 22,528

triplets was used (both TCGA and CRC dataset). All neural network approaches in this study were implemented using TensorFlow

Triplet Loss vs. Cross-entropy Loss – First, we split the CRC dataset [8] into 60% and 40% portions, denoting DS1 and DT, respectively. Accordingly, we trained a ResNet-18 with two different approaches: (1) cross-entropy loss, and (2)

triplet loss. To train our model with cross-entropy loss, we attached a softmax layer on top of the neural network. After training both models, the embeddings were extracted from the last layer. The embeddings of the

DT with the triplet and the cross-entropy loss are shown in Figs. 1-a and 1-d, respectively. We applied the Uniform Manifold Approximation and Projection (UMAP) [11] to visualize the 128-dimensional representations in 2D plane. The number of neighborhood parameter was set to 40 for all 2-D representations.

Source Domain Effect – The triplets extracted from the CRC training set were sampled in a supervised manner as the labels of tissues were used. However, as we described in Section III-A, the triplets of TCGA data were sampled using the spatial and tissue type information in an unsupervised manner. As a result, we trained extra two models on triplets extracted from TCGA. The first one was trained on all three anatomical sites, called DS2, while the second model was only trained on the gastrointestinal data from TCGA called DS3 as the DT was also related to the same anatomical site. Similarly, the DT embeddings encoded by these models are shown in Figs. 1-b and 1-c.

Target Domain Size Effect – Finally, we split the DT into chunks of 5%, 10%, 25%, and 50% using stratified sampling, besides the full set. Then we trained an SVM classifier utilizing 10-fold cross-validation on the latter subsets. For all experiments, all SVM classifiers were fine-tuned by changing the kernel (linear, RBF, sigmoid, and polynomial), and the parameters C (between 0.001, and 1000) and gamma (between 0.001 and 1000, scale and auto) to achieve the best performance. All results are reported in Table I.

As it is depicted in Fig. 1, empty and adipose tiles’ representation were closely located to each other and far from other tissue textures in all models. Also, the mucosa was almost well-clustered in all embeddings because of its unique pattern. Moreover, the corresponding representations of classes with visual similarities blended in 2-D space when the triplet loss was employed. According to Table I, however, all models trained by the triplet loss scored higher in terms of mean accuracy in comparison to the model trained with the label information using cross-entropy loss, excluding 5% subset. The confidence intervals shrunk as the size of the target data increased. Furthermore, the confidence interval was relatively larger when the source domain was different from the target domain. More importantly, the highest accuracy, 95.95%, was achieved using the model which was trained on the gastrointestinal subset of the TCGA. This outcome may suggest that extensive training on a similar dataset using weakly supervised and unsupervised methods can improve the performance of the model and generalization of the solution.

In this work, We investigated the effect of the supervision and the source domain in embedding and few-shot learning for histopathology images. Accordingly, we have shown that a network can learn a meaningful representation from histopathology images using a massive amount of the weakly labeled data currently available online. This was achieved by acknowledging the spatial correlation, anatomical information, and slide level diagnosis.