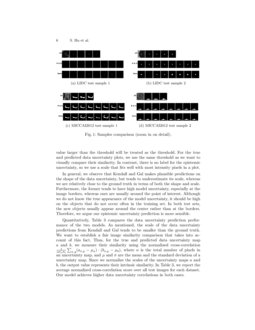 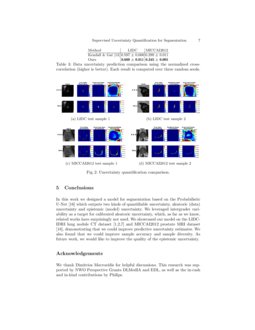 In recent years, deep learning has propelled the state of the art in segmentation in medical imaging [11, 10, 6, 22, 16]. However, previous works tend to focus on maximizing accuracy, ignoring predictive uncertainty. Modeling uncertainty at the per-pixel level is as important as accuracy, especially in medical scenarios, since it informs clinicians about the trustworthiness of a model’s outputs [21, 13].

, then we define aleatoric uncertainty to be the per-pixel variance among these segmentations

Vp(D)[yi]=1D∑Dj=1(yji−¯yi)2, where ¯yi=1D∑Dj=1yji. Datasets containing multiple annotations exist in the literature, such as [1, 2, 7, 18], and it is surprising that to date the authors cannot find examples of intergrader variability being exploited.

Below we provide an overview of predictive uncertainty for deep learning.

, and a neural network with parameters/hidden variables

θ. We can think of the neural network as a conditional distribution p(y|x,θ). Given test image x∗

[19] is p(y∗|x∗,D)=∫p(y∗|x∗,θ)p(θ|D)dθ, where p(θ|D) is a posterior distribution over θ given the training data. This quantity is intractable to find [4], so it is typically approximated by some qλ(θ) from a tractable family of distributions, where λ is called the variational parameters. Typically the approximation is fitted by minimizing the reverse KL-divergence KL[qλ(θ)∥p(θ|D)]. This is intractable, since it contains the intractable posterior term, but can be rearranged into the ELBO evidence lower-bound [4]: minλKL[qλ(θ)∥p(θ|D)]=maxλEqλ(θ)[logp(D|θ)]+KL[qλ(θ)∥p(θ)], where p(θ) is a prior on θ and p(D|θ)=∏Ni=1p(yi|xi,θ). The predictive uncertainty is the variance of the posterior predictive distribution.

Aleatoric and Epistemic Uncertainty The predictive uncertainty can be decomposed into two parts. By the law of total variance, we can write predictive variances as a sum of these two independent components:

where we have used the notation E and V for the expectation and variance operator. We have labeled the two right-hand terms as aleatoric and epistemic uncertainty. The aleatoric term measures the average of the output variance Vp(y|θ,x)[y], under all settings of the variables θ. If qλ(θ) were a delta peak, we would expect this term not to vanish and thus is it associated with aleatoric (data) uncertainty [21]. The epistemic term measures fluctuations in the mean prediction. These fluctuations exist because of uncertainty in the approximate posterior qλ(θ). If qλ(θ) were a delta peak, then this term would vanish to zero, and thus we associate it with epistemic (model) uncertainty [21, 13].

.They also proposed a method which would work for classification, where they predict a mean and variance in the logit-space just before a sigmoid. Jungo

The Probabilistic U-Net In the Probabilistic U-Net [16], the approximate posterior distribution is given the form qλ(z|x,y), where we have set θ=z. The hidden variables are thus activations z|x,y dependent on the training data. A (conditional) prior over z is given by a prior network pλ(z|x). To train this setup, the authors employ a variant of the ELBO with a β-weight on the KL-penalty

Again, λ represents the variational parameters to be optimized. Since at test time we do not have access to y, we use the prior network and Monte Carlo sample in p(y∗|x∗,D)=∫pλ(y∗|x∗,z)pλ(z|x∗)dz. The specific form of the likelihood p(y|x,z) can be found in the original paper [16]. This method is known to produce very diverse samples, from which we could estimate aleatoric uncertainty. In this paper, we endow the Probabilistic U-Net with a mechanism to estimate epistemic uncertainty and extend this method yet further, such that the aleatoric uncertainty estimates are automatically calibrated to the training set.

We improve upon the Probabilistic U-Net model with two innovations. First, the original framework does not contain a mechanism to measure epistemic uncertainty. This can be included by adding variational dropout [14] after the last convolution layer in the U-Net. This corresponds to setting θ=(z,w) and qλ(θ)=qλ(w)qλ(z|x,y), where w are CNN weights. The objective defined in Eq. 2 then changes to:

Notice that as N becomes very large the relative weight of the last KL term reduces, so the prior on w is ignored [8]. The objective is maximized when qλ(w) is a delta peak on the maximum likelihood parameters, corresponding to zero model uncertainty. For our second innovation, we use intergrader variability Vp(D)[y] as a training target for the predicted aleatoric uncertainty Eqλ(θ)[Vp(y|θ,x)[y]]. We found directly minimizing the L1 or L2

distance between the two does not work well. Instead, since for binary variables the mean and variance are tied, we match the means

pg=Ep(D)[y] and pm=Eqλ(θ)[Ep(y|θ,x)[y]] using a cross-entropy loss. This term is not part of the ELBO, so we are free to sample from the prior network since this is used at test-time. Introducing scaling coefficient γ our final training objective becomes

Datasets and Implementation Details We use two datasets where images have different but plausible annotations. First, the LIDC-IDRI dataset with 4 lesion annotations per image [1, 2, 7]. This dataset contains 1,018 lung CT scans from 1,010 lung patients with manual lesion annotations. We use the LIDC Matlab Toolbox [17] to process the slices and annotations with dimension 512 × 512, then center the lesions and crop the patches of size 128 × 128. This results in 15,096 image patches in total. We do not change the in-plane resolution. Second, the MICCAI2012 dataset with 3 prostate peripheral zone annotations per image [18]. This dataset contains 48 prostate MRI images and each image has multiple slides. We discard images that have fewer than 3 annotations, which leaves 44 images in total. For each image, the original dimension of a slide is 320 × 320, and we crop the central patch of size 128 × 128. This results in 614 image patches in total. The patches are treated independently and we feed each 2D patch to a model. Since this is a very small dataset, we use elastic transformation [20] to augment the dataset to prevent overfitting.

For each dataset, we split the train/validation/test sets with ratio 70%/15%/15%. Different than [16], we put all annotations of an image in the same mini-batch. Table 1

shows some hyperparameters used for each dataset. The ones not presented in this table are similar to

Quantitatively, we evaluate the generative results using the generalized energy distance (or D2GED) metric [16]: 2E[d(S,Y)]−E[d(S,S′)]−E[d(Y,Y′)], where d is the complement of the Intersection over Union (IoU): d(a,b)=1−IoU(a,b). S and S′ are independent samples from a model, and Y and Y′ are independent samples from the graders. Thus, the first term measures the expected difference between the samples and annotations, the second among the samples themselves and the third among the annotations themselves. In other words, this metric evaluates both the accuracy and diversity of the samples. Table 2 compares the D2GED scores on the LIDC and MICCAI2012 datasets. Since our model improves upon the Probabilistic U-Net model, we also present their numerical results for a reference111

https://github.com/stefanknegt/Probabilistic-Unet-Pytorch.. Their generative results do not look very differently from ours, so we omit them in Figure 1. For each model in Table 2, we generate 50 samples for evaluation. The table shows our model achieves better D2GED on both datasets.

Uncertainty Decomposition Figure 2 shows the aleatoric and epistemic uncertainty decomposition results. For each plot, the first row shows the results from Kendall and Gal [13] and the second row shows ours. To make the scales of these plots comparable, we set an upper threshold on the intensity values. Any value larger than the threshold will be treated as the threshold. For the true and predicted data uncertainty plots, we use the same threshold as we want to visually compare their similarity. In contrast, there is no label for the epistemic uncertainty, so we use a scale that fits well with most intensity pixels in a plot.

In general, we observe that Kendall and Gal makes plausible predictions on the shape of the data uncertainty, but tends to underestimate its scale, whereas we are relatively close to the ground truth in terms of both the shape and scale. Furthermore, the former tends to have high model uncertainty, especially at the image borders, whereas ours are usually around the point of interest. Although we do not know the true appearance of the model uncertainty, it should be high on the objects that do not occur often in the training set. In both test sets, the new objects usually appear around the center rather than at the borders. Therefore, we argue our epistemic uncertainty prediction is more sensible.

a and b, we measure their similarity using the normalized cross-correlation 1nσaσb∑x,y(ax,y−μa)⋅(bx,y−μb), where n is the total number of pixels in an uncertainty map, and μ and σ

a and b, the output value represents their intrinsic similarity. In Table 3, we report the average normalized cross-correlation score over all test images for each dataset. Our model achieves higher data uncertainty correlations in both cases.

In this work we designed a model for segmentation based on the Probabilistic U-Net [16] which outputs two kinds of quantifiable uncertainty, aleatoric (data) uncertainty and epistemic (model) uncertainty. We leveraged intergrader variability as a target for calibrated aleatoric uncertainty, which, as far as we know, related works have surprisingly not used. We showcased our model on the LIDC-IDRI lung nodule CT dataset [1, 2, 7] and MICCAI2012 prostate MRI dataset [18], demonstrating that we could improve predictive uncertainty estimates. We also found that we could improve sample accuracy and sample diversity. As future work, we would like to improve the quality of the epistemic uncertainty.

We thank Dimitrios Mavroeidis for helpful discussions. This research was supported by NWO Perspective Grants DLMedIA and EDL, as well as the in-cash and in-kind contributions by Philips.