Image hashing is a popular technique applied to large scale content-based visual retrieval due to its compact and efficient binary codes. Our work proposes a new end-to-end deep network architecture for supervised hashing which directly learns binary codes from input images and maintains good properties over binary codes such as similarity preservation, independence, and balancing. Furthermore, we also propose a new learning scheme that can cope with the binary constrained loss function. The proposed algorithm not only is scalable for learning over large-scale datasets but also outperforms state-of-the-art supervised hashing methods, which are illustrated throughout extensive experiments from various image retrieval benchmarks. 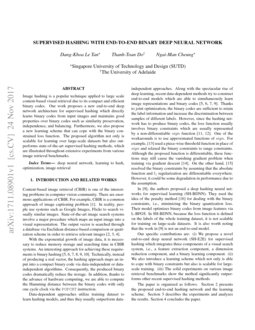 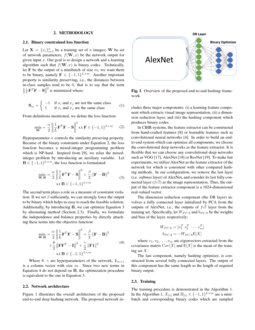 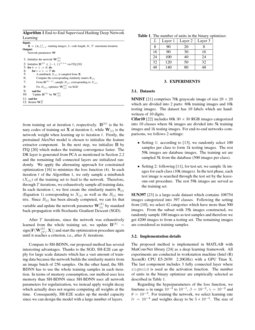 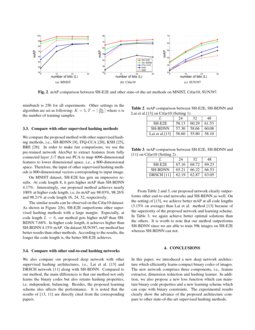 Content-based image retrieval (CBIR) is one of the interesting problems in computer vision and has enormous applications such as being a common approach for image captioning, visual searching (Google Images, Flickr). State-of-the-art image search systems involve a major component which maps an input image into a visual representation. The output vector is searched through a database via Euclidean distance-based comparison or quantization schemes in order to retrieve relevant images

[1, 2]. Due to the exponential growth of image data, it is necessary to reduce memory storage and searching time in CBIR systems. An interesting approach for achieving these requirements is binary hashing [3, 4, 5, 6, 7, 8]. Technically, instead of producing a real-valued vector as a final representation, the hashing approach maps an input into a compact binary code via data-dependent or data-independent algorithms. Consequently, the produced binary codes dramatically reduce memory storage. In addition, thanks to the advance of computer hardware, we are able to compute the Hamming distance between the binary codes within only one cycle clock via the POPCNT instruction [9].

[3, 4, 5, 7]. Thanks to joint optimization, the binary codes are able to retain label information and so increasing the discrimination. However, because the hashing network has to produce binary output, the loss function involves binary constraints which are commonly represented by a non-differentiable function, e.g., sign [10, 11]. One of the workarounds is to use approximated functions of sign. For instance, [12] used a logistic

function to relax the binary constraints to range constraints. Although the proposed functions are differentiable, these functions cause the vanishing gradient problem when training via stochastic gradient descent (SGD)

[13]. On the other hand, [14] resolved the binary constraints by assuming that the absolute function and l1 regularization are differentiable everywhere. However, it could be some degradation in performance due to the assumption.

In [7], the authors proposed a supervised hashing neural network (SH-BDNN). They used the idea of penalty method [15] to deal with the binary constraints on output codes and optimized the model via L-BFGS. Nevertheless, SH-BDNN is not an end-to-end model in which the feature representation and the binary code learning and not joint optimized.

Our specific contributions are: (i) We propose an end-to-end deep neural network (SH-E2E) for supervised hashing which integrates 3 components of a visual search system, i.e., the feature extraction component, the dimension reduction component, and the binary learning component. (ii) We also introduce a learning scheme which not only is able to cope with binary constraints but also is scalable for large-scale training. (iii) Solid experiments on 3 image retrieval benchmarks show our method significantly outperforms other supervised hashing methods.

The remaining of this paper is organized as follows. Section 2 presents the proposed end-to-end hashing network and the learning scheme. Section 3 describes the experiments and analyzes the results. Section 4 concludes the paper.

Given the set of n images X={xi}ni=1 and network parameters W, let F=f(W,X)∈{−1,1}L×n be the output of the network, i.e., F is n binary codes of length L corresponding to the input. We not only want the output to be binary but also to achieve other hashing properties. One of them is similarity preserving, i.e., samples belonging to same class should have similar codes, while samples belonging to different classes should have different codes. In other words, we want to minimize ∥∥1LFTF−S∥∥2 where:

From the definition mentioned, we define the loss function:

where hyper-parameter α controls the similarity property. Because of the binary constraints under Equation 2, the loss function becomes a mixed-integer programming problem which is NP-hard. Inspired from [7], we relax the constraints by introducing an auxiliary variable. Let B∈{−1,1}L×n, the loss function is formulated as:

The second term plays a role as a measure of constraint violation. If we set β sufficiently, we can strongly force the output to be binary, which helps us easy to reach the feasible solution. Additionally, by introducing B, we can optimize Equation 3 by alternating methods (Section 2.3). Finally, we integrate the independence and balance properties which were introduced in [11] by directly attaching them into the objective function:

Where θ, γ are hyper-parameters; 1n×1 is a n-dimensional column vector of ones.

In CBIR systems, the feature extractor can be constructed from hand-crafted features [6]

or learnable features such as convolutional neural networks

[2]. In order to build an end-to-end system which can optimize all components, we choose the convolutional deep networks as the feature extractor. It is flexible that we can choose any convolutional deep networks such as VGG [16], AlexNet [17]. To make fair experiments, we utilize AlexNet as the feature extractor of the network for which is consistent with other hashing methods compared. In the proposed design, we remove the last layer (i.e. softmax layer) of AlexNet, and consider its last fully connected layer (fc7) as the image representation. Thus, the output of the feature extractor component is a 1024-dimensional real-valued vector.

The dimension reduction component (the DR layer) involves a fully connected layer initialized by PCA from the outputs of AlexNet’s fc7 layer from the training set. Specifically, let WPCA and bPCA be the weights and bias of the layer, respectively:

are eigenvectors extracted from the covariance matrix and

. We use the identity function as the activation function of this layer.

The last component, namely the hashing optimizer, is constructed from several fully connected layers. The output of this component has the same length as the length of required binary output.

The training procedure is demonstrated in Algorithm 1 in which B(k) is the binary codes of the training set at kth iteration and W(k)(t) is SH-E2E’s parameters at the tth inner-loop of the kth outer-loop. First of all, we use a pretrained AlexNet as the initial weights of SH-E2E, namely W(0)(0). The DR layer is generated as discussed in Section 2.2

and the remaining layers are initialized randomly. In order to encourage the algorithm to converge faster, the binary variable

We apply the alternating approach to minimize the loss function (4). In each iteration t, we only sample a minibatch X(t) including m images from the training set as well as corresponding binary codes B(t) from B(k). Additionally, we create the similarity matrix S(t) (Equation 1) corresponding to X(t) as well as the B(t) matrix. Since B(t)∈{−1,1}L×m has been already computed, we can fix that variable and update the network parameter W(k)(t) by standard back-propagation via SGD. Through T iterations, we are able to exhaustively use all training data. After learning SH-E2E from the whole training set, we update B(k)=sign(f(W(k)(T),X)) and then start the optimization procedure again until it reaches a criterion, i.e., after K iterations.

Comparing to the recent supervised hashing SH-BDNN [7], the proposed framework has two advantages. SH-E2E is an end-to-end hashing network which consists both feature extraction and binary code optimization in a unified framework. It differs from SH-BDNN which requires image features as inputs. Secondly, thanks to the SGD, SH-E2E can be trained with large scale datasets because the network builds the similarity matrix from an image batch of m samples (m≪n). It differs from SH-BDNN which uses the whole training set in each iteration.

MNIST [19] comprises 70k grayscale images of 10 hand-written digits which are divided into 2 sets: 60k training images and 10k testing images. Cifar10 [20] includes 60k RGB images categorized into 10 classes where images are divided into 50k training images and 10k testing images. SUN397 [21] is a large-scale dataset which contains 108754 images categorized into 397 classes. Following the setting from [8], we select 42 categories which have more than 500 images. This results 35k images. For each class, we randomly sample 100 images as test samples and therefore we get 4200 images to form a testing set. The remaining images are considered as training samples.

. All experiments are conducted in a workstation machine (Intel(R) Xeon(R) CPU E5-2650 2.20GHz) with one Titan X GPU. The last component includes 3 fully connected layer in which the sigmoid function is used as the activation function. The number of units in the binary optimizer are empirically selected as described in Table

Regarding the hyperparameters of the loss function, we finetune

3.3 Comparison with other supervised hashing methods

We compare the proposed method with other supervised hashing methods, i.e., SH-BDNN [7], ITQ-CCA [18], KSH [23], BRE [24], SDH [25]. In order to make fair comparisons for other methods, follow [7], we use the pre-trained network AlexNet to extract features from fully connected layer fc7 then use PCA to map 4096-dimensional features to lower dimensional space, i.e., a 800 dimensional space. The reduced features are used as inputs for compared methods.

The comparative results between methods are shown in Fig. 2. On MNIST dataset, SH-E2E achieves fair improvements over compared methods. The performance of SH-E2E is saturated when the code lengths are higher than 16, i.e, its mAP are 98.03%, 98.26% and 98.21% at code length 16, 24, 32, respectively. The similar results can be observed on the Cifar10 dataset. As shown in Figure 2(b), SH-E2E outperforms other supervised hashing methods with a fair margin. SH-E2E outperforms the most competitive SH-BDNN from 4% to 7.5% at different code lengths. On the SUN397 dataset, SH-E2E and the second best SH-BDNN achieve comparable results, while these two methods significantly outperform other methods.

3.4 Comparison with other end-to-end hashing networks

The results of [12, 26, 10, 28, 27] are directly cited from the corresponding papers. Although those works proposed approaches which simultaneously learn image features and binary codes by combining CNN layers and a binary quantization layer, they used approximation of sign function, i.e., [28] and  [12] use logistic function, while [10] uses tanh that may degrade the performance. Thanks to the new learning scheme for dealing with binary constraints and the effectiveness of proposed network architecture, the proposed SH-E2E outperforms other end-to-end methods with fair margins as observed in Table 2 and Table 3. Specifically, under Setting 1, the proposed SH-E2E and DHN [26] achieve comparable results while these two methods significantly outperform other methods. Under Setting 2, the proposed SH-E2E consistently outperforms the compared DRSCH [10] and DSRH [28] at all code lengths.

We propose a new deep network architecture which efficiently learns compact binary codes of images. The proposed network comprises three components, i.e., feature extractor, dimension reduction and binary code optimizer. These components are trained in an end-to-end framework. In addition, we also propose the new learning scheme which can cope with binary constraints and also allows the network to be trained with large scale datasets. The experimental results on three benchmarks show the improvements of the proposed method over the state-of-the-art supervised hashing methods.

This research is supported by the National Research Foundation Singapore under its AI Singapore Programme (Award number: AISG-100E-2018-005)