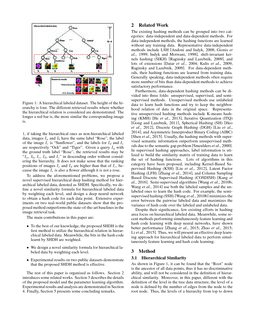 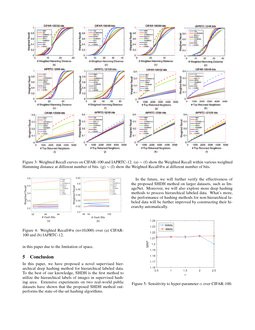 Due to its fast retrieval speed and low storage cost, similarity-preserving hashing has been widely used for approximate nearest neighbor (ANN) search [Arya et al.1998, Zhu et al.2016]. The central idea of hashing is to map the data points from the original feature space into binary codes in the Hamming space and preserve the pairwise similarities in the original space. With the binary-code representation, hashing enables constant or sub-linear time complexity for ANN search [Gong and Lazebnik2011, Zhang et al.2014]. Moreover, hashing can reduce the storage cost dramatically.

However, there are indeed lots of hierarchical labeled data, such as Imagenet

To address the aforementioned problem, we propose a novel supervised hierarchical deep hashing method for hierarchical labeled data, denoted as SHDH. Specifically, we define a novel similarity formula for hierarchical labeled data by weighting each layer, and design a deep convolutional neural network to obtain a hash code for each data point. Extensive experiments on several real-world public datasets show that the proposed method outperforms the state-of-the-art baselines in the image retrieval task.

It is reasonable that images have distinct similarity in different layers in a hierarchy. For example, in Figure 1, images Ia and Ic are similar in the third layer because they are both flower. However, they are dissimilar in the fourth layer because Ia belongs to rose but Ic belongs to sunflower. In the light of this, we have to define hierarchical similarity for two images in hierarchical labeled data.

For two images i and j, the similarity at the kth layer in the hierarchy is defined as:

where Ancestork(i) is the ancestor node of image i at the kth layer.

Equation (1) means that if images i and j share the common ancestor node in the kth layer, they are similar at this layer. On the contrary, they are dissimilar. For example, in Figure 1, the layer similarities between images Ia and Ic at different layers are: s1IaIc=0, s2IaIc=1, and s4IaIc=0.

Intuitively, the higher layer is more important, because we cannot reach the right descendant nodes if we choose a wrong ancestor. We thus have to consider the weight for each layer in a hierarchy.

The importance of kth

layer in a hierarchy whose height is K, can be estimated as:

Note that u1=0 because the root has no discriminative ability for all data points. It is easy to prove that uk>uk+1, which satisfies the demand where the influence of ancestor nodes is greater than that of descendant nodes. And ∑Kk=0uk=1.

Based upon the two definitions above, the final hierarchical similarity between images i and j can be calculated as below:

where K is the height of a hierarchy. Equation (3) guarantees that the more common hierarchical labels image pairs have, the more similar they are.

[Chatfield2014Return] is multipled in our work. Other CNN architectures can be used here such as AlexNet [Krizhevsky et al.2012], GoogleNet [SzegedyLJSRAEVR15]

. Since our work fouces on the influence of hierarchy, the CNN part is not the key point. The activation function used in this part is Rectified Linear Units (ReLu). More details can be referred in

Given a hierarchical labeled dataset X={xi}Ni=1 where xi

is the feature vector for data point

are the projection matrix and bias vector for the second layer, respectively. Similarly, the output for the

mth layer is: ϕmn=f(Wmϕm−1i+vm), and the output at the top layer of our network is:

where the mapping g:Rd→ReM is parameterized by {Wm,vm}Mm=1, 1≤m≤M. Now, we can perform hashing for the output hM at the top layer of the network to obtain binary codes as follows: hi=sgn(ϕMi). The procedure above is forward. To learn the parameters of our network, we have to define an objective function.

We define the similarity-preserving objective function:

Eq. (5) is used to make sure the similar images could share same hash code in each segment.

Second, to maximize the information from each hash bit, each bit should be a balanced partition of the dataset. Thus, we maximize the entropy, just as below:

We ultimately combine Eq. (5) and Eq. (6) to obtain the total objective function:

where α is hyper-parameter.

Assume that H=[h1T;h2T;...;hNT] is all the hash codes for N data points, and thus the objective function Eq. (2.2.1) could be transformed into the matrix form as below:

H=sgn(Wmϕm+vm), where sgn(⋅) denotes the elementwise sign function which returns 1 if the element is positive and returns −1 otherwise; Wm is the weight of the mth layer in our SHDH, vm is bias vector, and ϕm is the output of the mth layer. A∈RL×L is a diagonal matrix. It can be divided into K small diagonal matrix corresponding to Lk. The diagonal value of Ak is uk. Since the elements in H are discrete integer, J is not derivable. So, we relax it as ~H

from discrete to continuous by removing the sign function. Stochastic gradient descent (SGD)

where △ is calculated as below:

Then, the parameters are updated by using the following gradient descent algorithm until convergence:

where η is the step-size. In addition, we use the lookup table technology proposed in [Zhang et al.2015] to speed up the searching process. The outline of the proposed supervised hierarchical deep hashing (SHDH) is described in Algorithm 1.

We carried out experiments on two public benchmark datasets: CIFAR-100 dataset and IAPRTC-12 dataset. CIFAR-100 is an image dataset containing 60,000 colour images of 32×32 pixels. It has 100 classes and each class contains 600 images. The 100 classes in the CIFAR-100 are grouped into 20 superclasses. Each image has a “fine” label (the class which it belongs to) and a “coarse” label (the superclass which it belongs to). Thus, the height of the hierarchical labels with a “root” node in CIFAR-100 is three. The IAPRTC-12 dataset has 20,000 segmented images. Each image has been manually segmented, and the resultant regions have been annotated according to a predefined vocabulary of labels. The vocabulary is organized according to a hierarchy of concepts. The height of the hierarchical labels in IAPRTC-12 is seven. For both datasets, we randomly selected 90% as the training set and the left 10% as the test set. The hyper-parameter α in SHDH is empirically set as one.

We compared our methods with six state-of-the-art hashing methods, where four of them are supervised, the other two are unsupervised. The four supervised methods include DPSH [Li et al.2015, Li et al.2016], COSDISH [Kang et al.2016], LFH [Zhang et al.2014], and KSH [Liu et al.2012]. The two unsupervised methods are KMH [He et al.2013] and ITQ [Gong and Lazebnik2011]. For all of these six baselines, we employed the implementations provided by the original authors, and used the default parameters recommended by the corresponding papers. Moreover, to study the influence of hierarchical labels separately, we replaced the values in the similarity matrix for KSH and COSDISH by using hierarchical similarity to obtain two new methods, KSH+H and COSDISH+H. “H” means hierarchical version. ITQ and KMH cannot be modified because they are unsupervised. LFH and DPSH cannot be modified because their algorithm structures are not suitable to add hierarchical labeled information.

We resized all images to 32×32 pixels and directly used the raw images as input for the deep hashing methods including SHDH and DPSH. The left six methods use hand-crafted features. We represented each image in CIFAR-100 and IAPRTC-12 by a 512-D GIST vector.

Table 1 summarizes the comparative results of different hashing methods on the CIFAR-100 dataset. We have several observations from Table 1: (1) our SHDH outperforms the other supervised and unsupervised baselines for different code length. For example, comparing with the best competitor (DPSH), the results of our SHDH have a relative increase of 12.5% ∼ 18.4% on ACG, 10.7% ∼ 16.7% on DCG, and 8.7% ∼ 11.4% on NDCG; (2) the hierarchical semantic labels can improve the performance of hashing methods. For example, COSDISH+H and KSH+H perform respectively better than COSDISH and KSH, which means the inherent hierarchical information is valuable to improve hashing performance; (3) among all the supervised approaches, the deep learning based approaches (SHDH and DPSH) give relatively better results, and it confirms that the learnt representations by deep network from raw images are more effective than hand-crafted features to learn hash codes.

Figure 3 (a) ∼ (c) are the Weighted Recall curves for different methods over different weighted Hamming distance at 32, 48, and 64 bits, respectively, which shows our method has a consistent advantage over baselines. Figure 3 (g) ∼ (i) are the Weighted Recall results over top-n retrieved results, where n ranges from 1 to 5,000. Our approach also outperforms other state-of-the-art hashing methods. The Weighted Recall curves at different length of hash codes are also illustrated in Figure 4 (a). From the figure, our SHDH model performs better than baselines, especially when the code length increases. This is because when the code length increases, the learnt hash functions can increase the discriminative ability for hierarchical similarity among images.

Table 2 shows the performance comparison of different hashing methods over IAPRTC-12 dataset, and our SHDH performs better than other approaches regardless of the length of codes. Obviously, it can be found that all baselines cannot achieve optimal performance for hierarchical labeled data. Figure 3 (j) ∼ (l) are the Weighted Recall results over top-n returned neighbors, where n ranges from 1 to 5,000. These curves show a consistent advantage against baselines. Moreover, our SHDH provides the best performance at different code length, shown in Figure 4 (b).

Figure 5 shows the effect of the hyper-parameter α over CIFAR-100. We can find that SHDH is not sensitive to α. For example, SHDH can achieve good performance on both datasets with 0.5 ≤ α ≤ 2. We can also obtain similar conclusion over IAPRTC-12 dataset, and the figure is not included in this paper due to the limitation of space.