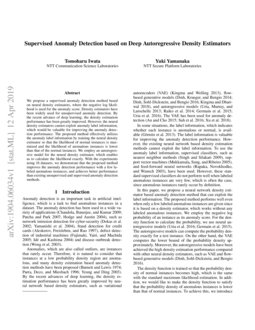 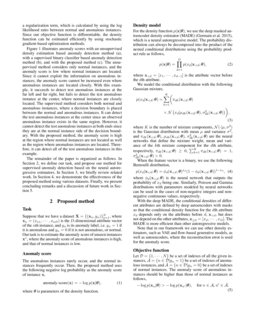 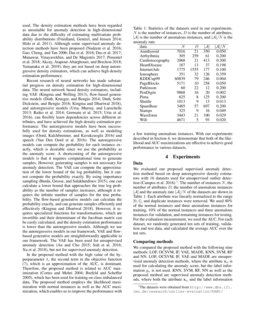 Use of an autoencoder (AE) as a normal model is a state-of-the-art techn...
Yuma Koizumi, et al. ∙

In recommendation systems, items are likely to be exposed to various use...
Ke Bai, et al. ∙

Anomaly detection is an important task in artificial intelligence, which is a task to find anomalous instances in a dataset. The anomaly detection has been used in a wide variety of applications

Anomalies, which are also called outliers, are instances that rarely occur. Therefore, it is natural to consider that instances at a low probability density region are anomalous, and many density estimation based anomaly detection methods have been proposed

. By the recent advances of deep learning, the density estimation performance has been greatly improved by neural network based density estimators, such as variational autoencoders (VAE)

In some situations, the label information, which indicates whether each instance is anomalous or normal, is available [Görnitz et al.2013]

The density function is trained so that the probability density of normal instances becomes high, which is the same with the standard maximum likelihood estimation. In addition, we would like to make the density function to satisfy that the probability density of anomalous instances is lower than that of normal instances. To achieve this, we introduce a regularization term, which is calculated by using the log likelihood ratio between normal and anomalous instances. Since our objective function is differentiable, the density function can be estimated efficiently by using stochastic gradient-based optimization methods.

The remainder of the paper is organized as follows. In Section 2, we define our task, and propose our method for supervised anomaly detection based on the neural autoregressive estimators. In Section 3, we briefly review related work. In Section 4, we demonstrate the effectiveness of the proposed method using various datasets. Finally, we present concluding remarks and a discussion of future work in Section 5.

The anomalous instances rarely occur, and the normal instances frequently occur. Then, the proposed method uses the following negative log probability as the anomaly score of instance x,

where θ is parameters of the density function.

For the density function p(x|θ), we use the deep masked autoencoder density estimator (MADE) [Germain et al.2015]

where x<d=[x1,⋯,xd−1] is the attribute vector before the dth attribute.

We model the conditional distribution with the following Gaussian mixture,

where K is the number of mixture components, N(⋅|μ,σ2)

is the Gaussian distribution with mean

When the feature vector is a binary, we use the following Bernoulli distribution,

where ϕd(x<d;θ) is the neural network that outputs the probability of xd

being one. Similarly, Poisson and Gamma distributions with parameters modeled by neural networks can be used in the cases of non-negative integers and non-negative continuous values, respectively.

Note that in our framework we can use other density estimators, such as VAE and flow-based generative models, as well as autoencoders, where the reconstruction error is used for the anomaly score.

In addition, the following log likelihood of the normal instances should be high,

since the anomaly score, which is defined by the negative log likelihood, of the normal instances should be low. Here, |⋅| represents the number of elements in the set.

is the hyperparameter. Figure

When there are no labeled anomalous instances or λ=0, the regularization term becomes zero, and the first term on the likelihood remains with the objective function, which is the same objective function with the standard density estimation. Therefore, the proposed method can be seen as a generalization of unsupervised density estimation based anomaly detection methods.

The regularization term can be seen as a stochastic version of the area under the receiver operating characteristic (ROC) curve (AUC) [Yan et al.2003], since the AUC is computed by

A number of unsupervised methods for anomaly detection, which is sometimes called outlier detection

have been used. The density estimation methods have been regarded as unsuitable for anomaly detection in high-dimensional data due to the difficulty of estimating multivariate probability distributions

We evaluated our proposed supervised anomaly detection method based on deep autoregressive density estimators with 16 datasets used for unsupervised outlier detection [Campos et al.2016] 111The datasets were obtained from http://www.dbs.ifi.lmu.de/research/outlier-evaluation/DAMI/. The number of instances N, the number of attributes D, the number of anomalous instances |A| and the anomaly rate |A|/N of the datasets are shown in Table 1. Each attribute was linearly normalized to the range [0,1], and duplicate instances were removed. We used 80% of the normal instances and three anomalous instances for training, 10% of the normal instances and three anomalous instances for validation, and remaining instances for testing. For the evaluation measurement, we used the AUC. For each dataset, we randomly generated ten sets of training, validation and test data, and calculated the average AUC over the ten sets.

xn is used for calculating the anomaly score, but the label information yn is not used. KNN, SVM, RF, NN as well as the proposed method are supervised anomaly detection methods, where both the attribute xn and the label information yn are used. The hyperparameters were selected based on the AUC score on the validation data for both of the unsupervised and supervised methods. We used the implementation of scikit-learn [Pedregosa et al.2011] with LOF, OCSVM, IF, KNN, SVM, RF and NN.

Settings of the proposed method

We have proposed a supervised anomaly detection method based on neural autoregressive models. With the proposed method, the neural autoregressive model is trained so that the likelihood of normal instances is maximized and the likelihood of anomalous instances is lower than that of normal instances. The proposed method can detect anomalies in the region where there are no normal instances as well as in the region where anomalous instances are located closely. We have experimentally confirmed the effectiveness of the proposed method using 16 datasets. Although our results have been encouraging to date, our approach can be further improved in a number of ways. First, we would like to extend our framework for semi-supervised setting [Blanchard, Lee, and Scott2010], where unlabeled instances as well as labeled anomalous and normal instances are given. Second, we plan to incorporate other neural density estimators including VAE to our framework.