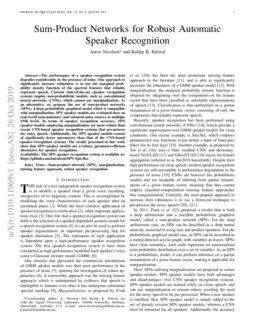 What can predictive speech coders learn from speaker recognizers?

One obstacle that prevented the commercial introduction of GMM speaker models was their poor performance in the presence of noise [7], spurring the investigation of robust approaches [8]. A noteworthy approach was the missing feature approach, which is underpinned by evidence that speech is intelligible to humans even after it has undergone substantial spectral masking [9]. Marginalisation, as proposed by Cook et al. [10], has been the most prominent missing feature approach in the literature [11], and is able to significantly increases the robustness of a GMM speaker model [12]

. With marginalisation, the marginal probability density function is obtained by integrating over the components of the feature vector that have been classified as unreliable representations of speech

[13]. Classification is thus performed on a partial instantiation of a given feature vector, consisting of only the components that reliably represent speech.

Recently, speaker recognition has been performed using convolutional neural networks (CNNs) [14], which provide a significant improvement over GMM speaker models for clean conditions. One recent example is SincNet, which employs parametrised sinc functions to pre-define a bank of band-pass filters for its first layer [15]. Another example, as proposed by Xie et al. [16], uses a ‘thin’ residual CNN, and dictionary-based NetVLAD [17] and GhostVLAD [18] layers for feature aggregation (referred to as Xie2019 henceforth). Despite their high performance on clean speech, modern speaker recognition systems are still susceptible to performance degradation in the presence of noise [19]. CNNs are however not probabilistic models and are incapable of inferring from partial instantiations of a given feature vector, meaning that they cannot employ classifier-compensation missing feature approaches like marginalisation. Currently, the most popular approach to increase their robustness is to use a front-end technique to pre-process the noisy speech [20, 21].

proposed a model that is both a deep architecture and a tractable probabilistic graphical model, called a sum-product network (SPN). For the deep architecture case, an SPN can be described as a deep neural network, restricted to using sum and product operators. For the probabilistic graphical model case, an SPN can be described as a rooted directed acyclic graph, with variables as leaves. SPNs have clear semantics; each node represents an unnormalised joint probability distribution over a set of variables. As an SPN is a probabilistic model, it can perform inference on a partial instantiation of a given feature vector, making it applicable for marginalisation.

SPN speaker models are evaluated here on a text-independent speaker recognition task against both GMM speaker models [24], SincNet [15], and Xie2019 [16]

as its front-end. Speaker recognition accuracy is used as the evaluation metric and is found for multiple conditions, including clean speech mixed with real-world non-stationary and coloured noise sources for multiple SNR levels. The paper is organised as follows: the proposed SPN speaker models are presented in Section

II; the experiment setup is described in Section III, including a description of each speaker model type; the results and discussion are presented in Section IV; conclusions are drawn in Section V.

A frequency domain representation is used as the feature vector for marginalisation, like the power spectral density (PSD) estimate of the short-time Fourier transform (STFT), or the spectral sub-band energies of the PSD estimate. In this work, we use the log-spectral sub-band energies (LSSEs) of a clean speech frame as the feature vector for the SPN and GMM speaker models. The LSSEs are computed from the single-sided PSD estimate

111For convenience, the frame index is ommited from the notation.:

specifies an unnormalised joint distribution over a set of random variables,

X=(X1,X2,...,XB)⊤, where in this case, X is the feature vector of LSSEs for a frame of clean speech. An observation of X is denoted here by x=(x1,x2,...,xB)⊤. Hence, the SPN, S, for speaker class C is a function of the observed feature vector: S(x|C), where the value of the SPN is given by its root. An SPN consists of multiple layers of sum and product nodes, with distributions as leaves. The multivariate distribution of the ith leaf is over a subset of the variables: Xi⊆X

, and is assumed to be normally distributed:

Xi∼N(μ,Σ|i,C), with mean μ, and diagonal covariance Σ. The probability density function for the ith leaf is given by

where D⊆(1,2,...,B)⊤, and indicates the random variable indices for Xi. An SPN over two variables with univariate Gaussian leaves is shown in Figure 1.

For marginalisation, the unreliable components are treated as missing. Thus, the bounds are taken from [−∞,∞], and the integral in Equation 3 reduces to unity. This gives the marginal probability density function for the leaf: N(yri|i,C). When all of the components of yi are unreliable, it is treated as a vector with no instantiated components: N(yri=∅|i,C)=1.

The feature vectors for the GMM and SPN speaker models were computed using the following hyperparameters. The Hamming window function was used for analysis, with a frame length of 32 ms (512 discrete-time samples) and a frame shift of 16 ms (256 discrete-time samples). The 257-point single-sided PSD estimate for a frame included both the DC and Nyquist frequency component. The LSSEs of a PSD estimate were computed using 26 triangular-shaped critical band filters spaced uniformly on the mel-scale.

Here, the reliability of a spectral component is determined by its a priori SNR, as in [26]. A component with an a priori SNR of greater than 0 dB is classified as reliable [27]. Deep Xi from [28] is used here as the a priori

SNR estimator. It is a deep learning approach to

GMM: For each speaker, a GMM consisting of 48 diagonal covariance clusters was trained on the training set using the expectation-maximisation algorithm [32]

, and the k-means++ algorithm for parameter initialisation

SincNet: [15] is available at: https://github.com/mravanelli/SincNet, and was trained using the training set.

Xie2019: [16] is available at: https://github.com/WeidiXie/VGG-Speaker-Recognition, and was trained using the training set with an input spectrogram size of 1 second.

SincNet + IRM & Xie2019 + IRM: The LSTM-IRM estimator from [25] was used as the front-end for SincNet and Xie2019. The training data and configuration from [34] was used specifically.

SPN: Each speaker was modelled using an SPN with univariate Gaussian leaves. The SPFlow library was used to implement the SPN speaker models [35]. A variant of the LearnSPN algorithm [36] that partitions and clusters variables using the Hirschfeld-Gebelein-Rényi maximum correlation coefficient [37] was used as the structure learning algorithm. The minimum number of instances to split was set to 50, and the threshold of significance was set to 0.3 for the structure learning algorithm.

. Additionally, it is common to use backpropagation to fine-tune the weights of an SPN (as used to train CNNs), something that was not carried out here. With a better structure learning algorithm, and the use of a weight learning algorithm, the joint distribution of a speaker could perhaps be more effectively modelled. This may improve the performance of SPN speaker models at higher SNR levels. SPN acoustic models utilising marginalisation should also be investigated for robust automatic speech recognition (ASR), and for robust speaker verification, where the universal background model framework could be employed

Here, sum-product networks (SPNs) are employed as robust speaker models. They are evaluated on real-world non-stationary and coloured noise sources at multiple SNR levels. When marginalisation is used, SPN speaker models are more robust than current speaker recognition systems that employ significantly more parameters and pre-processing techniques. With the development of better structure and weight learning algorithms, SPNs are predicted to have a bright future not only for robust speaker recognition, but also for robust ASR.