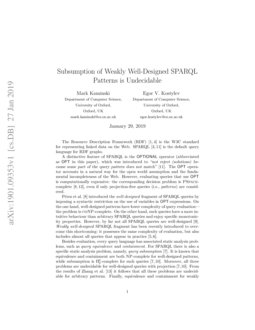 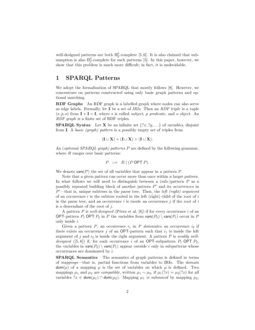 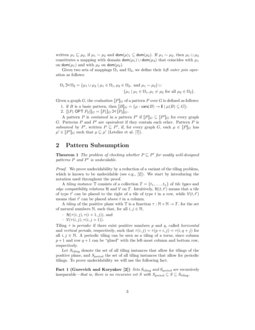 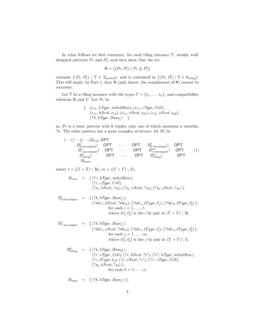 We adopt the formalisation of SPARQL that mostly follows [8]. However, we concentrate on patterns constructed using only basic graph patterns and optional matching.

RDF Graphs   An RDF graph is a labelled graph where nodes can also serve as edge labels. Formally, let I be a set of IRIs. Then an RDF triple is a tuple (s,p,o) from I×I×I, where s is called subject, p predicate, and o object. An RDF graph is a finite set of RDF triples.

SPARQL Syntax   Let X be an infinite set {?x,?y,…} of variables, disjoint from I. A basic (graph) pattern is a possibly empty set of triples from

An (optional SPARQL graph) patterns P are defined by the following grammar, where B ranges over basic patterns:

We denote vars(P) the set of all variables that appear in a pattern P.

A pattern P is well-designed (Pérez et al. [8]) if for every occurrence i of an OPT-pattern P1OPTP2 in P the variables from vars(P2)∖vars(P1) occur in P only inside i.

SPARQL Semantics   The semantics of graph patterns is defined in terms of mappings—that is, partial functions from variables to IRIs. The domain dom(μ) of a mapping μ is the set of variables on which μ is defined. Two mappings μ1 and μ2 are compatible, written μ1∼μ2, if μ1(?x)=μ2(?x) for all variables ?x∈dom(μ1)∩dom(μ2). Mapping μ1 is subsumed by mapping μ2, written μ1⊑μ2, if μ1∼μ2 and dom(μ)1⊆dom(μ2). If μ1∼μ2, then μ1∪μ2 constitutes a mapping with domain dom(μ1)∪dom(μ2) that coincides with μ1 on dom(μ1) and with μ2 on dom(μ2).

Given two sets of mappings Ω1 and Ω2, we define their left outer join operation as follows:

Given a graph G, the evaluation ⟦P⟧G of a pattern P over G is defined as follows:

The problem of checking whether P⊑P′ for weakly well-designed patterns P and P′ is undecidable.

Proof.  We prove undecidability by a reduction of a variant of the tiling problem, which is known to be undecidable (see e.g., [2]). We start by introducing the notation used throughout the proof.

A tiling of the positive plane with T is a function τ:N×N→T, for the set of natural numbers N, such that, for all i,j∈N,

Tiling τ is periodic if there exist positive numbers p and q, called horizontal and vertical periods, respectively, such that τ(i,j)=τ(p+i,j)=τ(i,q+j) for all i,j∈N. A periodic tiling can be seen as a tiling of a torus, since column p+1 and row q+1 can be “glued” with the left-most column and bottom row, respectively.

In what follows we first construct, for each tiling instance T, weakly well-designed patterns PT and P′T, and then show that the set

contains {(PT,P′T)∣T∈Speriod}, and is contained in {(PT,P′T)∣T∈Stiling% }. This will imply, by Fact 1, that Φ (and, hence, the complement of Φ) cannot be recursive.

Let T be a tiling instance with tile types T={t1,…,tn}, and compatibility relations H and V. Let PT be

so, PT is a basic pattern with 6 triples, only one of which mentions a variable, ?b. The other pattern has a more complex structure: let P′T be

Having the construction complete, next we show that PT⋢P′T for any tiling instance T in Speriod. In particular, on the base of a witnessing periodic tiling we build a graph G and a mapping μ such that μ∈⟦PT⟧G, but there is no μ′∈⟦P′T⟧G such that μ⊑μ′. Assume that T has tile types T={t1,…,tn}, compatibility relations H and V, and periodic tiling τ with the horizontal and vertical periods p≥2 and q≥2, respectively. Let G consist of the triples

as well as the triples

Since the tiling agrees with H and V, none of basic patterns Bih-incompat and Bjv-incompat has a match in G, because each of them requires a pair of horizontally or vertically adjacent cells with incompatible tile types. So, none of the mappings in ⟦Broot⟧G are extendable to any of Bih-incompat and Bjv-incompat. However, each mapping μ′root∈⟦Broot⟧G extends to Bktiling such that tk=τ(i,j) with μ′root(?c)=cij. In particular, this extension μ′ sends ?b to b⋢, which implies that μ⋢μ′. Therefore, G and μ are a witness for the required PT⋢P′T.

We continue by showing that PT⋢P′T implies T∈Stiling for any tiling instance T. In particular, on the base of a graph G and mapping μ witnessing PT⋢P′T we construct a tiling τ of the positive plane with T. Assume that T has tile types T={t1,…,tn} as well as compatibility relations H and V. Since μ∈⟦PT⟧G, graph G contains triples

for some IRI c′12. Just for uniformity, assume that c′12=c12. Therefore, ⟦Broot⟧G contains a mapping μ′′root sending ?r to c12 (and all other variables same as μ′root). Reasoning in the same way as for μ′root, we obtain that G has triples

for some IRI c13. Continuing like this, we conclude that G contains

for all j≥1 (note that many of these c1j coincide, because G is finite).

For each j≥1, ⟦Broot⟧G contains a mapping sending ?c to c1j. As before, this mapping is extendable in G to Bktiling for some k. In particular, it is extendable to the triples (?c,tType,tk), (?c,vNext,?c′), and (?c′,cType,Cell)—that is, G contains triples

for some IRI c2j (again, if j is 1 or 2, then we assume that c2j is the same as in PT for uniformity). Similarly as before, ⟦Broot⟧G contains a mapping sending ?c to c2j, from which we have that G has triples

for some c3j and k. Repeating this process, we conclude that G contains, for any i≥1 and j≥1,

We need to show that τ is indeed a tiling with T. To this end, we first note that G contains the triple (cij,hNext,ci(j+1)) for all i and j: we already showed this fact for i=1, and for all other i it can be proved very similarly to the reasoning above, based on the fact that ⟦Broot⟧G contains a mapping sending ?s1, ?s2, ?s3, and ?s4 to c(i−1)j, c(i−1)(j+1), cij, and ci(j+1), respectively. Now, to see that τ is a tiling with T we just note that if there exist horizontally or vertically adjacent tiles that do not agree with H or V, then there exists i or j such that Bih-incompat or Bjv-incompat is matched in G; since this basic patterns does not have any variables in common with Broot, any mapping in ⟦Broot⟧G is then extendable to this BGP and hence ⟦P′T⟧G contains a mapping sending ?b to b⊑, contradicting the fact that graph G and mapping μ are a witness for non-subsumption. □