Progressive Neural Network Learning is a class of algorithms that incrementally construct the network's topology and optimize its parameters based on the training data. While this approach exempts the users from the manual task of designing and validating multiple network topologies, it often requires an enormous number of computations. In this paper, we propose to speed up this process by exploiting subsets of training data at each incremental training step. Three different sampling strategies for selecting the training samples according to different criteria are proposed and evaluated. We also propose to perform online hyperparameter selection during the network progression, which further reduces the overall training time. Experimental results in object, scene and face recognition problems demonstrate that the proposed approach speeds up the optimization procedure considerably while operating on par with the baseline approach exploiting the entire training set throughout the training process. 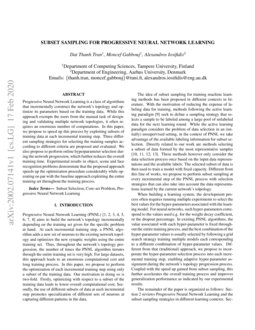 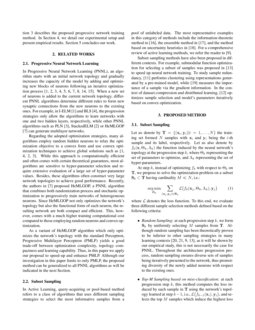 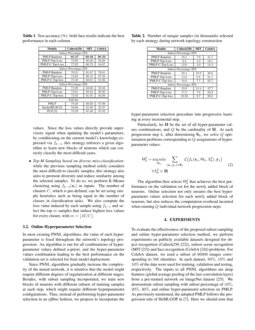 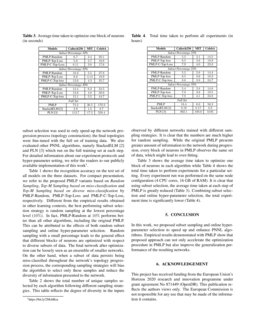 DCNNs on a Diet: Sampling Strategies for Reducing the Training Set Size

Selecting an optimal set of icons is a crucial step in the pipeline of v...
Manuel Lagunas, et al. ∙

aims to build the network’s topology incrementally depending on the training set given for the specific problem at hand. At each incremental training step, a PNNL algorithm adds a new set of neurons to the existing network topology and optimizes the new synaptic weights using the entire training set. Thus, throughout the network’s topology progression, the number of times the PNNL algorithm iterates through the entire training set is very high. For large datasets, this approach leads to an enormous computational cost and long training process. In this paper, we propose to perform the optimization of each incremental training step using only a subset of the training data. Our motivation in doing so is two-fold. Firstly, optimizing with respect to a subset of the training data leads to lower overall computational cost; Secondly, the use of different subsets of data at each incremental step promotes specialization of different sets of neurons at capturing different patterns in the data.

The idea of subset sampling for training machine learning methods has been proposed in different contexts in literature. With the motivation of reducing the expense of labeling data for training, methods following the active learning paradigm

[15] seek to define a sampling strategy that selects a sample to be labeled among a large pool of unlabeled data for the next learning round. While the active learning paradigm considers the problem of data selection in an (initially) unsupervised setting, in the context of PNNL we take advantage of the available labeling information for subset selection. Directly related to our work are methods selecting a subset of data formed by the most representative samples [14, 2, 16, 1]. These methods however only consider the data selection process once based on the input data representations and the available labels. The selected subset of data is then used to train a model with fixed capacity. Different from this line of works, we propose to perform subset sampling at every incremental step of the PNNL process with selection strategies that can also take into account the data representations learned by the current network’s tolpology.

When building a learning system, the development process often requires running multiple experiments to select the best values for the hyper-parameters associated with the learning model. For neural networks, such hyper-parameters correspond to the values used e.g. for the weight decay coefficient, or the dropout percentage. In existing PNNL algorithms, the value associated with each hyper-parameter is fixed throughout the entire training process, and the best combination of the hyper-parameter values is usually selected by following a grid search strategy training multiple models each corresponding to a different combination of hyper-parameter values. Different from that (traditional) approach, we propose to incorporate the hyper-parameter selection process into each incremental training step, enabling adaptive hyper-parameter assignment during the network’s topology progression process. Coupled with the speed up gained from subset sampling, this further accelerates the overall training process and improves generalization performance as indicated by our experimental results.

In Progressive Neural Network Learning (PNNL), an algorithm starts with an initial network topology and gradually increases the capacity of the model by adding and optimizing new blocks of neurons following an iterative optimization process [8, 25, 3, 4, 9, 21, 22, 19, 20, 23]. When a new set of neurons is added to the current network topology, different PNNL algorithms determine different rules to form new synaptic connections from the new neurons to the existing ones. For example, in I-ELM [8] and BLS [4], the progression strategies only allow the algorithms to learn networks with one and two hidden layers, respectively, while other PNNL algorithms such as PLN [3], StackedELM [25] or HeMLGOP [22] can generate multilayer networks.

Regarding the adopted optimization strategies, many algorithms employ random hidden neurons to relax the optimization objective to a convex form and use convex optimization techniques to achieve global solutions such as [8, 4, 25, 3]. While this approach is computationally efficient and often comes with certain theoretical guarantees, most algorithms are sensitive to hyper-parameter selection and require extensive evaluation of a large set of hyper-parameter values. Besides, these algorithms often construct very large network topologies to achieve good performance. Recently, the authors in [22] proposed HeMLGOP, a PNNL algorithm that combines both randomization process and stochastic optimization to progressively train networks of heterogeneous neurons. Since HeMLGOP not only optimizes the network’s topology but also the functional form of each neuron, the resulting network are both compact and efficient. This, however, comes with a much higher training computational cost compared to those employing random neurons and convex optimization.

As a variant of HeMLGOP algorithm which only optimizes the network’s topology with the standard Perceptron, Progressive Multilayer Perceptron (PMLP) yields a good trade-off between optimization complexity, topology compactness and learning capability. Thus, in this paper we apply our proposal to speed-up and enhance PMLP. Although our investigation in this paper limits to only PMLP, the proposed method can be generalized to all PNNL algorithms as will be indicated in the next Section.

In Active Learning, query-acquiring or pool-based method refers to a class of algorithms that uses different sampling strategies to select the most informative samples from a pool of unlabeled data. The most representative examples in this category of methods include the information-theoretic method in [11], the ensemble method in [12]

, and the method based on uncertainty heuristics in

[18]. For a comprehensive review of active learning methods, we refer the reader to [15].

Subset sampling methods have also been proposed in different contexts. For example, submodular function optimization for selecting a subset of samples was proposed in [1] to speed up neural network training. To study sample redundancy, [2] performs clustering using representations generated by a pre-trained model, while [24] measures the importance of a sample via the gradient information. In the context of dataset compression and distributed learning, [16] optimizes sample selection and model’s parameters iteratively based on convex optimization.

At step k, instead of optimizing fk with respect to Θk on T, we propose to solve the optimization problem on a subset Sk⊂T having cardinality M≪N, i.e.:

denotes the loss function. To this end, we evaluate three different sample selection methods defined based on the following criteria:

Since PNNL algorithms gradually increase the complexity of the neural network, it is intuitive that the model might require different degrees of regularization at different stages. Besides, with subset sampling incorporated, we train new blocks of neurons with different subsets of training samples at each step, which might require different hyperparameter configurations. Thus, instead of performing hyper-parameter selection in an offline fashion, we propose to incorporate the hyper-parameter selection procedure into progressive learning at every incremental step.

To evaluate the effectiveness of the proposed subset sampling and online hyper-parameter selection method, we perform experiments on publicly available datasets designed for object recognition (Caltech256 [7]

of the data were used for training, validation and testing, respectively. The inputs to all PNNL algorithms are deep features (global average pooling of the last convolution layer) from a pre-trained network on ImageNet dataset

[17]. We demonstrate subset sampling with subset percentage of 10%, 20%, 30%, and online hyper-parameter selection on PMLP. As previously mentioned, the adopted PMLP follows the progression rule of HeMLGOP in [22]. Here we should note that subset selection was used to only speed-up the network progression process (topology construction); the final topologies were fine-tuned with the full set of training data. We also evaluated other PNNL algorithms, namely StackedELM [25] and PLN [3] which run on the full training set at each step. For detailed information about our experiment protocols and hyper-parameter setting, we refer the readers to our publicly available implementation of this work111https://bit.ly/2MshRza.

Table 1 shows the recognition accuracy on the test set of all models on the three datasets. For compact presentation, we refer to the proposed PMLP variants based on Random Sampling, Top-M Sampling based on miss-classification and Top-M Sampling based on diverse miss-classification by PMLP-Random, PMLP-Top-Loss and PMLP-C-Top-Loss, respectively. Different from the empirical results obtained in other learning contexts, the best performing subset selection strategy is random sampling at the lowest percentage level (10%). In fact, PMLP-Random at 10% performs better than all other algorithms, including the original PMLP. This can be attributed to the effects of both random subset sampling and online hyper-parameter selection. Random sampling with a small percentage leads to the general effect that different blocks of neurons are optimized with respect to diverse subsets of data. The final network after optimization can be loosely seen as an ensemble of smaller networks. On the other hand, when a subset of data persists being miss-classified throughout the network’s topology progression process, the corresponding sampling strategies will bias the algorithm to select only these samples and reduce the diversity of information presented to the network.

Table 2 shows the total number of unique samples selected by each algorithm following different sampling strategies. This table reflects the degree of diversity in the inputs observed by different networks trained with different sampling strategies. It is clear that the numbers are much higher for random sampling. While the original PMLP presents greater amount of information to the network during progression, every block of neurons in PMLP observes the same set of data, which might lead to over-fitting.

Table 3 shows the average time taken to optimize one block of neurons in each algorithm while Table 4 shows the total time taken to perform experiments for a particular setting. Every experiment run was performed on the same node configuration (4 CPU cores, 16 GB of RAM). It is clear that using subset selection, the average time taken at each step of PMLP is greatly reduced (Table 3). Combining subset selection and online hyper-parameter selection, the total experiment time is significantly lower (Table 4).

In this work, we proposed subset sampling and online hyper-parameter selection to speed up and enhance PNNL algorithms. Empirical results demonstrated with PMLP show that proposed approach can not only accelerate the optimization procedure in PMLP but also improve the generalization performance of the resulting networks.

This project has received funding from the European Union’s Horizon 2020 research and innovation programme under grant agreement No 871449 (OpenDR). This publication reflects the authors’ views only. The European Commission is not responsible for any use that may be made of the information it contains.