We design a sublinear-time approximation algorithm for quadratic function minimization problems with a better error bound than the previous algorithm by Hayashi and Yoshida (NIPS'16). Our approximation algorithm can be modified to handle the case where the minimization is done over a sphere. The analysis of our algorithms is obtained by combining results from graph limit theory, along with a novel spectral decomposition of matrices. Specifically, we prove that a matrix A can be decomposed into a structured part and a pseudorandom part, where the structured part is a block matrix with a polylogarithmic number of blocks, such that in each block all the entries are the same, and the pseudorandom part has a small spectral norm, achieving better error bound than the existing decomposition theorem of Frieze and Kannan (FOCS'96). As an additional application of the decomposition theorem, we give a sublinear-time approximation algorithm for computing the top singular values of a matrix. 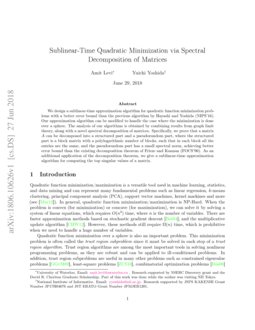 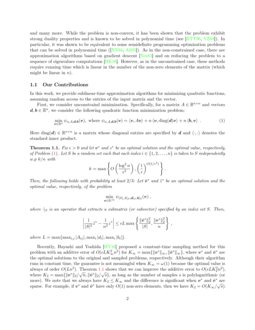 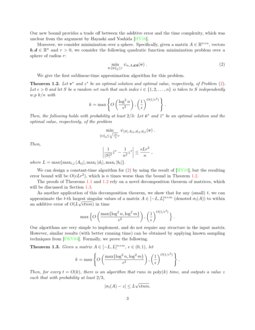 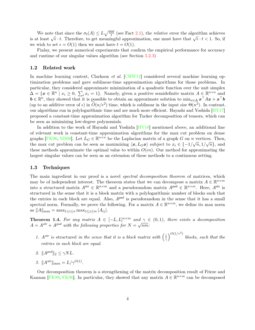 A Spectral Approach to Network Design

We study the problem of approximating the eigenspectrum of a symmetric m...
Rajarshi Bhattacharjee, et al. ∙

Quadratic function minimization/maximization is a versatile tool used in machine learning, statistics, and data mining and can represent many fundamental problems such as linear regression,

[Mur12]). In general, quadratic function minimization/maximization is NP-Hard. When the problem is convex (for minimization) or concave (for maximization), we can solve it by solving a system of linear equations, which requires O(n3) time, where n

is the number of variables. There are faster approximation methods based on stochastic gradient descent

[Bot04], and the multiplicative update algorithm [CHW12]. However, these methods still require Ω(n) time, which is prohibitive when we need to handle a huge number of variables.

Quadratic function minimization over a sphere is also an important problem. This minimization problem is often called the trust region subproblem since it must be solved in each step of a trust region algorithm

. Trust region algorithms are among the most important tools in solving nonlinear programming problems, as they are robust and can be applied to ill-conditioned problems. In addition, trust region subproblems are useful in many other problems such as constrained eigenvalue problems

[Bus06] and many more. While the problem is non-convex, it has been shown that the problem exhibit strong duality properties and is known to be solved in polynomial time (see [BTT96, YZ03]). In particular, it was shown to be equivalent to some semidefinite programming optimization problems that can be solved in polynomial time ([NN94, Ali95]). As in the non-constrained case, there are approximation algorithms based on gradient descent [Nes83] and on reducing the problem to a sequence of eigenvalues computations [HK16]. However, as in the unconstrained case, these methods require running time which is linear in the number of the non-zero elements of the matrix (which might be linear in n).

In this work, we provide sublinear-time approximation algorithms for minimizing quadratic functions, assuming random access to the entries of the input matrix and the vector.

Here diag(d)∈Rn×n is a matrix whose diagonal entries are specified by d and ⟨⋅,⋅⟩ denotes the standard inner product.

Fix ϵ>0 and let v∗ and z∗ be an optimal solution and the optimal value, respectively, of Problem (1). Let S be a random set such that each index i∈{1,2,…,n} is taken to S independently w.p k/n with

Then, the following holds with probability at least

2/3: Let ~v∗ and ~z∗ be an optimal solution and the optimal value, respectively, of the problem

where ⋅|S is an operator that extracts a submatrix (or subvector) specified by an index set S. Then,

Recently, Hayashi and Yoshida [HY16] proposed a constant-time sampling method for this problem with an additive error of O(ϵLK2∞n2) for K∞=max{∥v∗∥∞,∥~v∗∥∞}, where v∗ and ~v∗ are the optimal solutions to the original and sampled problems, respectively. Although their algorithm runs in constant time, the guarantee is not meaningful when K∞=ω(1) because the optimal value is always of order O(Ln2). Theorem 1.1 shows that we can improve the additive error to O(ϵLK22n2), where K2=max{∥v∗∥2/√n,∥~v∗∥2/√s}, as long as the number of samples s is polylogarithmic (or more). We note that we always have K2≤K∞ and the difference is significant when v∗ and ~v∗ are sparse. For example, if v∗ and ~v∗ have only O(1) non-zero elements, then we have K2=O(K∞/√s). Our new bound provides a trade off between the additive error and the time complexity, which was unclear from the argument by Hayashi and Yoshida [HY16].

We give the first sublinear-time approximation algorithm for this problem.

Let v∗ and z∗ be an optimal solution and optimal value, respectively, of Problem (2). Let ϵ>0 and let S be a random set such that each index i∈{1,2,…,n} is taken to S independently w.p k/n with

Then, the following holds with probability at least 2/3: Let ~v∗ and ~z∗ be an optimal solution and the optimal value, respectively, of the problem

We can design a constant-time algorithm for (2) by using the result of [HY16], but the resulting error bound will be O(ϵLr2), which is n times worse than the bound in Theorem 1.2.

The proofs of Theorems 1.1 and 1.2 rely on a novel decomposition theorem of matrices, which will be discussed in Section 1.3.

As another application of this decomposition theorem, we show that for any (small) t, we can approximate the t-th largest singular values of a matrix A∈[−L,L]n×m (denoted σt(A)) to within an additive error of O(L√ϵtnm) in time

Our algorithms are very simple to implement, and do not require any structure in the input matrix. However, similar results (with better running time) can be obtained by applying known sampling techniques from [FKV04]. Formally, we prove the following.

Then, for every t=O(k), there is an algorithm that runs in poly(k) time, and outputs a value z such that with probability at least 2/3,

We note that since the σt(A)≤L√nmt (see Fact 2.1), the relative error the algorithm achieves is at least √ϵ⋅t. Therefore, to get meaningful approximation, one must have that √ϵ⋅t<1. So, if we wish to set ϵ=O(1) then we must have t=O(1).

Finlay, we present numerical experiments that confirm the empirical performance for accuracy and runtime of our singular values algorithm (see Section 5.2.3)

In machine learning context, Clarkson et al. [CHW12] considered several machine learning optimization problems and gave sublinear-time approximation algorithms for those problems. In particular, they considered approximate minimization of a quadratic function over the unit simplex Δ={x∈Rn∣xi≥0,∑ixi=1}. Namely, given a positive semidefinite matrix A∈Rn×n and b∈Rn, they showed that it is possible to obtain an approximate solution to minx∈Δx⊤Ax+x⊤b (up to an additive error of ϵ) in ˜O(n/ϵ2) time, which is sublinear in the input size Θ(n2). In contrast, our algorithms run in polylogarithmic time and are much more efficient. Hayashi and Yoshida [HY17]

proposed a constant-time approximation algorithm for Tucker decomposition of tensors, which can be seen as minimizing low-degree polynomials.

In addition to the work of Hayashi and Yoshida [HY16] mentioned above, an additional line of relevant work is constant-time approximation algorithms for the max cut problem on dense graphs [FK96, MS08]. Let LG∈Rn×n be the Laplacian matrix of a graph G on n vertices. Then, the max cut problem can be seen as maximizing ⟨x,LGx⟩ subject to xi∈{−1/√n,1/√n}, and these methods approximate the optimal value to within O(ϵn). Our method for approximating the largest singular values can be seen as an extension of these methods to a continuous setting.

The main ingredient in our proof is a novel spectral decomposition theorem of matrices, which may be of independent interest. The theorem states that we can decompose a matrix A∈Rn×m into a structured matrix Astr∈Rn×m and a pseudorandom matrix Apsd∈Rn×m. Here, Astr is structured in the sense that it is a block matrix with a polylogarithmic number of blocks such that the entries in each block are equal. Also, Apsd is pseudorandom in the sense that it has a small spectral norm. Formally, we prove the following. For a matrix A∈Rn×m, we define its max norm as ∥A∥max=max1≤i≤nmax1≤j≤m|Aij|.

For any matrix A∈[−L,L]n×m and γ∈(0,1), there exists a decomposition A=Astr+Apsd with the following properties for N=√nm:

Our decomposition theorem is a strengthening of the matrix decomposition result of Frieze and Kannan [FK99, FK96]. In particular, they showed that any matrix A∈Rn×m can be decomposed to D1+⋯+Ds+W for s=O(1/γ2), where the matrices Di are block matrices and ∥W∥C≤γnm∥A∥max. Here, ∥W∥C is the cut norm, which is defined as

By using a result of Nikiforov [Nik09] that ∥W∥2=O(√nm⋅∥W∥max⋅∥W∥C) and the fact that the Frieze-Kannan result implies ∥W∥max≤√s∥A∥max, we get that ∥W∥2=O(nm⋅∥A∥max), which is too loose, and thus insufficient for our applications.

Given our decomposition theorem, we can conclude the following. When approximating (1) and (2), we can disregard the pseudorandom part Apsd. This will not affect our approximation by much, since Apsd has a small spectral norm. In addition, as Astr consists of a polylogarithmic number of blocks, such that the entries in each block are equal, we can hit all the blocks by sampling a polylogarithmic number of indices. Hence, we can expect that A|S is a good approximation to A. To formally define the distance between A and A|S and to show it is small, we exploit graph limit theory, initiated by Lovász and Szegedy [LS06] (refer to [Lov12] for a book).

In addition, we state the following fact regarding the singular values.

In this section we will prove the following decomposition theorem.

For any matrix A∈[−L,L]n×m and γ∈(0,1), there exists a decomposition A=Astr+Apsd with the following properties for N=√nm:

The above theorem will serve as a central tool in the analysis of our algorithms. The fact that Astr is a block matrix with polylogarithmic number of blocks, such that the entries in each block are equal, implies that by using polylogarithmic number of samples, we can query (with high probability) an entry from each of the blocks. In addition, the fact that Apsd has a small spectral norm allows us to disregard it, which only paying a small cost in the error of our approximation.

In order to prove the theorem, we introduce the following definition, two lemmas and a claim.

We say that a partition Q is a refinement of a partition P={V1,…,Vp}, if Q is obtained from P, by splitting some sets Vi into one or more parts.

In order to prove Lemma 3.3, we will need to prove the following.

Proof:   Assume that A has s singular values such that σℓ≥γNL. For any ℓ∈[s], let Mℓ=σℓuℓ(vℓ)⊤, and let B denote ∑ℓ:σℓ<γNLσℓuℓ(vℓ)⊤. Then, we can write A as,

Let cAj denote the j-th column of the matrix A. So, cAj=cM1j+⋯+cMsj+cBj. For any ℓ∈[s], cMℓj is perpendicular to cBj and all {cMtj}t such that t≠ℓ, and thus,

Let rAi denote the i-th row of the matrix A. Then similarly, we have ∥rAi∥2≥σℓ|uℓi|, and it follows that ∥cAj∥2∥rAi∥2≥σℓβℓij.

By the fact that s≤1γ2, we get that ∥A′∥max≤Lγ3, which concludes the proof.

With this lemma at hand, we are ready to prove Lemma 3.3.

where σ1≥⋯≥σmin{n,m}≥0 are the singular values of A and u1,…,umin{n,m}∈Rn and v1,…,vmin{n,m}∈Rm are the corresponding left and right singular vectors. If we let A′ be such that

Next we show the existence of Astr, which is a block matrix (with O((1γ10)3/γ2) blocks), such that Astr has the same value on every block. We construct Astr as follows.

Next, let ΣR=⋃ℓ:σℓ≥γNLΣℓR and let PR be a partition of [n]∖ΣR that refines all {PℓR,t∣PℓR,t≠∅} for which ℓ is such that σℓ≥γNL.

Next, we have that

We analyze each of these terms separately. First, note that

Next, we have that,

Combining all the three terms and setting ϵ=γ8 gives,

Therefore, we get that,

We are left with bounding the max norm of Astr.

Given a matrix A∈[−L,L]n×m and γ∈(0,1), let Astr∈Rn×m be the block approximation matrix defined above. Then, ∥Astr∥max≤2Lγ11

where the last inequality uses (3).