Subgraph densities in a surface

Given a fixed graph H that embeds in a surface Σ, what is the maximum number of copies of H in an n-vertex graph G that embeds in Σ? We show that the answer is Θ(n^f(H)), where f(H) is a graph invariant called the `flap-number' of H, which is independent of Σ. This simultaneously answers two open problems posed by Eppstein (1993). When H is a complete graph we give more precise answers. 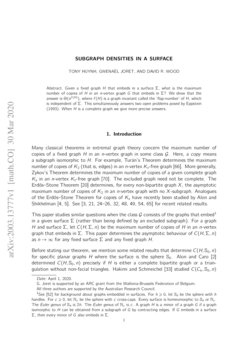 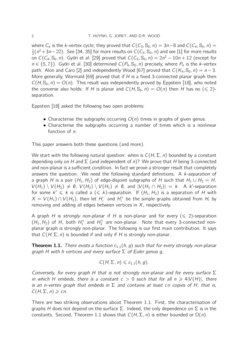 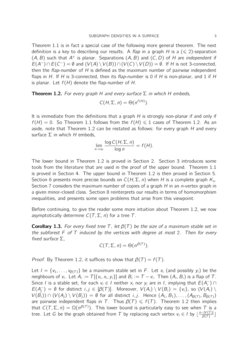 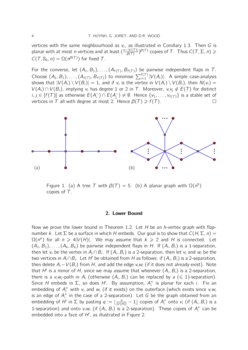 This paper studies similar questions when the class G consists of the graphs that embed111See [52] for background about graphs embedded in surfaces. For h⩾0, let S_h be the sphere with h handles. For c⩾0, let N_c be the sphere with c cross-caps. Every surface is homeomorphic to S_h or N_c. The Euler genus of S_h is 2h. The Euler genus of N_c is c. A graph H is a minor of a graph G if a graph isomorphic to H can be obtained from a subgraph of G by contracting edges. If G embeds in a surface Σ, then every minor of G also embeds in Σ. in a given surface Σ (rather than being defined by an excluded subgraph). For a graph H and surface Σ, let C(H,Σ,n) be the maximum number of copies of H in an n-vertex graph that embeds in Σ. This paper determines the asymptotic behaviour of C(H,Σ,n) as n→∞ for any fixed surface Σ and any fixed graph H.

This paper answers both these questions (and more).

We start with the following natural question: when is C(H,Σ,n) bounded by a constant depending only on H and Σ (and independent of n)? We prove that H being 3-connected and non-planar is a sufficient condition. In fact we prove a stronger result that completely answers the question. We need the following standard definitions. A k-separation of a graph H is a pair (H_1,H_2) of edge-disjoint subgraphs of H such that H_1∪H_2=H, V(H_1)∖V(H_2)≠∅, V(H_2)∖V(H_1)≠∅, and |V(H_1∩H_2)|=k. A k′-separation for some k′⩽k is called a (⩽k)-separation. If (H_1,H_2) is a separation of H with X=V(H_1)∩V(H_2), then let H_i− and H_i+ be the simple graphs obtained from H_i by removing and adding all edges between vertices in X, respectively.

There exists a function c_???(h,g) such that for every strongly non-planar graph H with h vertices and every surface Σ of Euler genus g,

Conversely, for every graph H that is not strongly non-planar and for every surface Σ in which H embeds, there is a constant c>0 such that for all n⩾4|V(H)|, there is an n-vertex graph that embeds in Σ and contains at least cn copies of H; that is, C(H,Σ,n)⩾cn.

There are two striking observations about Theorem 1.1. First, the characterisation of graphs H does not depend on the surface Σ. Indeed, the only dependence on Σ is in the constants. Second, Theorem 1.1 shows that C(H,Σ,n) is either bounded or Ω(n).

Theorem 1.1 is in fact a special case of the following more general theorem. The next definition is a key to describing our results. A flap in a graph H is a (⩽2)-separation (A,B) such that A+ is planar. Separations (A,B) and (C,D) of H are independent if E(A−)∩E(C−)=∅ and (V(A)∖V(B))∩(V(C)∖V(D))=∅. If H is not 3-connected, then the flap-number of H is defined as the maximum number of pairwise independent flaps in H. If H is 3-connected, then its flap-number is 0 if H is non-planar, and 1 if H is planar. Let f(H) denote the flap-number of H.

For every graph H and every surface Σ in which H embeds,

It is immediate from the definitions that a graph H is strongly non-planar if and only if f(H)=0. So Theorem 1.1 follows from the f(H)⩽1 cases of Theorem 1.2. As an aside, note that Theorem 1.2 can be restated as follows: for every graph H and every surface Σ in which H embeds,

Before continuing, to give the reader some more intuition about Theorem 1.2, we now asymptotically determine C(T,Σ,n) for a tree T.

For every fixed tree T, let β(T) be the size of a maximum stable set in the subforest F of T induced by the vertices with degree at most 2. Then for every fixed surface Σ,

To prove the upper bound in Theorem 1.2 we need several tools from the literature. The first is the following theorem of Eppstein [18].

There exists a function c_???(h,g) such that for every planar graph H with h vertices and no (⩽2)-separation, and every surface Σ of Euler genus g,

A second key tool is the following result by Miller [51] and Archdeacon [7].

We also use the following result of Erdős and Rado [19]; see [6] for a recent quantitative improvement. A t-sunflower is a collection S of t sets for which there exists a set R such that X∩Y=R for all distinct X,Y∈S. The set R is called the kernel of S.

Finally, we mention some well-known corollaries of Euler’s Formula that we use implicitly. Every graph with n⩾3 vertices and Euler genus g has at most 3(n+g−2) edges. Moreover, for bipartite graphs the above bound is 2(n+g−2). For example, this implies that the complete bipartite graph K_3,2g+3 has Euler genus greater than g.

Now we prove the following quantitative version of the upper bound in Theorem 1.1.

Let H be the multiset of the vertex sets of all the copies of H in G. Assume for the sake of contradiction that |H|⩾h!c_???(h,q). Since there are at most h! copies of H on each h-subset of vertices of G, there is a subset H′ of H of size c_???(h,q) such that all members of H′ are distinct. By the Sunflower Lemma, H′ contains a q-sunflower S. Let R be the kernel of S. Thus V(H_1)∩V(H_2)=R for all distinct copies H_1 and H_2 of H in S.

Let Z_1,…,Z_t be the components of the subgraphs of G obtained by deleting R from each copy of H in S. Since q>1, |R|<h. Therefore, each copy of H contributes at least one such component. Thus t⩾q. Since R is the kernel, Z_1,…,Z_t are pairwise disjoint.

The proof of our main theorem uses a variant of the SPQR tree, which we now introduce.

The SPQR tree of a 2-connected graph G is a tree that displays all the 2-separations of G. Since we need to consider graphs which are not necessarily 2-connected, we use a variant of the SPQR tree which we call the SPQRK tree.

is classified either as a

real or virtual edge. By the construction of an SPQRK tree each edge e∈E(G) appears in exactly one minor H_a as a real edge, and each edge e∈E(H_a) which is classified real is an edge of G. The SPQRK tree T_G is defined recursively as follows.

As a side remark, note that the SPQRK tree T_G of G is in fact not unique—there is some freedom in choosing b_i in the last point in the definition above—however, for our purposes we do not need uniqueness, we only need that T_G displays all the (⩽2)-separations of G.

There exists a function c_???(j,g) with the following property. Let Σ be a surface of Euler genus g. Let X be a clique with |X|⩽2 in a planar graph J with j vertices, such that there does not exist independent flaps (A,B) and (C,D) of J with X⊆V(B∩D). Then for every n-vertex graph G embeddable in Σ and every clique Y in G with |Y|=|X|, there are at most c_???(j,g)n copies of J in G with X fixed at Y.

The next claim also follows from (⋆). For completeness, we include the proof.

For all w∈V(J)∖(X∪{u,v}), there are three internally disjoint paths in J from w to X∪{u,v}, whose ends in X∪{u,v} are distinct.