In imperfect-information games, subgame solving is significantly more challenging than in perfect-information games, but in the last few years, such techniques have been developed. They were the key ingredient to the milestone of superhuman play in no-limit Texas hold'em poker. Current subgame-solving techniques analyze the entire common-knowledge closure of the player's current information set, that is, the smallest set of nodes within which it is common knowledge that the current node lies. However, this set is too large to handle in many games. We introduce an approach that overcomes this obstacle, by instead working with only low-order knowledge. Our approach allows an agent, upon arriving at an infoset, to basically prune any node that is no longer reachable, thereby massively reducing the game tree size relative to the common-knowledge subgame. We prove that, as is, our approach can increase exploitability compared to the blueprint strategy. However, we develop three avenues by which safety can be guaranteed. First, safety is guaranteed if the results of subgame solves are incorporated back into the blueprint. Second, we provide a method where safety is achieved by limiting the infosets at which subgame solving is performed. Third, we prove that our approach, when applied at every infoset reached during play, achieves a weaker notion of equilibrium, which we coin affine equilibrium, and which may be of independent interest. We show that affine equilibria cannot be exploited by any Nash strategy of the opponent, so an opponent who wishes to exploit must open herself to counter-exploitation. Even without the safety-guaranteeing additions, experiments on medium-sized games show that our approach always reduced exploitability even when applied at every infoset, and a depth-limited version of it led to–to our knowledge–the first strong AI for the massive challenge problem dark chess. 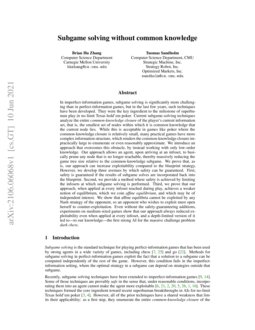 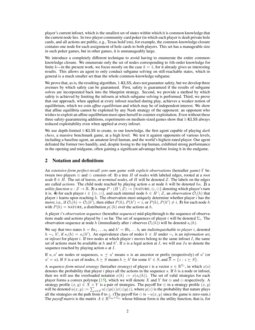 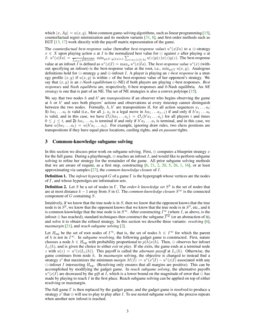 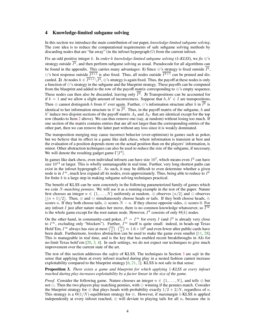 In imperfect-information games, the optimal strategy in a subgame may de...
Noam Brown, et al. ∙

The combination of deep reinforcement learning and search at both traini...
Noam Brown, et al. ∙

A fundamental challenge in imperfect-information games is that states do...
Noam Brown, et al. ∙

An imperfect-information game is a type of game with asymmetric informat...
Qibin Zhou, et al. ∙