In this paper we propose resource allocation algorithm for uplink sparse code multiple access (SCMA) networks to maximize the energy efficiency (EE). Due to the joint optimization of factor graph matrix and power allocation matrix, the EE maximization is a non-convex mixed-integer non-linear program (MINLP) problem. After transforming the non-convex form of the uplink sum rate to a convex one and separating subcarrier assignment and power allocation, we propose an energy efficient subcarrier assignment algorithm. By applying the fractional programming theory based on Dinkelbach method, we then propose power allocation algorithm to maximize EE. Finally, the simulation results show that the proposed resource allocation algorithm can significantly increase the EE of the uplink SCMA network. 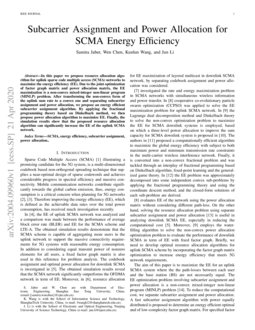 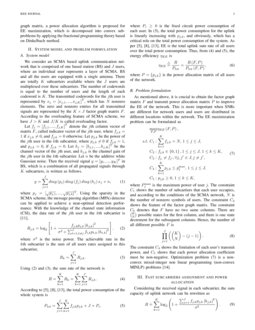 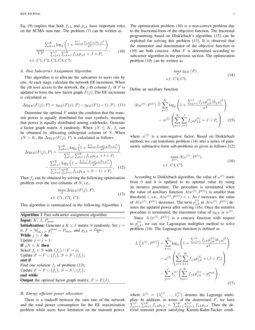 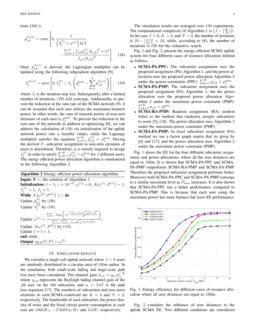 Sparse Code Multiple Access (SCMA) [wei2016scma] illustrating a promising candidate for the 5G system, is a multi-dimensional codebook based non-orthogonal spreading technique that supplies a near-optimal design of sparse codewords and achieves considerable progress in spectral efficiency and massive connectivity. Mobile communication networks contribute significantly towards the global carbon emission, thus, energy consumption is a critical concern when planning for 5G networks [wu2018noma, wu2014ofdma]. Therefore improving the energy efficiency (EE), which is defined as the achievable data rates over the total power consumption, has received much investigation recently.

In [zhang2014sparse], the EE of uplink SCMA network was analyzed and a comparison was made between the performance of average block error rate (BLER) and EE for the SCMA scheme and LTE-A. The obtained simulation results demonstrate that the SCMA scheme is capable of aggregating more users in the uplink network to support the massive connectivity requirements for 5G systems with reasonable energy consumption. In addition to considering equal transmit power of nonzero elements for all users, a fixed factor graph matrix is also used in this reference for problem analysis. The codebook assignment and optimal power allocation for downlink SCMA is investigated in [li2016cost]. The obtained simulation results reveal that the SCMA network significantly outperforms the OFDMA network in term of EE. Moreover, in [jin2018resource], resource allocation for EE maximization of layered multicast in downlink SCMA network, by separating codebook assignment and power allocation was considered.

[zhai2015rate] investigated the rate and energy maximization problem in SCMA networks with simultaneous wireless information and power transfer. In [dong2016energy]

[huang2018power] the Lagrange dual decomposition method and Dinkelbach theory to solve the non-convex optimization problem to maximize the EE for SCMA downlink systems is employed, based on which a three-level power allocation to improve the sum capacity for SCMA downlink system is proposed in [han2018optimal]. The authors in [d2018learning]

proposed a computationally efficient algorithm to maximize the global energy efficiency with subject to both maximum power and minimum transmission rate constraints in the multi-carrier wireless interference network. Finally, it is converted into a non-convex fractional problem and was tackled through an interplay of fractional programming based on Dinkelbach algorithm, fixed-point learning and the generalized game theory. In

[yu2019power] the EE problem was approximately decomposed into some independent convex sub-problems by applying the fractional programming theory and using the coordinate descent method, and the closed-form solutions of each sub-problem are derived.

The aim of this paper is to maximize the EE for an uplink SCMA system where the the path-losses between each user and the base station (BS) are not necessarily equal. The EE optimization problem involving subcarrier assignment and power allocation is a non-convex mixed-integer non-linear program (MINLP) problem [ghasemishabankareh2019genetic]. To reduce the computational cost, we separate subcarrier assignment and power allocation. A fast subcarrier assignment algorithm with power equally distributed is proposed to determine an energy efficient optimal and of low-complexity factor graph matrix. For specified factor graph matrix, a power allocation algorithm is proposed for EE maximization, which is decomposed into convex sub-problems by applying the fractional programming theory based on Dinkelbach method.

We consider an SCMA based uplink communication network that is comprised of one based station (BS) and J users, where an individual user represents a layer of SCMA. BS and all the users are equipped with a single antenna. There are totally K subcarriers available where the J users are multiplexed over these subcarriers. The number of codewords is equal to the number of users and the length of each codeword is K. The transmitted codewords for the jth user is represented by xj=[xj,1,...,xj,K]T, which has N nonzero elements. The zero and nonzero entries for all transmitted signals are represented by the K×J factor graph matrix F. According to the overloading feature of SCMA scheme, we have J>K and J/K is called overloading factor.

where pj=[√pj,1,...,√pj,k]T. Using the sparsity in the SCMA scheme, the message passing algorithm (MPA) detector can be applied to achieve a near-optimal detection performance. With the knowledge of the channel state information (CSI), the data rate of the jth user in the kth subcarrier is [d2018learning],

where σ2 is the noise power. The achievable rate in the kth subcarrier is the sum of all users rates assigned to this subcarrier,

where P={pj,k} is the power allocation matrix of all users of the network.

As mentioned above, it is crucial to obtain the factor graph matrix F and transmit power allocation matrix P to improve the EE of the network. This is more important when SNRs are different for network users and users are distributed in different locations within the network. The EE maximization problem can be formulated as

The constraint C4 shows the limitation of each user’s transmit power, and C5 shows that each power allocation coefficient must be non-negative. Optimization problem (7) is a non-convex mixed-integer non linear programming (non-convex MINLP) problems [ghasemishabankareh2019genetic].

Considering the received signal in each subcarrier, the sum capacity of uplink network can be rewritten as

Eq. (9) implies that both fj,k and pj,k have important roles on the SCMA sum rate. The problem (7) can be written as

This algorithm is to allocate the subcarrier to users one by one. At each stage, calculate the network EE increment. When the jth user access to the network, the j-th column fj of F is updated to form the new factor graph F(j). The EE increment is calculated as

Then fj can be obtained by solving the following optimization problem over the rest columns of S, i.e.,

This algorithm is summarized in the following Algorithm 1.

There is a tradeoff between the sum rate of the network and the total power consumption for the EE maximization problem while users have limitation on the transmit power. The optimization problem (10) is a non-convex problem due to the fractional-form of the objective function. The fractional programming based on Dinklebach’s algorithm [dinkelbach1967nonlinear] can be exploited for solving this problem [d2018learning]. It is observed that the numerator and denominator of the objective function in (10) are both concave. After F is determined according to subcarrier algorithm in the previous section. The optimization problem (10) can be written as

where w(t) is a non-negative factor. Based on Dinklebach method, we can transform problem (14) into a series of parametric subtractive-form sub-problems as given as follows [yu2019power]

Since A(w(t),P(t)) is a concave function with respect to p(t)j,k, we can use Lagrangian multiplier method to solve problem (16). The Lagrangian function is defined as

where λ(t)={λ(t)j,…,λ(t)J} denotes the Lagrange multiplier. In addition, in terms of the determined F, we have ∑Jj=1∑Kk=1fj,kpj,k=∑Kk=1∑Jj=1fj,kpj,k. Then the derived transmit power satisfying Karush-Kuhn-Tucker conditions [boyd2004convex] is

Once p(t+1)j,k is derived, the Lagrangian multiplier can be updated using the following subgradient algorithm [huang2018power],

where βj is the iteration step size. Subsequently, after a limited number of iterations, (19) will converge. Additionally, to prevent the reduction in the sum rate of the SCMA network (9), it can be assumed that each user utilizes the maximum transmit power. In other words, the sum of transmit power of non-zero elements of each user is pmaxj. To prevent the reduction in the sum rate of the network in addition to optimizing EE, we can address the calculation of (18) via initialization of the uplink network power into a feasible values, while the Lagrange multiplier satisfies the equation ∑Kk=1p(t)j,k=pmaxj. Having the derived F, subcarrier assignment to non-zero elements of users is determined. Therefore, it is merely required to design λ(t)j in order to satisfy ∑Kk=1p(t)j,k=pmaxj for J different users. The energy efficient power allocation algorithm is summarized in the following Algorithm 2.

We consider a single-cell uplink network where J=6 users are randomly distributed in a circular area of 100m radius. In the simulation, both small-scale fading and large-scale path loss have been considered. The channel gain hj,k=gj,kd−α2j where gj,k represents the Rayleigh fading channel gain of the jth user on the kth subcarrier, and α=3.67 is the path loss exponent [yang2017uplink]. The numbers of subcarriers and non-zeros elements in each SCMA-codeword are K=4 and N=2, respectively. The bandwidth of each subcarrier, the power density of noise and the fixed circuit power consumption at each user are 180kHz, −174dBm/Hz and 1mW, respectively.

Fig. 1 shows the EE for the four different subcarrier assignments and power allocations, where all the user distances are equal to 100m. It is shown that SCMA-PA-PPC and SCMA-PA-PMP outperforms SCMA-RA-PMP and SCMA-FA-PMP. Therefore the proposed subcarrier assignment performs better. Moreover both SCMA-PA-PPC and SCMA-PA-PMP converge to a similar maximum level as Pmax increases. It is also shown that SCMA-PA-PPC has a better performance compared to SCMA-PA-PMP. This is because that each user using the maximum power has more fairness but loses EE performance.

Fig. 2 considers the influence of user distances to the uplink SCMA EE. Two different conditions are considered for users with the same average location, which are listed in the following table.

From Fig. 2, it is observed that SCMA-PA-PPC has almost the same performance for the user distance condition 1 and condition 2. So does SCMA-PA-PMP. This is due to the proposed method which offers the optimal factor graph that leads to the maximum EE via applying an equal maximum transmit power to each non-zeros element of all users. It is clear that there is a significant increase in EE for SCMA-PA-PPC and SCMA-PA-PMP over SCMA-RA-PMP and SCMA-FA-PMP. The EE for both SCMA-RA-PMP and SCMA-FA-PMP has better performance for the user distance condition 1 than that for condition 2.

In this letter, we proposed a fast subcarrier assignment algorithm for energy efficient uplink SCMA. Then for a determined SCMA factor graph matrix, we propose a power allocation algorithm to solve the non-convex optimization problem using Dinklebach method. By the proposed algorithms, the SCMA EE is well optimized based on subcarrier assignment and power allocation, while the complexity of Algorithm 1 is much decreased compared to the exhaustive search. Simulations show that the proposed algorithm outperforms the random and fixed factor graph matrix, and users closed to base station contribute more to the SCMA EE.