A sub-optimality of Gauss–Hermite quadrature and an optimality of the trapezoidal rule are proved in the weighted Sobolev spaces of square integrable functions of order α, where the optimality is in the sense of worst-case error. For Gauss–Hermite quadrature, we obtain the matching lower and upper bounds, which turns out to be merely of the order n^-α/2 with n function evaluations, although the optimal rate for the best possible linear quadrature is known to be n^-α. Our proof on the lower bound exploits the structure of the Gauss–Hermite nodes; the bound is independent of the quadrature weights, and changing the Gauss–Hermite weights cannot improve the rate n^-α/2. In contrast, we show that a suitably truncated trapezoidal rule achieves the optimal rate up to a logarithmic factor. 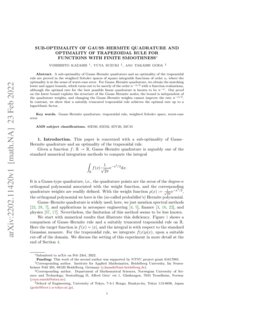 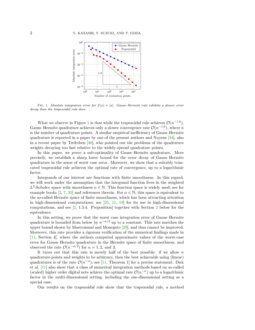 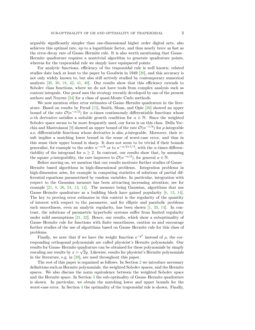 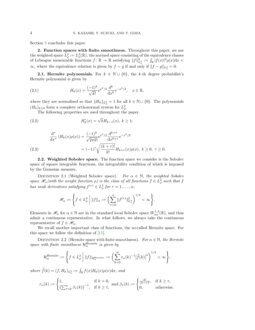 We provide a lower bound showing that the O(1/k) convergence rate of the...
Radu-Alexandru Dragomir, et al. ∙

Optimality of the recursive Neyman allocation

We derive a formula for the optimal sample allocation in a general strat...
Jacek Wesołowski, et al. ∙

This paper is concerned with a sub-optimality of Gauss–Hermite quadrature and an optimality of the trapezoidal rule.

Given a function f:R→R, Gauss–Hermite quadrature is arguably one of the standard numerical integration methods to compute the integral

We start with numerical results that illustrate this deficiency. Figure 1 shows a comparison of Gauss–Hermite rule and a suitably truncated trapezoidal rule on R. Here the target function is f(x)=|x|, and the integral is with respect to the standard Gaussian measure. For the trapezoidal rule, we integrate f(x)ρ(x), upon a suitable cut-off of the domain. We discuss the setting of this experiment in more detail at the end of Section 4.

Integrands of our interest are functions with finite smoothness. In this regard, we will work under the assumption that the integrand function lives in the weighted L2-Sobolev space with smoothness α∈N. This function space is widely used; see for example books [B1998, Canuto.C_etal_2006_book, Shen.J_2011_book] and references therein. For α∈N, this space is equivalent to the so-called Hermite space of finite smoothness, which has been attracting attention in high-dimensional computations; see [IG2015_Hermite, DILP2018, gnewuch2021countable] for its use in high-dimensional computations, and see [B1998, 1.5.4. Proposition] together with Section 2 below for the equivalence.

In this setting, we prove that the worst case integration error of Gauss–Hermite quadrature is bounded from below by n−α/2 up to a constant. This rate matches the upper bound shown by Mastroianni and Monegato [MM1994], and thus cannot be improved. Moreover, this rate provides a rigorous verification of the numerical findings made in [DILP2018, Section 4], where the authors computed approximate values of the worst-case error for Gauss–Hermite quadrature in the Hermite space of finite smoothness, and observed the rate O(n−α/2) for α=1,2, and 3.

It turns out that this rate is merely half of the best possible: if we allow n quadrature-points and weights to be arbitrary, then the best achievable using (linear) quadratures is of the rate O(n−α); see [DILP2018, Theorem 1] for a precise statement. Dick et al. [DILP2018] also show that a class of numerical integration methods based on so-called (scaled) higher order digital nets achieve the optimal rate O(n−α) up to a logarithmic factor in the multi-dimensional setting, including the one-dimensional setting as a special case.

For analytic functions, efficiency of the trapezoidal rule is well known; related studies date back at least to the paper by Goodwin in 1949 [Goodwin1949], and this accuracy is not only widely known to, but also still actively studied by contemporary numerical analysts [S1997, MS2001, GilEtAl2007, Waldvogel2011, TW2014, T2021]. Our results show that this efficiency extends to Sobolev class functions, where we do not have tools from complex analysis such as contour integrals. Our proof uses the strategy recently developed by one of the present authors and Nuyens [NS2021] for a class of quasi-Monte Carlo methods.

We now mention other error estimates of Gauss–Hermite quadrature in the literature. Based on results by Freud

[Freud1972], Smith, Sloan, and Opie [SSO1983] showed an upper bound of the rate O(n−α/2) for α-times continuously differentiable functions whose α-th derivative satisfies a suitable growth condition for α∈N. Since the weighted Sobolev space seems to be more frequently used, our focus is on this class. Della Vecchia and Mastroianni [DM2003] showed an upper bound of the rate O(n−1/6) for ρ-integrable a.e. differentiable functions whose derivative is also ρ-integrable. Moreover, their result implies a matching lower bound in the sense of worst-case error, and thus in this sense their upper bound is sharp. It does not seem to be trivial if their bounds generalise, for example to the order n−α/6 or to n−α/2+1/3, with the α-times differentiability of the integrand for α≥2. In contrast, our results show that, by assuming the square ρ-integrability, the rate improves to O(n−α/2), for general α∈N.

Before moving on, we mention that our results motivate further studies of Gauss–Hermite based algorithms in high-dimensional problems. Integration problems in high-dimension arise, for example in computing statistics of solutions of partial differential equations parametrised by random variables. In particular, integration with respect to the Gaussian measure has been attracting increasing attention; see for example

[Graham.I_eta_2015_Numerische, C2018, YK2019, HS2019ML, D2021, dung2022analyticity]. The measure being Gaussian, algorithms that use Gauss–Hermite quadrature as a building block have gained popularity [C2018, D2021, dung2022analyticity]. The key to proving error estimates in this context is the regularity of the quantity of interest with respect to the parameter, and for elliptic and parabolic problems such smoothness, even an analytic regularity, has been shown [BNT2010SIREV, NT2009parabolic, dung2022analyticity]. In contrast, the solutions of parametric hyperbolic systems suffer from limited regularity under mild assumptions [MNT2013_StochasticCollocationMethod, MNT2015_AnalysisComputationElasticWave]. Hence, our results, which show a suboptimality of Gauss–Hermite rule for functions with finite smoothness, caution us and encourage further studies of the use of algorithms based on Gauss–Hermite rule for this class of problems.

The rest of this paper is organized as follows. In Section 2 we introduce necessary definitions such as Hermite polynomials, the weighted Sobolev spaces, and the Hermite spaces. We also discuss the norm equivalence between the weighted Sobolev space and the Hermite space. In Section 3 the sub-optimality of Gauss–Hermite quadrature is shown. In particular, we obtain the matching lower and upper bounds for the worst-case error. In Section 4 the optimality of the trapezoidal rule is shown. Finally, Section 5 concludes this paper.

Throughout this paper, we use the weighted space L2ρ:=L2ρ(R), the normed space consisting of the equivalence classes of Lebesgue measurable functions f:R→R satisfying ∥f∥2L2ρ:=∫R|f(x)|2ρ(x)dx<∞, where the equivalence relation is given by f∼g if and only if ∥f−g∥L2ρ=0.

For k∈N∪{0}, the k-th degree probabilist’s Hermite polynomial is given by

where they are normalised so that ∥Hk∥L2ρ=1 for all k∈N∪{0}. The polynomials (Hk)k≥0 form a complete orthonormal system for L2ρ.

The following properties are used throughout the paper.

The function space we consider is the Sobolev space of square integrable functions, the integrability condition of which is imposed by the Gaussian measure.

For α∈N, the weighted Sobolev space Hα(with the weight function ρ) is the class of all functions f∈L2ρ such that f has weak derivatives satisfying f(τ)∈L2ρ for τ=1,…,α:

We recall another important class of functions, the so-called Hermite space. For this space we follow the definition of [DILP2018].

For α∈N, the Hermite space with finite smoothness HHermiteα is given by

It turns out Hα=HHermiteα, where the equality here means the norm equivalence. Hence, results established for the Hermite space HHermiteα can be readily translated to Hα up to a constant, which allows us to compare the results on higher order digital nets in [DILP2018] with ours.

for any function ϕ in the space of compactly supported infinitely differentiable functions C∞c(R). Since G is in the standard Sobolev space W1,2(R), there exists a sequence {ϕN}N∈N⊂C∞c(R) that satisfies

In this section, we prove the sub-optimality of Gauss–Hermite quadrature. We first introduce the following linear quadrature of general form

with arbitrary n distinct quadrature points on the real line

Given a quadrature rule Qn, it is convenient to introduce the notation

The quantity ewor(Qn,Hα) is commonly referred to as the worst-case error of Qn in Hα; see for example [Dick.J_Kuo_Sloan_2013_ActaNumerica]. Now we can state our aim of this section more precisely: we prove the matching lower and upper bounds on ewor(QGHn,Hα) for Gauss–Hermite quadrature.

We first derive the following lower bound on ewor(Qn,Hα) for the general quadrature (5).

Then, there exists a constant cα>0, which depends only on α, such that the worst-case error ewor(Qn,Hα) of a general function-value based linear quadrature (5) in the weighted Sobolev space Hα is bounded below by

Then, h turns out to fulfill our purpose. This type of fooling function used to prove lower bounds for the worst-case error is called bump function (of finite smoothness), in quasi-Monte Carlo theory; see, for instance, [DHP2015, Section 2.7].

First we show h∈Hα. It follows from

Using the above results, we obtain

Now the proof is complete. ■

Using the general lower bound in Lemma 2, we obtain the following lower bound on the worst-case error for Gauss–Hermite quadrature.

Let α∈N. For any n≥2, the worst-case error of the Gauss–Hermite quadrature in the weighted Sobolev space Hα is bounded from below as

with a constant Cα>0 that depends on α but independent of n. □

and for n even,

Let n be odd. Using the result in Lemma 2, equations (7), and (8), together with the symmetricity of the Hermite zeros, we obtain

The sum over j is further bounded below by

where erf denotes the error function, and the last inequality holds for any odd n≥3. The sum over k is further bounded above by

Using these bounds, we have