Sliding-window aggregation summarizes the most recent information in a data stream. Users specify how that summary is computed, usually as an associative binary operator because this is the most general known form for which it is possible to avoid naively scanning every window. For strictly in-order arrivals, there are algorithms with O(1) time per window change assuming associative operators. Meanwhile, it is common in practice for streams to have data arriving slightly out of order, for instance, due to clock drifts or communication delays. Unfortunately, for out-of-order streams, one has to resort to latency-prone buffering or pay O( n) time per insert or evict, where n is the window size. This paper presents the design, analysis, and implementation of FiBA, a novel sliding-window aggregation algorithm with an amortized upper bound of O( d) time per insert or evict, where d is the distance of the inserted or evicted value to the closer end of the window. This means O(1) time for in-order arrivals and nearly O(1) time for slightly out-of-order arrivals, with a smooth transition towards O( n) as d approaches n. We also prove a matching lower bound on running time, showing optimality. Our algorithm is as general as the prior state-of-the-art: it requires associativity, but not invertibility nor commutativity. At the heart of the algorithm is a careful combination of finger-searching techniques, lazy rebalancing, and position-aware partial aggregates. We further show how to answer range queries that aggregate subwindows for window sharing. Finally, our experimental evaluation shows that FiBA performs well in practice and supports the theoretical findings. 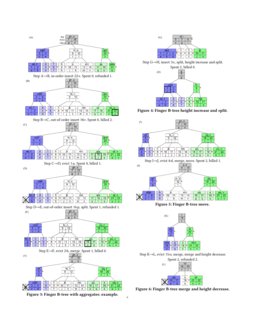 Stream processing is now in widespread production use in domains as varied as telecommunication, personalized advertisement, medicine, transportation, and finance. It is generally the paradigm of choice for applications that expect high throughput and low latency. Regardless of domain, nearly every stream processing application involves some form of aggregation or another, with one of the most common being sliding-window aggregation.

Sliding-window aggregation derives a summary statistic over a user-specified amount of recent streaming data. Users also define how that summary statistic is computed, usually in the form of an associative binary operator (Boykin et al., 2014), as that is the most general known form for which computation can be effectively incrementalized to avoid naïvely scanning every window. While some associative aggregation operators, such as sum, are also invertible, many, such as maximum or Bloom filters, are merely associative but not invertible.

Recent algorithmic research on sliding-window aggregation has given much attention to streams with strictly in-order arrivals. The standard interface for sliding-window aggregation supports insert, evict, and query. In the in-order setting, there are algorithms (Shein et al., 2017; Tangwongsan et al., 2017) for associative operators that take only O(1) time per window change, without requiring the operator to be invertible nor commutative.

In reality, however, out-of-order streams are the norm (Akidau et al., 2013). Clock drift and disparate latency in computation and communication, for example, can cause values in a stream to arrive in a different order than their timestamps. Processing out-of-order streams is already supported in many stream processing platforms (e.g., (Akidau et al., 2013; Zaharia et al., 2013; Carbone et al., 2015; Akidau et al., 2015)). Still, in terms of performance, users who want the full generality of associative operators have to resort to latency-prone buffering or, alternatively, use an augmented balanced tree, such as a B-tree, at a cost of O(logn) time per insert or evict, where n is the window size. This stands in stark contrast with the in-order setting, especially for when the streams are nearly in order. Thus, we ask whether there exists a sub-O(logn) algorithm for out-of-order streams; this paper is our affirmative answer.

This paper introduces the finger B-tree aggregator (FiBA), a novel algorithm that efficiently aggregates sliding windows on out-of-order streams and in-order streams alike. Each insert or evict takes amortized O(logd) time111See Theorem 3.4 for a more formal statement., where the out-of-order distance d is the distance from the inserted or evicted value to the closer end of the window. The O(logd) complexity means O(1) for in-order streams, nearly O(1) for slightly out-of-order streams, and never more than O(logn) even for severely out-of-order streams. The worst-case time for any one particular insert or evict is O(logn), which only happens in the rare case of rebalancing all the way up the tree. FiBA requires O(n) space and takes O(1) time for a whole-window query. Furthermore, it is as general as the prior state-of-the-art, supporting variable-sized windows and only requiring associativity from the operator.

Our solution can be summarized as finger B-trees (Guibas et al., 1977) with position-aware partial aggregates. Starting with the classic B-trees, we first add pointers, or fingers, to the start and end of the tree. These fingers make it possible to perform the search for the value to insert or evict in O(logd) worst-case time. Second, we adapt a specific variant of B-trees where the rebalance to fix the size invariants takes amortized O(1) time; specifically, we use B-trees with MAX_ARITY$=2\cdot$MIN_ARITY and where rebalancing happens after-the-fact (Huddleston and Mehlhorn, 1982). Third and most importantly, we develop novel position-aware partial aggregates and a corresponding algorithm to bound the cost of aggregate repairs to the cost of search plus rebalance.

The running time of FiBA is asymptotically the best possible in general. We prove a lower bound showing that for insert and evict operations with out-of-order distance up to d, the amortized cost of an operation in the worst case must be at least Ω(logd).

Furthermore, we show how FiBA can support window sharing with query time logarithmic in the subwindow size and the distance from the largest window’s boundaries. Here, the space complexity is O(nmax), where O(nmax) is the size of the largest window.

Our experiments confirm the theoretical findings and show that FiBA performs well in practice. For out-of-order streams, it is a substantial improvement over existing algorithms in terms of both latency and throughput. For strictly in-order streams (i.e., FIFO), it demonstrates constant time performance and remains competitive with specialized algorithms for in-order streams.

We hope FiBA will be used to make streaming applications less resource-hungry and more responsive for out-of-order streams.

This section states the problem addressed in this paper more formally. Consider a data stream where each value carries a logical time in the form of a timestamp. Throughout, we denote a timestamped value as [tv]. For example, [174] is the value 4 at logical time 17. The examples in this paper use natural numbers for timestamps, but our algorithms do not depend on any properties of the natural numbers besides being totally ordered. For instance, our algorithms work just as well with date/time representations or with real numbers.

It is intuitive to assume that values in such a stream arrive in nondecreasing order of time (in order). However, due to clock drift and disparate latency in computation and communication, among other factors, values in a stream often arrive in a different order than their timestamps. Such a stream is said to have out-of-order (OoO) arrivals—there exists a later-arriving value that has an earlier logical time than a previously-arrived value.

Our goal in this paper is to maintain the aggregate value of a time-ordered sliding window in the face of out-of-order arrivals. To motivate our formulation below, consider the following example, which maintains the max and the maxcount, i.e., the number of times the max occurs in the sliding window.

Initially, the values 4,3,0,4 arrive in the same order as their associated timestamps 17,19,20,21. The maximum value is 4, and maxcount is 2 because 4 occurs twice. When stream values arrive in order, they are simply appended. For instance, when [224] arrives, it is inserted at the end:

However, when values arrive out-of-order, they must be inserted into the appropriate spots to keep the sliding window time-ordered. For instance, when [185] arrives, it is inserted between timestamps 17 and 19:

As for eviction, stream values are usually removed from a window in order, for instance, evicting [174] from the front:

Notice that, in general, eviction cannot always be accomplished by simply inverting the aggregation value. For instance, evicting [185] cannot be done by “subtracting off” the value 5 from the current aggregation value. The algorithm needs to efficiently discover the new max 4 and maxcount 2:

Since ⊗ is associative, no parentheses are needed for repeated application. When the context is clear, we even omit ⊗, for example, writing qstu for q⊗s⊗t⊗u. This concise notation is borrowed from the mathematicians’ convention of omitting explicit multiplication operators.

OoO SWAG. This paper is concerned with maintaining an aggregation on a time-ordered sliding window where the aggregation operator can be expressed as a monoid. This can be formulated as an abstract data type (ADT) as follows:

Let (⊗,1) be a binary operator operator from a monoid and its identity. The out-of-order sliding-window aggregation (OoO SWAG) ADT is to maintain a time-ordered sliding window [t1v1],…,[tnvn], ti<ti+1, supporting the following operations:

Let m,d∈Z be given such that m≥1 and 0≤d≤m. For any OoO SWAG algorithm, there exists a sequence of 3m operations, each with out-of-order distance at most d, for which the algorithm requires a total of at least Ω(mlog(1+d)) time.

The proof, which appears in Appendix A, shows this in two steps. First, it establishes a sorting lower bound for permutations on m elements with out-of-order distance at most d. Second, it gives a reduction proving that maintaining OoO SWAG is no easier than sorting such permutations.

The insert(t,v) operation supports the case where t is already in the window, so it works with pre-aggregation schemes such as window panes (Li et al., 2005), paired windows (Krishnamurthy et al., 2006), cutty windows (Carbone et al., 2016), or Scotty (Traub et al., 2018). For instance, for a 5-hour sliding window that advances in 1-minute increments, the logical times can be rounded to minutes, leading to more cases where t is already in the window.

Neither insert(t,v) nor evict(t) are limited to values of t that are near either end of the window, so they work in the general case, not just in cases where the out-of-order distance is bounded by buffer sizes or low watermarks.

Query Sharing. As defined above, OoO SWAG does not support query sharing. However, query sharing for different window sizes can be accommodated via a range query:

In these terms, the problem statement of this paper is

This section introduces our algorithm gradually, giving intuition along the way. It begins by describing a basic algorithm (Section 3.1) that utilizes a B-tree augmented with aggregates. This algorithm takes O(logn) time for each insert or evict operation. Reducing the time complexity below logn requires further observations and ideas. This is explored intuitively in Section 3.2 with details fleshed out in Section 3.3.

One way to implement the OoO SWAG is to start with a classic B-tree with timestamps as keys and augment that tree with aggregates. This is a baseline implementation, which will be built upon. Even though any balanced trees can, in fact, be used, we chose the B-tree because it is well-studied and has customizable fan-out degree, providing opportunities for experimentation.

There are many B-tree variations. The range of permissible arity, or fan-out degree of a node, is controlled by two parameters MIN_ARITY and MAX_ARITY. While MIN_ARITY can be any integer greater or equal to 2, most B-tree variations require that MAX_ARITY be at least 2⋅\lstinline{{\lst@@@set@language\lst@@@set@numbers\lst@@@set@frame% \lst@@@set@rulecolor\lst@@@set@numbers\lst@@@set@language\footnotesize{% \@listingGroup{ltx_lst_identifier}{MIN\textunderscore ARITY}}}}−1. Hence, if a(y)—or simply a when the context is clear—denotes the arity of a node y, then a B-tree obeys the following size invariants: