Convolutional Neural Networks (CNNs) define an exceptionally powerful class of models for image classification, but the theoretical background and the understanding of how invariances to certain transformations are learned is limited. In a large scale screening with images modified by different affine and nonaffine transformations of varying magnitude, we analyzed the behavior of the CNN architectures AlexNet and ResNet. If the magnitude of different transformations does not exceed a class- and transformation dependent threshold, both architectures show invariant behavior. In this work we furthermore introduce a new learnable module, the Invariant Transformer Net, which enables us to learn differentiable parameters for a set of affine transformations. This allows us to extract the space of transformations to which the CNN is invariant and its class prediction robust. 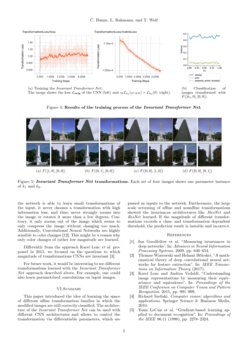 Convolutional Neural Networks have demonstrated impressive performance in the field of computer vision and natural language processing and are thus the cutting edge method for image classification. In several layers of trainable convolutions and subsampling interspersed with sigmoid nonlinearity, features of the input are extracted and fed into a trainable classifier. To classify images or solve pattern recognition tasks reliably, a CNN should combine invariance and discriminability to the input variable. While high level features of the input should be learned, the network’s prediction should be robust to irrelevant input transformations. Thus, learning selective invariant features is a difficult task

[goodfellow2009]. Despite the inflationary use of CNNs, the mathematical theory of how features are extracted and invariances to certain transformations are learned is not well understood yet [wiatowski2017].

In this paper, we propose a new method to extract the space of possible transformations F such that for any image I, the transformed image F(I) and I are classified similarly by the trained network. To achieve this, we propose the architecture Invariant Transform Net, which allows us to introduce affine transformations specified by differentiable parameters and thus, access the space of possible image modifications to which the network is invariant.

We further evaluate the behavior of different CNN architectures by passing a set of affine and nonaffine transformations of increasing magnitude to the trained networks and analyze which kinds of invariances are present. This enables us to define thresholds of different transformations, which – when exceeded – lead to a change in the classification result.

One of the earliest treatments of invariances in deep neural networks was concerned with the question of how to determine the quality of learned representations in an unsupervised fashion [goodfellow2009]. The authors argue that good representations should not only be able to achieve a high performance in a supervised setting (discriminability

), but also generally be invariant to certain transformations in the inputs. They probe this invariance by defining an activity threshold for every hidden neuron based on its responses to random inputs and then applying transformations to inputs for which this neuron is considered active based on the threshold. If the neuron stays active under the input transformations, it is called invariant to them. They use translation and rotation (in 2D and 3D) from natural videos as transformations and test their method on stacked autoencoders and deep belief networks. They observe that invariance to those transformations increases with the depth of the model architecture.

is a linear transformation on

To analyze the behavior of the CNNs AlexNet and ResNet, we used the dataset published in ILSVRC, a well-known benchmark dataset in object category classification consisting of millions of images for the detection of hundreds of object categories [russakovsky2015].

This enabled us to define thresholds and identify critical points at which the network is not able to output correct prediction results any more. We use two measures to quantify this:

The network architecture we used is described in figure 1. The overall idea is to train the weights of the layers FC1 and FC2 while keeping the weights of the CNN fixed. Each of those layers depends on a control parameter (k1 and k2). The parameters k1 and k2 are sampled during training uniformly at random from [0,1]2 which allows us to learn a transformation function F(k1,k2).

We decided to model color and spatial transformations. Both are differentiable and simple enough to avoid overfitting to single features of the images. The layers FC1 and FC2

consist of two fully connected layers with rectified linear activation functions. This allows us to learn almost arbitrary functions which only depend on the parameters

ki. We decided to split the parameters ki between the spatial and color transformation such that both can be controlled independently.

As both spatial and color transformations are affine, they can be described by two matrices Aθ∈R2×3 and AϕB,ϕ∈R3×4. We can further extend these to be quadratic, by setting the last row to [0,0,...,1]. We denote the extended matrices by ^Aθ and ^AϕB,ϕ

We describe a stochastic loss for these matrices, by measuring how far away they project a set of random unit vectors S:

The more often and the further the matrix A projects one of the elements in x∈S away from its original position, the more this loss decreases. This models the behavior we aim to achieve: to learn transformations of high magnitude such that the resulting transformed images are still classified correctly by the subsequent CNN. In principle, other matrix norms can be used, but we achieved good results with this loss formulation.

Moreover, we also want to enforce that different k1 and k2 values lead to different generated functions by FC1 and FC2. We enforce this by incorporating the parameters ki

to the loss function:

where ki,j describes the j-th value of ki.

The loss must further integrate the fact that learned transformations do not impact the prediction capabilities of the original network. It proved to be rather difficult to train both at once, because of the extremely different value ranges these losses have. Thus, we decided to train the network using batch wise accuracy to select whether we should increase the transformation impact or reduce the original loss. So, for each batch running trough the network we select the batch wide loss to be:

While all tests were performed using the AlexNet architecture, the

can be used with other CNN architectures as well. The Invariant Transformer Network is implemented in Tensorflow (version 1.5.0) [abadi2016].

The first approach analyzed the behavior of the networks AlexNet as well as ResNet for various affine and nonaffine transformations of differing magnitude.

Figure 2 shows exemplary results of Gaussian noise, rotation, zoom and translation on the performance of AlexNet, figure 3 on ResNet. More effects of different transformations can be found in the appendix. Both network architecture show similar behavior with respect to the given transformation.

The results for both networks, AlexNet and ResNet suggest that the increasing addition of Gaussian noise leads to a switch of the class prediction as indicated by the softmax output. Since the networks’ confidence is dependent on the class, the critical level of Gaussian noise leading to a switch in the prediction is dependent on the class as well (fig. 1(a)). Rotation results in a strong reduction of the softmax. For certain point symmetric items like an orange, the softmax output is constant and independent on the transformation or for axisymmetric items, the softmax value returns to high values at a rotation of 180\lx@math@degree (fig. 1(b)).

In the second approach we tried to find transformations F(k1,k2) by training the Invariant Transformer Net with images of the validation set of ImageNet of different classes [krizhevsky2012]. The training shows a constant mean of the loss of the CNN but a reducing loss of the transformers of the Invariant Transformer Net as we expect, since we want to find transformations of high magnitude (fig. 3(a)).

In figure 3(b) we show that the classification of the transformed images does not change and thus, the network is expected to be invariant to the learned transformations.

The results of the large scale screening, as described in the first strategy, are consistent with the behavior one expects from common CNN architectures. This approach represents a general method to systematically access the invariances learned by CNNs and to extract thresholds at which the magnitude of different transformations lead to a misclassification of the input images. We showed that the learned invariances of ResNet correlate to the invariance learned by AlexNet and that both networks are highly sensible to stronger affine and nonaffine transformations.

The second strategy reveals interesting insights: While the network is able to learn small transformations of the input, it never chooses a transformation with high information loss, and thus, never strongly zooms into the image or rotates it more than a few degrees. Contrary, it only zooms out of the image which seems to only compress the image without changing too much. Additionally, Convolutional Neural Networks are highly sensible to color changes [engilberge2017]. This might be a reason why only color changes of rather low magnitude are learned.

Differently from the approach Karel Lenc et al. proposed in 2015, we focused on the questions to which magnitude of transformations CNNs are invariant [lenc2015].

For future work, it would be interesting to see different transformations learned with the Invariant Transformer Net approach described above. For example, one could also learn parametrized convolutions on input images.

Appendix A Sensibility To Transformations

Results showing effects of affine and nonaffine transformations on classification results achieved by the AlexNet and ResNet architectures.