In this paper, we propose the use of a deterministic sequence, known as unique word (UW), instead of the cyclic prefix (CP) in generalized frequency division multiplexing (GFDM) systems. The UW consists of known sequences that, if not null, can be used advantageously for synchronization and channel estimation purposes. In addition, UW allows the application of a highly efficient linear minimum mean squared error (LMMSE) smoother for noise reduction at the receiver. To avoid the conditions of non-orthogonality caused by the insertion of the UW and performance degradation in time varying frequency-selective channels, we use frequency-shift offset quadrature amplitude modulation (FS-OQAM). We present a signal model of a UW-GFDM system considering a single and multiple UWs. We then develop an LMMSE receive filter for signal reception of the proposed UW-GFDM system. Simulations show that the proposed UW-GFDM system outperforms prior work. 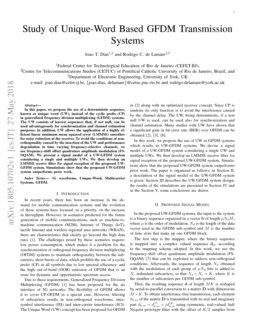 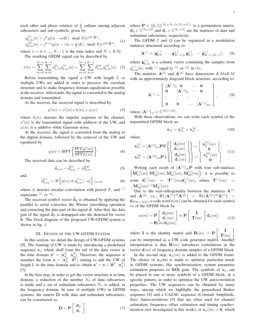 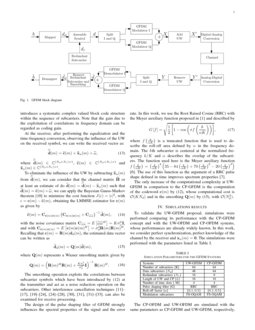 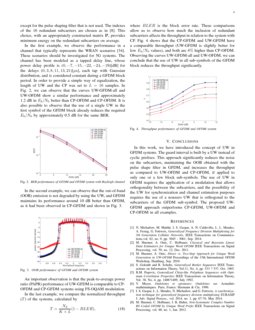 In this paper, we identified the challenges and requirements for the wav...
Yinan Qi, et al. ∙

The contributions of this paper are twofold: Firstly, we introduce a nov...
Zilong Liu, et al. ∙

In recent years, there has been an increase in the demand for mobile communication systems and the evolution of these systems have focused, as a priority, on the increase in throughput. However, in scenarios predicted for the future generation of mobile communications, such as machine-to-machine communication (M2M), Internet of Things (IoT), tactile Internet and wireless regional area networks (WRAN), there are characteristics that clearly go beyond the high data rates [1]. The challenges posed by these scenarios require: low power consumption, which makes it a problem for the synchronization of orthogonal frequency division multiplexing (OFDM) systems to maintain orthogonality between the sub-carriers; short bursts of data, which prohibit the use of a cyclic prefix (CP) in all symbols due to low spectral efficiency; and the high out-of-band (OOB) emission of OFDM that is an issue for dynamic and opportunistic spectrum access.

Due to these requirements, Generalized Frequency Division Multiplexing (GFDM) [1] has been proposed for the air interface of 5G networks. The flexibility of GFDM allows it to cover CP-OFDM as a special case. However, filtering of subcarriers results in non-orthogonal waveforms, inter-symbol interference (ISI) and inter-carrier interference (ICI). The Unique Word (UW) concept has been proposed for OFDM in [2] along with an optimized receiver concept. Since CP is random, its only function is to avoid the interference caused by the channel delay. The UW, being deterministic, if a non null UW is used, can be used also for synchronization and channel estimation. Many studies with UW have shown that a significant gain in bit error rate (BER) over OFDM can be obtained [2, 3, 8].

In the proposed UW-GFDM systems, the input to the system is a binary sequence organized in a vector

b of length μNdM, where μ is the order of modulation, Nd is the length of the data vector used in the GFDM sub-symbol and M is the number of time slots that make up one GFDM block.

The first step is the mapper, where the binary sequence is mapped into a complex valued sequence dd, according to the mapping scheme adopted. In this work, we use the frequency-shift offset quadrature amplitude modulation (FS-OQAM) [7] that can be exploited to address non-orthogonal conditions. Afterwards, the sequence of length Nd obtained with the modulation of each group of μNd bits is added to Nr redundant subcarriers, so that Nd+Nr=K, where K is the number of subcarriers per GFDM sub-symbol.

Then, the resulting sequence d of length MK is reshaped by serial-to-parallel conversion to a matrix D with dimensions M×K. To obtain interference-free transmission, each element dk,m of the matrix D is transmitted with its real and imaginary part dk,m=d(i)k,m+jd(q)k,m using symmetric, real-valued, half Nyquist prototype filter with the offset of K/2 samples from each other and phase rotation of π2 radians among adjacent subcarriers and sub-symbols, given by

The resulting GFDM signal can be described by

Before transmitting the signal a UW with length L or multiple UWs are added in order to preserve the circulant structure and to make frequency domain equalization possible at the receiver. Afterwards, the signal is converted to the analog domain and transmitted.

where h(n), denotes the impulse response of the channel, x′(n) is the transmitted signal with addition of the UW, and ω(n) is a additive white Gaussian noise.

At the receiver, the signal is converted from the analog to the digital domain, followed by the removal of the UW and equalized by

The received data can be described by

where denotes circular convolution with period N, and (.) represents (i) or (q).

Iii Design of the UW-GFDM System

In this section, we detail the design of UW-GFDM systems [9]. The framing of UW is made by introducing a predefined sequence xu which shall form the tail of the data vector in the time domain x′=[xTd  xTu]. Therefore, the sequence x assumes the form x=[xTd  0T] aiming to add the UW of length L in the time domain and to obtain x′=x+[0T  xTu] [3].

where P∈{0,1}(Nd+Nr)×(Nd+Nr) is a permutation matrix, dd∈CNd×M and dr∈CNr×M are the matrices of data and redundant subcarriers, respectively.

The GFDM I and Q can be organized in a modulation matrices structured according to:

The matrices A(i) and A(q) have dimensions KMxKM with an approximately diagonal block structure, according to:

With these observations, we can write each symbol of the transmitted GFDM block as:

R(m)=P[IT(m)] can be interpreted as a UW code generator matrix. Another interpretation is that R(m) introduces correlations in the vector d(m) of frequency domain samples of a GFDM block.

In the second step, xu(m) is added to the GFDM frame. The choice of xu(m) is made to optimize particular needs in GFDM systems, like synchronization, system parameter estimation purposes or BER gain. The symbols of xu can be placed in one or more symbols of a GFDM block, in a specific pattern, in order to optimize the UW autocorrelation properties. The UW sequences can be obtained by many ways, among which we highlight: the generalized Barker sequence[4] and a CAZAC sequence (Constant Amplitude, Zero Autocorrelation) [5] that are often used for channel estimation, frequency offset estimation and timing synchronization (not investigated in this work); or xu(m)=0, which introduces a systematic complex valued block code structure within the sequence of subcarriers. Note that the gain due to the exploitation of correlations in frequency domain can be regarded as coding gain.

At the receiver, after performing the equalization and the time-frequency conversion, observing the influence of the UW on the received symbol, we can write the received vector as:

To eliminate the influence of the UW by subtracting ˜xu(m) from ˜ˆd(m), we can consider that the channel matrix ~H or at least an estimate of do such that ˆd(m)=ˆc(m)+˜ω, we can apply the Bayesian Gauss-Markov theorem [10] to minimize the cost function J(ϵ)=|ϵ|2, with ϵ=c(m)−ˆc(m), obtaining the LMMSE estimator for c(m) as given by

where Q(m) represents a Wiener smoothing matrix given by

The design of the pulse shaping filter of GFDM strongly influences the spectral properties of the signal and the error rate. In this work, we use the Root Raised Cosine (RRC) with the Meyer auxiliary function proposed in [1] and described by

where f(kαK) is a truncated function that is used to describe the roll-off area defined by α in the frequency domain. The kth subcarrier is centered at the normalized frequency k/K and α describes the overlap of the subcarriers. The function used here is the Meyer auxiliary function [6]. The use of this function as the argument of a RRC pulse shape defined in time improves spectrum properties [7].

To validate the UW-GFDM proposal, simulations were performed comparing its performance with the CP-GFDM concept and with the UW-OFDM and CP-OFDM systems, whose performances are already widely known. In this work, we consider perfect synchronization, perfect knowledge of the channel by the receiver and xu(m)=0. The simulations were performed with the parameters listed in Table I.

The CP-OFDM and UW-OFDM are simulated with the same parameters as CP-GFDM and UW-GFDM, respectively, except for the pulse shaping filter that is not used. The indexes of the 16 redundant subcarriers are chosen as in [8]. This choice, with an appropriately constructed matrix P, provides minimum energy on the redundant subcarriers on average.

s], each tap with Gaussian distribution, and is considered constant during a GFDM block period. In order to provide a simple way of equalization, the length of UW and the CP was set to

L=16 samples. In Fig. 2, we can observe that the curves UW-GFDM-all and UW-OFDM show a similar performance and approximately 1.2 dB in Eb/N0 better than CP-OFDM and CP-OFDM. It is also possible to observe that the use of a single UW in the first symbol of the GFDM block already reduces the required Eb/N0 by approximately 0.5 dB for the same BER.

In the second example, we can observe that the out-of-band (OOB) emission is not degraded by using the UW, and GFDM maintains its performance around 10 dB better than OFDM, as it had been observed in CP-GFDM and shown in Fig. 3.

An important observation is that the peak-to-average power ratio (PAPR) performance of UW-GFDM is comparable to CP-OFDM and CP-GFDM systems using FS-OQAM modulation.

In the last example, we compare the normalized throughput (T) of the systems, calculated by

where BLER is the block error rate. These comparisons allow us to observe how much the inclusion of redundant subcarriers affects the throughput in relation to the system with CP. Fig. 4 shows that the CP-GFDM and UW-GFDM have a comparable throughput (UW-GFDM is slightly better for low Eb/N0 values), and both are 8% higher than CP-OFDM. Observing the curves UW-GFDM-all and UW-OFDM, we can conclude that the use of UW in all sub-symbols of the GFDM block reduces the throughput significantly.

In this work, we have introduced the concept of UW in GFDM systems. The guard interval is built by a UW instead of cyclic prefixes. This approach significantly reduces the noise on the subcarriers, maintaining the OOB obtained with the pulse shape filter in GFDM, and increases the throughput as compared to UW-OFDM and CP-OFDM, if applied to only one or a few block sub-symbols. The use of UW in GFDM requires the application of a modulation that allows orthogonality between the subcarriers, and the possibility of the UW for synchronization and channel estimation purposes requires the use of a nonzero UW that is orthogonal to the subcarriers of the GFDM sub-symbol. The proposed UW-GFDM approach outperforms CP-GFDM, UW-OFDM and CP-OFDM in all examples.