In this paper, we investigate channel estimation techniques for 5G multicarrier systems. Due to the characteristics of the 5G application scenarios, channel estimation techniques have been tested in Orthogonal Frequency Division Multiplexing (OFDM) and Generalized Frequency Division Multiplexing (GFDM) systems. The orthogonality between subcarriers in OFDM systems permits inserting and extracting pilots without interference. However, due to pulse shaping, subcarriers in GFDM are no longer orthogonal and interfere with each other. Due to such interference, the channel estimation for GFDM is not trivial. A robust and low-complexity channel estimator can be obtained by combining a minimum mean-square error (MMSE) regularization and the basis expansion model (BEM) approach. In this work, we develop a BEM-type channel estimator along with a strategy to obtain the covariance matrix of the BEM coefficients. Simulations show that the BEM-type channel estimation shows performance close to that of the linear MMSE (LMMSE), even though there is no need to know the channel power delay profile, and its complexity is low. 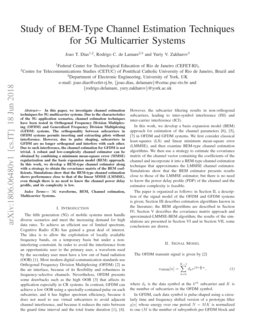 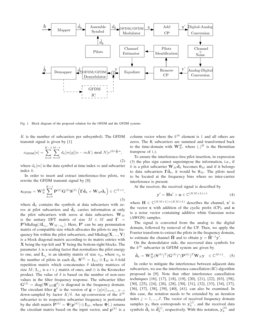 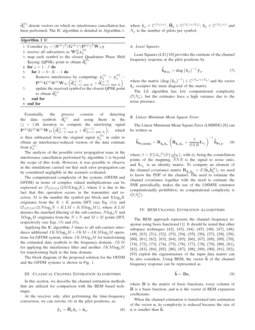 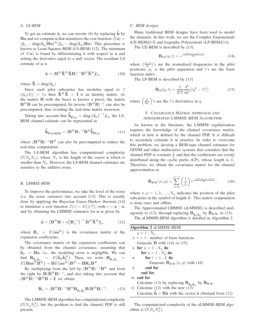 Channel Estimation based on Gaussian Mixture Models with Structured Covariances

The fifth generation (5G) of mobile systems must handle diverse scenarios and meet the increasing demand for high data rates. To achieve an efficient use of limited spectrum, Cognitive Radio (CR) has gained a great deal of interest. The idea is to allow the exploitation of locally available frequency bands, on a temporary basis but under a non-interfering constraint. In order to avoid the interference from an opportunistic user to the primary user, a waveform used by the secondary user must have a low out of band radiation (OOB) [1]. Most modern digital communication standards use Orthogonal Frequency Division Multiplexing (OFDM) [2] as the air interface, because of its flexibility and robustness in frequency-selective channels. Nevertheless, OFDM presents some drawbacks such as the high OOB [3] that affects its application especially in CR systems. In contrast, GFDM can achieve a low OOB using a spectrally-contained pulse on each subcarrier, and it has higher spectrum efficiency, because it does not need to use virtual subcarriers to avoid adjacent channel interference, and because it reduces the ratio between the guard time interval and the total frame duration [1, 4]. However, the subcarrier filtering results in non-orthogonal subcarriers, leading to inter-symbol interference (ISI) and inter-carrier interference (ICI).

In this work, we develop a basis expansion model (BEM) approach for estimation of the channel parameters [6, 5, 7]

The OFDM transmit signal is given by [2]

where dk is the data symbol at the kth subcarrier and K is the number of subcarriers in the OFDM symbol.

In GFDM, each data symbol is pulse-shaped using a circularly time and frequency shifted version of a prototype filter g[n] whose energy over one period N=MK is normalized to one (M is the number of subsymbols per GFDM block and K is the number of subcarriers per subsymbol). The GFDM transmit signal is given by [1]

where dk[m] is the data symbol at time index m and subcarrier index k.

In order to insert and extract interference-free pilots, we rewrite the GFDM transmit signal by [8]

is an identity matrix of size

np, where np is the number of pilots in each ~dk. S(δ)=1δ,1⊗IM is δ-fold repetition matrix which concatenates δ identity matrices of size M; 1i,j is a i×j matrix of ones, and ⊗ is the Kronecker product. The value of δ is based on the number of non-zero values in the filter frequency response. The subcarrier filter G(δ)=diag(WMδgδ) is diagonal in the frequency domain. The circulant filter gδ is the version of g=(g[n])n=0,...N−1 down-sampled by factor K/δ. An up-conversion of the kth subcarrier to its respective subcarrier frequency is performed by the shift matrix P(k)=Ψ(p(k))⊗IM, where Ψ(.) returns the circulant matrix based on the input vector, and p(k) is a column vector where the kth element is 1 and all others are zeros. The K subcarriers are summed and transformed back to the time-domain with WHN, where (.)H is the Hermitian transpose of (.).

To ensure the interference-free pilot insertion, in expression (3) the plus sign cannot superimpose the information, i.e., if k is a pilot subcarrier WMˇdk becomes 0M and if it belongs to data subcarriers Γ~dk, it would be 0M. The pilots need to be located at the frequency bins where no inter-carrier interference is present.

where H∈C(KM+L)×(KM+L) describes the channel, x′ is the vector x with addition of the cyclic prefix (CP), and n is a noise vector containing additive white Gaussian noise (AWGN) samples.

The signal is converted from the analog to the digital domain, followed by removal of the CP. Then, we apply the Fourier transform to extract the pilots in the frequency domain, to estimate the channel

On the demodulator side, the recovered data symbols for the kth subcarrier in GFDM system are given by

Essentially, the process consists of detecting the data symbols ^d(j)k and using them in the (j+1)th iteration to compute the interfering signal P(k)G(δ)S(δ)WM(^d(j−1)(k−1) mod K+^d(j−1)(k+1) mod K), which is then subtracted from the original signal y(0)k in order to obtain an interference-reduced version of the data estimate from y(j)k.

The analysis of the possible error propagation issue in the interference cancellation performed by algorithm 1 is beyond the scope of this work. However, it was possible to observe in the simulations carried out that such error propagation can be considered negligible in the scenario evaluated.

The computational complexity of the systems (OFDM and GFDM) in terms of complex valued multiplications can be expressed as: OOFDM(2MKlog2K), where 2 is due to the fact that this operation occurs in the transmitter and receiver, M is the number the symbol per block and Klog2K originates from the K×K points DFT (see Eq. (1)); and OGFDM(2(Nlog2N+KLM+KMlog2M)), where KLM denotes the matched filtering of the sub-carriers, Nlog2N and Mlog2M originates from the N×N and M×M points DFT, respectively (see Eqs. (3) and (5)).

The block diagram of the proposed solution for the OFDM and the GFDM systems is shown in Fig. 1.

In this section, we describe the channel estimation methods that are utilized for comparison with the BEM based technique.

At the receiver side, after performing the time-frequency conversion, we can rewrite (4) in the pilot positions, as:

where the matrix (diag{~xp}−1)∈C(Np)×(Np) and the vector ~xp occupies the main diagonal of the matrix.

, but the estimates have a high variance due to the noise presence.

where β=E{|dk|2}E{1|dk|2}, with dk being the constellation points of the mapping, SNR is the signal to noise ratio, and INp is an identity matrix. To compute an element of the channel covariance matrix R~hp~hp=E{~hp~hHp}, we need to know the PDP of the channel. The need to estimate the channel covariance together with the need to estimate the SNR periodically, makes the use of the LMMSE estimator computationally prohibitive; its computational complexity is O(N3p).

where B is the matrix of basis functions, every column of B is a basis function, and a is the vector of BEM expansion coefficients.

When the channel estimation is transformed into estimation of the vector a, its complexity is reduced because the size of a is smaller than ~h.

To get an estimate ^a, we can rewrite (6) by replacing ~h by Ba and we compute a that minimizes the cost function J(a)=(~yp−diag(~xp)Ba)H(~yp−diag(~xp)Ba). This procedure is known as Least-Squares BEM (LS-BEM) [12]. The minimum of J(a) is found by differentiating it with respect to a and setting the derivative equal to a null vector. The resultant LS estimate of a is

Since each pilot subcarrier has modulus equal to 1 (|~xp(k)|=1), then ~XH~X=I is an identity matrix. As the matrix B with the bases is known a priori, the matrix BHB can be precomputed. Its inverse (BHB)−1 can also be precomputed, thus avoiding the real-time matrix inversion.

Taking into account that ^~hpLS=diag{~xp}−1~yp, the LS-BEM channel estimate can be represented as

where (BHB)−1BH can also be precomputed to reduce the real-time computation.

The LS-BEM algorithm has computational complexity O(NpNa), where Na is the length of the vector a which is smaller than Np. However, the LS-BEM channel estimates are sensitive to the additive noise.

To improve the performance, we take the level of the noise (i.e. the noise variance) into account [13]. This is usually done by applying the Bayesian Gauss-Markov theorem [14] to minimize a cost function J(ϵ)=E{|ϵ|2}, with ϵ=a−^a, and by obtaining the LMMSE estimator for a as given by

where Ra=E{aaH} is the covariance matrix of the expansion coefficients.

The covariance matrix of the expansion coefficients can be obtained from the channel covariance, assuming that ~hp=Ba, i.e., the modeling error is negligible. We can find R~hp~hp=E{~hp~hHp}. Then, we write .

By multiplying from the left by (BHB)−1BH and from the right by B(BHB)−1, and also taking into account that (BHB)−1BHB=I, we obtain

The LMMSE-BEM algorithm has computational complexity O(NpN2a), but the problem to find the channel PDP is still present.

Many traditional BEM designs have been used to model the channels. In this work, we use the Complex Exponentials (CE-BEM)[13] and Legendre Polynomials (LP-BEM)[11].

where (ps.qK)’s are the normalized frequencies in the pilot positions, ps is the pilot separation and t’s are the basis function index.

where (dtdqt)’s are the t’s derivatives in q.

As known in the literature, the LMMSE regularization requires the knowledge of the channel covariance matrix, which in turn is defined by the channel PDP. It is difficult to accurately estimate it in practice. In order to overcome this problem, we develop a BEM-type channel estimator for GFDM and other multicarrier systems that considers that the channel PDP is constant 1L and that the coefficients are evenly distributed along the cyclic prefix (CP), whose length is L. Therefore, we obtain the covariance matrix for the channel approximation as

where n,p=1,2,…,Np indicates the position of the pilot subcarrier in the symbol of length K. This matrix computation is done once and offline.

The aLMMSE-BEM algorithm is detailed in Algorithm 2.

The choice of the number of basis functions was performed in order to optimize the MSE in all range of the tested Eb/N0.

) samples, each tap is modeled by a Gaussian distribution. In order to provide a simple way of equalization, the length of CP was chosen with 8 samples.

In Fig. 2, we can observe that the OFDM system (solid line) and the GFDM system (dotted line) show very similar performances, the small difference observed can be attributed to the presence of CP in all OFDM symbols, which degrades the Eb/N0. The approximated LMMSE BEM (aLMMSE-BEM) shows a MSE 5 dB lower than that of the LS-BEM, and 10 dB lower than that of the classic LS. The curves CE-BEM-aLMMSE and LP-BEM-aLMMSE show a similar performance for low SNR, but the CE-BEM-aLMMSE shows the best performance for high SNR (above 20 dB). This behavior shows that the CE basis functions are a superior choice for the estimation of this channel model, while the LP would need a greater number of basis functions to avoid the floor observed in its MSE estimates. As already known in the literature, the best estimation is obtained with the LMMSE [10], which requires knowledge of channel PDP and whose complexity is high.

In the second example, shown in Fig. LABEL:ber_ofdm, we can observe that the Bit Error Rate (BER) performance for the aLMMSE-BEM estimator is approximately 0.5 dB better than that of LS-BEM, 1.5 dB better than that of LS, and very close to that of the LMMSE and when the channel state information (CSI) is known. The CE and LP basis functions show quite similar performance. The best performance of the BER in the GFDM system, when compared to the OFDM system, may be associated with the degradation of the Eb/N0 due to the presence of the CP in all the OFDM symbols.

The work of Y. Zakharov is partly supported by the UK Engineering and Physical Sciences Research Council (EPSRC) through Grant EP/R003297/1.