This paper aims to improve the feature learning in Convolutional Networks (Convnet) by capturing the structure of objects. A new sparsity function is imposed on the extracted featuremap to capture the structure and shape of the learned object, extracting interpretable features to improve the prediction performance. The proposed algorithm is based on organizing the activation within and across featuremap by constraining the node activities through ℓ_2 and ℓ_1 normalization in a structured form. 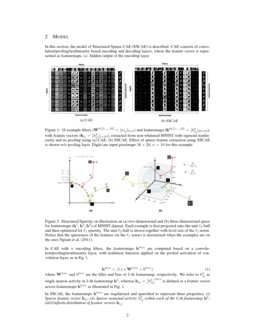 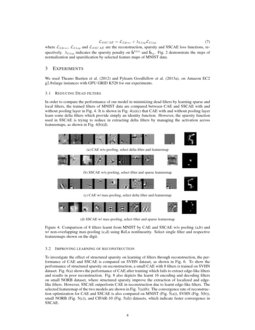 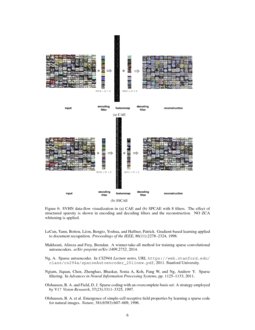 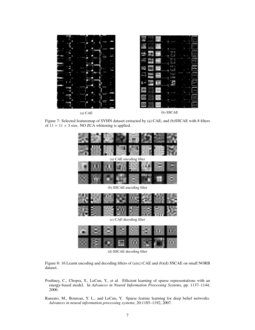 We study the problem of how to build a deep learning representation for ...
Zhuotun Zhu, et al. ∙

The Interpretable Dictionary in Sparse Coding

Joint embedding of structure and features via graph convolutional networks

have shown to be powerful models in extracting rich features from high-dimensional images. They employ hierarchical layers of combined convolution and pooling to extract compressed features that capture the intra-class variations between images. The purpose of applying pooling over neighbor activations in featuremaps of Convnet is to break the spatial correlation of neighboring pixels, and to improve the scale and translation invariant features learned by Convnet. This also helps in learning filters for generic feature extraction of low-mid-high level of concepts, such as edge detectors, geometric shapes, and object class

Several regularization techniques have been proposed to improve feature extraction in Counvnet and to overcome overfitting in large deep networks with many parameters. A dropout technique in Srivastava et al. (2014)

is based on randomly dropping hidden units with its connnection during training to avoid co-adaptaion or redundant filter training. This method resemble averaging over ensemble of sub-models, where each sub-model is trained based on a subset of parameters. A maxout neuron is proposed in

while a maxout neuron, with the maximum of activity across featuremaps is computed in Counvnets. Maxout networks have shown to improve the classification performance by building a convex an unbounded activation function, which prevents learning dead filters. A winner-take-all method is employed in

Makhzani & Frey (2014) to reduce or eliminate redundant and delta type filters in pretraining of Counvnet using Convolutional AutoEncoder (CAE), by taking the maximum activity inside featuremap in each training step.

, and in Restricted Boltzmann Machines (RBM)

In this section, the model of Structured Sparse CAE (SSCAE) is described. CAE consists of convolution/pooling/nonlinearity based encoding and decoding layers, where the feature vector is represented as featuremaps, i.e. hidden output of the encoding layer.

In CAE with n encoding filters, the featuremaps hk∈n are computed based on a convolution/pooling/nonlinearity layer, with nonlinear function applied on the pooled activation of convolution layer, as in Eq. 1.

where Wk∈n and bk∈n are the filter and bias of k-th featuremap, respectively. We refer to hkij as single neuron activity in k-th featuremap hk, whereas hij=[hkij]k∈n is defined as a feature vector across featuremaps hk∈n as illustrated in Fig. 1.

In SSCAE, the featuremaps hk∈n are reqularized and sparsified to represent three properties; (i) Sparse feature vector hij; (ii) Sparse neuronal activity hkij within each of the k-th featuremap hk; (iii)Uniform distribution of feature vectors hij.

In (i), sparsity is imposed on feature vector hij to increase diversity of features represented by each featuremap, i.e. each hk∈n should represent a distinguished and discriminative characteristic of the input, such as different parts, edges, etc. This property is exemplified in Fig. 1(b) with digits decomposed into parts across featuremaps hk∈n. As stipulated in (ii), sparsity is imposed on each featuremap hk∈n to only contain few non-zero activities hkij. This property is encouraged for each featuremap to represent a localized feature of the input. Fig. 1(b) shows property (i) for MNIST dataset, where each featuremap is a localized feature of a digit, wherein Fig. 1(a) shows extracted digit shape-resemblance featurs, a much less successful and non-sparse outcome compared to Fig. 1(b). Fig. 2 also depicts the technique for numerical sparsification of each featuremap. The property (iii) is imposed on activation features hij to have similar statistics with uniform activity. In other words, hij

will be of nearly equal or uniform activity level, if they lie in the object spatial region, or non-active, if not. Uniform activity also improves the generic and part-based feature extraction where the contributing activation features

To enforce the aformentioned sparsity properties in CAE models, we have used the combination of ℓ2 and ℓ1 normalization on hk∈n of Eq. 1, as proposed in Ngiam et al. (2011), and as shown in Fig. 3. In SSCAE, a normalization layer is added on the encoding layer, where the normalized featuremaps ~hk∈n and feature vectors ~hij are imposed by two ℓ2-normalization steps, as in Eq.3 and Eq. 2, respectively,

The final normalized featuremaps ~hk∈n are forwarded as inputs to the decoding layer of unpooling/deconvolution/nonlinearity to reconstruct the input x as in Eq. 4,

where Pk and ck are the filters and biases of decoding layer. In order to enforce the sparsity properties of (i)-(iii), the ℓ1 sparsity is applied on ~hk∈n as in Eq. 6, where the averaged ℓ1 sparsity over n featuremaps and m training data is minimized during the reconstruction of input x, as in Eq’s. 5, 6 and 7,

are the reconstruction, sparsity and SSCAE loss functions, respectively.

λL1sp indicates the sparsity penalty on ~hk∈n and ~hij. Fig. 2 demonstrate the steps of normalization and sparsification by selected feature maps of MNIST data.

In order to compare the performance of our model in minimizing dead filters by learning sparse and local filters, the trained filters of MNIST data are compared between CAE and SSCAE with and without pooling layer in Fig. 4. It is shown in Fig. 4(a)(c) that CAE with and without pooling layer learn some delta filters which provide simply an identity function. However, the sparsity function used in SSCAE is trying to reduce in extracting delta filters by managing the activation across featuremaps, as shown in Fig. 4(b)(d).

To investigate the effect of structured sparsity on learning of filters through reconstruction, the performance of CAE and SSCAE is compared on SVHN dataset, as shown in Fig. 6. To show the performance of structured sparsity on reconstruction, a small CAE with 8 filters is trained on SVHN dataset. Fig. 6(a) shows the performance of CAE after training which fails to extract edge-like filters and results in poor reconstruction. Fig. 8 also depicts the learnt 16 encoding and decoding filters on small NORB dataset, where structured sparsity improve the extraction of localized and edge-like filters. However, SSCAE outperform CAE in reconstruction due to learnt edge-like filters. The selected featuremap of the two models are shown in Fig. 7(a)(b). The convergence rate of reconstruction optimization for CAE and SSCAE is also compared on MNIST (Fig. 5(a)), SVHN (Fig. 5(b)), small NORB (Fig. 5(c)), and CIFAR-10 (Fig. 5(d)) datasets, which indicate faster convergence in SSCAE.