Pixel-wise classification, where each pixel is assigned to a predefined class, is one of the most important procedures in hyperspectral image (HSI) analysis. By representing a test pixel as a linear combination of a small subset of labeled pixels, a sparse representation classifier (SRC) gives rather plausible results compared with that of traditional classifiers such as the support vector machine (SVM). Recently, by incorporating additional structured sparsity priors, the second generation SRCs have appeared in the literature and are reported to further improve the performance of HSI. These priors are based on exploiting the spatial dependencies between the neighboring pixels, the inherent structure of the dictionary, or both. In this paper, we review and compare several structured priors for sparse-representation-based HSI classification. We also propose a new structured prior called the low rank group prior, which can be considered as a modification of the low rank prior. Furthermore, we will investigate how different structured priors improve the result for the HSI classification. 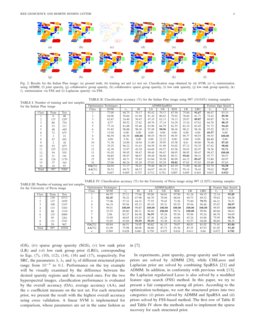 one of the most important procedures in HSI is image classification, where the pixels are labeled to one of the classes based on their spectral characteristics. Due to the numerous demands in mineralogy, agriculture and surveillance, the HSI classification task is developing very rapidly and a large number of techniques have been proposed to tackle this problem [2]. Comparing with previous approaches, SVM is found highly effective on both computational efficiency and classification results. A wide variety of SVM’s modifications have been proposed to improve its performance. Some of them incorporate the contextual information in the classifiers [3, 4]. Others design sparse SVM in order to pursue a sparse decision rule by using ℓ1-norm as the regularizer [5].

Recently, SRC has been proposed to solve many computer vision tasks

[6, 7], where the use of sparsity as a prior often leads to state-of-the-art performance. SRC has also been applied to HSI classification [8], relying on the observation that hyperspectral pixels belonging to the same class approximately lie in the same low-dimensional subspace. In order to alleviate the problem introduced by the lack of sufficient training data, Haq et al. [9] proposed the homotopy-based SRC. Another way to solve the problem of insufficient training data is to employ the contextual information of neighboring pixels in the classifier, such as spectral-spatial constraint classification [10].

In SRC, a test sample y∈RP, where P is the number of spectral bands, can be written as a sparse linear combination of all the training pixels (atoms in a dictionary) as

where x∈RN, ∥x∥1=N∑i=1|xi| is ℓ1-norm. A=[a1,a2,⋯,aN] is a structured dictionary formed from concatenation of several class-wise sub-dictionaries, {ai}i=1,…,N are the columns of A and N is the total number of training samples from all the K classes, and λ is a scalar regularization parameter.

The class label for the test pixel y is determined by the minimum residual between y and its approximation from each class-wise sub-dictionary:

where g⊂{1,2,⋯,K} is the group or class index, and δg(x) is the indicator operation zeroing out all elements of x that do not belong to the class g.

In the case of HSI, SRC always suffers from the non-uniqueness or instability of the sparse coefficients due to the high mutual coherency of the dictionary [11]. Fortunately, a better reconstructed signal and a more robust representation can be obtained by either exploring the dependencies of neighboring pixels or exploiting the inherent dictionary structure. Recently, structured priors have been incorporated into HSI classification [8], which can be sorted into three categories. (a) Priors that only exploit the correlations and dependencies among the neighboring spectral pixels or their sparse coefficient vectors, which includes joint sparsity [13], graph regularized Lasso (referred as the Laplacian regularized Lasso) [14] and the low-rank Lasso [15]. (b) Priors that only exploit the inherent structure of the dictionary, such as group Lasso [16]. (c) Priors that enforce structural information on both sparse coefficients and dictionary, such as collaborative group Lasso [17] and collaborative hierarchical Lasso (CHiLasso) [18]

. Besides SRC, structured sparsity prior can also be incorporated into other classifiers such as the logistic regression classifiers

The main contributions of this paper are (a) to assess the SRC performance using various structured sparsity priors for HSI classification, and (b) to propose a conceptually similar prior to CHiLasso, which is called the low-rank group prior. This prior is based on the assumption that pure or mixed pixels from the same classes are highly correlated and can be represented by a combination of sparse low-rank groups (classes). The proposed prior takes advantage of both the group sparsity prior, which enforces sparsity across the groups, and the low rank prior, which encourages sparsity within the groups, by only using one regularizer.

In HSI, pixels within a small neighborhood usually consist of similar materials. Thus, their spectral characteristics are highly correlated. The spatial correlation between neighboring pixels can be indirectly incorporated through a joint sparsity model (JSM) [12] by assuming that the underlying sparse vectors associated with these pixels share a common sparsity support. Consider pixels in a small neighborhood of T pixels. Let Y∈RP×T represent a matrix whose columns correspond to pixels in a spatial neighborhood in a hyperspectral image. Columns of Y=[y1,y2,⋯,yT] can be represented as a linear combination of dictionary atoms Y=AX, where X=[x1,x2,⋯,xT]∈RN×T represents a sparse matrix. In JSM, the sparse vectors of T neighboring pixels, which are represented by the T columns of X, share the same support. Therefore, X is a sparse matrix with only few nonzero rows. The row-sparse matrix X can be recovered by solving the following Lasso problem

where δg(X) is the indicator operation zeroing out all the elements of X that do not belong to the class g.

where λ1 and λ2 are the regularization parameters. The matrix W is used to characterize the similarity among neighboring pixels in the spectra space. Similar pixels will possess larger weights, and therefore, enforcing the differences between the corresponding sparse coefficient vectors to become smaller, and similarly allowing the difference between sparse coefficient vectors of dissimilar pixels to become larger. Therefore, the Laplacian sparsity prior is more flexible than the joint sparsity prior in that it does not always force all the neighboring pixels to have the same common support. In this paper, the weighting matrix is computed using the sparse subspace clustering method in [20]. Note that this grouping constraint is enforced on the testing pixels instead of the dictionary atoms, which is different from group sparsity. Let L=I−D−1/2WD−1/2 be the normalized symmetric Laplacian matrix [20], where D is the degree matrix computed from W. We can rewrite the equation (5) as

The above equation can be solved by a modified feature-sign search algorithm [14].

The SRC dictionary has an inherent group-structured property since it is composed of several class sub-dictionaries, i.e., the atoms belonging to the same class are grouped together to form a sub-dictionary. In sparse representation, we classify pixels by measuring how well the pixels are represented by each sub-dictionary. Therefore, it would be reasonable to enforce the pixels to be represented by groups of atoms instead of individual ones. This could be accomplished by encouraging coefficients of only certain groups to be active and the remaining groups inactive. Group Lasso [16], for example, uses a sparsity prior that sums up the Euclidean norm of every group coefficients. It will dominate the classification performance especially when the input pixels are inherently mixed pixels. Group Lasso optimization can be represented as

where g⊂{G1,G2,⋯,GK}, ∑g∈G∥xg∥2 represents the group sparse prior defined in terms of K groups, wg is the weight and is usually set to the square root of the cardinality of the corresponding group to compensate for the different group sizes. Here, xg refers to the coefficients of each group. The above group sparsity can be easily extended to the case of multiple neighboring pixels by extending problem (7) to collaborative group Lasso, which is formulated as

where ∑g∈G∥Xg∥2 represents a collaborative group Lasso regularizer defined in terms of group and Xg refers to each of the group coefficient matrix. When the group size is reduced to one, the group Lasso degenerates into a joint sparsity Lasso.

Similarly, Eq. (9) can be easily extended to the multiple feature case, which can be written as

Optimization problem (9) is referred in the literature as the sparse group Lasso and problem (10) as the collaborative hierarchical Lasso (CHiLasso) [18].

To incorporate the structure of the dictionary, we now extend the low rank prior to group low rank prior, where the regularizer is obtained by summing up the rank of every group coefficient matrix,

The tested structured sparse priors are: (i) joint sparsity (JS), (ii) Laplacian sparsity (LS), (iii) collaborative group sparsity (GS), (iv) sparse group sparsity (SGS), (v) low rank prior (LR) and (vi) low rank group prior (LRG), corresponding to Eqs. (7), (10), (12), (14), (16) and (17), respectively. For SRC, the parameters λ,λ1 and λ2 of different structured priors range from 10−3 to 0.1. Performance on the toy example will be visually examined by the difference between the desired sparsity regions and the recovered ones. For the two hyperspectral images, classification performance is evaluated by the overall accuracy (OA), average accuracy (AA), and the κ coefficient measure on the test set. For each structured prior, we present the result with the highest overall accuracy using cross validation. A linear SVM is implemented for comparison, whose parameters are set in the same fashion as in [8].

In experiments, joint sparsity, group sparsity and low rank priors are solved by ADMM [21], while CHiLasso and Laplacian prior are solved by combining SpaRSA [22] and ADMM. In addition, in conformity with previous work [14], the Laplacian regularized Lasso is also solved by a modified feature sign search (FSS) method. In this paper, we try to present a fair comparison among all priors. According to the optimization technique, we sort the structured priors into two categories: (i) priors solved by ADMM and SpaRSA and (ii) priors solved by FSS-based method. The first row of Table II and Table IV show the methods used to implement the sparse recovery for each structured prior.

Sparsity patterns of the toy example are shown in Fig. 1. The expected sparsity regions are shown in Fig. 1(a), where the y-axis labels the dictionary atom index and x-axis labels the test pixel index. The red and green regions correspond to the ideal locations of the active atoms for the class 2 and 14, respectively. Nonzero coefficients that belong to other classes are shown in blue dots. The joint sparsity, Fig. 1 (c), shows clear row sparsity pattern, but many rows are mistakenly activated. As expected, active atoms in Fig. 1 (d), (e) and (g) demonstrate group sparsity patterns. Comparing the GS (d) and SGS (e), it is observed that most of the atoms are deactivated within groups using SGS. The low rank group prior (g) demonstrates a similar sparsity pattern as that of SGS. For the Laplacian sparsity (h), similarity of sparse coefficients that belong to the same classes is clearly visible.

Table II and Fig. 2 show the performance of SRCs with different priors on the Indian Pine image. A spatial window of 9×9 (T=81) is used since this image consists of mostly large homogeneous regions. Among SRCs with different priors, the worst result occurs when we use simple ℓ1-ADMM. Joint sparsity prior gives better result than the low rank prior. This is due to the large areas of homogeneous regions in this image, which favors the joint sparsity model. The highest OA is given by the Laplacian sparsity prior via FFS, such a high performance is partly contributed to the accurate sparse recovery of the feature sign search method. Both SGS and LRG outperform GS. We can see that among ADMM-based based methods, the low rank group prior yields the smoothest result. The computational time of various structured priors for Indian Pine image are shown in Table V. Among ADMM/SpaRSA-based methods, LRG, GS and SGS take roughly similar time (∼2500s) to process the image, while LR and JS require longer time (∼4000s). LS via FFS significantly impedes the computational efficiency.