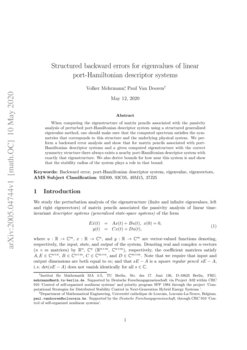 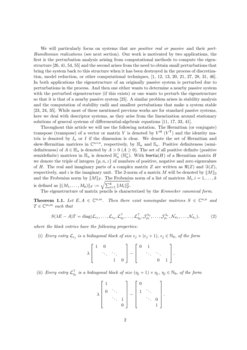 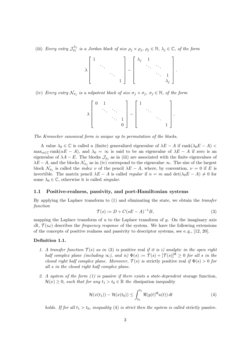 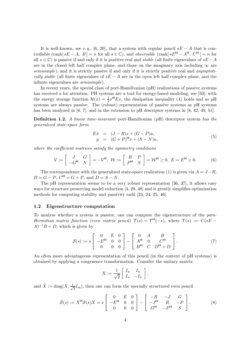 In this work we consider a class of non-linear eigenvalue problems that ...
Pieter Appeltans, et al. ∙

Given a structured matrix A we study the problem of finding the closest ...
Erna Begovic, et al. ∙

We present a method to construct an efficient approximation to the bare ...
F. Henneke, et al. ∙

A standard approach to compute the roots of a univariate polynomial is t...
Vanni Noferini, et al. ∙

We study the perturbation analysis of the eigenstructure (finite and infinite eigenvalues, left and right eigenvectors) of matrix pencils associated the passivity analysis of linear time-invariant descriptor systems (generalized state-space systems) of the form

are vector-valued functions denoting, respectively, the

input, state, and output of the system. Denoting real and complex n-vectors (n×m matrices) by Rn, Cn (Rn×m, Cn×m), respectively, the coefficient matrices satisfy A,E∈Cn×n, B∈Cn×m, C∈Cm×n, and D∈Cm×m. Note that we require that input and output dimensions are both equal to m; and that sE−A is a square regular pencil sE−A, i. e. det(sE−A) does not vanish identically for all s∈C.

We will particularly focus on systems that are positive real or passive and their port-Hamiltonian realizations (see next section). Our work is motivated by two applications, the first is the perturbation analysis arising from computational methods to compute the eigenstructure [26, 41, 54, 55] and the second arises from the need to obtain small perturbations that bring the system back to this structure when it has been destroyed in the process of discretization, model reduction, or other computational techniques, [1, 12, 13, 20, 21, 27, 28, 31, 46]. In both applications the eigenstructure of an originally passive system is perturbed due to perturbations in the process. And then one either wants to determine a nearby passive system with the perturbed eigenstructure (if this exists) or one wants to perturb the eigenstructure so that it is that of a nearby passive system [25]. A similar problem arises in stability analysis and the computation of stability radii and smallest pertubations that make a system stable [23, 24, 35]. While most of these mentioned previous works are for standard passive systems, here we deal with descriptor systems, as they arise from the linearization around stationary solutions of general systems of differenential-algebraic equations [11, 17, 33, 41].

Throughout this article we will use the following notation. The Hermitian (or conjugate) transpose (transpose) of a vector or matrix V is denoted by VH (VT

) and the identity matrix is denoted by

if the dimension is clear. We denote the set of Hermitian and skew-Hermitian matrices in

Cn×n, respectively, by Hn and Sn. Positive definiteness (semi-definiteness) of A∈Hn is denoted by A>0 (A≥0). The set of all positive definite (positive semidefinite) matrices in Hn is denoted H\raisebox2.0pt$>$n (H\raisebox1.5pt$≥$n). With Inertia(H) of a Hermitian matrix H we denote the triple of integers {p,n,z} of numbers of positive, negative and zero eigenvalues of H. The real and imaginary parts of a complex matrix Z are written as R(Z) and I(Z), respectively, and ı is the imaginary unit. The 2-norm of a matrix M will be denoted by ∥M∥2 and the Frobenius norm by ∥M∥F. The Frobenius norm of a list of matrices Mi,i=1,…,k is defined as ∥(M1,…,Mk)∥F:=√∑ki=1∥Mi∥2F.

The eigenstructure of matrix pencils is characterized by the Kronecker canonical form.

where the block entries have the following properties:

The Kronecker canonical form is unique up to permutation of the blocks.

By applying the Laplace transform to (1) and eliminating the state, we obtain the transfer function

In recent years, the special class of port-Hamiltonian (pH) realizations of passive systems has received a lot attention. PH systems are a tool for energy-based modeling, see

[50]; with the energy storage function H(x)=12xHEx, the dissipation inequality (4) holds and so pH systems are always passive. The (robust) representation of passive systems as pH systems has been analyzed in [6, 7], and in the extension to pH descriptor systems in [8, 42, 49, 51].

where the coefficient matrices satisfy the symmetry conditions

The pH representation seems to be a very robust representation [36, 37], it allows easy ways for structure preserving model reduction [4, 29, 48] and it greatly simplifies optimization methods for computing stability and passivity radii [23, 24, 25, 46].

To analyze whether a system is passive, one can compute the eigenstructure of the para-Hermitian matrix function (even matrix pencil) T(s)+TH(−s), where T(s):=C(sE−A)−1B+D, which is given by

An often more advantageous representation of this pencil (in the context of pH systems) is obtained by applying a congruence transformation. Consider the unitary matrix

and ^X:=diag(X,1√2Im), then one can form the specially structured even pencil

There exist simple and well-conditioned transformations to go back and forth between the two representations (1) and (5), since

Thus for a perturbation analysis we can use either of the two system matrices. We will consider the perturbations of the system pencil (7) and then show how to extend them to the pencil (8).

In view of this, in this paper, we study the following questions.

Related questions have already been studied in [3, 6, 23, 25, 35, 44, 45, 46] in the context of finding best pH representations of stable and passive systems and the computation of stability and passivity radii of linear time-invariant dynamical systems. However, all these papers mainly deal with the classical port-Hamiltonian systems, i. e. the case E=I; here we study pH descriptor systems, which have extra properties that need to be incorporated [39, 40].

A lower bound for the backward errors that one can expect is the stability radius of the generalized eigenvalue problem sE−A, since pH systems are guaranteed to be stable. The stability radius ρ(E,A) of a pencil sE−A is defined as the smallest perturbation ∥(ΔE,ΔA)∥F that causes s(E+ΔE)−(A+ΔA) to be on the border of the stability region [22]. In the descriptor case this happens when an eigenvalue reaches the imaginary axis, when the system has an index ≥0 or when the pencil becomes singular [19].

The classical stability radius is given by

and the minimizing perturbation can be constructed from the n

(σn,un,vn) at the minimizing frequency ω,

For large scale system with pH structure, recently a computational method to compute the stability radius has been derived in [2].

The paper is organized as follows. In the next Section 2, we construct a congruence transformation that restores the special structure of the pencil sE−A and we compute upper bounds for its departure from the identity. In Section 3 we illustrate the results of Section 2 with a number of numerical experiments. In Section 4 we end with a few concluding remarks.

Consider a controllable and observable descriptor system of the form (1) associated with a strictly passive pH descriptor system of the form (5) and with E positive definite. If sE−A is a regular pencil, then the finite generalized eigenvalues of sE−A are symmetric with respect to the imaginary axis and there are exactly m semisimple infinite generalized eigenvalues. Moreover,

obtained by forming the Schur complement of sE−A with respect to the block DH+D>0. It is well-known, see [41, 47] that Hamiltonian matrices have a spectrum that is symmetric with respect to the imaginary axis. The inertia of the Hermitian matrix (ıE) is clearly {n,n,m}, since E is invertible. Since we have assumed controllability and observability, it is also well-known [41, 55] that sE−A has no purely imaginary eigenvalues. ∎

A similar result as Lemma 2.1 can also be obtained for the case that E and/or W are only semidefinite. In this case one has to separate the differential and the algebraic equations and one has to make the stronger assumption that the pencil sE−A is of index one. This can be achieved via structured staircase forms, see e.g. [14] for general descriptor system and [5] for pH descriptor systems. In the following we treat the case discussed in Lemma 2.1, i. e. we assume that E and W are positive definite so that we are not on the boundary of the set of passive systems.

When we perturb the pencil sE−A, it is clear that we cannot allow for arbitrary perturbations. The symmetry of the finite spectrum follows from the fact that A is Hermitian end E is skew Hermitian. We will therefore require that the perturbation preserves this, and hence that the backward errors ΔA and ΔE are also Hermitian and skew-Hermitian, respectively, i. e. that sE−A stays an even pencil when perturbed.

If we start to perturb a matrix, then its inertia remains constant in an open neighborhood of the matrix only if it has no zero eigenvalues. Otherwise the inertia will change for arbitrarily small perturbations, unless we impose constraints on the type of perturbations that are allowed. Therefore we will need to impose that our perturbation preserves the rank of the matrix E.

When computing the eigenstructure of even pencils such as (7) or (8), then there exist algorithms that guarantee these properties, see [9, 10] and the references therein. We will employ the even implicitly restarted Arnoldi method of [43], in which A+ΔA stays Hermitian, E+ΔE stays skew-Hermitian, and the null-space of E+ΔE is preserved. When our perturbation results from an eigenvalue algorithm, we can therefore assume that the perturbation sΔE−ΔA of the pencil sE−A satisfies

If the perturbation arises from an approximation of the model (such as discretization or model reduction), then this approximation process needs to be done in such a way, that constraints (such as Kirchhoff’s conditions in networks, or position constraints as in mechanical systems) that result from the physical properties of the system are not destroyed, see [BeaGM19]. If this is done correctly then again the structure (LABEL:strut1) is typically preserved.

2.1 Bounds on the structured backward errors

If we use a backward stable algorithm structure preserving algorithm from [43] to compute the eigenstructure, then where ϵ is a small multiple of the machine precision (unit round-off), and ΔA and ΔE have the structure indicated in (11). To see whether the computed eigenstructure is that associated with a pH descriptor system and to compute the backward error, we need to find a transformation that preserves the computed eigenstructure, preserves the structure indicated in (11), annihilates the diagonal blocks sΔE11−ΔA11 and sΔE22−ΔA22, and also restores the property E+ΔE12=(E+ΔE12)H>0.

with (E+ΔE)H=E+ΔE>0. We also require that Z is as close as possible to the identity matrix, such that {ΔE,ΔA,ΔB,ΔC,ΔD} remain as small as possible. This suggests that we choose Z31=Z32=0 and Z33=Im and look for a submatrix of Z

near the identity matrix, and satisfying the matrix equations

Removing common terms on both sides and using the notation AΔ:=A+ΔA12 and EΔ:=E+ΔE12, we can rewrite these equations as

in which we need to zero out the diagonal blocks. Considering these equations, it seems reasonable to choose Y11=Y22=0 and then solve the remaining quadratic equations

If we ignore the quadratic terms on the right hand side, then we obtain linear systems that are solvable when the pencils sEΔ−AΔ and −sEHΔ−AHΔ have no common eigenvalues, see e. g., [34], which is the case when these pencils come from a sufficiently small perturbation of a system T(s) which is strictly passive. We have the following result.

where σj(M) denotes the jth singular value of the matrix M. Then the solution (Y21,Y12) satisfies the bound

and the fact that ∥vec(M)∥2=∥M∥F for any matrix M. ∎

An estimate of the smallest singular values

using Lemma 2.2. The iterative schemes can then be written as