A popular testbed for deep learning has been multimodal recognition of human activity or gesture involving diverse inputs such as video, audio, skeletal pose and depth images. Deep learning architectures have excelled on such problems due to their ability to combine modality representations at different levels of nonlinear feature extraction. However, designing an optimal architecture in which to fuse such learned representations has largely been a non-trivial human engineering effort. We treat fusion structure optimization as a hyper-parameter search and cast it as a discrete optimization problem under the Bayesian optimization framework. We propose a novel graph-induced kernel to compute structural similarities in the search space of tree-structured multimodal architectures and demonstrate its effectiveness using two challenging multimodal human activity recognition datasets. 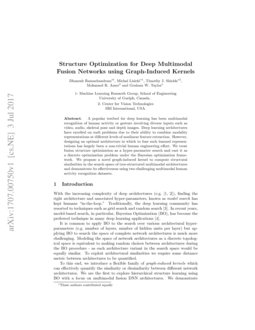 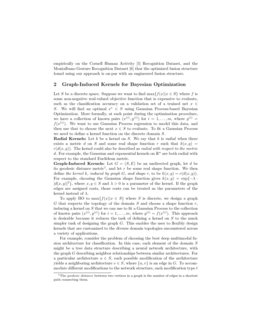 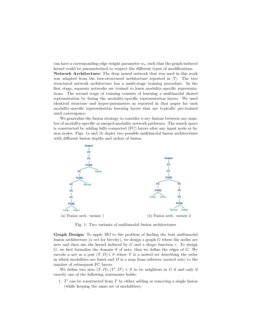 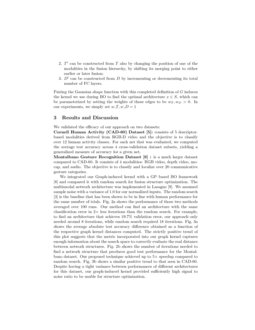 With the increasing complexity of deep architectures (e.g. [1, 2]), finding the right architecture and associated hyper-parameters, known as model search has kept humans “in-the-loop.” Traditionally, the deep learning community has resorted to techniques such as grid search and random search [3]. In recent years, model-based search, in particular, Bayesian Optimization (BO), has become the preferred technique in many deep learning applications [4].

To this end, we introduce a flexible family of graph-induced kernels which can effectively quantify the similarity or dissimilarity between different network architectures. We are the first to explore hierarchical structure learning using BO with a focus on multimodal fusion DNN architectures. We demonstrate empirically on the Cornell Human Activity [5] Recognition Dataset, and the Montalbano Gesture Recognition Dataset [6] that the optimized fusion structure found using our approach is on-par with an engineered fusion structure.

Let S be a discrete space. Suppose we want to find max{f(x)|x∈S} where f is some non-negative real-valued objective function that is expensive to evaluate, such as the classification accuracy on a validation set of a trained net x∈S. We will find an optimal x∗∈S using Gaussian Process-based Bayesian Optimization. More formally, at each point during the optimization procedure, we have a collection of known pairs (x(i),y(i)) for i=1,…,m, where y(i)=f(x(i)). We want to use Gaussian Process regression to model this data, and then use that to choose the next x∈S to evaluate. To fit a Gaussian Process we need to define a kernel function on the discrete domain S.

Radial Kernels: Let k be a kernel on S. We say that k is radial when there exists a metric d on S and some real shape function r such that k(x,y)=r(d(x,y)). The kernel could also be described as radial with respect to the metric d. For example, the Gaussian and exponential kernels on Rn are both radial with respect to the standard Euclidean metric.

Graph-Induced Kernels: Let G=(S,E) be an undirected graph, let d be its geodesic distance metric111The geodesic distance between two vertices in a graph is the number of edges in a shortest path connecting them., and let r be some real shape function. We then define the kernel k, induced by graph G, and shape r, to be k(x,y)=r(d(x,y)). For example, choosing the Gaussian shape function gives k(x,y)=exp{−λ⋅[d(x,y)]2}, where x,y∈S and λ>0 is a parameter of the kernel. If the graph edges are assigned costs, those costs can be treated as the parameters of the kernel instead of λ.

To apply BO to max{f(x)|x∈S} where S is discrete, we design a graph G that respects the topology of the domain S and choose a shape function r, inducing a kernel on S that we can use to fit a Gaussian Process to the collection of known pairs (x(i),y(i)) for i=1,…,m, where y(i)=f(x(i)). This approach is desirable because it reduces the task of defining a kernel on S to the much simpler task of designing the graph G. This enables the user to flexibly design kernels that are customized to the diverse domain topologies encountered across a variety of applications.

For example, consider the problem of choosing the best deep multimodal fusion architecture for classification. In this case, each element of the domain S

might be a tree data structure describing a neural network architecture, with the graph

We generalize the fusion strategy to consider n-ary fusions between any number of modality-specific or merged-modality network pathways. The search space is constructed by adding fully-connected (FC) layers after any input node or fusion nodes. Figs. 0(a) and 0(b) depict two possible multimodal fusion architectures with different fusion depths and orders of fusion.

Graph Design: To apply BO to the problem of finding the best multimodal fusion architecture (a net for brevity), we design a graph G where the nodes are nets and then use the kernel induced by G and a shape function r. To design G, we first formalize the domain S of nets, then we define the edges of G. We encode a net as a pair (T,D)∈S where T is a nested set describing the order in which modalities are fused and D is a map from subtrees (nested sets) to the number of subsequent FC layers.

We define two nets (T,D),(T′,D′)∈S to be neighbors in G if and only if exactly one of the following statements holds:

Pairing the Gaussian shape function with this completed definition of G induces the kernel we use during BO to find the optimal architecture x∈S, which can be parameterized by setting the weights of those edges to be wT,wD>0. In our experiments, we simply set w_T,w_D=1

We validated the efficacy of our approach on two datasets:

consists of 5 descriptor-based modalities derived from RGB-D video and the objective is to classify over 12 human activity classes. For each net that was evaluated, we computed the average test accuracy across 4 cross-validation dataset subsets, yielding a generalized measure of accuracy for a given net.

Montalbano Gesture Recognition Dataset [6] : is a much larger dataset compared to CAD-60. It consists of 4 modalities: RGB video, depth video, mocap, and audio. The objective is to classify and localize over 20 communicative gesture categories.

We integrated our Graph-induced kernel with a GP–based BO framework [8] and compared it with random search for fusion structure optimization. The multimodal network architecture was implemented in Lasagne [9]

. We assumed sample noise with a variance of 1.0 for our normalized inputs. The random search

[3] is the baseline that has been shown to be in line with human performance for the same number of trials. Fig. 1(a) shows the performance of those two methods averaged over 100 runs. Our method can find an architecture with the same classification error in 2× less iterations than the random search. For example, to find an architecture that achieves 19.7% validation error, our approach only needed around 8 iterations, while random search required 18 iterations. Fig. 2(a) shows the average absolute test accuracy difference obtained as a function of the respective graph kernel distances computed. The strictly positive trend of this plot suggests that the metric incorporated into our graph kernel captures enough information about the search space to correctly evaluate the real distance between network structures. Fig. 1(b) shows the number of iterations needed to find a network structure that produces good test performance for the Montalbano dataset. Our proposed technique achieved up to 5× speedup compared to random search. Fig. 2(b) shows a similar positive trend to that seen in CAD-60. Despite having a tight variance between performances of different architectures for this dataset, our graph-induced kernel provided sufficiently high signal to noise ratio to be usable for structure optimization.

In this work, we have proposed a novel graph-induced kernel approach in which easily-designed graphs can define a kernel specialized for any discrete domain. To demonstrate its utility, we have cast a deep multimodal fusion architecture search as a discrete hyper-parameter optimization problem. We demonstrate that our method could optimize the network architecture leading to accuracies that are at par or slightly exceed those of manually-designed architectures [7] while evaluating between 2-5× less architectures than random search on 2 challenging human activity recognition problems.

In our future work, we will extend this approach to non GP-based alternatives to BO optimization techniques such as TPE[10] and SMAC[11], in addition to implementing different graph kernels and examining their relative performance.

This research is partially funded by the Defense Advanced Research Projects Agency (DARPA) and the Air Force Laboratory (AFRL). We would also like to thank the NSERC and Canada Foundation for Innovation for infrastructure funding as well as NVIDIA Corp. for contributing an NVIDIA Titan X GPU.