Deep neural networks have recently demonstrated the traffic prediction capability with the time series data obtained by sensors mounted on road segments. However, capturing spatio-temporal features of the traffic data often requires a significant number of parameters to train, increasing computational burden. In this work we demonstrate that embedding topological information of the road network improves the process of learning traffic features. We use a graph of a vehicular road network with recurrent neural networks (RNNs) to infer the interaction between adjacent road segments as well as the temporal dynamics. The topology of the road network is converted into a spatio-temporal graph to form a structural RNN (SRNN). The proposed approach is validated over traffic speed data from the road network of the city of Santander in Spain. The experiment shows that the graph-based method outperforms the state-of-the-art methods based on spatio-temporal images, requiring much fewer parameters to train. 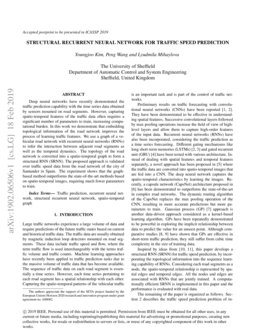 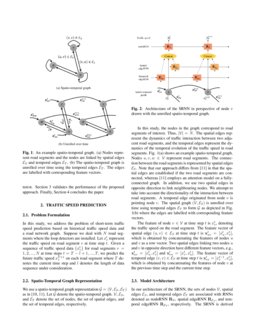 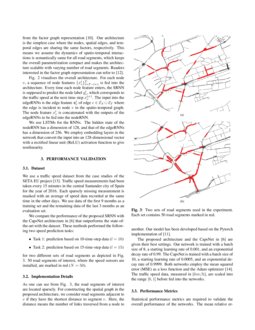 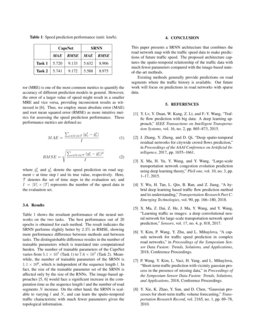 The objective of this study is to predict the near-future flooding statu...
Faxi Yuan, et al. ∙

Scene models construction based on image rendering is a hot topic in the...
Yaochen Li, et al. ∙

Traffic management in a city has become a major problem due to the incre...
Shatrughan Modi, et al. ∙

Large traffic networks experience a large volume of data and require predictions of the future traffic states based on current and historical traffic data. The traffic data are usually obtained by magnetic induction loop detectors mounted on road segments. These data include traffic speed and flow, where the term traffic flow is used interchangeably with the terms traffic volume and traffic counts. Machine learning approaches have recently been applied to traffic prediction tasks due to the massive volume of traffic data that has become available. The sequence of traffic data on each road segment is essentially a time series. However, each time series pertaining to each road segment has a spatial relationship with each other. Capturing the spatio-temporal patterns of the vehicular traffic is an important task and is part of the control of traffic networks.

. They have been demonstrated to be effective in understanding spatial features. Successive convolutional layers followed by max pooling operations increase the field of view of high-level layers and allow them to capture high-order features of the input data. Recurrent neural networks (RNNs) have also been incorporated, considering the traffic prediction as a time series forecasting. Different gating mechanisms like long short-term memories (LSTMs)

[4] have been tested with various architecture. Instead of dealing with spatial features and temporal features separately, a novel approach has been proposed in [5] where the traffic data are converted into spatio-temporal images that are fed into a CNN. The deep neural network captures the spatio-temporal characteristics by learning the images. Recently, a capsule network (CapsNet) architecture proposed in [6] has been demonstrated to outperform the state-of-the-art in complex road networks. The dynamic routing algorithm of the CapsNet replaces the max pooling operation of the CNN, resulting in more accurate predictions but more parameters to train. Gaussian process (GP) [7] approach is another data-driven approach considered as a kernel-based learning algorithm. GPs have been repeatedly demonstrated to be powerful in exploring the implicit relationship between data to predict the value for an unseen point. Although comparative studies [8, 9] have shown that GPs are effective in short-term traffic prediction, they still suffer from cubic time complexity in the size of training data.

Inspired by ideas from [10, 11], this paper develops a structural RNN (SRNN) for traffic speed prediction, by incorporating the topological information into the sequence learning capability of RNNs. Considering each road segments as a node, the spatio-temporal relationship is represented by spatial edges and temporal edges. All the nodes and edges are associated with RNNs that are jointly trained. A computationally efficient SRNN is implemented in this paper and the performance is evaluated with real data.

The remaining of the paper is organized as follows. Section 2 describes the traffic speed prediction problem of interest. Section 3 validates the performance of the proposed approach. Finally, Section 4 concludes the paper.

employs an attention model on a fully-connected graph. In addition, we use two spatial edges in opposite direction to link neighbouring nodes. We attempt to take into account the directionality of the interaction between road segments. A temporal edge originated from node

v is pointing node v. The spatial graph (V,ES) is unrolled over time using temporal edges ET to form G as depicted in Fig. 1(b) where the edges are labelled with corresponding feature vectors.

In our architecture of the SRNN, the sets of nodes V, spatial edges ES, and temporal edges ET are associated with RNNs denoted as nodeRNN RV, spatial edgeRNN RES, and temporal edgeRNN RET, respectively. The SRNN is derived from the factor graph representation [10]. Our architecture is the simplest case where the nodes, spatial edges, and temporal edges are sharing the same factors, respectively. This means we assume the dynamics of spatio-temporal interactions is semantically same for all road segments, which keeps the overall parametrization compact and makes the architecture scalable with varying number of road segments. Readers interested in the factor graph representation can refer to [12].

Fig. 2 visualises the overall architecture. For each node v, a sequence of node features {xtv}Tt=T−l+1 is fed into the architecture. Every time each node feature enters, the SRNN is supposed to predict the node label ytv, which corresponds to the traffic speed at the next time step xt+1v. The input into the edgeRNNs is the edge feature xte of edge e∈ES∪ET where the edge is incident to node v in the spatio-temporal graph. The node feature xtv is concatenated with the outputs of the edgeRNNs to be fed into the nodeRNN.

We use LSTMs for the RNNs. The hidden state of the nodeRNN has a dimension of 128, and that of the edgeRNNs has a dimension of 256. We employ embedding layers in the network that convert the input into an 128-dimensional vector with a rectified linear unit (ReLU) activation function to give nonlinearity.

We use a traffic speed dataset from the case studies of the SETA EU project [13]. Traffic speed measurements had been taken every 15 minutes in the central Santander city of Spain for the year of 2016. Each sparsely missing measurement is masked with an average of speed data recorded at the same time in the other days. We use data of the first 9 months as a training set and the remaining data of the last 3 months as an evaluation set.

We compare the performance of the proposed SRNN with the CapsNet architecture in [6] that outperforms the state-of-the-art with the dataset. These methods performed the following two speed prediction tasks:

for two different sets of road segments as depicted in Fig. 3. 50 road segments of interest, where the speed sensors are installed, are marked in red (N=50).

As one can see from Fig. 3, the road segments of interest are located sparsely. For constructing the spatial graph in the proposed architecture, we consider road segments adjacent to v if they have the shortest distance to segment v

. Here, the distance means the number of links traversed from a node to another. Our model has been developed based on the Pytorch implementation of

The proposed architecture and the CapsNet in [6]

Statistical performance metrics are required to validate the overall performance of the networks. The mean relative error (MRE) is one of the most common metrics to quantify the accuracy of different prediction models in general. However, the error of a larger value of speed might result in a smaller MRE and vice versa, providing inconsistent results as witnessed in [6]. Thus, we employ mean absolute error (MAE) and root mean squared error (RMSE) as more intuitive metrics for assessing the speed prediction performance. These performance metrics are defined as:

Table 1 shows the resultant performance of the neural networks on the two tasks. The best performance out of 20 epochs is obtained for each method. The result indicates the SRNN performs slightly better by

Existing methods generally provide predictions on road segments where the traffic history is available. Our future work will focus on predictions in road networks with sparse data.