We consider a sub-class of the f-divergences satisfying a stronger convexity property, which we refer to as strongly convex, or κ-convex divergences. We derive new and old relationships, based on convexity arguments, between popular f-divergences. 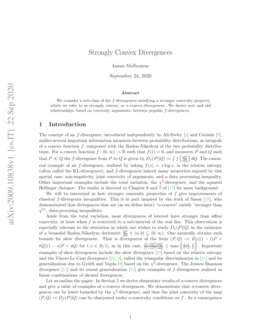 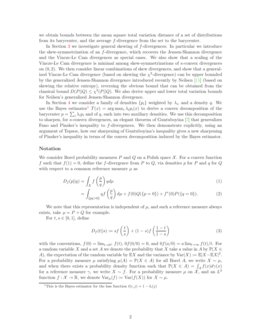 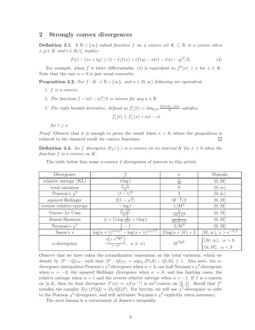 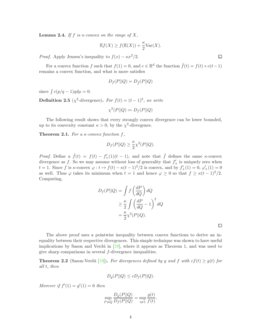 An extension of the proximal point algorithm beyond convexity

We define and study a class of subshifts of finite type (SFTs) defined b...
Ville Salo, et al. ∙

In this paper, we first prove that the minimum-cost packings of disjoint...
Kenjiro Takazawa, et al. ∙

SAdam: A Variant of Adam for Strongly Convex Functions

Convexity in a network (graph) has been recently defined as a property o...
Lovro Šubelj, et al. ∙

, composed with the Radon-Nikodym of the two probability distributions. For a convex function

f:(0,∞)→R such that f(1)=0, and measures P and Q such that P≪Q the f-divergence from P to Q is given by Df(P||Q)\coloneqq∫f(dPdQ)dQ. The canoncial example of an f-divergence, realized by taking f(x)=xlogx, is the relative entropy (often called the KL-divergence), and f-divergences inherit many properties enjoyed by this special case; non-negativity, joint convexity of arguments, and a data processing inequality. Other important examples include the total variation, the χ2-divergence, and the squared Hellinger distance. The reader is directed to Chapter 6 and 7 of [17] for more background.

We will be interested in how stronger convexity properties of f give improvements of classical f-divergence inequalities. This is in part inspired by the work of Sason [18], who demonstrated that divergences that are (as we define later) “κ-convex” satisfy “stronger than χ2”, data-procesing inequalities.

Aside from the total variation, most divergences of interest have stronger than affine convexity, at least when f is restricted to a sub-interval of the real line. This observation is especially relevant to the situtation in which one wishes to study Df(P||Q) in the existence of a bounded Radon-Nikodym derivative dPdQ∈(a,b)⊊(0,∞)

. One naturally obtains such bounds for skew divergences. That is divergences of the form

In Section 4 we consider a family of densities {pi} weighted by λi, and a density q

. We use the Bayes estimator

This is the Bayes estimator for the loss function

We consider Borel probability measures P and Q on a Polish space X. For a convex function f such that f(1)=0, define the f-divergence from P to Q, via densities p for P and q for Q with respect to a common reference measure μ as

We note that this representation is independent of μ, and such a reference measure always exists, take μ=P+Q for example.

. For a random variable

X and a set A we denote the probability that X take a value in A by P(X∈A), the expectation of the random variable by EX

and the variance by

Var(X)\coloneqqE|X−EX|2. For a probability measure μ satisfying μ(A)=P(X∈A) for all Borel A, we write X∼μ

, and when there exists a probability density function such that

For example, when f is twice differentiable, (4) is equivalent to f′′(x)≥κ for x∈K. Note that the case κ=0 is just usual convexity.

Observe that it is enough to prove the result when κ=0, where the proposition is reduced to the classical result for convex functions. ∎

The table below lists some κ-convex f-divergences of interest to this article.

Observe that we have taken the normalization convention on the total variation, which we denote by |P−Q|TV, such that |P−Q|TV=supA|P(A)−Q(A)|≤1. Also note, the α

The next lemma is a restatement of Jensen’s inequality.

If f is κ-convex on the range of X,

The following result shows that every strongly convex divergence can be lower bounded, up to its convexity constant κ>0, by the χ2-divergence.

For a κ-convex function f,

The above proof uses a pointwise inequality between convex functions to derive an inequality between their respective divergences. This simple technique was shown to have useful implications by Sason and Verdú in [19], where it appears as Theorem 1, and was used to give sharp comparisons in several f-divergence inequalities.

For divergences defined by g and f with cf(t)≥g(t) for all t, then

For a smooth κ-convex divergence f, the inequality

is sharp multiplicatively in the sense that

Observe that after two applications of L’Hospital,

In particular when Qθ=Q for all θ

By Jensen’s inequality, as in Lemma 2.4

Inserting these equalities into (15) gives the result. To obtain the total variation bound one needs only to apply Jensen’s inequality,

The next result shows that for f strongly convex, Pinsker type inequalities can never be reversed,

Given f strongly convex and M>0, there exists P, Q measures such that

In fact, building on the work of [3, 12], Sason and Verdu proved in [19], that for any f divergence, supP≠QDf(P||Q)|P−Q|TV=f(0)+f∗(0). Thus, an f-divergence can be bounded above by a constant multiple of a the total variation, if and only if f(0)+f∗(0)<∞. From this perspective, Proposition 2.8 is simply the obvious fact that strongly convex functions have super linear (at least quadratic) growth at infinity.

Moreover as mentioned in the introduction, skewing imposes boundedness of the Radon-Nikodym derivative dPdQ, which allows us to constrain the domain of f-divergences and leverage κ-convexity to obtain f-divergence inequalities in this section.

The following appears as Theorem III.1 in the preprint [14]. It states that skewing an f-divergence preserves its status as such. This guarantees that the generalized skew divergences of this section are indeed f-divergences. A proof is given in the appendix for the convenience of the reader.

is an f-divergence if Df is.

For an f-divergence, its skew symmetrization,

Δf is determined by the convex function

Observe that Δf(P||Q)=Δf(Q||P), and when f(0)<∞, Δf(P||Q)≤supx∈[0,2]f(x)<∞ for all P,Q since dPd(P+Q)/2, dQd(P+Q)/2≤2. When f(x)=xlogx, the relative entropy’s skew symmetrization is the Jensen-Shannon divergence. When f(x)=(x−1)2 up to a normalization constant the χ2-divergence’s skew symmetrization is the Vincze-Le Cam divergence which we state below for emphasis. See [21] for more background on this divergence, where it is referred to as the triangular discrimination.

If one denotes the skew symmetrization of the χ2-divergence by Δχ2, one can compute easily from (24) that Δχ2(P||Q)=Δ(P||Q)/2. We note that although skewing preserves 0-conexity, by the above example, it does not preserve κ-convexity in general. The skew symmetrization of the χ2-divergence a 2-convex divergence while f(t)=(t−1)2/(t+1) corresponding to the Vincze-Le Cam divergence satisfies f′′(t)=8(t+1)3, which cannot be bounded away from zero on (0,∞).

with equality when the f(t)=(t−1)2 corresponding the the χ2-divergence, where Δf denotes the skew symmetrized divergence associated to f and Δ is the Vincze- Le Cam divergence.

We will now investigate more general, non-symmetric skewing in what follows.

We will need the following lemma originally proved by Audenart in the quantum setting [2]. It is based on a diffential relationship between the skew divergence [10] and the [8], see [13, 16].

where the inequality follows from Lemma 3.5. Following the same argument for α>β, so that C(α)=α, D∞(α||β)=logαβ, and

for t=βα completes the proof. Indeed,

We recover the classical bound [11, 21] of the Jensen-Shannon divergence by the total variation.

For probability measure P and Q,

Proposition 3.4 gives a sharpening of Lemma 1 of Neilsen [15] who proved Sα,β(P||Q)≤D∞(α||β), and used the result to establish the boundedness of a generalization of the Jensen-Shannon Divergence.

Note that since ¯αi is the w average of the αj terms with αi removed, ¯αi∈[0,1] and thus A≤1. We will need the following Theorem from [14] for the upper bound.

For fi densities with respect to a common reference measure γ, and λi>0 such that ∑ni=1λi=1,

We apply Theorem 3.3 with fi=(1−αi)p+αiq, λi=wi, and noticing that in general

It remains to determine T=maxi|fi−~fi|TV,

Thus T=maxi(αi−¯αi)|p−q|TV=A|p−q|TV, and the proof of the upper bound is complete.

To prove the lower bound, we apply Pinsker’s inequality, 2loge|P−Q|2</