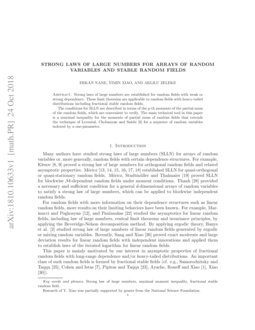 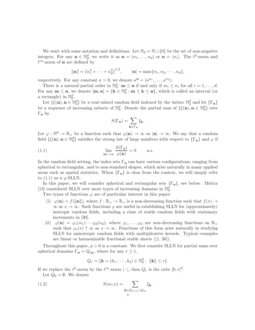 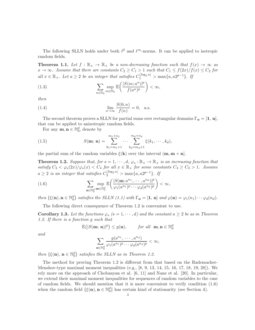 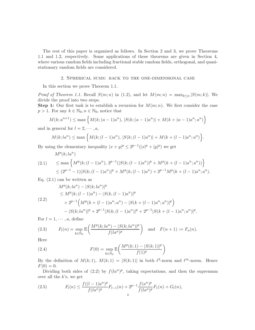 For random fields with more information on their dependence structures such as linear random fields, more results on their limiting behaviors have been known. For example, Marinucci and Poghosyan [12], and Paulauskas [22]

This paper is mainly motivated by our interest in asymptotic properties of fractional random fields with long-range dependence and/or heavy-tailed distributions. An important class of such random fields is formed by fractional stable fields (cf. e.g., Samorodnitsky and Taqqu [25], Cohen and Istas [7], Pipiras and Taqqu [23], Ayache, Roueff and Xiao [1], Xiao [30]).

We start with some notation and definitions. Let N0=N∪{0} be the set of non-negative integers. For any n∈Nd0, we write it as n=(n1,…,nd) or n=⟨ni⟩. The ℓ2-norm and ℓ∞-norm of n are defined by

Let {ξ(n),n∈Nd0} be a real-valued random field indexed by the lattice Nd0 and let {Γn} be a sequence of increasing subsets of Nd0. Denote the partial sum of {ξ(n),n∈Nd0} over Γn by

In the random field setting, the index sets Γn can have various configurations, ranging from spherical to rectangular, and to non-standard shapes, which arise naturally in many applied areas such as spatial statistics. When {Γn} is clear from the context, we will simply refer to (1.1) as a φ-SLLN.

In this paper, we will consider spherical and rectangular sets {Γn}, see below. Móricz [13] considered SLLN over more types of increasing domains in Nd0.

Two types of functions φ are of particular interest in this paper:

Throughout this paper, p>0 is a constant. We first consider SLLN for partial sums over spherical domains Γn=Q|n|, where for any r≥1,

The following SLLN holds under both ℓ2 and ℓ∞-norms. It can be applied to isotropic random fields.

The second theorem proves a SLLN for partial sums over rectangular domains Γn=[1,n], that can be applied to anisotropic random fields.

the partial sum of the random variables ξ(k) over the interval (m,m+n].

The following direct consequence of Theorem 1.2 is convenient to use.

The rest of this paper is organized as follows. In Section 2 and 3, we prove Theorems 1.1 and 1.2, respectively. Some applications of these theorems are given in Section 4, where various random fields including fractional stable random fields, orthogonal, and quasi-stationary random fields are considered.

2. Spherical sums: back to the one-dimensional case

In this section we prove Theorem 1.1.

Step 1: Our first task is to establish a recursion for M(m;n). We first consider the case p>1. For any k∈N0,n∈N0, notice that

Dividing both sides of (2.2) by f(lan)p, taking expectations, and then the supremum over all the k’s, we get

The terms in Gl(n) contribute nicely in the recursion for F(n) because of the following observation. By the assumption, we have

It follows from this and (2.7) that almost surely

Now by the assumption on f,

This finishes the proof of Theorem 1.1 in the case p>1. The case 0<p≤1 follows similarly and we omit the details. ∎

In this section we prove Theorem 1.2. We first state a random field version of the Toeplitz Lemma from Móricz [13]. It will play a crucial role in the proof of Theorem 1.2.

Let {w(m;k),m,k∈Nd0} be a set of non-negative numbers with the following two properties: There is a finite constant C such that

By iterating the above inequality, we derive

Dividing both sides by φ1(an1+1)p⋯φd(and+1)p, taking expectations and then the supremum over m∈N0 we get,

Thus we get the recursion formula for Fd,d−1:

Summing this recursion over n∈Nd0, we get

With essentially the same argument as above we get for s=1,⋯,d−1 that

The next lemma establishes a maximal moment inequality for p>1.