Strong Converse for Testing Against Independence over a Noisy channel

A distributed binary hypothesis testing (HT) problem over a noisy channel studied previously by the authors is investigated from the perspective of the strong converse property. It was shown by Ahlswede and Csiszár that a strong converse holds in the above setting when the channel is rate-limited and noiseless. Motivated by this observation, we show that the strong converse continues to hold in the noisy channel setting for a special case of HT known as testing against independence (TAI). The proof utilizes the blowing up lemma and the recent change of measure technique of Tyagi and Watanabe as the key tools. 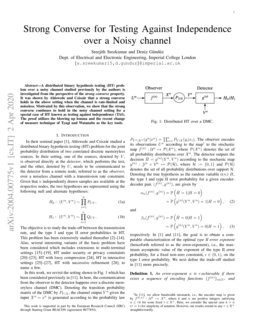 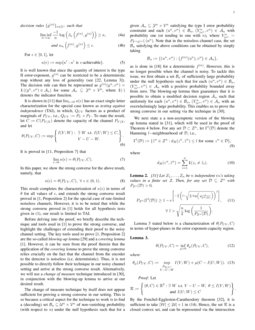 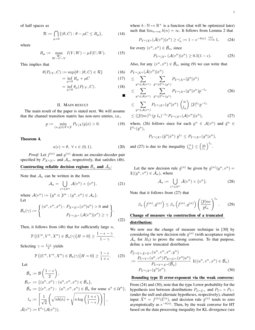 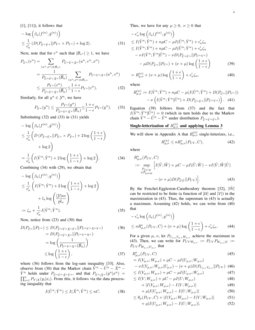 Strong Converse for Hypothesis Testing Against Independence Over A Noisy Channel

We revisit the hypothesis testing problem against independence over a no...
Daming Cao, et al. ∙

Hypothesis Testing with Privacy Constraints Over A Noisy Channel

We consider a hypothesis testing problem with privacy constraints over a...
Lin Zhou, et al. ∙

Optional Stopping with Bayes Factors: a categorization and extension of folklore results, with an application to invariant situations

The main contribution of this paper is a strong converse result for K-ho...
Mustapha Hamad, et al. ∙

††This work is supported in part by the European Research Council (ERC) through Starting Grant BEACON (agreement #677854).

In their seminal paper [1]

, Ahlswede and Csiszár studied a distributed binary hypothesis testing (HT) problem for the joint probability distribution of two correlated discrete memoryless sources. In their setting, one of the sources, denoted by

V, is observed directly at the detector, which performs the test, and the other, denoted by U, needs to be communicated to the detector from a remote node, referred to as the observer, over a noiseless channel with a transmission rate constraint. Given that n independently drawn samples are available at the respective nodes, the two hypotheses are represented using the following null and alternate hypotheses:

The objective is to study the trade-off between the transmission rate, and the type I and type II error probabilities in HT. This problem has been extensively studied thereafter

In this work, we revisit the setting shown in Fig. 1 which has been considered previously in [11]. In here, the communication from the observer to the detector happens over a discrete memoryless channel (DMC). Denoting the transition probability matrix of the DMC by PY|X, the channel output Yn given the input Xn=xn is generated according to the probability law PYn|Xn(yn|xn)=∏ni=1PY|X(yi|xi). The observer encodes its observations Un according to the map111In [11], we allow bandwidth mismatch, i.e., the encoder map is given by f(k,n):Uk↦Xn, where k and n are positive integers satisfying n≤τk for some fixed τ∈R+. Here, we consider the special case k=n (τ=1) for simplicity of notation. However, our results extend to any τ∈R+ straightforwardly. to the stochastic map f(n):Un↦P(Xn), where P(Xn) denotes the set of all probability distributions over Xn. The detector outputs the decision ^H=g(n)(Yn,Vn) according to the stochastic map g(n):Yn×Vn↦P(^H), where H:={0,1} and P(^H) denotes the set of all probability distributions over support H

. Denoting the true hypothesis as the random variable (r.v.)

H, the type I and type II error probability for a given encoder-decoder pair, (f(n),g(n)), are given by

respectively. In [1] and [11], the goal is to obtain a computable characterization of the optimal type II error exponent (henceforth referred to as the error-exponent), i.e., the maximum asymptotic value of the exponent of the type II error probability, for a fixed non-zero constraint, ϵ∈(0,1)

, on the type I error probability. We next define the trade-off studied in

It is well known that since the quantity of interest is the type II error-exponent, g(n) can be restricted to be a deterministic map without any loss of generality (see [22, Lemma 3]). The decision rule can then be represented as g(n)(yn,vn)=1((yn,vn)∈An) for some An⊆Yn×Vn, where 1(⋅) denotes the indicator function.

It is shown in [11] that limϵ→0κ(ϵ) has an exact single-letter characterization for the special case known as testing against independence (TAI), in which, QUV factors as a product of marginals of PUV, i.e., QUV:=PU×PV. To state the result, let C:=C(PY|X) denote the capacity of the channel PY|X, and let

In this paper, we show the strong converse for the above result, namely, that

This result completes the characterization of κ(ϵ) in terms of θ for all values of ϵ, and extends the strong converse result proved in [1, Proposition 2] for the special case of rate-limited noiseless channels. However, it is to be noted that while the strong converse proved in [1] holds for all hypothesis tests given in (1), our result is limited to TAI.

Before delving into the proof, we briefly describe the technique and tools used in [1] to prove the strong converse, and highlight the challenges of extending their proof to the noisy channel setting. The key tools used to prove [1, Proposition 2] are the so-called blowing-up lemma [29] and a covering lemma [1]. However, it can be seen from the proof therein that the application of the covering lemma to prove the strong converse relies crucially on the fact that the channel from the encoder to the detector is noiseless (i.e. deterministic). Thus, it is not possible to directly follow their technique in our noisy channel setting and arrive at the strong converse result. Alternatively, we will use a change of measure technique introduced in [30], in conjunction with the blowing-up lemma to arrive at our desired result.

The change of measure technique by itself does not appear sufficient for proving a strong converse in our setting. This is so because a critical aspect for the technique to work is to find a (decoding) set Bn⊆Un×Vn of non-vanishing probability (with respect to n

) under the null hypothesis such that for a given

An⊆Yn×Vn satisfying the type I error probability constraint and each (un,vn)∈Bn, (Yn|un,vn)∈An with probability one (or tending to one with n), where Yn|un∼PYn|Un(⋅|un). Note that in the noiseless channel case, the set Bn satisfying the above conditions can be obtained by simply taking

as is done in [18] for a deterministic f(n). However, this is no longer possible when the channel is noisy. To tackle this issue, we first obtain a set Bn of sufficiently large probability under the null hypothesis such that for each (un,vn)∈Bn, (Yn|un,vn)∈An with a positive probability bounded away from zero. The blowing-up lemma then guarantees that it is possible to obtain a modified decision region ¯An such that uniformly for each (un,vn)∈Bn, (Yn|un,vn)∈An with an overwhelmingly large probability. This enables us to prove the strong converse in our setting via the technique in [30].

We next state a a non-asymptotic version of the blowing up lemma stated in [31], which will be used in the proof of Theorem 4 below. For any set D⊂Zn, let Γl(D) denote the Hamming l−neighbourhood of D, i.e.,

Lemma 3 stated below is a characterization of θ(PUV,C) in terms of hyper-planes in the error exponent-capacity region.

By the Fenchel-Eggleston-Caratheodory theorem [32], it is sufficient to take |W|≤|U|+1 in (I). Hence, the set R is a closed convex set, and can be represented via the intersection of half spaces as

The main result of the paper is stated next. We will assume that the channel transition matrix has non-zero entries, i.e.,

Let f(n) and g(n) denote an encoder-decoder pair specified by PXn|Un and An, respectively, that satisfies (4b). Constructing reliable decision regions ¯Bn and ¯An: Note that An can be written in the form

Then, it follows from (4b) that for sufficiently large n,

where b:N↦R+ is a function (that will be optimized later) such that limn→∞b(n)=∞. It follows from Lemma 2 that

Note that it follows from (27) that

Bounding type II error-exponent via the weak converse: From (24) and (30), note that the type I error probability for the hypothesis test between distributions P~Un~Vn and PUn×PVn (under the null and alternate hypotheses, respectively), channel input ~Xn=f(n)(~Un), and decision rule ¯g(n) tends to zero asymptotically as e−b(n). Then, by the weak converse for HT based on the data processing inequality for KL divergence (see [1], [11]), it follows that

Similarly, for all yn∈Yn, we have

) that the Markov chain

~Vn−~Un−~Xn−~Yn holds under P~Un~Vn~Xn~Yn, and that P~Yn|~Xn(yn|xn)=∏ni=1PY|X(yi|xi). From this, it follows via the data processing inequality that

Equation (39) follows from (37) and the fact that I(~Vn;~Yn|~Un)=0 (which in turn holds due to the Markov chain ~Vn−~Un−~Yn under distribution P~Un~Vn~Yn). Single-letterization of R(n)μ,ν and applying Lemma 3 We will show in Appendix A that R(n)μ,ν single-letterizes, i.e.,

We next upper bound the second and third terms in (52) similar in spirit to [18]. Note that

Then, we can write that

Denoting the total variation distance between distributions PVμ,νWμ,ν and PVWμ,ν by